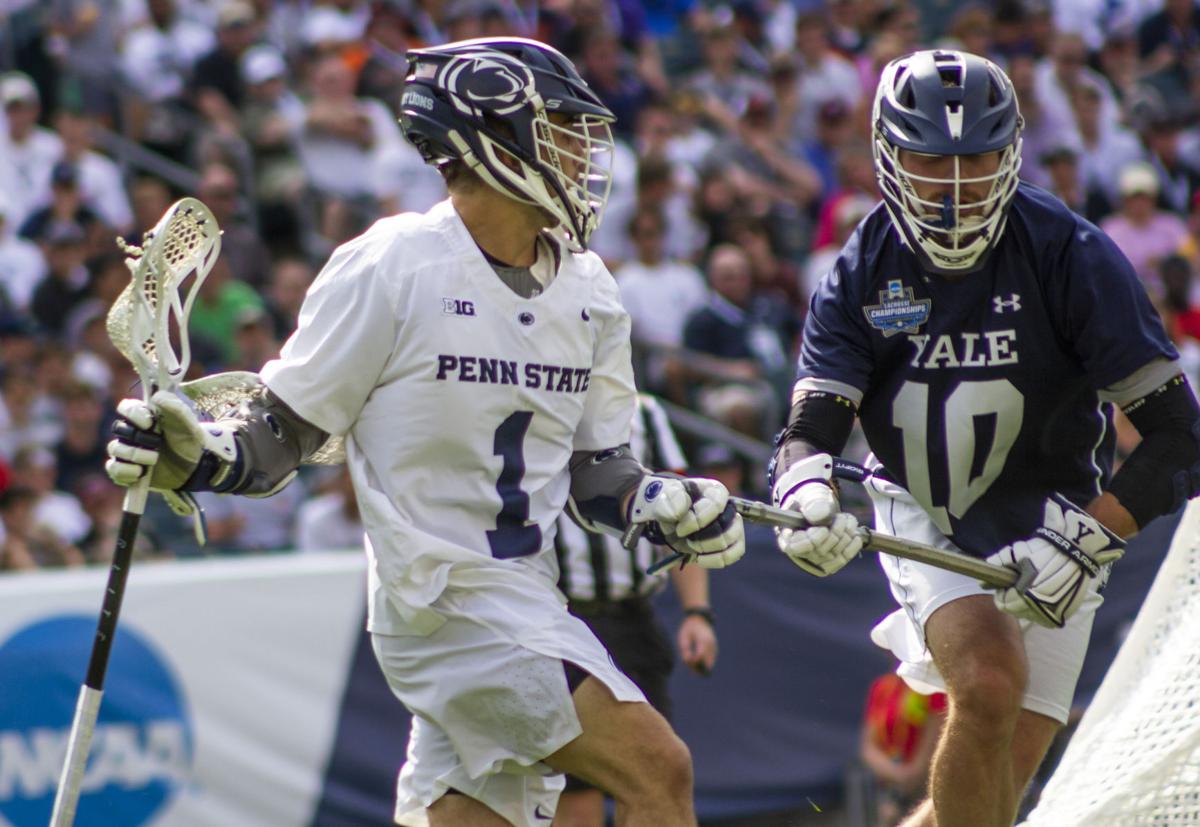 Grant Ament (1) looks to make a pass during the NCAA men’s lacrosse semifinal game against Yale at Lincoln Financial Field in Philadelphia on Saturday, May 25, 2019. The no. 5 Bulldogs defeated the no. 1 seed Nittany Lions 21-17. 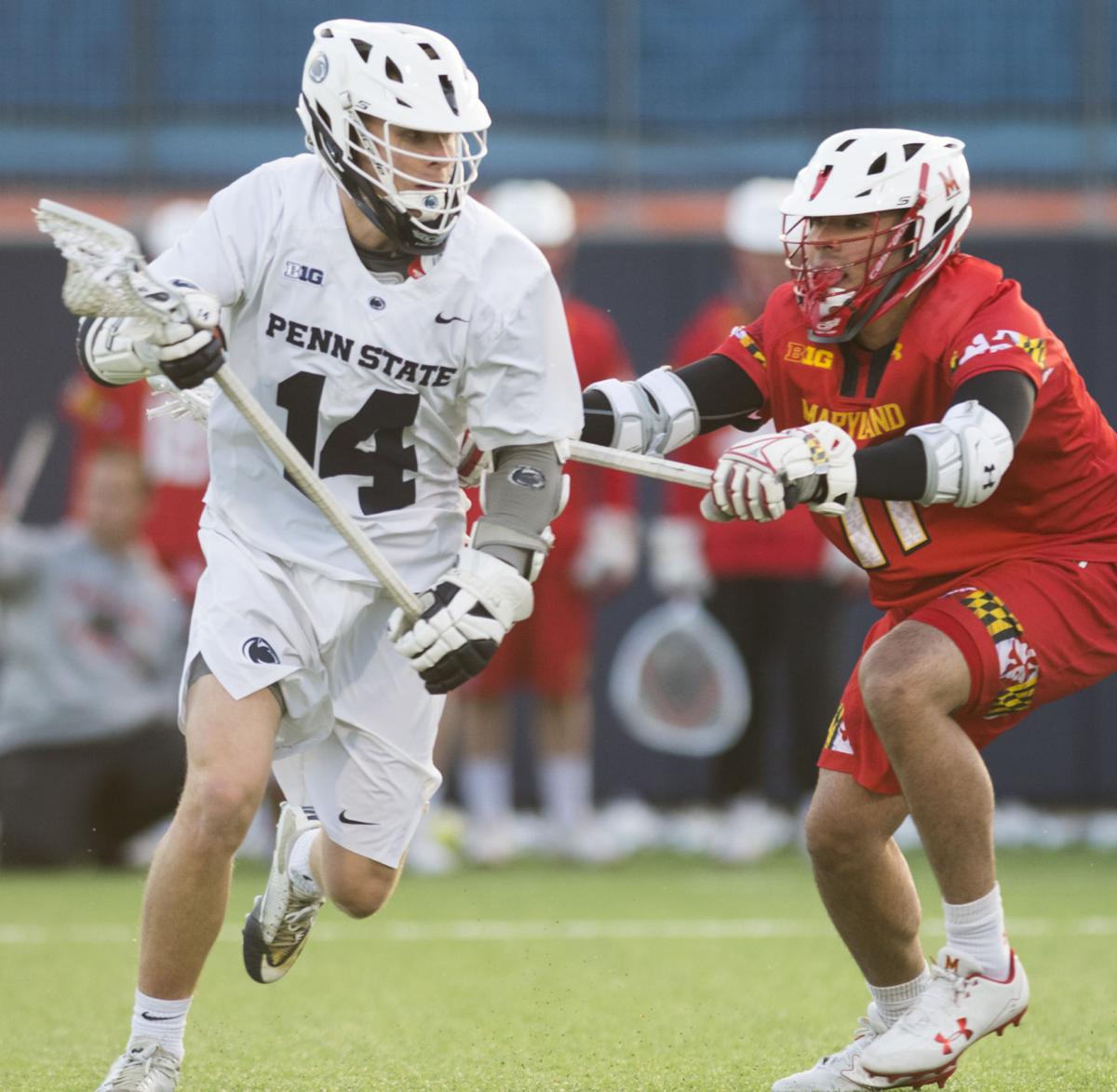 Dylan Foulds (14) moves the ball during the men’s lacrosse game against Maryland at Panzer Field on Sunday, April 8, 2018. The Terrapins defeated the Nittany Lions 13-12.

In 2019, the core group of attackmen was the lifeblood of Penn State’s NCAA Tournament run.

If the Nittany Lions are to live up to the exorbitant expectations that the new campaign brings, expect the approach to be the same.

Penn State will be led by a battle-tested trio of attackmen that will be eyeing a national title as each enters his final season in blue and white.

Arguably the nation’s most prolific player a season ago, Grant Ament has a chance to continue building the already tremendous legacy he has molded at Penn State.

In 2019, Ament returned from a foot injury that forced him to redshirt and proceeded to put together a record-breaking year that silenced any questions about his abilities after missing an entire year of college lacrosse.

Ament set the NCAA record for assists in a season with 96. His 126 total points over the course of the season set a new Big Ten record.

The attackman earned national recognition as a Tewaaraton finalist among other accolades, so his presence is no secret to any team on the Nittany Lions’ schedule in 2020.

Unfortunately for opposing defenses, however, guarding Ament is easier said than done.

Doubling him leaves a shooter open and allows him to do what he does best — finding the open man for an assist. Force him to take the ball to the cage himself and he will create his own shot — just look to Penn State’s first game against Johns Hopkins and Big Ten Tournament matchup with Rutgers for evidence of that.

Ament’s versatility combined with another year of experience should once again see him rise to the very top of college lacrosse.

If Ament is Penn State’s Batman, Mac O’Keefe plays the role of Robin in the Nittany Lion offense.

After a season of being the focal point in 2018, O’Keefe was the biggest beneficiary of Ament’s historic season.

He put up a career-best 78 goals and scored more efficiently than ever before in his college career, accumulating a shooting percentage of 46.4 percent.

Those 78 goals, coupled with his 18 assists, earned him the second-most points on the roster with 96.

Already the program leader in goals with 164, O’Keefe will only further increase his record in 2020.

The Canadian attackman redshirted in his first year with the program and saw minimal action in 2017.

He was forced to step up and produce in 2018 and answered the call, showing an increased comfort level with the pace of the college game while putting up the second-highest point total on the team.

But 2019 was Foulds’ breakout season.

Foulds erupted for 43 goals and 13 assists on the year. He turned in a stellar performance against the likes of Yale in Penn State’s first-ever Final Four appearance, notching a season-high five goals to finish his year on a high note.

With all eyes on Ament and O’Keefe, Foulds could be an X factor for the Nittany Lions’ attack in the coming year.

Aside from the starting lineup, there are a few others who could make an impact as a part of Penn State’s attack.

TJ Malone burst onto the scene as a freshman last season, seeing time in all 18 of the Nittany Lions’ games. The Haverford School product produced 30 goals and six assists on the year.

Malone flexed his versatility last year by moving into a starting spot in Penn State’s midfield, and although he is listed as an attackman, he is a strong candidate to play wherever he is needed in 2020.

Fellow freshmen Jack Traynor and Seamus Glynn find themselves in a similar position to Malone. While each of them took a bit more time to find their groove last year, expect both to contribute right away wherever they are asked to play in the upcoming year.

A freshman to look out for this season is Canyon Birch.

Birch was ranked as Inside Lacrosse’s No. 15 best recruit, the highest-ranked recruit of Penn State’s incoming class of freshmen.

In his senior season at Manasquan High School in New Jersey, Birch became the state’s all-time leader in points with 558 and goals with 392. He led his team to three state titles in his time in high school.

Penn State’s attack is certainly crowded with talent, but it wouldn’t come as a surprise if coach Jeff Tambroni gives Birch time to see what he has to look forward to in the future.

Penn State men's lacrosse preview: Everything you need to know as the Nittany Lions kick off their season

Penn State men’s lacrosse is starting from the top this season as it tries to follow up the best year in program history.

Former Penn State defensive end Daniel Joseph has announced that he is transferring to NC State on Twitter.