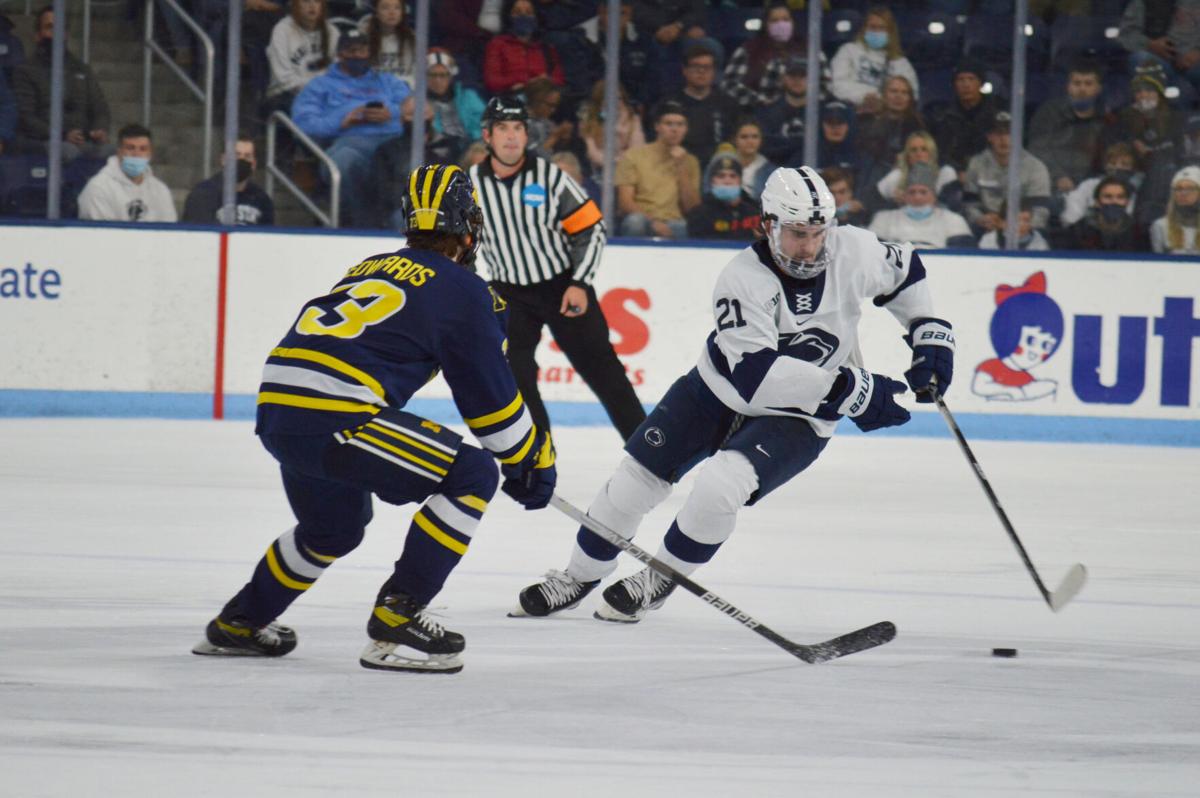 Foward Kevin Wall (21) during the Penn State men’s hockey game against Michigan at the Pegula Ice Arena on Thursday, Nov. 11, 2021 in University Park, Pa. The Nittany Lions lost to the Wolverines 5-1. 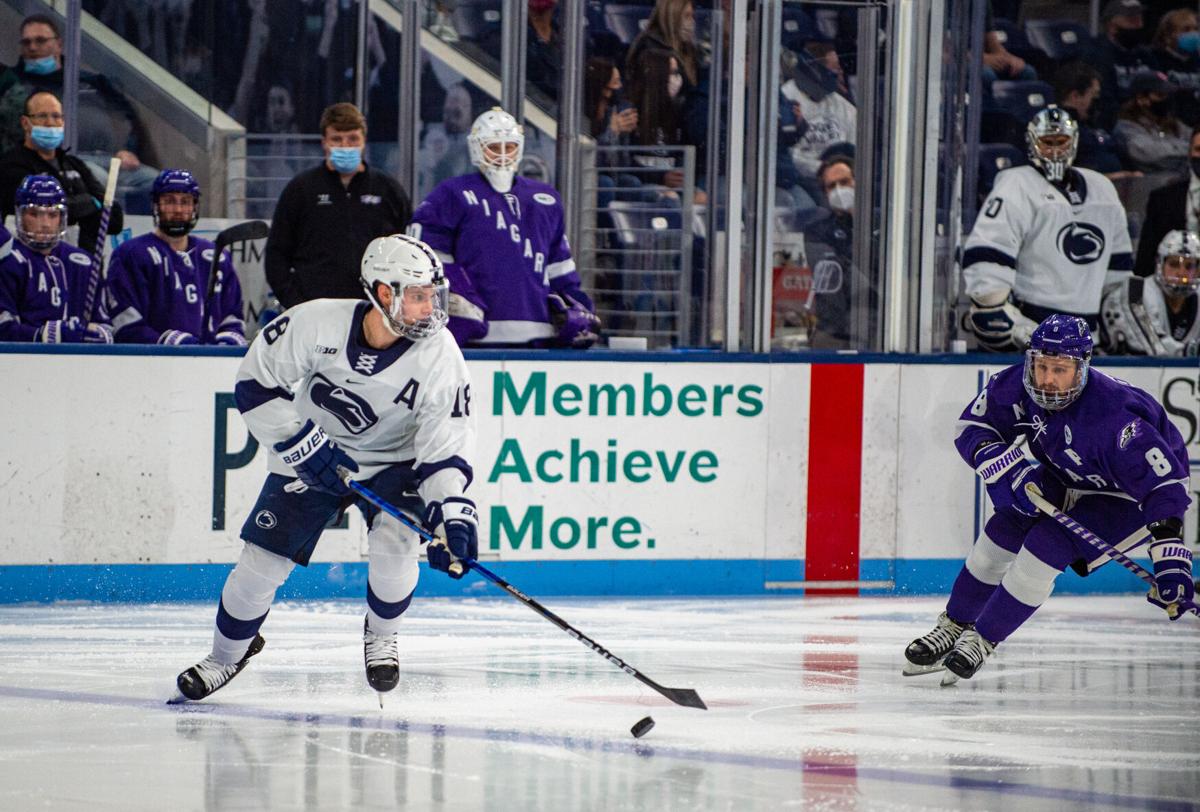 Peppering the opposition’s goalie is never a problem for Penn State.

Take it from Michigan coach Mel Pearson, who is in his fifth year leading the Wolverines’ program. Pearson guided the maize and blue through a 9-5 defeat at the hands of the Nittany Lions nearly a year ago, a contest in which the blue and white totaled 43 shots.

“That’s their M-O, they just shoot from everywhere,” Pearson said. “It’s worked for them. It’s a good strategy, they put a lot of pressure on you, and you have to make sure you’re picking up people.”

For the third time in as many games since Penn State started Big Ten play, the Nittany Lions outshot their opponent. But as in their two road losses to Ohio State last weekend, the blue and white came up short in a 5-1 thumping at the hands of the No. 2 team in the country.

Though the quantity of shots taken on offense hasn’t changed for Penn State, Guy Gadowsky believes his players need to do a better job of getting to the net.

“That’s been pretty much a staple of us for a number of years now,” Gadowsky said. “I don’t think it’s happening nearly at the rate that it has to for us to be successful.”

Fifth-year senior defenseman Clayton Phillips seconded his head coach’s thoughts. The Edina, Minnesota, native has been around many different versions of the blue and white, including the squad that began its season 0-5 last year.

On a similar vein, after a stellar 6-1 start in nonconference play, Penn State is 0-3 in Big Ten play.

During that stretch of six wins in seven attempts, the blue and white was averaging over four goals per game and had four encounters where five or more scores were registered. But in the three-game slide, Penn State has a whopping four goals, including just one in the trio of combined third periods.

“Initially, I think we had a little bit of success. It might have come a little bit easy,” Gadowsky said. “We’ve never been a team that’s scored easily.”

Phillips said getting out of funks, like winless starts in the Big Ten, comes with small starts like winning a period or winning a shift, and then eventually doing so consistently.

But as of right now, that’s not the case for Penn State as it pertains to the offensive end.

However, getting off the schneid against one of the Big Ten’s best goaltenders in 6-foot-6 sophomore netminder Erik Portillo is no easy task, especially with how he was playing Thursday night.

The owner of a 2.09 goals against average and 0.925 save percentage all but blanked Penn State, only allowing one puck to reach twine on a breakaway opportunity when there was much traffic in front of the Michigan crease.

Despite proving incapable of compiling a clean sheet Thursday night, he did the next best thing in throwing a one-hitter.

“Portillo, he made some key saves,” Pearson said. “I liked the way he battled more than anything. We gave up a number of two on one’s, some outnumbered rushes.”

Phillips affirmed Pearson’s comments, acknowledging that Portillo was “really strong” all night. He also commented that defensemen like himself have to do a better job of helping out goalie Oskar Autio, who often found himself in difficult situations.

Based on Thursday night’s results, special teams could also be viewed as a point of emphasis, seeing how the Wolverines had a healthy 50% conversion rate while Penn State’s was a donut.

In addition to scoring when all things are equal, Phillips thinks power play units like his own can do more when presented with a man advantage.

“We really got to start getting shots and traffic to the net and kind of being a spark plug,” Phillips said. “It doesn't mean if we don't score we did a bad job, but we got to start gaining some momentum for our team.”

Between the offense and the defense, Thursday night wasn’t good enough for Gadowsky. In his words, the team is “not yet” close to putting together a complete game during Big Ten play.

At least from an offensive perspective, much still needs to change for the Nittany Lions to convert the plethora of shots they always accumulate into twine-seeking missiles.

“I don’t think we put in the work consistently,” Gadowsky said. “We shouldn’t be surprised because I don’t think we’re putting the work in that area to generate enough [offense].”