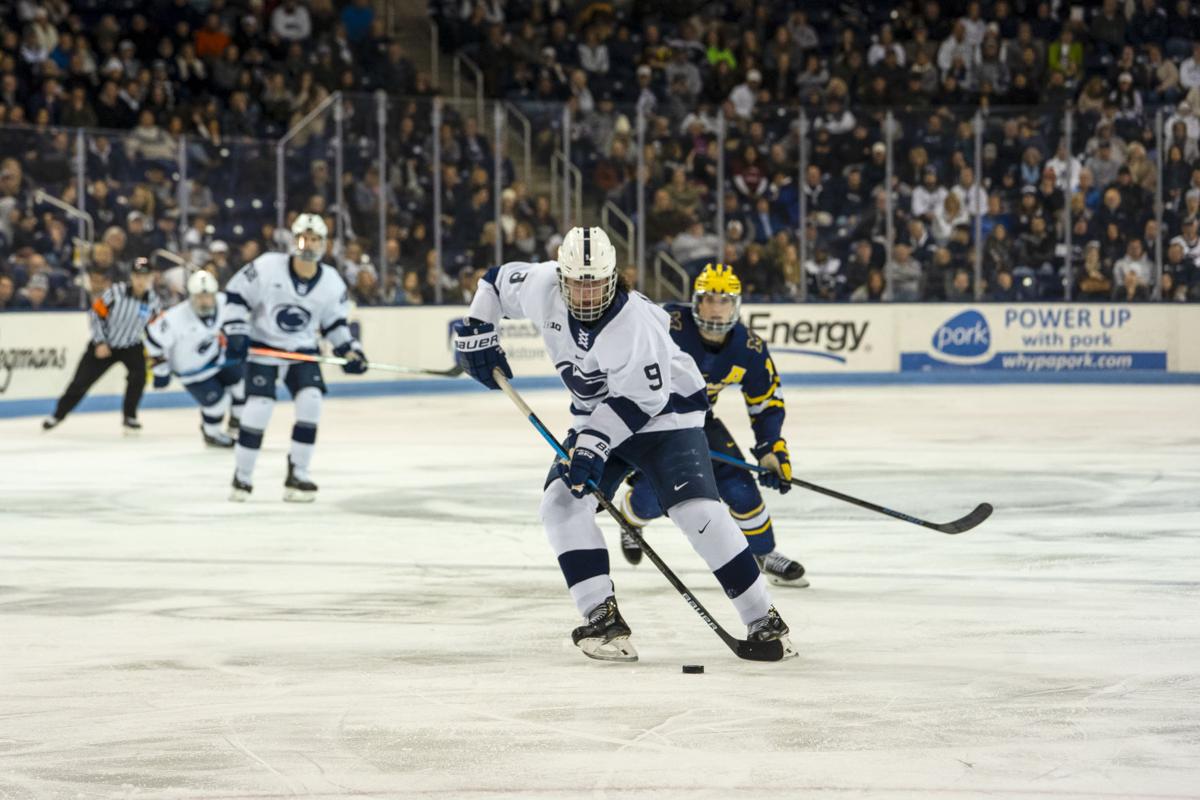 Alex Limoges (9) pushes the puck back towards Michigan goal Friday, January 17, 2020, at the Pegula Ice Arena. 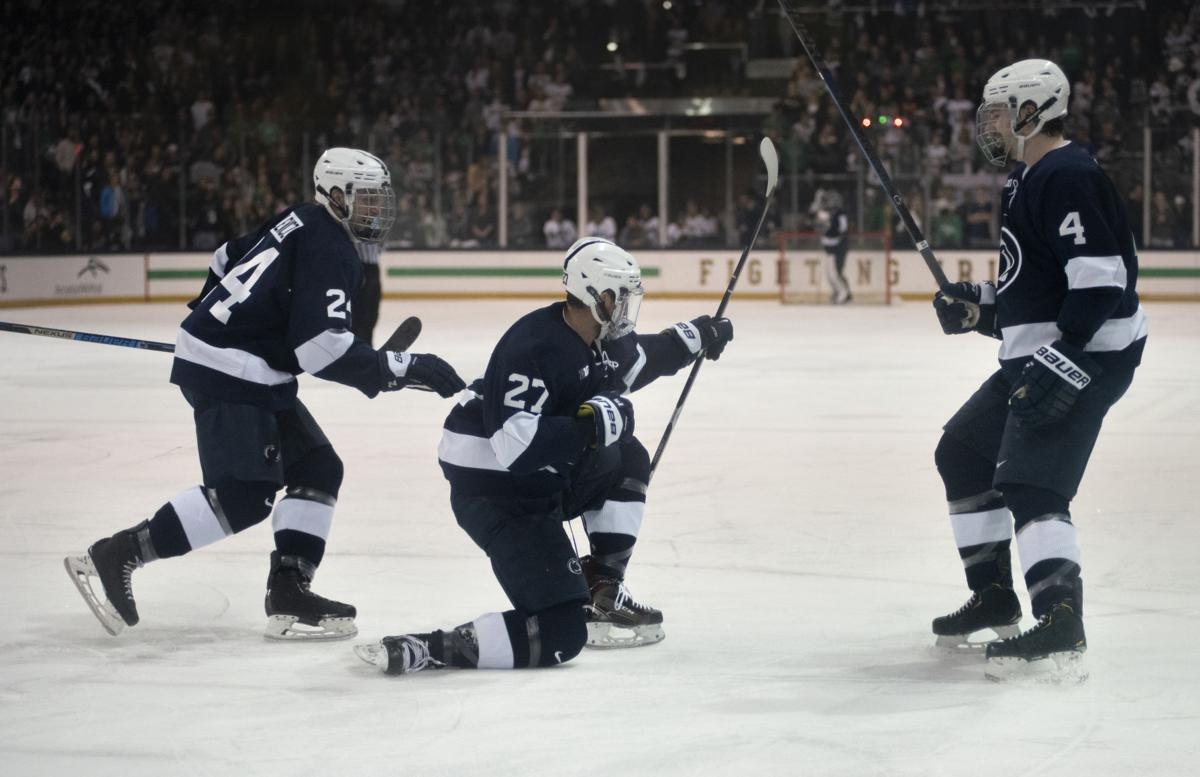 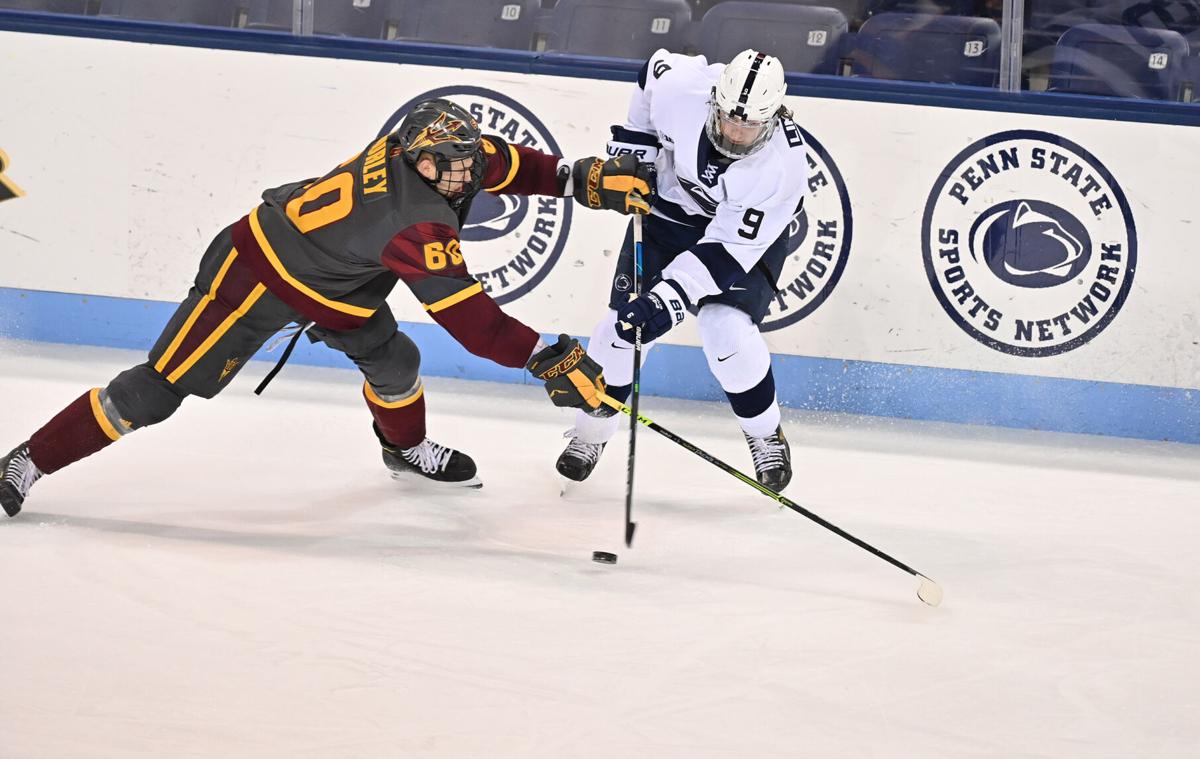 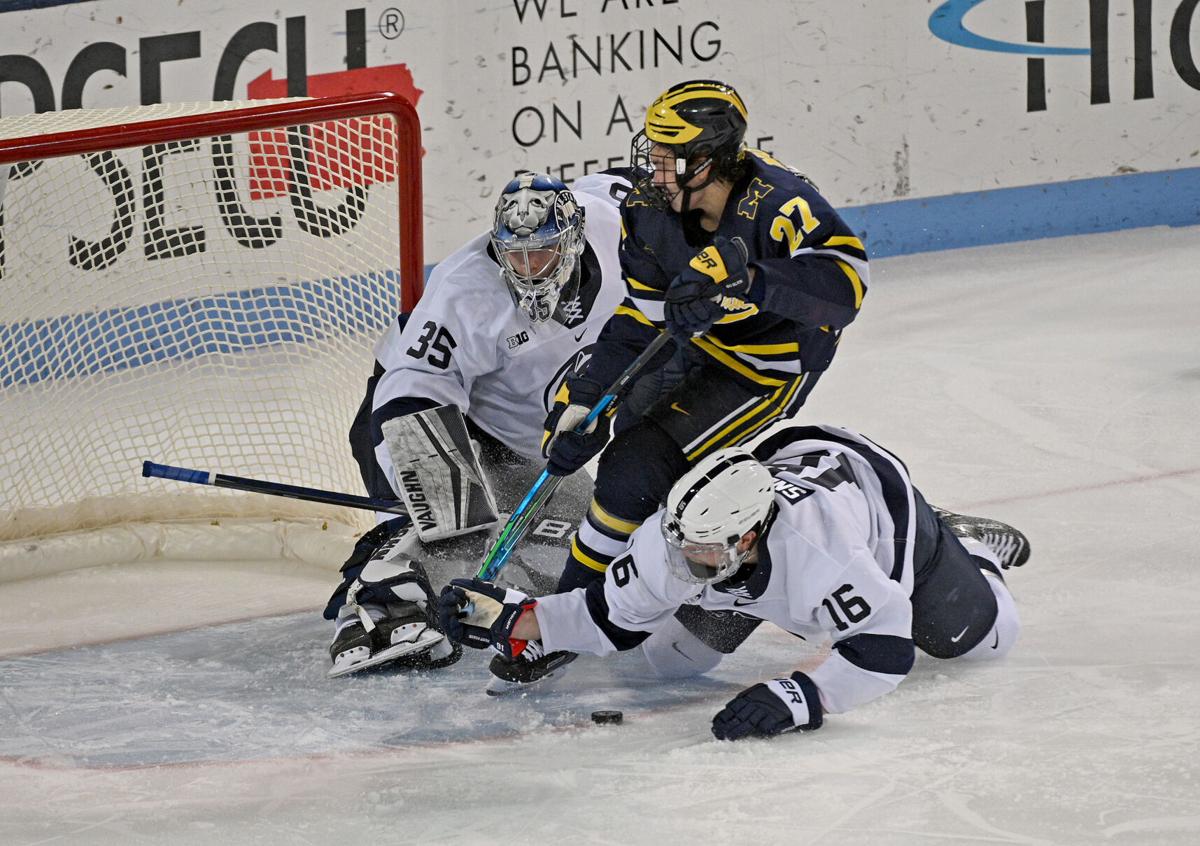 Penn State men's hockey against Michigan in the second period on Dec. 2, 2020. The Nittany Lions fell to No. 7 Michigan, 3-1. Photo/Craig Houtz 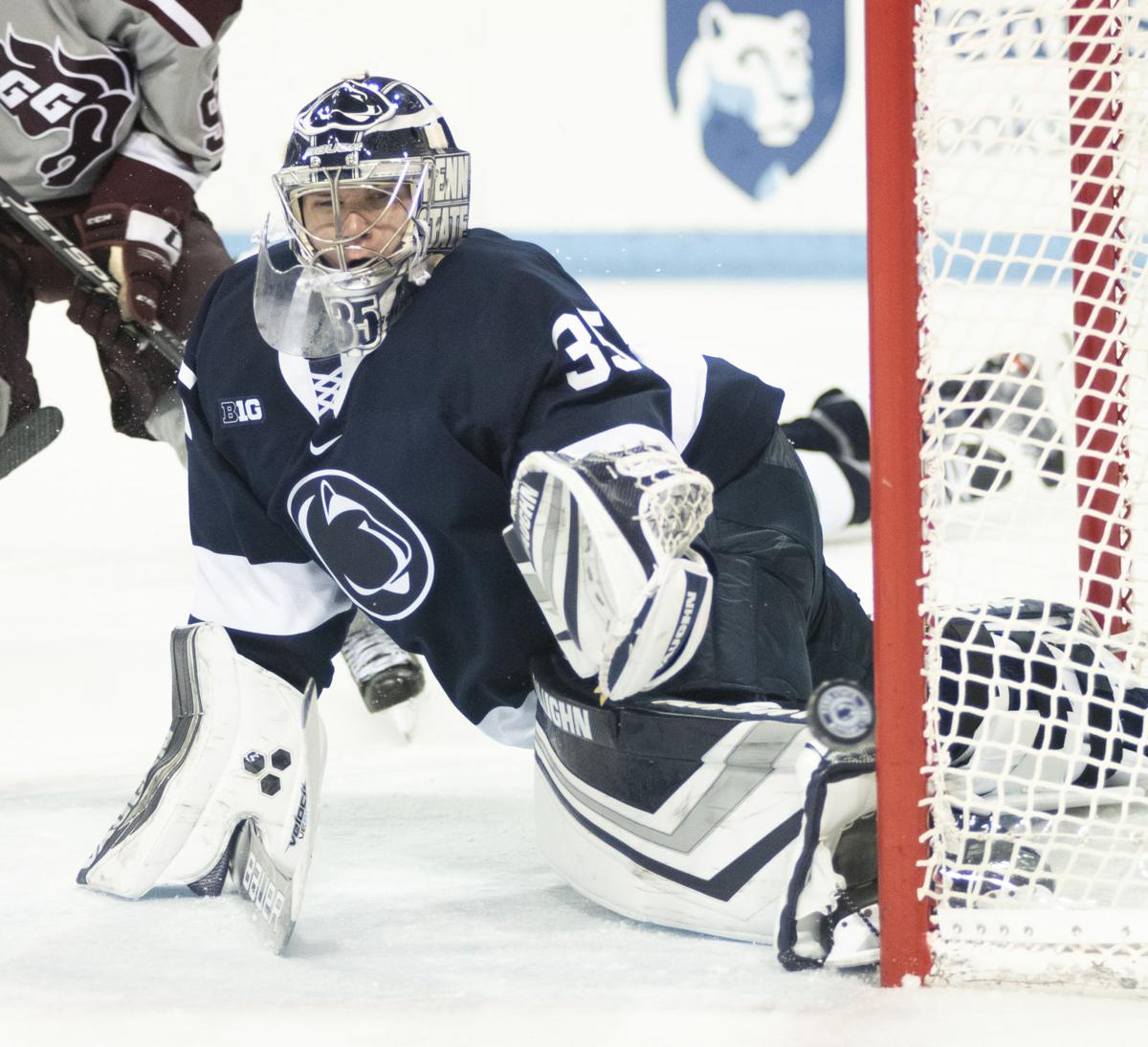 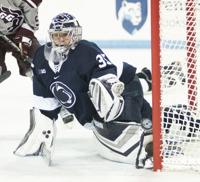 Oskar Autio (35) tries to make a save on a puck that goes wide during the men’s hockey game against the University of Ottawa at the Pegula Ice Arena on Oct. 6, 2019. The Nittany Lions defeated the Gee-Gees, 5-0. 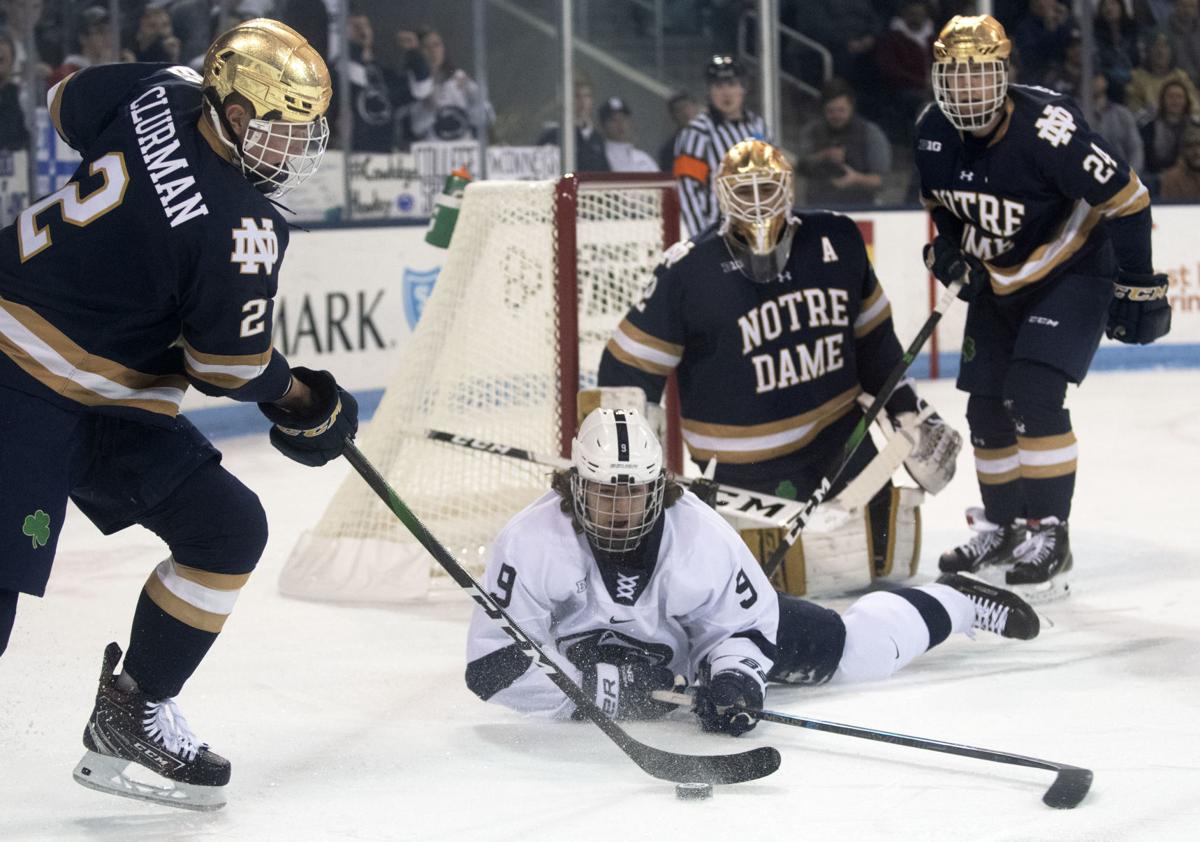 Forward Alex Limoges (9) tries to block Notre Dame’s Nate Clurman (2) as he skates past during the men’s hockey game against Notre Dame in Pegula Ice Arena on Friday, Jan. 31, 2020. Penn State tied Notre Dame 3-3 with the Fighting Irish taking the extra Big Ten point in the seventh round of a shootout.

Alex Limoges (9) pushes the puck back towards Michigan goal Friday, January 17, 2020, at the Pegula Ice Arena.

Penn State men's hockey against Michigan in the second period on Dec. 2, 2020. The Nittany Lions fell to No. 7 Michigan, 3-1. Photo/Craig Houtz

In Canada, professional and collegiate hockey players alike are quick to open up about mental health for at least one day every year.

Among other sports, hockey has been at the forefront of mental health awareness due to Canada’s Bell Let’s Talk Day.

The day, which was recognized on Jan. 28 this year, raises awareness and combats stigmas surrounding mental health.

For every interaction on social media — whether it be a view of a video the company puts out, a tweet with #BellLetsTalk or a retweet of a tweet containing that hashtag, among other things — five cents is donated to Canadian mental health initiatives. This year, nearly $8 million dollars have been raised for the cause.

Many Penn State players participated in the movement, including Americans Paul DeNaples and Christian Sarlo.

But little did they know their own mental health would soon be put to the test, when the Nittany Lions were shut down because of a positive coronavirus test within the program in early February.

It would be nearly a month until the Nittany Lions reemerged from their hiatus to once again take the ice and return to some semblance of current-day normalcy.

However, a month of being isolated from the outside world made Penn State more conscious than ever of the team’s mental well-being.

Players leaned on and rallied around their teammates, coaches checked in and the team tried to find some kind of positive light in an otherwise dark, bleak time for the squad.

The importance of camaraderie shone through during the blue and white’s layoff, as Guy Gadowsky said teammates turned to one another when they needed their help most.

“I think they were very supportive of each other,” Gadowsky said. “It wasn’t one guy going through anything alone. They had plenty of emotional support.”

Some of that emotional support came from Gadowsky himself. He checked in on his team multiple times throughout the break to make sure they were doing their best to stay positive during a difficult time.

Even with resources like teammates to receive help from, sometimes an unexpected shred of positivity can go a long way. Despite all the chaos that was swirling around the team, there was a beam of light and energy cast onto the Nittany Lions during their shutdown.

Senior Adam Pilewicz was able to participate in the entirety of THON this year, something the school’s men’s and women’s hockey players don’t typically get a chance to do since the 46-hour dance marathon occurs midseason.

A senior like Pilewicz, Penn State captain and forward Alex Limoges could hardly contain his admiration for his teammate.

“[THON] has been something hockey players have wanted to be a part of for a while,” Limoges said. “It inspired me, it motivated me to be better. I know everybody in the locker room is so proud of him.”

Some of the team was even able to gather with Pilewicz in person to support him as he danced to battle childhood cancer.

Gadowsky raved about how great an event THON is, but also how it helped his team push through the admittedly difficult time it was going through.

“It’s so special,” Gadowsky said. “I think it’s a great thing at any time, especially during the pause we had.”

Aside from the obvious toll a month of isolation can take, the daily grind of a hockey season is not easy for any player both physically or mentally.

To gain an edge, the players believe cerebral fortitude is of the utmost importance. Mental sharpness is one of the biggest tools in the game, and junior netminder Oskar Autio puts a priority on how he approaches the game between his ears.

“I talk a lot with our sports psychologist,” Autio said. “The stuff I focus on are relaxation and mental preparation before the game.”

Autio said he is fortunate to have people in his corner he can lean on when he needs to.

He credited a lot of the goalie coaches he’s been able to work with throughout his career, including those from his home of Espoo, Finland, and Chicago, where he played juniors for the Chicago Steel.

“I definitely feel like I have a lot of people that support me, and it's definitely helped me a lot,” Autio said.

Now with the break over, the Nittany Lions can once again focus more of their attention to hockey and, in particular, the upcoming Big Ten Tournament.

The prospect of getting back onto the ice is a shot of positivity into the arms of Nittany Lions who surely could use one after being cooped up for such a long period of time.

Zech Lambert is a junior majoring in broadcast journalism with a minor in sports studies. He currently covers the men's hockey team for The Daily Collegian.