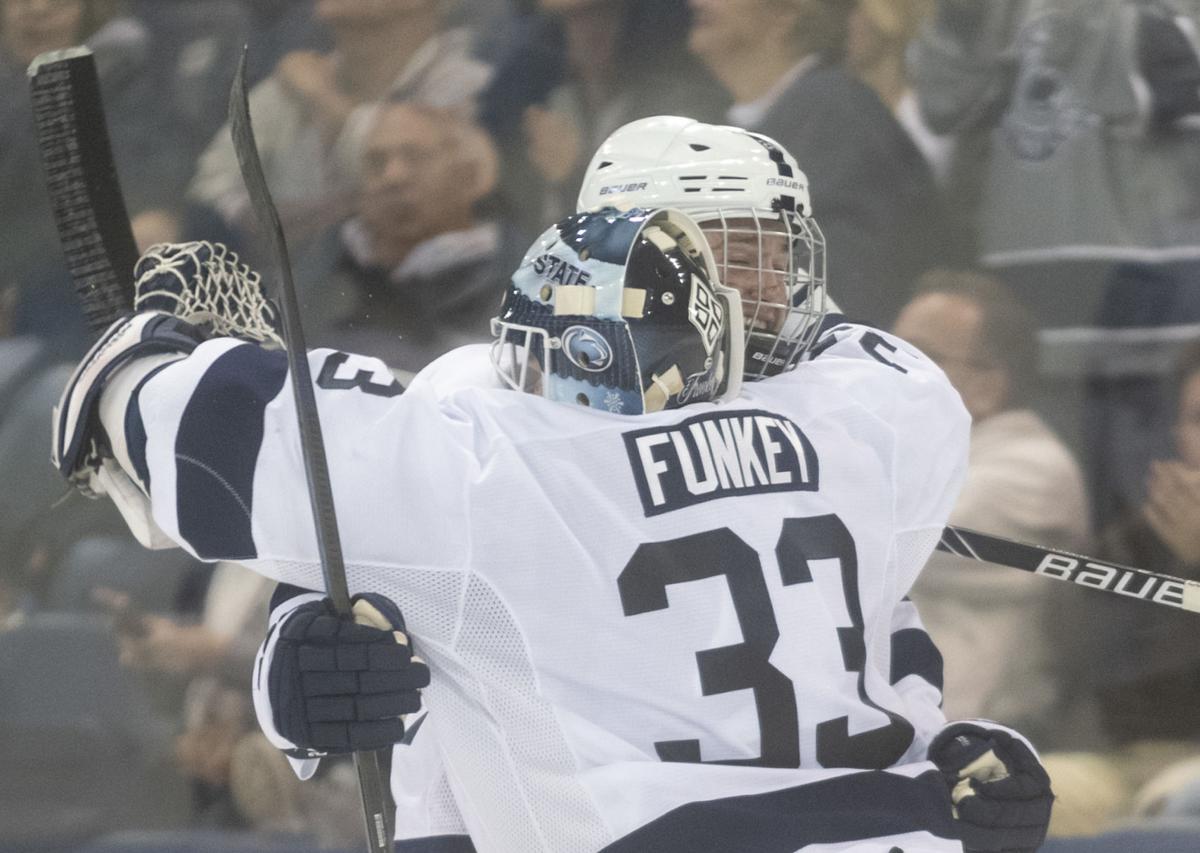 Penn State goaltender Chris Funkey (33) hugs Adam Pilewicz (24) after Pilewicz scored his first goal of his collegiate career during the men’s hockey game against Niagara on Friday, Oct. 19, 2018. The no. 10 Nittany Lions defeated the Purple Eagles 8-2. 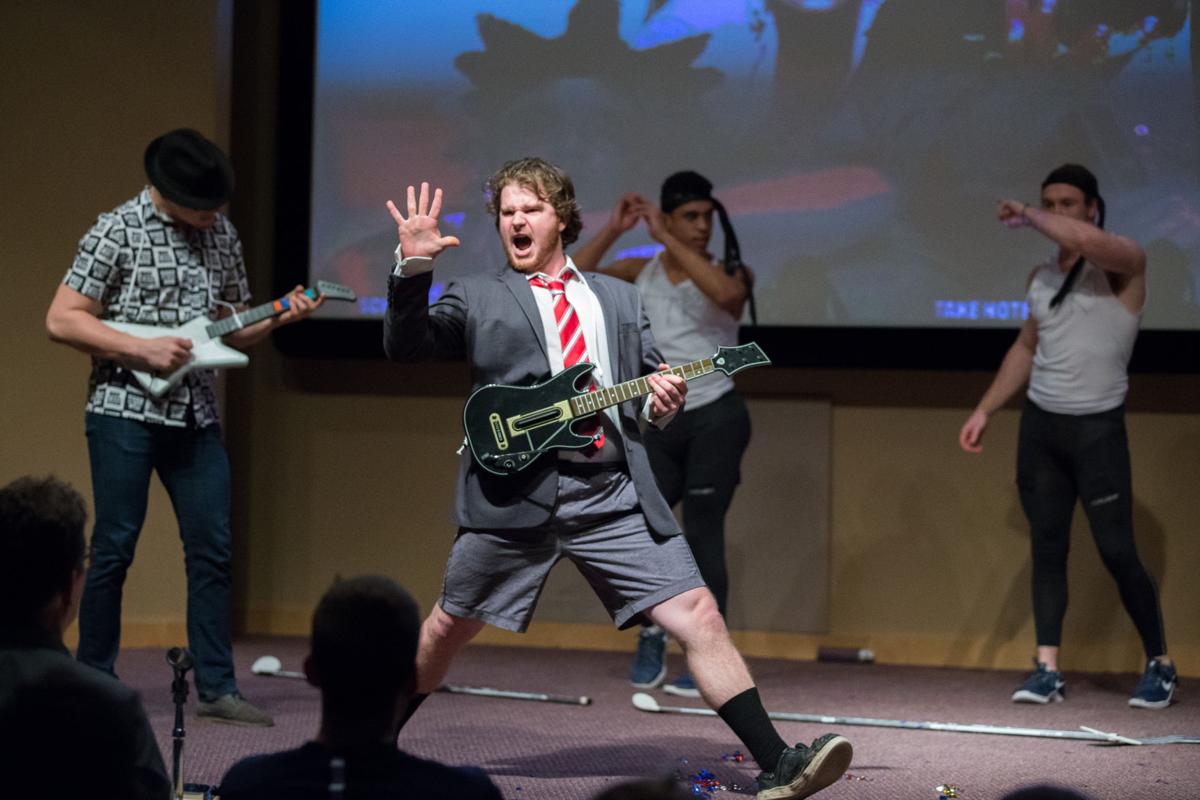 Goalie Chris Funkey, of the men's hockey team, performs as Jack Black's character in School House of Rock alongside his teammates to "Zach's Song from School Rock" during the 2nd Annual SAAB Lip Sync Battle to benefit THON in Freeman Auditorium of the HUB-Robeson Center on Wednesday, Jan. 25, 2017. 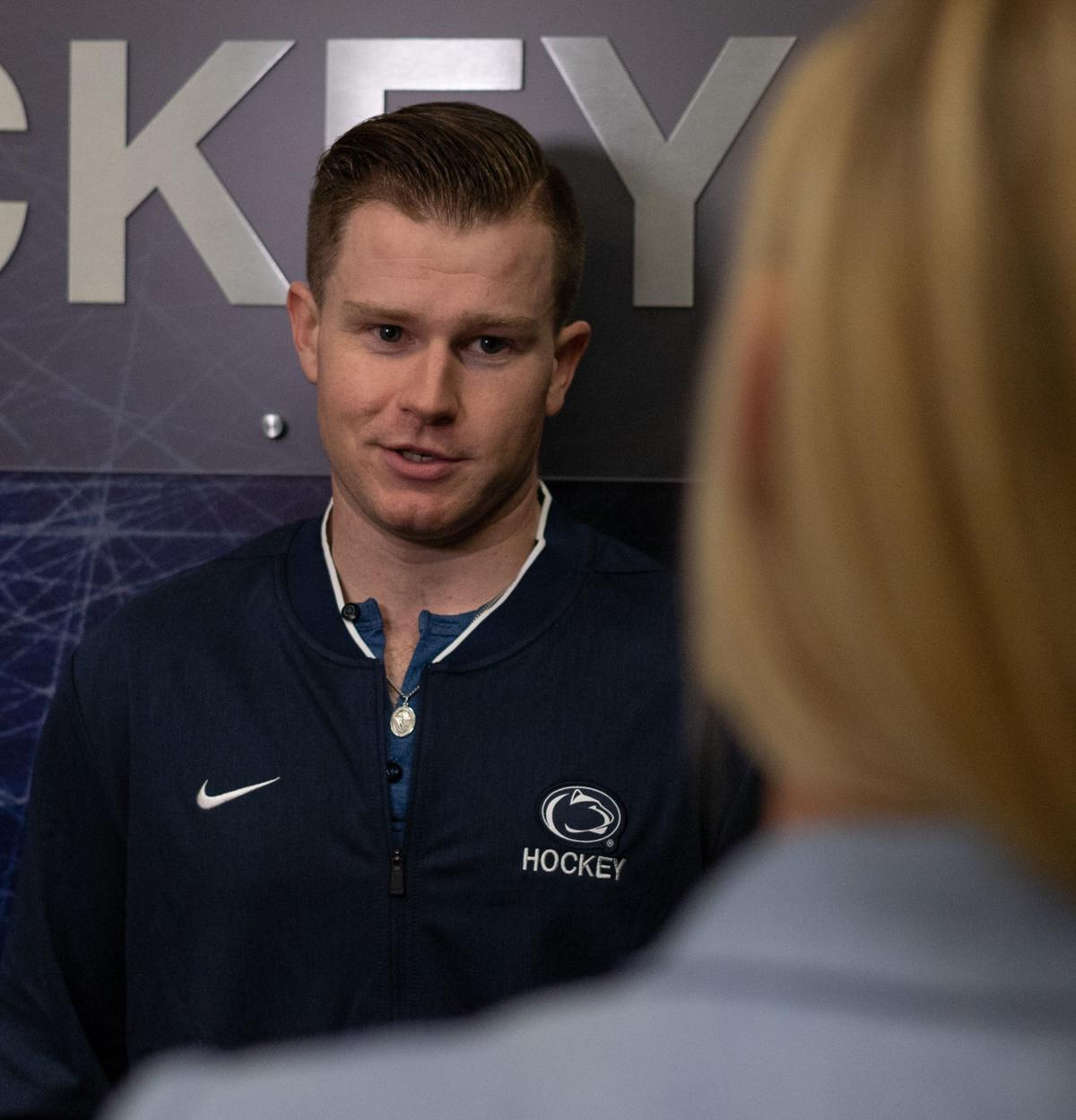 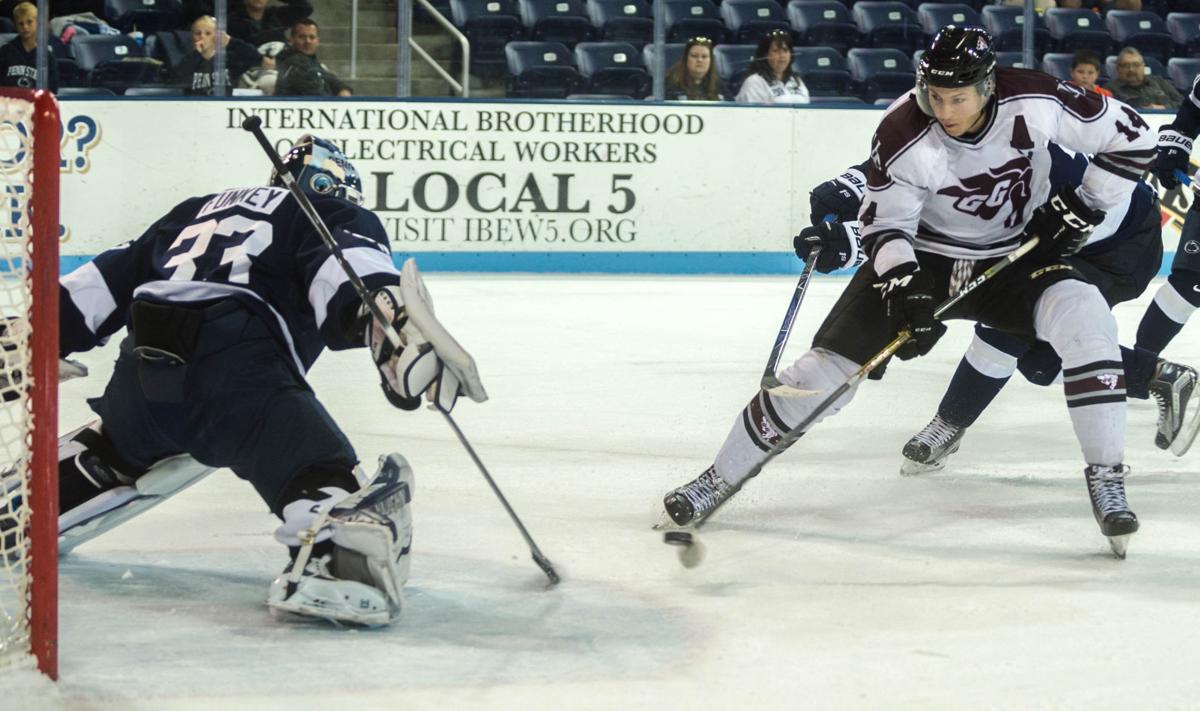 Ottawa forward Quinn O'brien (14) shoots the puck past goalie Chris Funkey (33) to score the game-winning goal in overtime during their game at Pegula Ice Arena on Sunday, Oct. 1, 2017. No. 10 Penn State lost 3-4.

For four years, whenever Chris Funkey got ready for a game, he put on a goalie mask.

Now, the former Penn State netminder has traded in his mask for a different piece of headwear — a broadcasting headset.

However, his path to the broadcast booth was far from a normal one — some may even say it was… funky.

Upon graduating from Penn State, Funkey received a degree in finance, which he used to land a job at Lord, Abbett & Company.

It was actually his hockey team, too, that helped him find this job, and he still works there today.

“I was referred to Lord, Abbett by a former roommate and teammate of mine, Rick DeRosa,” Funkey told The Daily Collegian. “He had said, ‘Hey, Funks, I'm not sure if you're thinking about playing, but I work at this company, working as an adviser consultant. I think it's something you would enjoy and you'd be very good at. I would love for you to come in and interview.’”

It wasn’t until Penn State reached out and asked Funkey to join the broadcast team that the thought of putting the headset on even crossed the 27-year-old’s mind.

However, getting Funkey onto broadcasts wasn’t a tough decision for the people at Penn State, should he have wanted to join the team.

A majority of his time in the blue and white was spent as a backup, but he grew to become a fan favorite in Hockey Valley, thanks in large part to his vibrant personality and ability to make others smile and laugh.

“He was funny in some of this stuff he did on the video board, a high-character guy in the locker room, someone that his teammates loved and the fans grew to love as just a backup goalie,” Brian Tripp, Penn State’s main play-by-play broadcaster, told the Collegian. “To find out that he was around and maybe interested in getting on the air, I thought it was a win-win for both sides.”

When he did get ice time, though, he performed relatively well. Funkey posted a career 7-5-1 record with two shutouts and a 2.77 goals-against average, which helps contribute to what Tripp referred to as a “tremendous hockey background.”

“When he came into this program we did a lot of homework on him, and we didn’t hear one average word about him,” Gadowsky said. “No one said he was a ‘good’ guy. No one. It was ‘great.’ He has a pretty profound effect on people.”

Funkey got a chance to leave a profound effect on the Nittany Lion fans listening to his first broadcast.

He made his debut on the mic during Penn State’s two-game series against Ohio State in Columbus on Nov. 5 and 6 — a place he had his own history with.

Back in 2017, Funkey posted a career-high 43 saves in a game where Andrew Sturtz forced overtime with 0.7 seconds left on a goal from the point.

Funkey then stopped all three shots in the eventual shootout to lead the Nittany Lions to a shootout victory over the Buckeyes at Value City Arena.

He did color commentary, while the usual color guy Eric Ohlson slid over to play-by-play for the series with Tripp gone covering the Penn State football game in Maryland.

Even with his history at Ohio State, Funkey was still nervous throwing on the headset for the first time.

“I was out of my element,” Funkey said. “I’m a guy who likes to talk, anybody who knows me will tell you that. I can talk for a while, but I will say, I was more nervous to put the headset on than I ever was to get between the pipes.”

As nerve-racking as it may have been, Funkey said after the first period or so he settled in and got comfortable live on the air.

The nerves for Funkey weren’t surprising to Tripp, though, who’s been calling Penn State games since the inception of the Division I team. The veteran radio voice told the former netminder the beginning would be the toughest.

He also informed him after he gets rolling, it’ll all become natural.

“I told him he’s gonna be nervous with the pregame show,” Tripp said. “Once the game starts you’re just gonna be sitting there talking to someone about hockey.”

Being that he played for four years under Gadowsky, Funkey can offer insights not many others have the ability to, so some of the hockey talk he brings to the table is next-level in-depth.

“The only thing I really wanted to do was try to add a little bit of insight just as one of Coach Gadowsky’s former players,” Funkey said. “Just maybe some insight as to what him and the staff are saying in the dressing room in between periods.”

However, he was able to add more than just that.

The goaltender position is one that is granted the opportunity to see the entire game as it develops, thus allowing for a more well-rounded understanding of the game.

There also aren’t many goaltenders on a roster — Penn State currently only boasts three — so Funkey’s perspective is more of a unique one than that of a former skater.

“He could kind of take us into the mind of a goalie a little bit,” Ohlson told the Collegian. “[He could] also compare it to what a shooter is doing in a situation and how the goaltender reacts to that.”

One specific goalie’s mind Funkey may have an easier time understanding is Oskar Autio, who started at Ohio State in the Saturday affair, stopping 25 shots in the 4-1 loss.

Autio and Funkey were teammates during the 2018-19 season when the now-senior Autio was a freshman, while Funkey was completing his final campaign for the blue and white.

The two goalie partners had a good relationship during the one season together and continued it after Funkey graduated, allowing him to follow how Autio has developed as a “goaltender and as a professional.”

“I really do think it helps as far as analysis on the air because I know Oskar very well,” Funkey said.

Autio echoed the sentiment of their friendship and added that Funkey has a wealth of things he can add to the broadcast team.

“I think we had a really good relationship,” Autio said. “He knows the culture within the locker room, the culture of this program; He just knows the ins and outs of this place.”

As for now, though, Funkey is filling in on the broadcasts in more of a part-time role, and it remains to be seen when his voice will fill the airwaves again.

However, the idea of a three-man booth is out there and is something Tripp, Ohlson and Funkey all mentioned would be exciting should it come to fruition.

Whenever he gets to put the headset back on, Funkey will continue to give Penn State fans entertainment thanks to his big personality and solid analysis — all while he enjoys it in the process.

“I got my first taste, and I loved it,” Funkey said. “Especially being around the Penn State hockey program, that was something that I really, really loved.”

In Penn State’s quest for a national title this season, four returning national champions will unquestionably lead the team.

Penn State upset a top-10 team in the country for the second time this season.

Zech Lambert is a sports editor for The Daily Collegian. He is a senior studying broadcast journalism with a minor in sports studies.