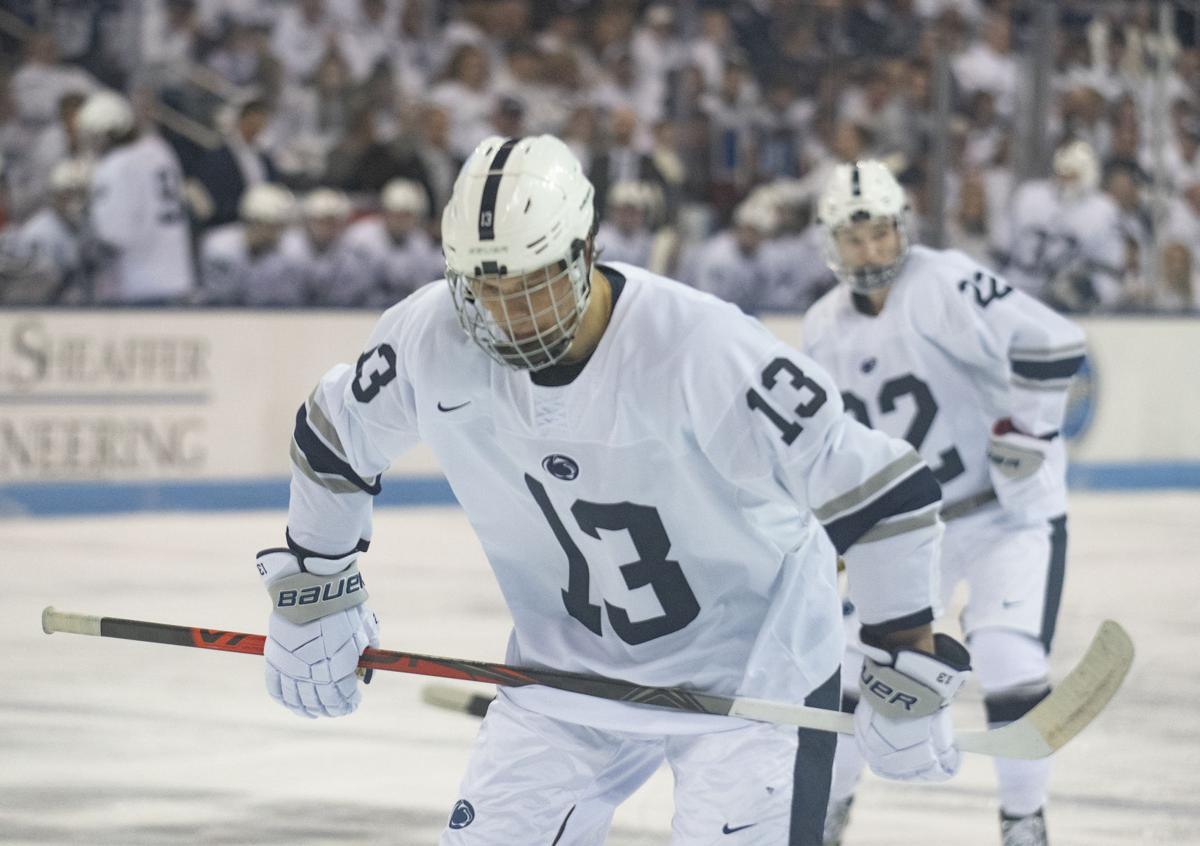 Nikita Pavlychev waits for the puck drop during the men’s hockey game against Notre Dame in Pegula Ice Arena on Saturday, Feb. 1, 2020. 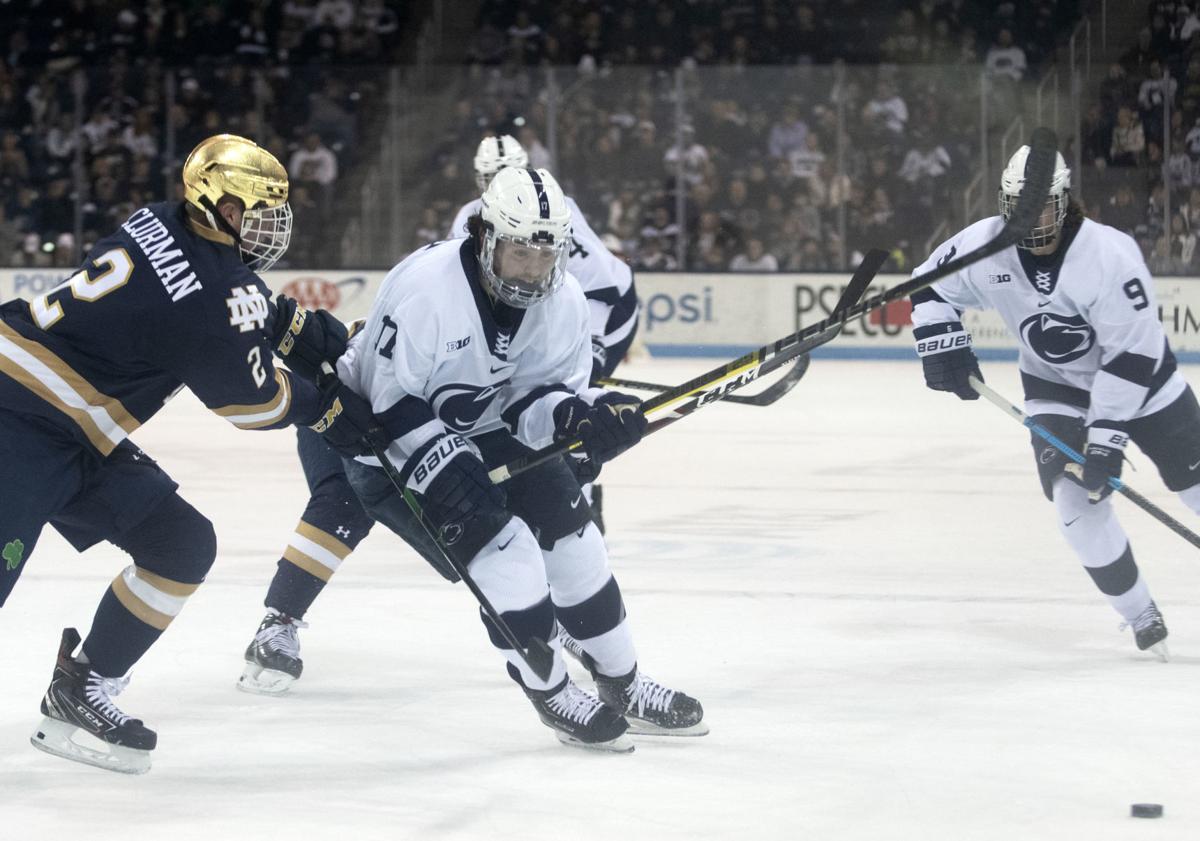 Forward Evan Barratt (17) tries keep possession of the puck during the men’s hockey game against Notre Dame in Pegula Ice Arena on Friday, Jan. 31, 2020. Penn State tied Notre Dame 3-3 with the Fighting Irish taking the extra Big Ten point in the seventh round of a shootout.

Editor’s Note: Each week, one of The Daily Collegian’s sports staff members will check in on former Penn State men’s hockey players who are making an impact at the professional level.

Less than a month remains in Penn State’s academic school year, but many former Nittany Lions are right in the thick of their professional seasons.

In recent years, an increased number of players who once sported the blue and white are competing across various hockey leagues both in the United States and internationally.

Penn State’s season may have finished a month ago, but here’s a gander at some former Nittany Lions’ recent professional performances.

After a blistering hot start to his professional career with points in five of his first six games with San Diego, Alex Limoges emerged pointless in his next five games and looked as if he was entering a slump.

That all changed when he had his first multi-goal game against San Jose April 20. Not only did Limoges chip in two goals in a 5-1 win, but he also contributed an assist.

Prior to the contest against the Barracuda, each of Limoges’ last six shots failed to find the back of the net. That all changed as he went a perfect 2-for-2 in the Gulls’ blowout victory.

To say Nikita Pavlychev’s professional season has been tumultuous would be an understatement.

On April 10, Pavlychev was reassigned by the Syracuse Crunch to the Orlando Solar Bears of the ECHL.

Prior to the demotion, Pavlychev played in four games with the Crunch, tallying just one assist. Since returning to the Sunshine State, the former Penn State forward has played in five games while recording no points for the Polar Bears.

He currently holds a -3 plus-minus and has spent 12 minutes in the sin bin across 15 games for Orlando. Out of 35 shots while competing with the Polar Bears, just two have reached the back of the net for Pavlychev.

In his brief time back in the ECHL, Pavlychev’s returns have been relatively barren.

Brandon Biro’s 15 games with the Americans have hardly been prosperous for him. The onetime Penn State captain holds a -5 plus-minus during his tenure with Rochester, yet he has been somewhat productive on the offensive end.

Biro has contributed five points on a pair of goals and a trio of assists from the left wing spot.

Still, in his last five games, Biro has tallied just one assist while recording a -4 plus-minus, including one game where he was on the ice for three Syracuse Crunch goals.

After a hot last week of March, Evan Barratt cooled off with one assist in a trio of games and a -3 plus-minus in the first few games of April.

Barratt’s sole point came against Chicago, but he was also on the ice for two Wolves goals in a 4-3 defeat. Between March 22 and March 28, Barratt had a pair of goals to go along with three assists.

In 21 games for the Ice Hogs, Barratt has four goals and eight assists. The Bristol, Pennsylvania, native has enjoyed a successful 2020-21 campaign despite his recent woes.

Cole Hults’ difficult start to his pro career continued with a rough past three games. In the first week of April, Hults had a combined -3 plus-minus despite providing his fourth assist of the season.

An offensive-minded defenseman, Hults has struggled to recreate the same level of magic he once did in University Park. In 19 games, he has just five points on a goal and four dimes.

In his last five games, Hults has a -5 plus-minus. A key problem for Hults has been a lack of shots on net — considering he has only registered 17 of them.

So far, the pro game has proven to be problematic for the former Nittany Lion.

A 10-12 season is typically never viewed as a success, but for Guy Gadowsky, Penn State’s 2020-21 campaign was just that.

Questions swirled around Penn State coming into its conference-only 2020-21 season.

Former Penn State offensive lineman Steven Gonzalez has been through a whirlwind on his football journey recently.