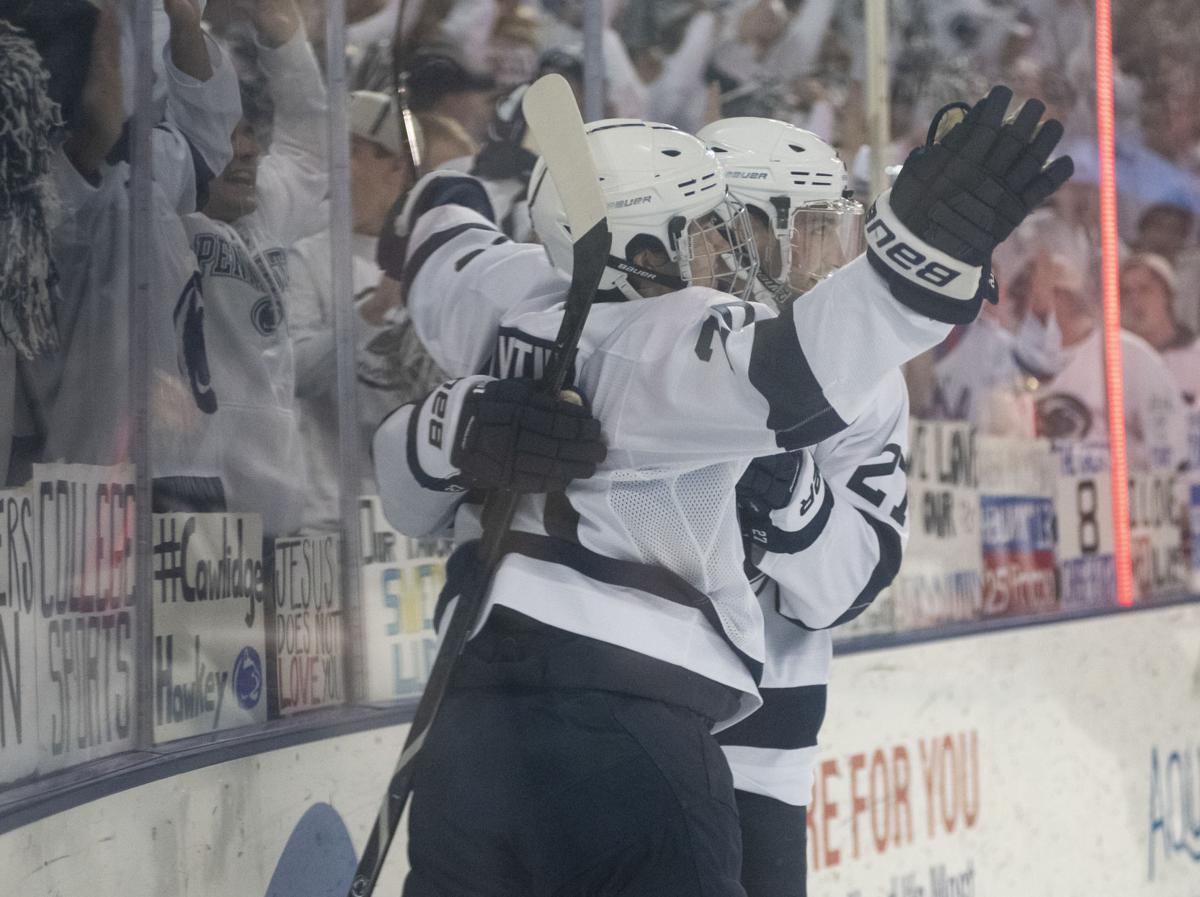 Aarne Talvitie (20) celebrates his goal with Sam Sternschein (27) during the men's hockey game against Notre Dame at the Pegula Ice Arena on Dec. 7, 2018. The No. 9 Nittany Lions were defeated by the No. 5 Fighting Irish, 5-4. 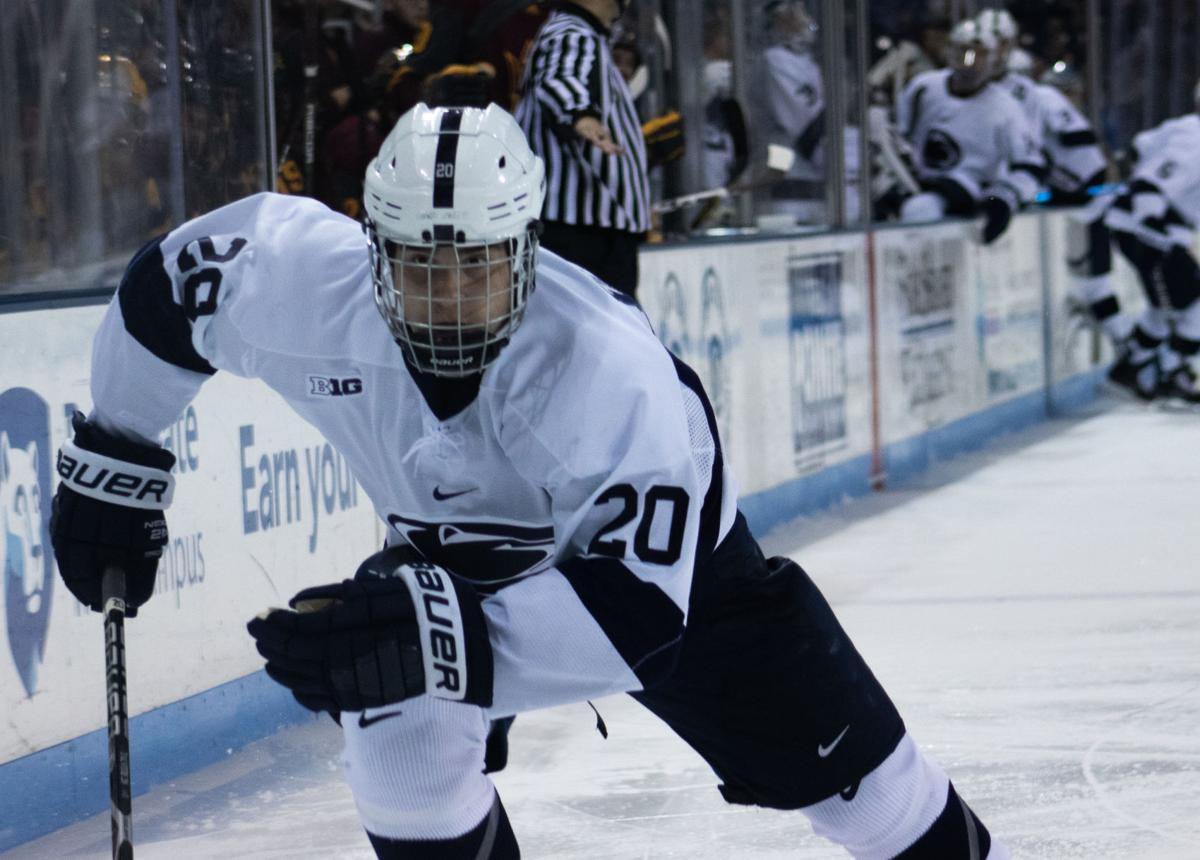 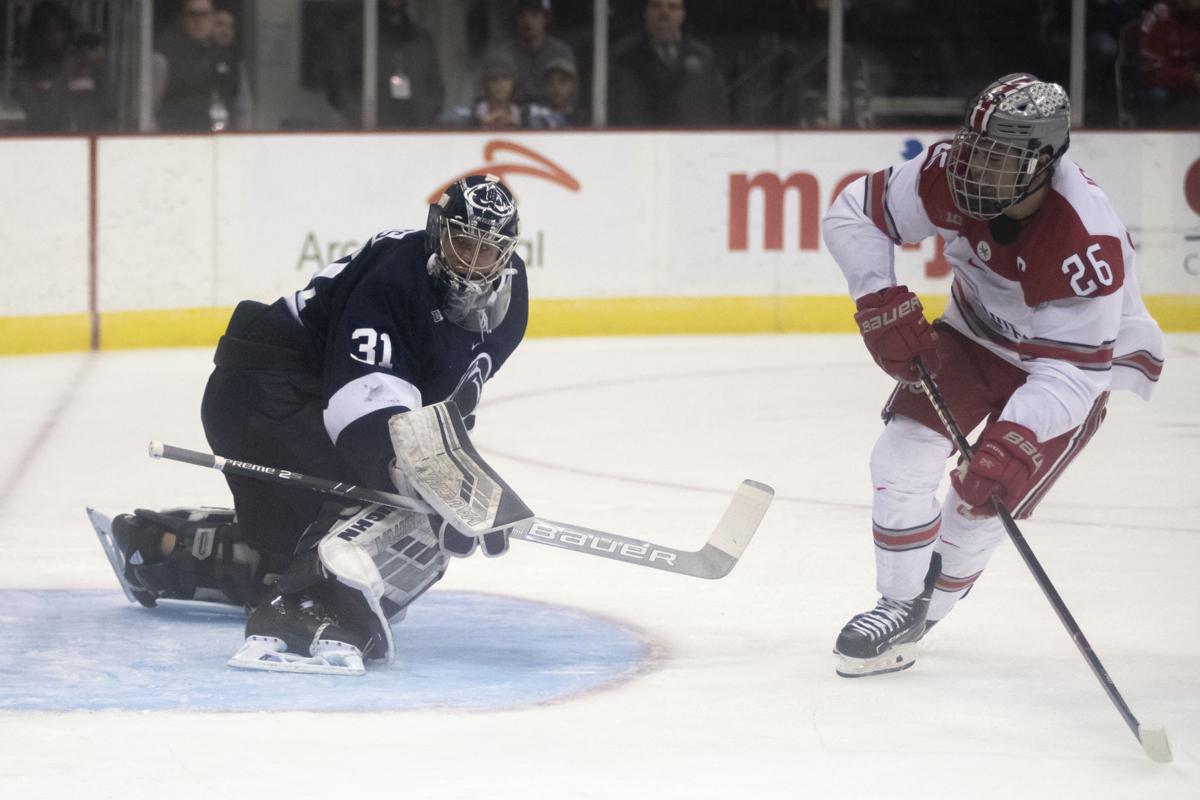 Peyton Jones (31) makes a save on Ohio State player Mason Jobst (26) during the Big Ten Men’s Ice Hockey Tournament Semifinals against Ohio State at Value City Arena in Columbus, Ohio, on Mar. 17, 2019. The No. 17 Nittany Lions defeated the No. 6 Buckeyes, 5-1. 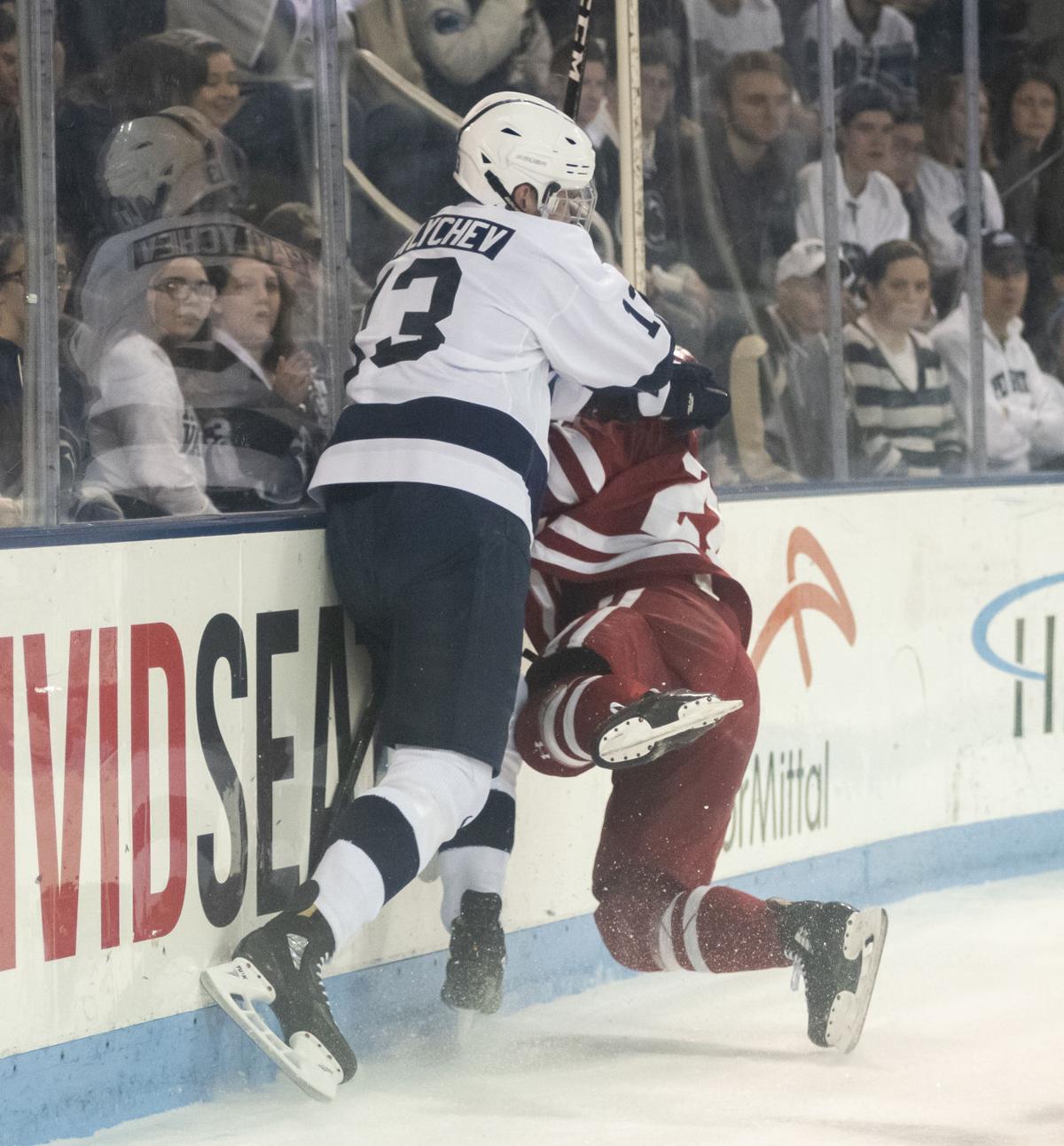 Nikita Pavlychev (13) lays a hit on a Wisconsin player during the Big Ten Men's Ice Hockey Tournament against Wisconsin at the Pegula Ice Arena on Mar. 10, 2019.

Following the team’s 5-0 win in an exhibition game Sunday, Penn State will be back in action Friday night to kick off the season.

Several freshmen will be making their debut against Sacred Heart this weekend after all appearing in the game Sunday.

Guy Gadowsky and select players met with the media Tuesday to talk about the upcoming weekend.

It’s been nearly ten months since Aarne Talvitie last played in an official game, but he’s back and better than ever, according to him.

“I would say [I’m] pretty much [at] 100 percent right now,” Talvitie said. “This was my goal the whole time - to be ready to go for the season opener and I’m there right now.”

An ACL injury in the World Junior Championship sidelined the sophomore defenseman for the entirety of the second half of the season.

Talvitie had one word to describe his play on Sunday.

Gadowsky has confidence that this defense will be more aggressive than in years past, and the Finn will contribute more and more as he finds his footing.

“He’s coming off a very significant break and injury, and I don’t think where he was, let’s say on Sunday, is where he is going to be in two weeks,” Gadowsky said.

Defenseman Kris Myllari attended practice Tuesday but is still day-to-day, according to Gadowsky. Forward Nikita Pavlychev is also day-to-day but did not practice.

Gadowsky also mentioned that if Pavlychev is unable to suit up on Friday, Connor MacEachern would fill the fourth center role, playing in between Tyler Gratton and Connor McMenamin. The line would consist of all freshmen.

“I felt like me, Connor McMenamin and MacEachern got together and got some chemistry going and we played pretty well,” Gratton said.

Myllari appeared in 39 games last season and accounted for four goals and 17 points. His +19 was tied for fourth-highest on the team. Pavlychev had 14 goals and 15 assists in 39 games.

Gadowsky confirmed that Peyton Jones will be starting for the time being, with no additional plans for the future.

Backing him up will be sophomore Oskar Autio and former-Penn State Ice Lion Will Holtforster.