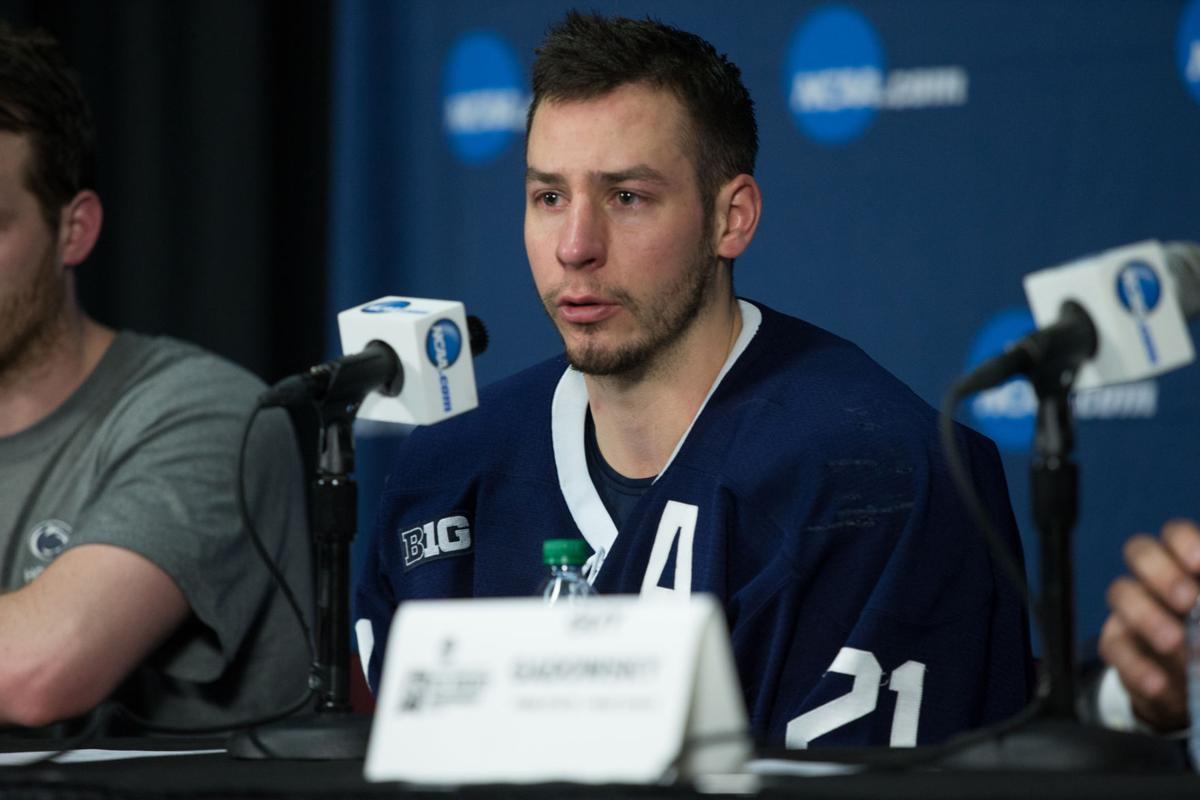 Forward Ricky DeRosa (21) speaks with tears in his eyes after the 6-3 loss to No. 1 Denver at the final of the Midwest Regional of the NCAA Hockey Tournament at U.S. Bank Arena on Sunday, March 26, 2017. 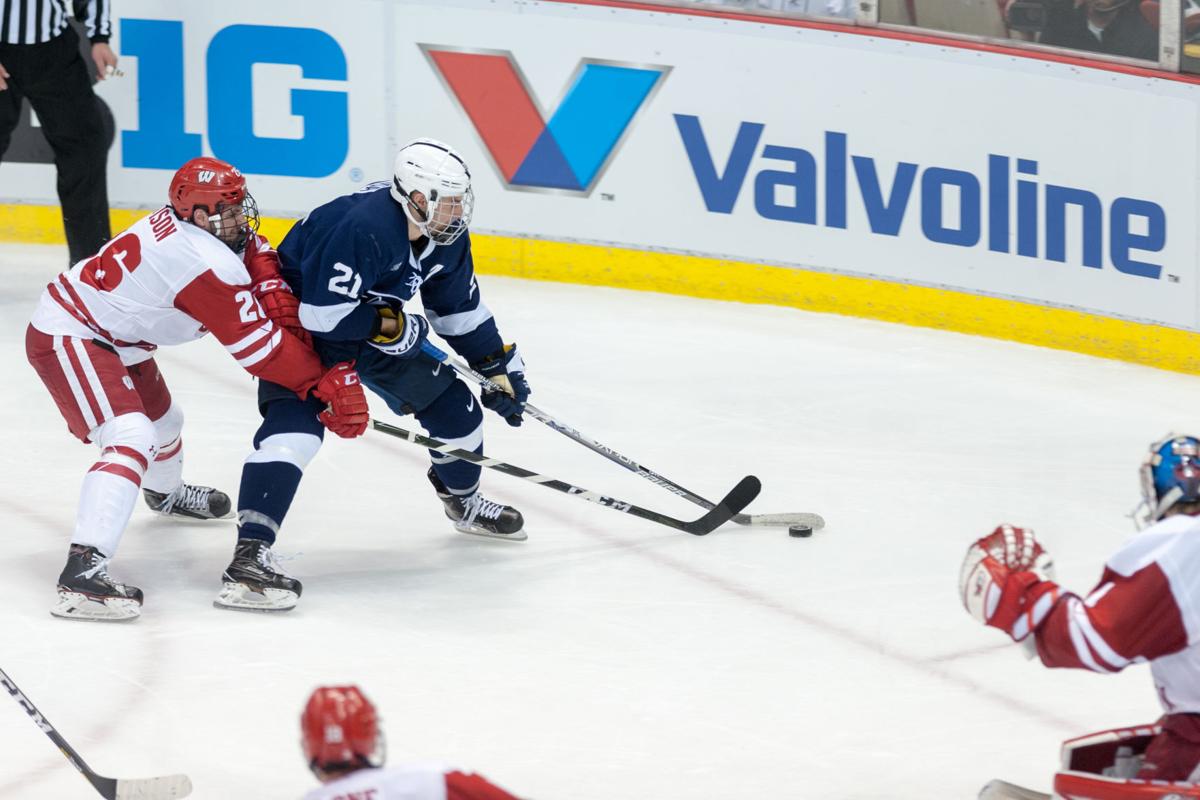 Forward Ricky DeRosa (21) attempts to keep the puck from Wisconsin defenseman Tim Davison (26) during the Big Ten Championship game against No. 17 Wisconsin at Joe Louis Arena on Saturday, March 18, 2017. No. 11 Penn State won 2-1 in double overtime to clinch the first Big Ten Title in program history. 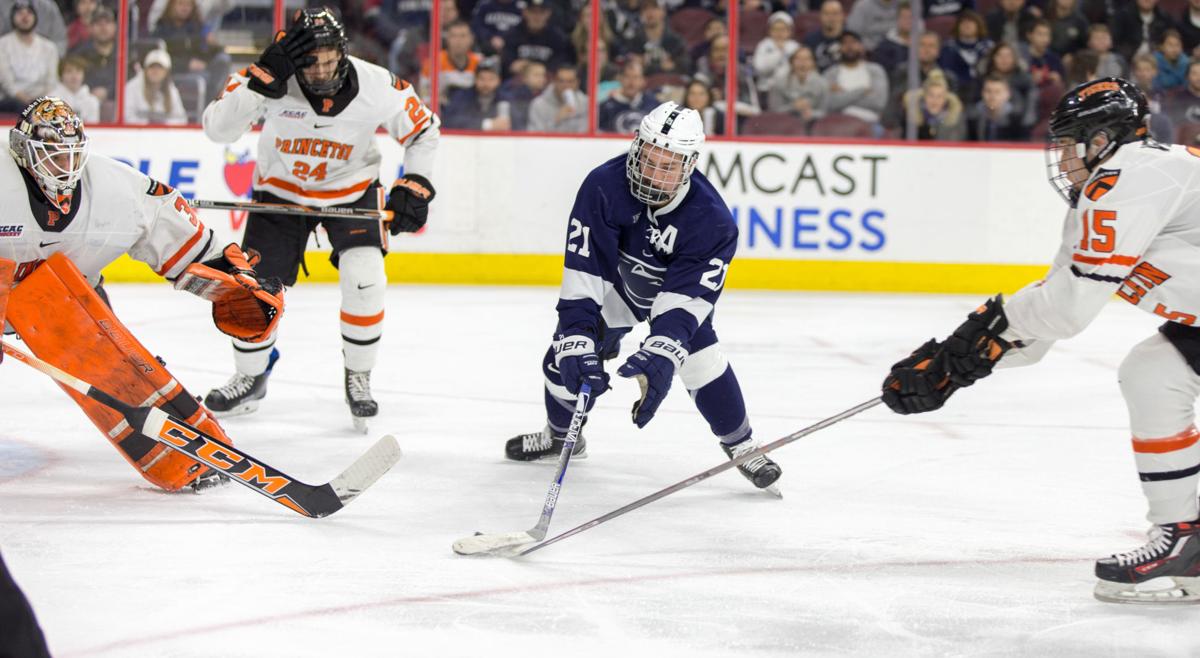 Forward Ricky DeRosa (21) lays out in attempt to shoot during the game against Princeton at Wells Fargo Center on Saturday, Jan. 28, 2017. Penn State lost 5-4.

Ricky DeRosa knew playing hockey long term wasn’t in the cards for him.

After playing a few games with the New York Rangers ECHL team at the time, the Greenville Swamp Rabbits, DeRosa was looking to an entirely new direction.

“I was always interested in finance throughout my time at Penn State. I actually didn’t even study finance, I studied management,” DeRosa said. “I had an opportunity to interview at a management firm located in Jersey City, New Jersey, called Lord Abbett.

“I transitioned from hockey straight to Wall Street pretty much.”

DeRosa, now a regional manager for Lord Abbett & Co., credits his foundation and “mental fortitude” to his time at Penn State.

“You really learn from the day you step on campus that nothing’s given to you, everything is earned. You learn how to be a good teammate, you learn how to get challenged and come out better for it, you learn how to adapt to adversity,” DeRosa said. “It’s just those tools and building the mental fortitude that Coach Gadowsky, Coach Lindsey and certainly Coach Fisher put in place and set challenges for you throughout the way.”

Some of those who have had a large impact on DeRosa include former teammates Chase Berger, Tommy Olczyk and former mentee Denis Smirnov. DeRosa’s impact on his former teammates, most notably his work ethic and drive, has been long lasting.

“He’s just a phenomenal human and he definitely wasn’t the most skilled hockey player – I think I’m allowed to say that because I wasn’t the most skilled hockey player either.” Olczyk said. “But Ricky worked really hard and that’s why he got chosen to be one of the captains his last season at Penn State. I remember I was one of the guys that voted for him when I left, and I just knew he has a lot of character and he’s someone I’m honored to call one of my best friends.”

DeRosa’s role on the team was one that wasn’t focused on being a point producer. Instead, he was focused on protecting his teammates and doing the dirty work.

“He was a shutdown guy that was hard to play against for better players on the other team. I think he really accepted his role and he did it with a smile, even though it's not the glory position,” Berger said. “I think for me it made me appreciate guys like that. So when I got older I wanted to accept my role and do it the best I could.”

Berger remembers a moment of DeRosa when Penn State was on the road and DeRosa did everything he could to get under an opposing player’s skin.

“I remember one time we were in Michigan and Kyle Connor was a real good player that year. And he was getting off the ice and Ricky was barking at him. Just full on barking. And I’m kind of looking over like, ‘What is going on?’ He’d just kind of do anything to get under someone’s skin, and I thought that was pretty funny,” Berger said. “And I know that guys just hated to play against him, but we loved to have him.”

For Smirnov starting his hockey career at Penn State, DeRosa was a valued protector on the ice.

“There was one time we played a Big Ten school and I got hit pretty bad, not the cleanest hit. But he said, ‘Play your game and if that guy comes to you tell me, and I’ll take care of it.’ So he was kind of that guy who made me feel comfortable on the ice and during the games and in practices,” Smirnov said.

Off the ice, DeRosa’s mentorship of Smirnov made his transition to college an easier one.

“He took me under his wing and would skate with me, would take me to classes, or to get a sweet together – just talk about how things are going,” Smirnov said. “He’s really supportive in that role, and we built a bond in just a year and we still talk about life, about hockey.”

To DeRosa, it was not only his teammates who had a large impact on him, but also Gadowsky.

“He’s such a person that cares first about the player, I mean he cares about you off the ice. He cares how you’re doing in class, he cares how your family’s doing,” DeRosa said. “He was absolutely impactful, kind of shaping me not only as the hockey player I became in my time there, but certainly off the ice and the person I am today.”

Olczyk believes DeRosa’s ability to juggle many things at once and equally excel at them all made him ideal to go into the finance world and be successful with ease.

“You look at Ricky’s ability to balance a Division I sport while getting his degree and doing really well in all his classes," Olczyk said. "Things like that translate to the real world, and people in the business world see your work ethic, see your willingness to contribute and try to give your best every single day, and I think that’s why Ricky has been so successful in the business world so far and that success will only continue to grow.”

Now DeRosa, who lives in Alabama, doesn’t get the opportunity to skate much and has only been on the ice around five times since leaving Penn State. His connection to hockey though remains strong, especially with the Nittany Lion’s program.

“Coach Gadowsky brought me in when they played at Madison Square Garden... to give the pregame speech, that was neat," DeRosa said. "Hockey’s still in my life in that regard, it’s not the big aspect that it was — I’m just a fan now, which is fine with me. I enjoy watching those guys play."

DeRosa’s connection with Penn State continues outside of Pegula, when he started a reading incentive program with elementary schools in the State College area, which he spearheaded his junior and senior years. Eventually, 16 other Division I teams on campus also began participating.

Looking back at his hockey career and time with Gadowsky’s program, DeRosa attributes who he is today to the sport.

“In truth it’s really interesting and tough to take on a challenge you don’t know a whole lot about. You’re entering into a new environment and you have to accept the change immediately and be agile and have that mental fortitude that you went through so much,” DeRosa said. “Not only at Penn State, but juniors prior for a couple of years and really working your way up ranks.

“To be able to switch to a different career path and use those different skills that you learned along the way to transition and hopefully succeed over the long term.”

Coronavirus, ticket information for all Big Ten athletic programs | What precautions are being taken?

As the scheduled start of the 2020 college football season inches closer, Big Ten programs are beginning to outline their plans and contingencies for the offseason and beyond.

Some former Penn Staters saw their best moments for different programs after venturing away from State College.

Luke Juha’s life has always been centered around hockey, and once he decided it was time to hang up his skates, Juha knew hockey would still b…