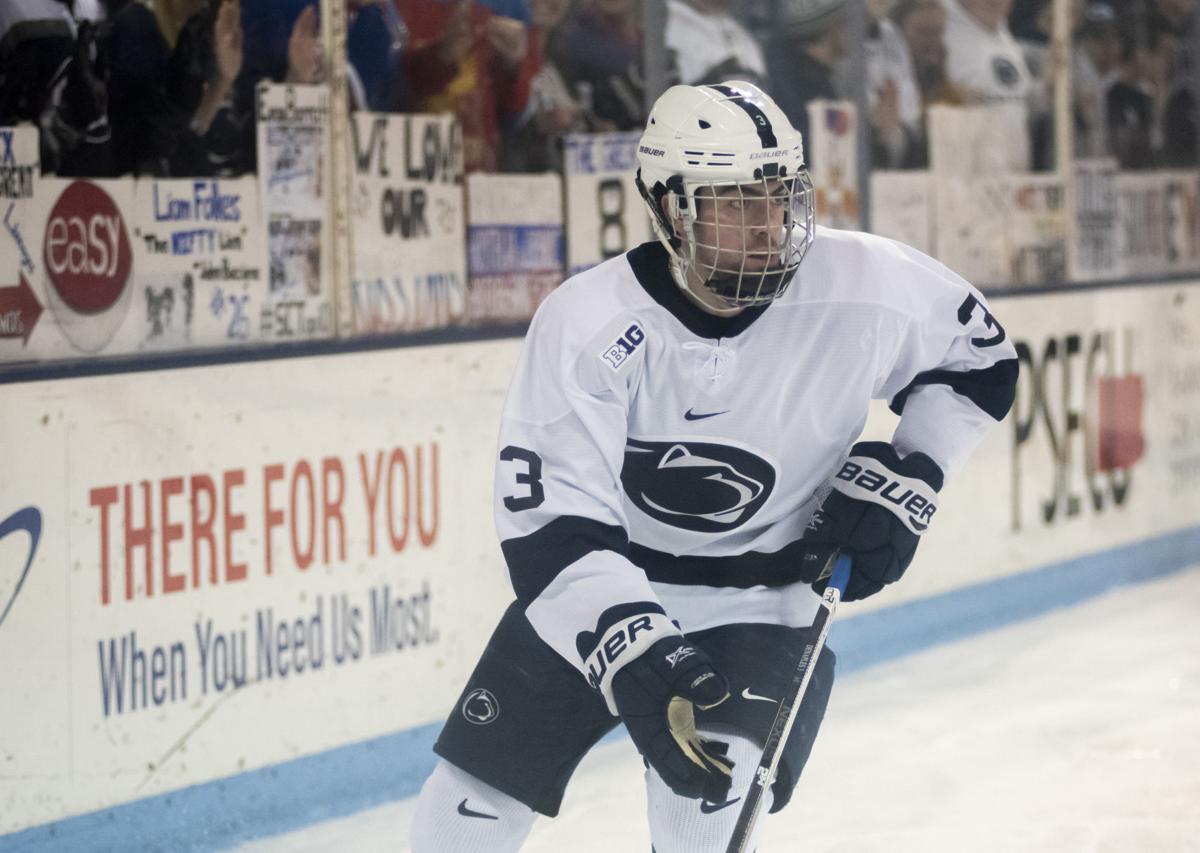 Paul DeNaples (3) carries the puck during the men's hockey game against Minnesota at Pegula Ice Arena on Feb. 9, 2019. 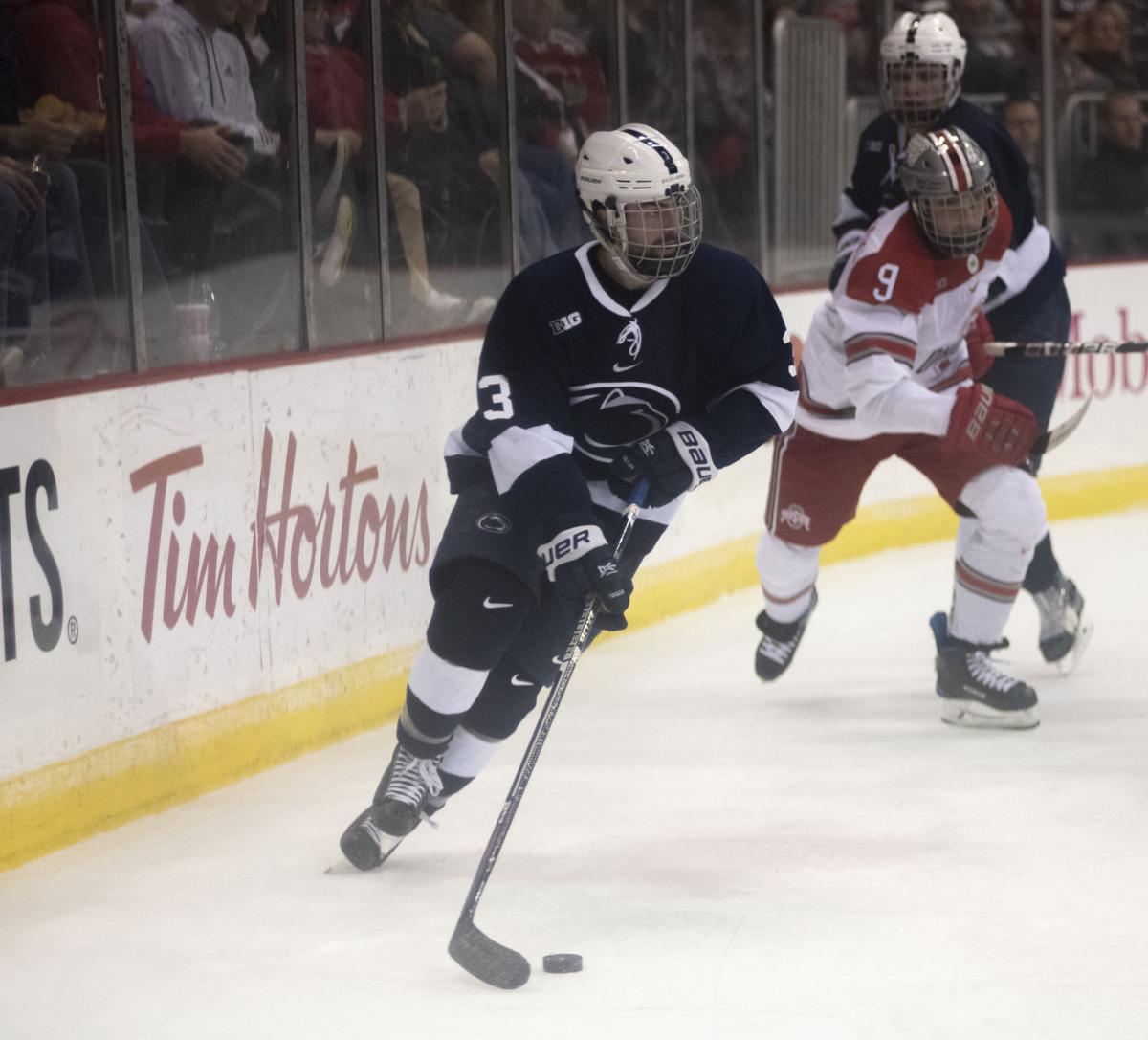 Paul DeNaples (3) carries the puck out of the Penn State zone during the Big Ten Men’s Ice Hockey Tournament Semifinals against Ohio State at Value City Arena in Columbus, Ohio, on Mar. 17, 2019. The No. 17 Nittany Lions defeated the No. 6 Buckeyes, 5-1. 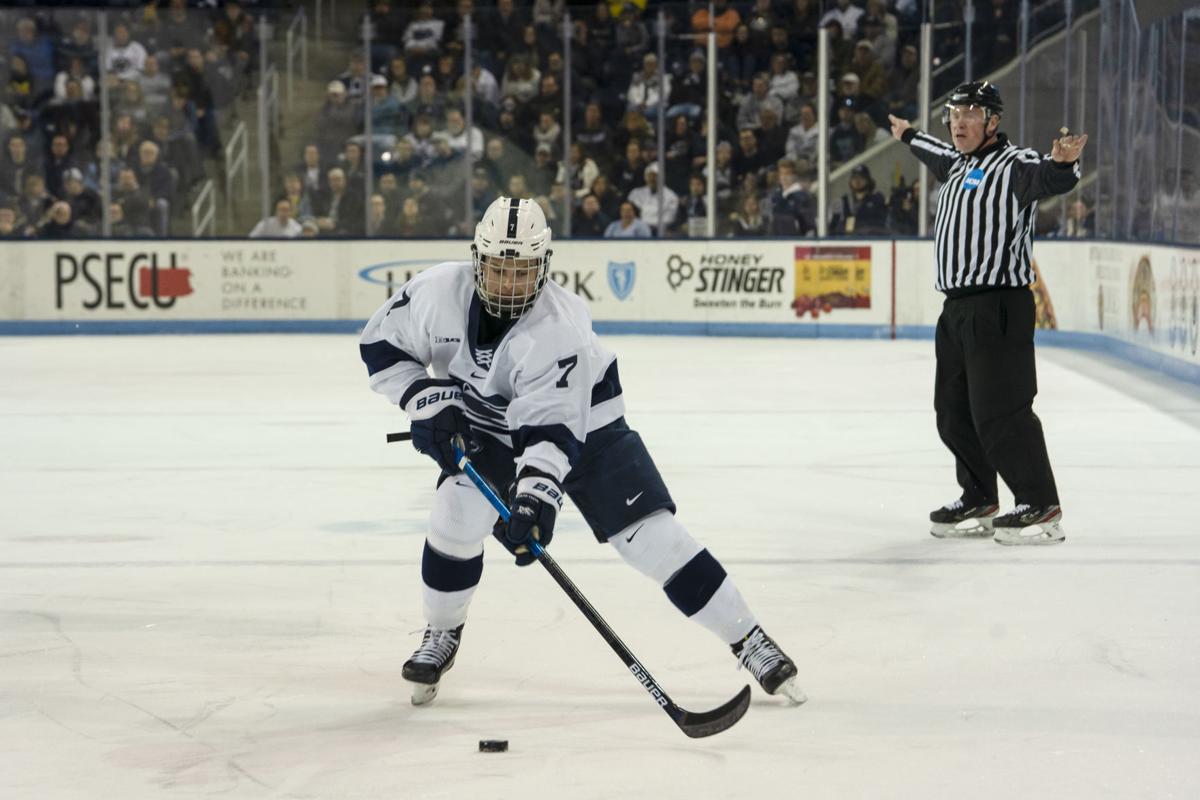 Evan Bell (7) brings the puck into play for the Nittany Lions against Michigan State Friday, Jan. 17, 2020, at the Pegula Ice Arena.

With Cole Hults foregoing his senior year to start his professional career with the Los Angeles Kings next season, the Nittany Lions will need to fill a massive hole on its blueline.

Ranking first on Penn State’s all-time points list for a defenseman with 78, Hults was one of the program's most dependable defensemen the last three seasons. In 2019-20, he racked up 29 points on 21 assists and eight goals.

With five new defensemen, in addition to the six returning defensemen, the program will certainly have many options to choose from, and will most likely play around with blueline combinations next season.

Paul DeNaples will be expected to take on a bigger role next season and fill the gap Hults is leaving.

Having been named an alternate captain for the 2020-21 season, DeNaples ranked second with the Nittany Lions with a plus 18 goal differential while he was on the ice, which ranked second in the Big Ten. DeNaples, much like former blueline mate Hults, is a very consistent player, making simple but effective plays.

While his 10 points last season from three goals and seven assists were down from his freshman season’s 14 points from two goals and 12 assists, DeNaples isn’t a player who is defined by his stats.

DeNaples steadies the team on the ice, and his usefulness and ability can’t necessarily be shown just by numbers.

A high-production, low-risk defensemen, DeNaples' dependability will be an asset to the team next season.

Penn State will also have a number of new faces looking to come in and make an immediate impact for Guy Gadowsky’s squad.

A number of these new players such as Jimmy Dowd, Christian Berger, Jarod Crespo and Hunter Carrick all had strong 2019-20 seasons.

How these defensemen will fit into Penn State’s program has yet to be seen, but it’s likely each will get some playing time throughout the season.

Some, like Johnson, have had minimal playing time, with the defenseman having only played two games this past season.

It’s likely that Stevens, Snell, Phillips or Bell will join DeNaples on the first line this coming season.

Each of these players all played in over 20 games last season. Stevens had three points in 20 games this past season, Snell had four points in 24 games, Phillips had nine points in 25 games and Bell had seven in 23 games.

Who will be paired with DeNaples will most likely be picked based on chemistry and ability that pairs well with DeNaples consistency. During the first few games of the season, it’s possible the pairs switch around before there is a steady fit with DeNaples.

It’s undeniable that even with the talent with the current and incoming defensemen, filling the skates that Hults is leaving will be no easy task for Gadowsky.

Race reform in college athletics will not happen overnight, but the Big Ten is taking steps …