You are the owner of this article.
Edit Article Add New Article
You have permission to edit this article.
Edit
Home
Latest
News
Sports
Football
Opinion
Lifestyle
Multimedia
Join
Subscribe
Share This
Men‘s Hockey • Click for more stories •
1 of 3 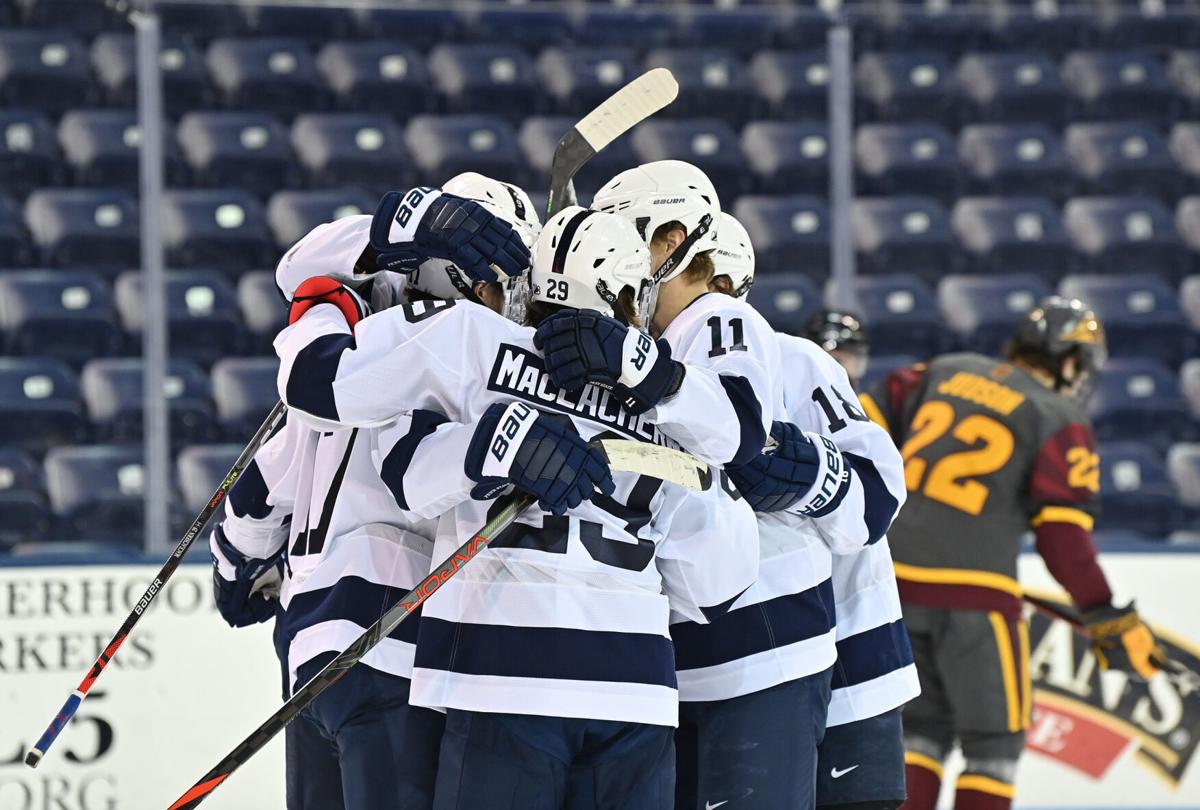 Several Penn State men's hockey players embrace and celebrate after the Nittany Lions score a goal against No. 20 Arizona State at Pegula Ice Arena. Connor MacEachern (29) won the game in overtime for the Nittany Lions 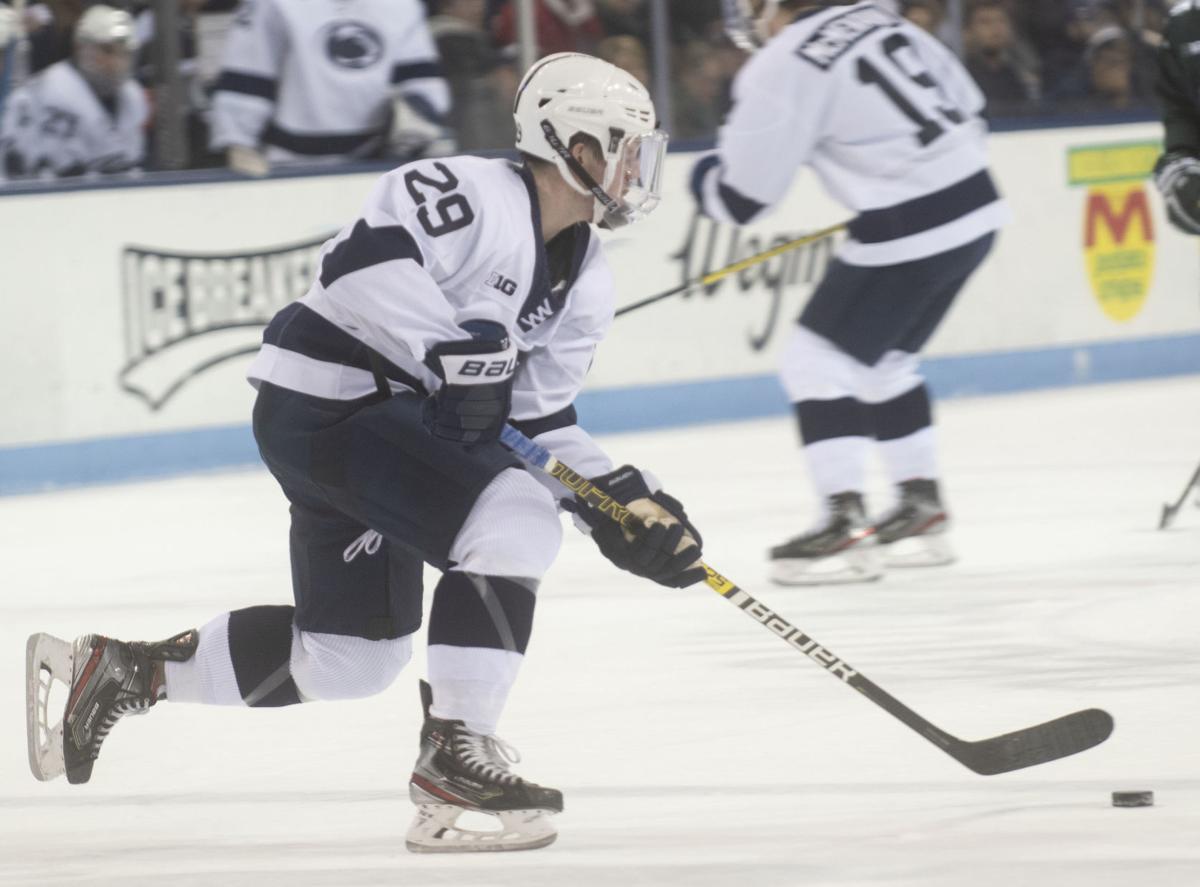 Forward Connor MacEachern (29) carries the puck up ice during the men’s hockey game against Michigan State at Pegula Ice Arena on Friday, Nov. 8, 2019. The No. 6 Nittany Lions fell to the Spartans 2-0. 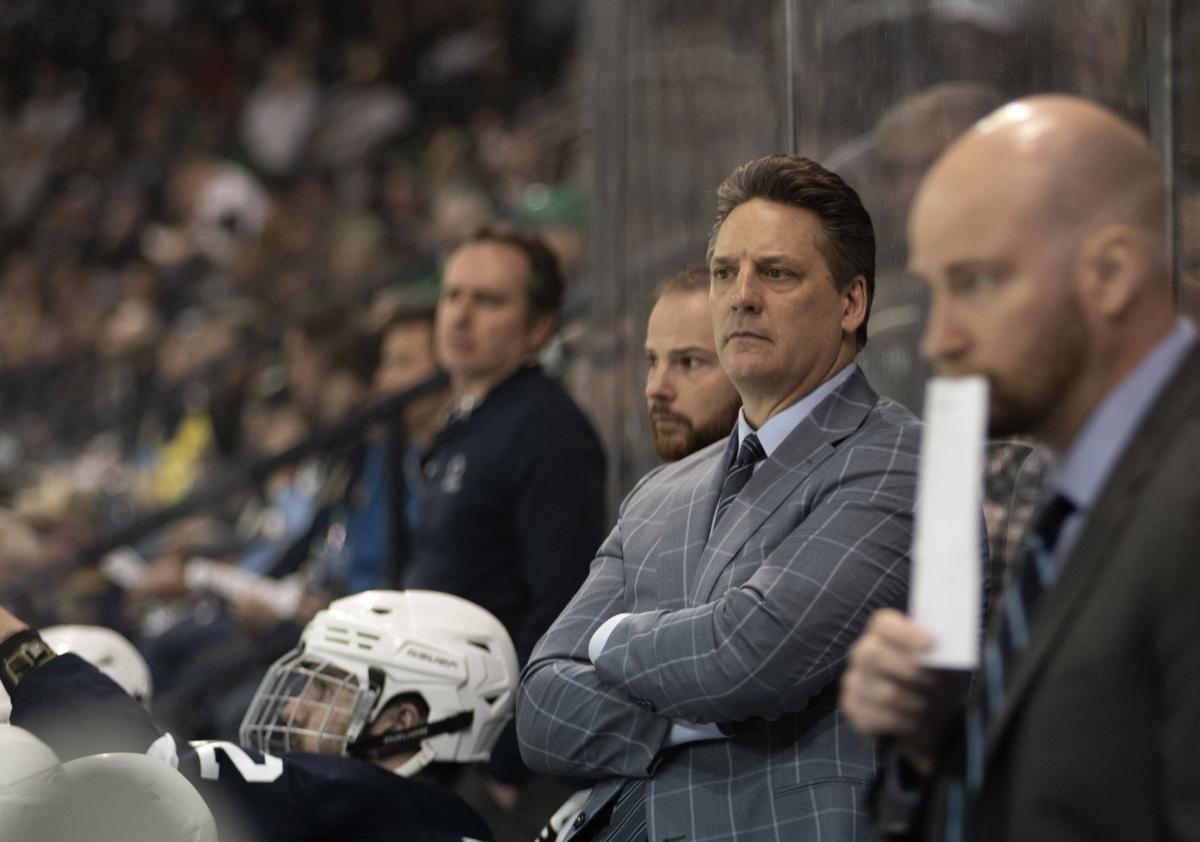 Penn State’s most dominant line on Friday night needed a little help from an unsung hero.

The Nittany Lions’ second line of Alex Limoges, Tim Doherty and Xander Lamppa produced two goals in the first 20 minutes, but Penn State’s offense turned ice cold in the second and third periods against No. 20 Arizona State, eventually sending the game to overtime.

During the extra frame, it was fourth-liner Connor MacEachern who put the team on his back with the game-winning overtime goal in Penn State’s 3-2 victory with just 63 seconds to go.

“It was pretty unreal,” MacEachern said. “It’s been a while since I put one in the back of the net so it felt pretty good. Just getting that win was huge for our team.”

MacEachern said during a longer line change by Arizona State allowed him the opportunity to scoop up the loose puck and skate into the Sun Devils’ end.

On a two-on-one breakaway with Limoges, MacEachern kept the puck to himself instead of passing it off to the senior captain.

Though MacEachern said he “really wanted” to pass it, he ultimately trusted in his abilities and went with his instincts--netting his first goal since January of last season against Robert Morris.

“Here at Penn State, we always preach a shoot first mentality,” MacEachern said. “In that moment, I knew I was shooting that puck as soon as I picked it up.”

Arizona State goalie Evan Debrouwer turned in an excellent performance for the Sun Devils, turning away 47 of Penn State’s 50 shots.

Debrouwer said Arizona State’s skaters had no energy left and were “desperate” to get off the ice for another line change.

But before they could, Debrouwer was caught off guard by the Nittany Lions’ offensive rush and MacEachern made the Sun Devils pay.

“He made a nice shot,” Debrouwer said. “I was a little bit off angle, but that’s the way it goes in overtime.”

With just three skaters on the ice for each team instead of five during the extra period, coaches will often turn to players who have received less ice time throughout the course of the game.

Such was the strategy for Gadowsky, who elected to have MacEachern on the ice for the final goal. Gadowsky was impressed by the sophomore’s confidence in his ability.

“When [MacEachern] found the ice, he was a little fresher than the rest of the guys,” Gadowsky said. “I love his mentality. He obviously made the right decision with a hell of a shot.”

Doherty, who netted his third goal of the season in the win, said the difference in back to back wins for Penn State has been playing with confidence.

For a young player like MacEachern, the belief he demonstrated in his abilities is a sign of the maturation the Nittany Lions have undergone through the first seven games of the season.

A graduate student himself, Doherty said the key for Penn State is for the Nittany Lions’ younger players to have faith in their skills.

“Confidence is definitely a big thing in a game like hockey and as long as we keep playing well and playing the right way, I think [the wins] are just going to come,” Doherty said.

Though MacEachern typically doesn’t get the same scoring opportunities as other centers on the team like Chase McLane or Aarne Talvitie, Doherty said he was “not surprised” that it was MacEachern who won the game for Penn State.

“He’s got a heck of a shot and I think he showed that on that last play,” Doherty said. “Just a hard nosed player, and I think he really deserved that goal.”

Gadowsky called MacEachern’s shot and goal “great” and that it felt “really good” to get a late winner over Arizona State, a team which posed defensive challenges for Penn State throughout.

The Sun Devils had four powerplay opportunities but came up short on all of them.

Instead of Arizona State taking the first game of the series, it was Penn State earning the Friday night victory.

After something of a marathon of a game, MacEachern was happy he could put an end to the Nittany Lions’ longest match of the young season.

“To end on a high note and with a [win], that was huge--really exciting,” MacEachern said.

Penn State men's hockey downs No. 20 Arizona State in overtime thanks to some late game heroics

Andrew Destin is a sports reporter at The Daily Collegian. He is a junior studying broadcast journalism and political science