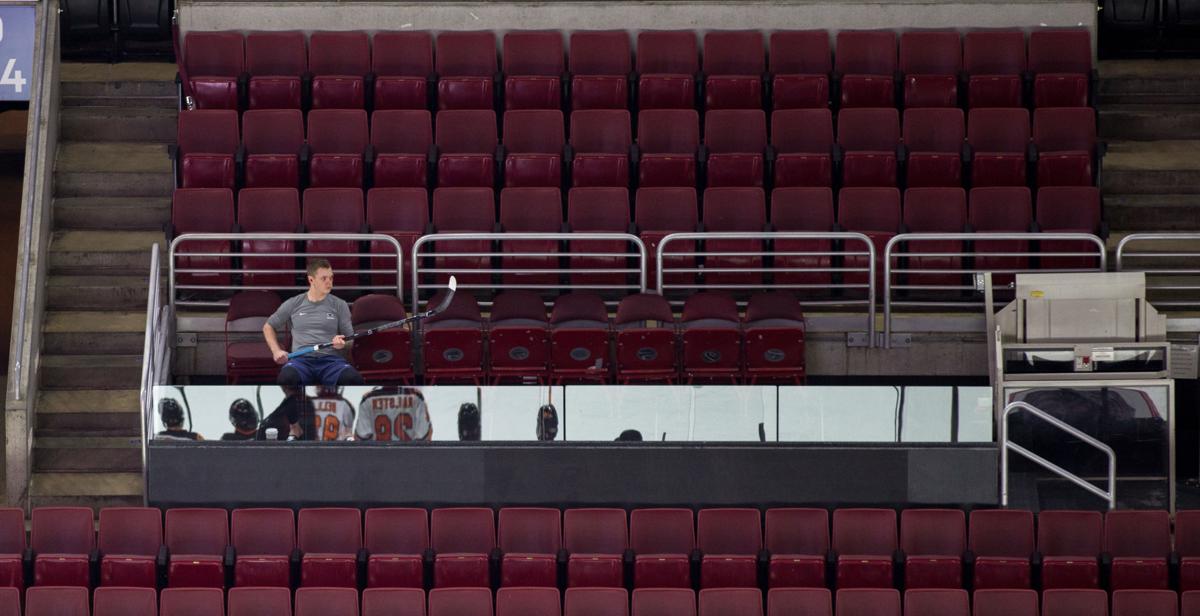 Defenseman Vince Pedrie (24) tapes his stick in preparation for a game against Princeton during the Philadelphia College Hockey Faceoff at Wells Fargo Center on Saturday, Jan. 28, 2017. 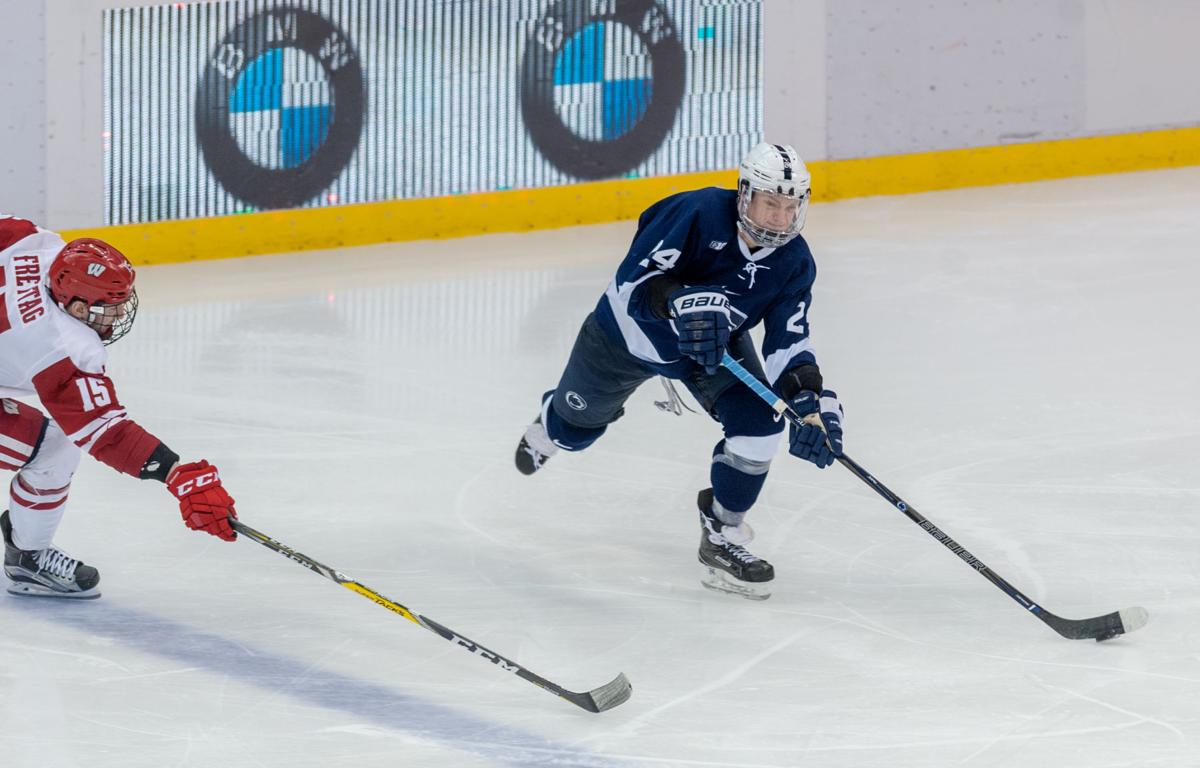 Defenseman Vince Pedrie (24) surveys the ice to look for a pass with pressure from Wisconsin forward Matthew Freytag (15) during the Big Ten Championship game against No. 17 Wisconsin at Joe Louis Arena on Saturday, March 18, 2017. No. 11 Penn State won 2-1 in double overtime to clinch the first Big Ten Title in program history. 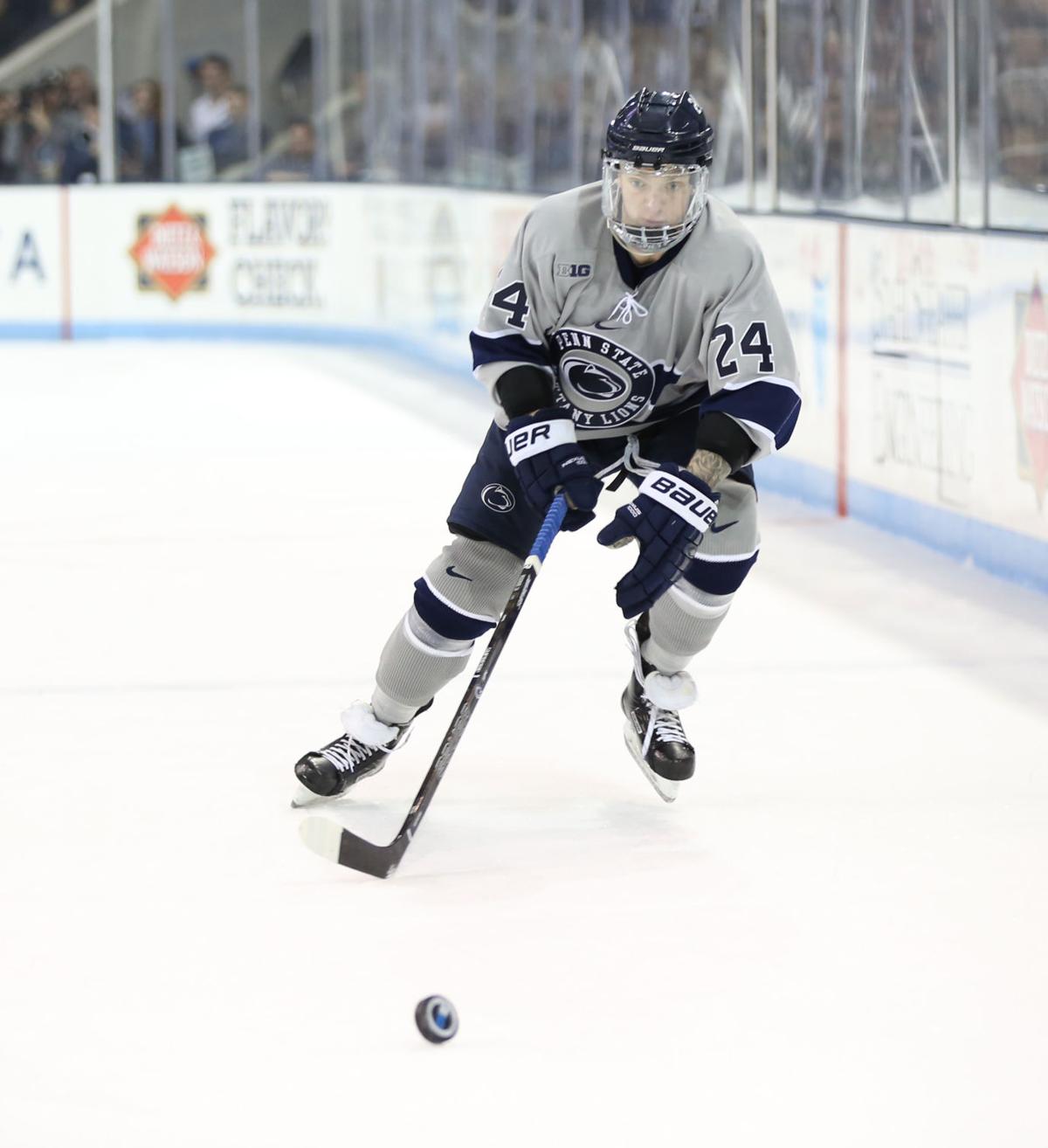 And now as Pedrie is now adjusting to life off the ice, his work ethic is still persistent in his new endeavors.

Pedrie retired after the 2019-20 season with Arizona Coyotes AHL affiliate the Tucson Roadrunners, and has since co-founded a sports agency, NXT Sports Group, while also coaching at the youth level.

Known by his former teammates for his dedication and passion for the game, Pedrie is using NXT Sports Group to give additional support to players as he did with his fellow Nittany Lions.

“If you look statistically, the longest professional career is an average of four to five years. We make sure all of our guys have a plan,” Pedrie said. “Everyone dreams of playing 15, 20 years in the NHL and we hope our clients do, but if that doesn’t happen for some reason then we are able to make sure that they are set up for life after hockey.”

Pedrie said the sports group focuses on creating a more personal experience. Players will have support for not just on the ice issues, but off the ice as well.

“Whether it’s mentally or with their families or with their career, we wanted to be more personable and create a better experience,” Pedrie said.

As with everything he does, Pedrie intends to work hard and is undeniably dedicated to the success of NXT Sports Group.

“Between my partner and I, we’ve been through a lot of highs and lows in our careers, and we think that experiencing that will help us represent our clients the best.”

Throughout his professional career with numerous teams in the AHL, his friendships with former Penn Staters like Ricky DeRosa, Tommy Olczyk, Zach Saar, Chase Berger, Chris Funkey and Andrew Sturtz have withstood the test of time.

“Even though we haven’t actually been together in a year or two, I still stay in touch with those guys all the time, and although my time at school was short, whenever I came back to visit they would welcome me with open arms,” Pedrie said. “Those guys will be in my life forever. They’re guys that will be at my wedding, see my kids grow up.”

Despite spending only two years with the Nittany Lions, Pedrie’s impact on his former teammates was immense.

“He lifts people up that are close to him," DeRosa said. "He forces you to be a better version of yourself."

DeRosa and Luke Juha both remember Pedrie’s work ethic and dedication on and off the ice, and have the same image in their minds of how they remember their former teammate.

“I remember studying in the locker room and it was pretty late, 11 p.m., and I was heading home for the night… as I was leaving I heard this noise coming out of the shooting range, and I was like ‘who’s in here right now?'” Juha said.

“It would just be Vince with his headphones shooting pucks. That’s kind of a testament to who he is… he put in the work nonstop, religiously,” DeRosa said.

Olczyk said Pedrie was the first on the ice everyday, and like Juha and DeRosa, he remembers Pedrie spending hours at the shooting range.

Juha, Pedrie’s mentor at Penn State, fondly remembers his time he spent with his mentee, as well as Pedrie’s growth in the short time the two were teammates.

“To be honest, he was a bit unruly at the start,” Juha said. “I know that he wanted to play his style and wanted to play his game, and in a team environment like Penn State where you’re together for four years, you have to play the coaches system…”

Pedrie’s improvement was evident, and to Juha, his dedication and work ethic made him a leader on the team.

“Every practice he always made everybody better in the sense that he was always trying to improve, so it pushed everybody else to take another step,” Juha said. “He was exceptionally creative for a defensemen, and I was happy to have that because I wasn’t as creative as him, especially offensively.

“Being able to do some of the drills that he would come up with after practice, before practice... I think it helped my game out tremendously.”

And now that his hockey career has come to a close, it’s no surprise to those who know him that Pedrie is still involved in the hockey world.

“He loves hockey so much… I think he knew he had a future in hockey whether it was as a player or as a coach, in some way shape or form,” Olczyk said. “You could see that everyday when you saw him at the rink.”

As Penn State regroups for what should be an intriguing 2020-21 season, the obvious question marks surround replacing all-time program great L…

Coronavirus, ticket information for all Big Ten athletic programs | What precautions are being taken?

As the scheduled start of the 2020 college football season inches closer, Big Ten programs are beginning to outline their plans and contingencies for the offseason and beyond.