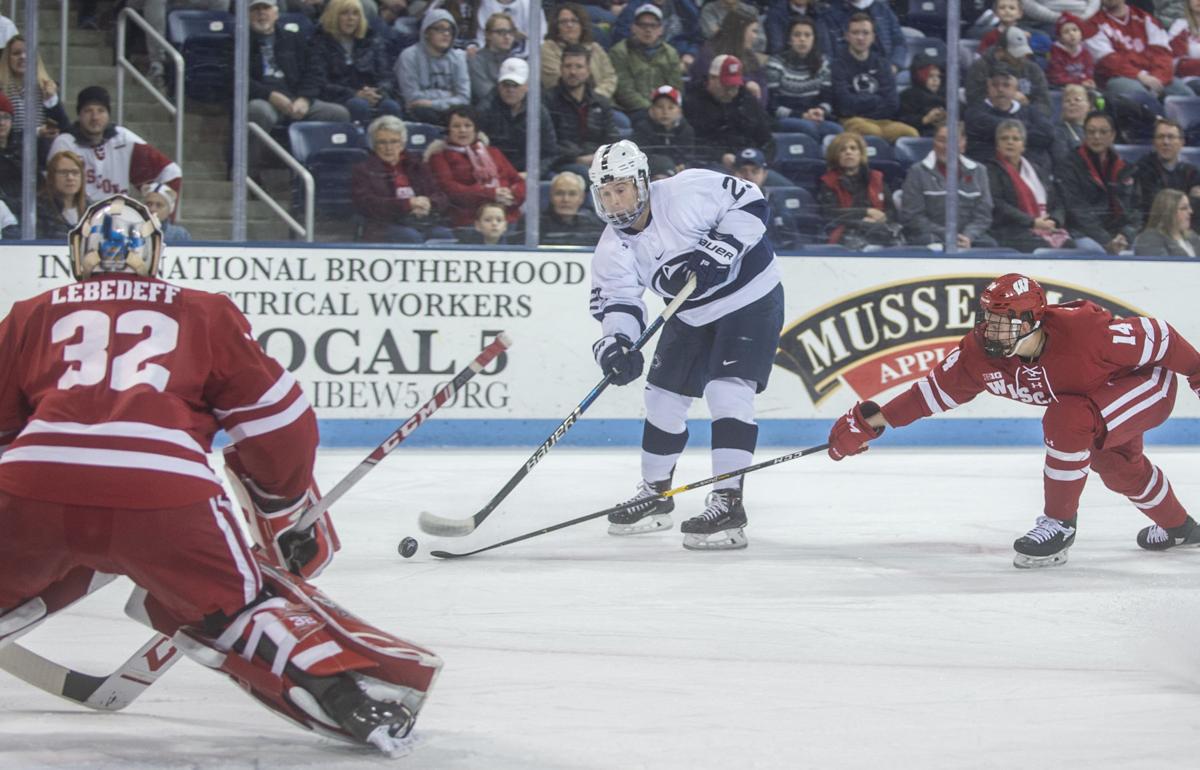 Blake Gober (23) shoots during the men’s hockey game against Wisconsin at Pegula Ice Arena on Friday, Feb. 22, 2019. The no. 19 Nittany Lions defeated the Badgers 8-2. 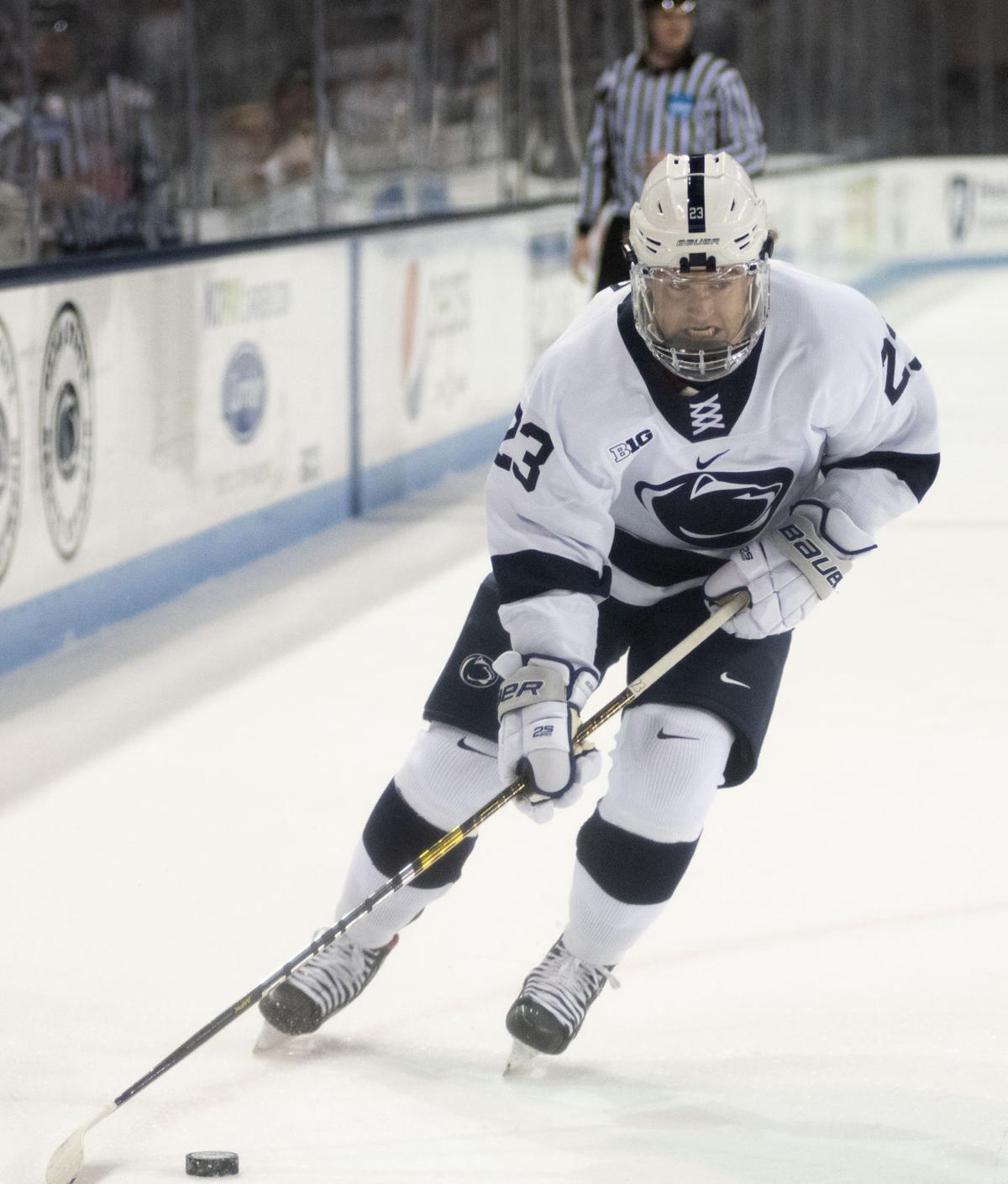 Forward Blake Gober (23) skates with the puck during the men’s hockey game against Minnesota at Pegula Ice Arena on Saturday, Feb. 22, 2020. 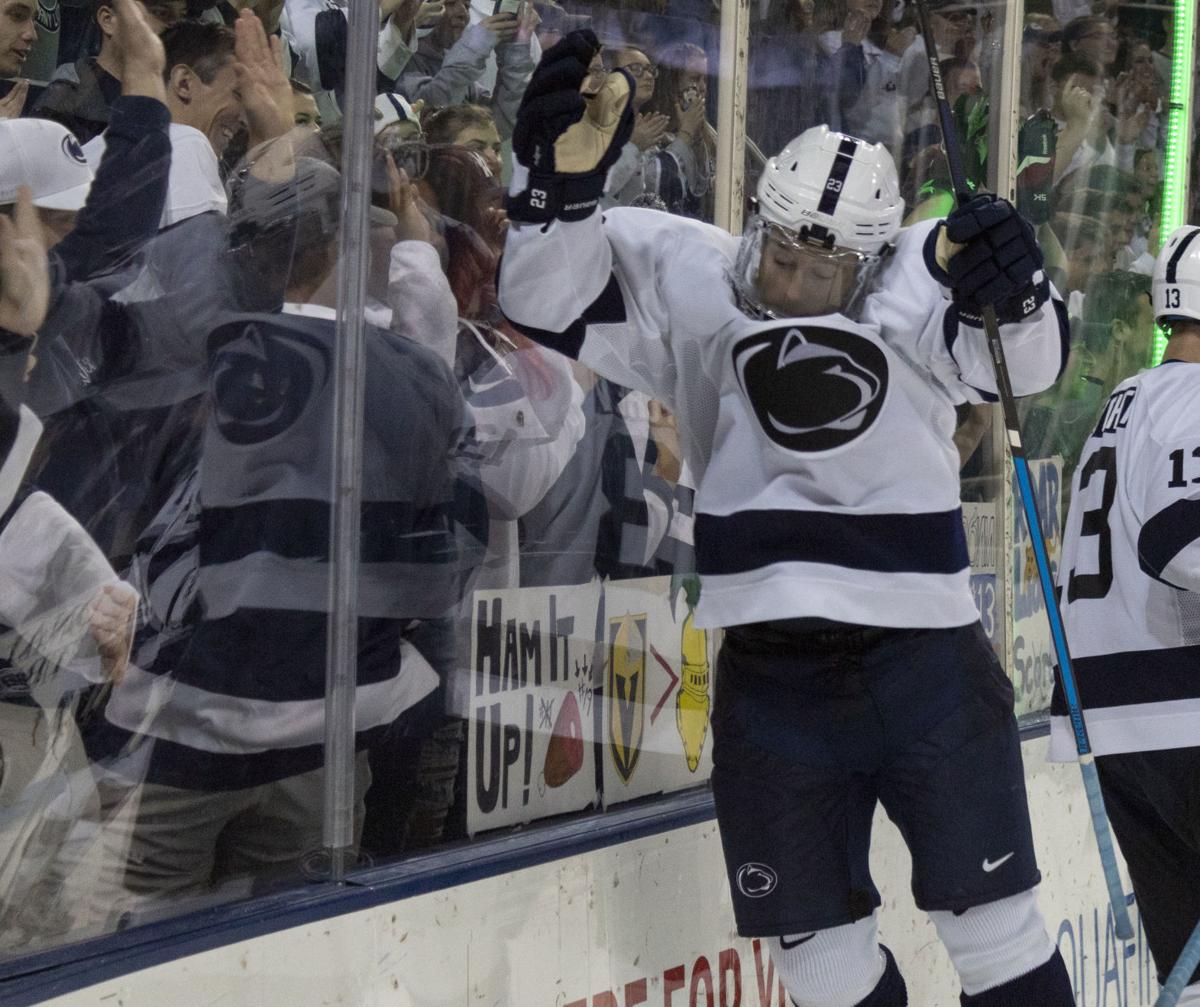 Blake Gober will suit up for a professional hockey team next season, in a country he has never been to.

Gober will be playing his first professional hockey season with the Comètes de Meudon, a France3 team.

“I’ve never been over there — to be honest, I’m kind of terrified of planes. It’ll be awesome, I’m really excited,” Gober said via phone call.

Gober won’t be heading to France alone, however, as he will play next season with his childhood friend and fellow Texan, Connor Hutchins, who played for SUNY Brockport.

“Me and Blake have known each other since we were about five or six, we grew up playing hockey together and we’ve kind of remained friends all throughout our hockey career,” Hutchins said. “We played together quite a bit when we were younger and when it was time to go to our junior hockey teams, we went our separate ways.

“We always had an idea that once we finished our college careers we would eventually try and play pro together.”

For both of them, it will be their first time overseas and living outside the United States.

“There’s a few guys actually from North America that are going over there as well, so we kind of know each other and have been texting back and forth a little bit,” Hutchins said. “There’s a little bit more familiarity there with other imports besides us.”

Hutchins and Gober plan on living together, but as the friends spend so much time together in the offseason, Hutchins doesn’t believe it will be difficult.

“I’m sure there’s going to be times when we’re a little bit sick of each other, but that’s nothing new at this point,” Hutchins said.

For now, Gober is training and getting ready for the upcoming season. With talks of pushing the season back, Gober is nervous about exerting himself.

“I don’t want to jump into it too quickly, but at the same time, I’ve had four months off. It’s a weird area where I don’t want to burn myself out but also I’m so sick of not skating and working out,” Gober said.

Season pushback or not, Gober and Hutchins are looking forward to playing professionally together for the first time.

Not the first former Nittany Lion to play in France, Gober reached out to former teammate James Robinson, who played the 2018-19 season with the Jokers de Cergy, a France2 team.

“Before I even made my decision, I reached out to Jim Robinson who went over there and played for a year,” Gober said. “What it’s going to be like, what you want to get in your contract, make sure everything's right.”

Gober said he will always look back fondly on his time at Penn State and those who helped him along the way.

“I’m older than all the guys in my class but I still look up to a lot of them,” Gober said. “As a freshman when I came in, [Vince] Pedrie was a huge guy that I looked up to because I played with him before. That made it easy to adjust.”

Having both played junior hockey with the United States Hockey League’s Bloomington Thunder in 2014, Gober and Pedrie have a relationship that goes back before Gober’s freshman season.

“A cool thing that the program does is they’ll assign a freshman with an upperclassman to go to with any questions, anything that’s going on class related or life related,” Pedrie said via phone call. “I already had that connection with Blake, so it made it easy to work together with him and make him comfortable while I was still there during his freshman year.”

Their prior relationship made Gober’s first season and Pedrie’s final season with the Nittany Lions a memorable one.

“To already have that history with him, playing junior hockey and then getting to share a season of college hockey with him was pretty great,” Pedrie said. “Anytime you can build a relationship like that, it doesn’t matter if you talk every week or every six months, you kind of just pick up where you left off.”

Guy Gadowsky and the other Penn State coaches also left a lasting impression on Gober and contributed to his growth both on and off the ice.

Gober attributes his growth off the ice to the culture the program promoted, which puts an emphasis on primarily “being a good person.”

“It’s tough to [explain] exactly what they did, but leaving school I’m a completely different person from when I came in, so much more mature. I owe it all to them,” Gober said.

When Cole Hults decided to forgo his senior season at Penn State to sign a contract with the Los Angeles Kings, it wasn’t a shock to those clo…