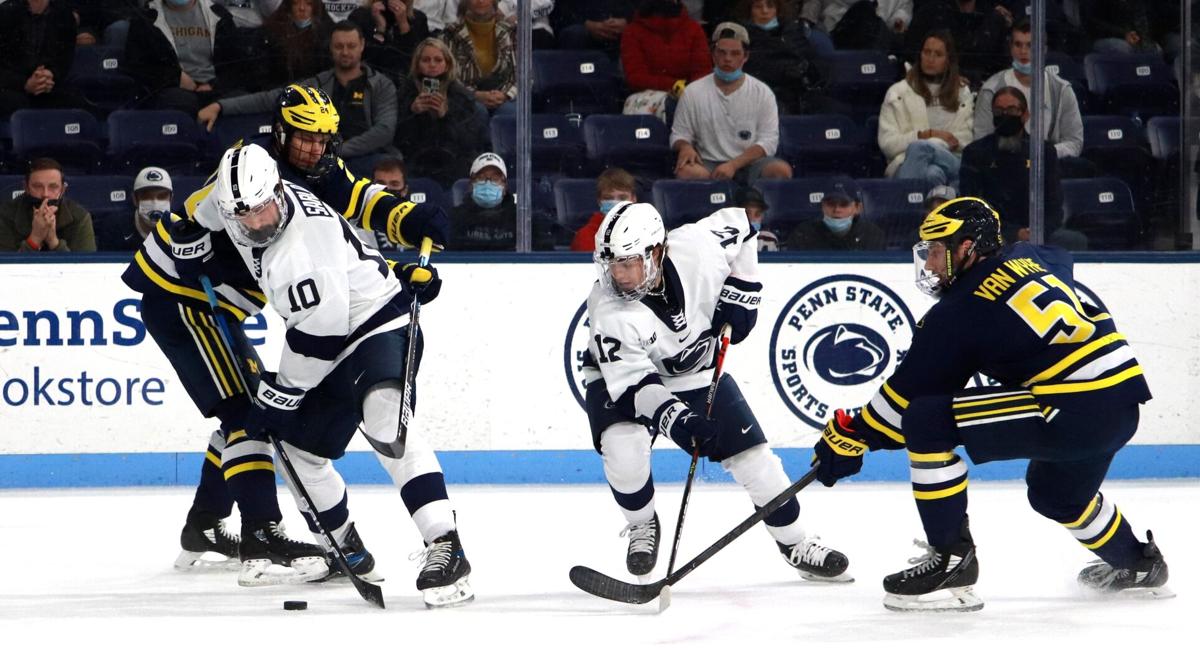 Forward Christian Sarlo (10) pushes back Michigan defense as he looks to pass the puck during the Penn State Men's Ice Hockey game against Michigan on Friday, Nov. 12, 2021 at Pegula Ice Arena in University Park, Pa. Penn State was defeated 6-2 against Michigan 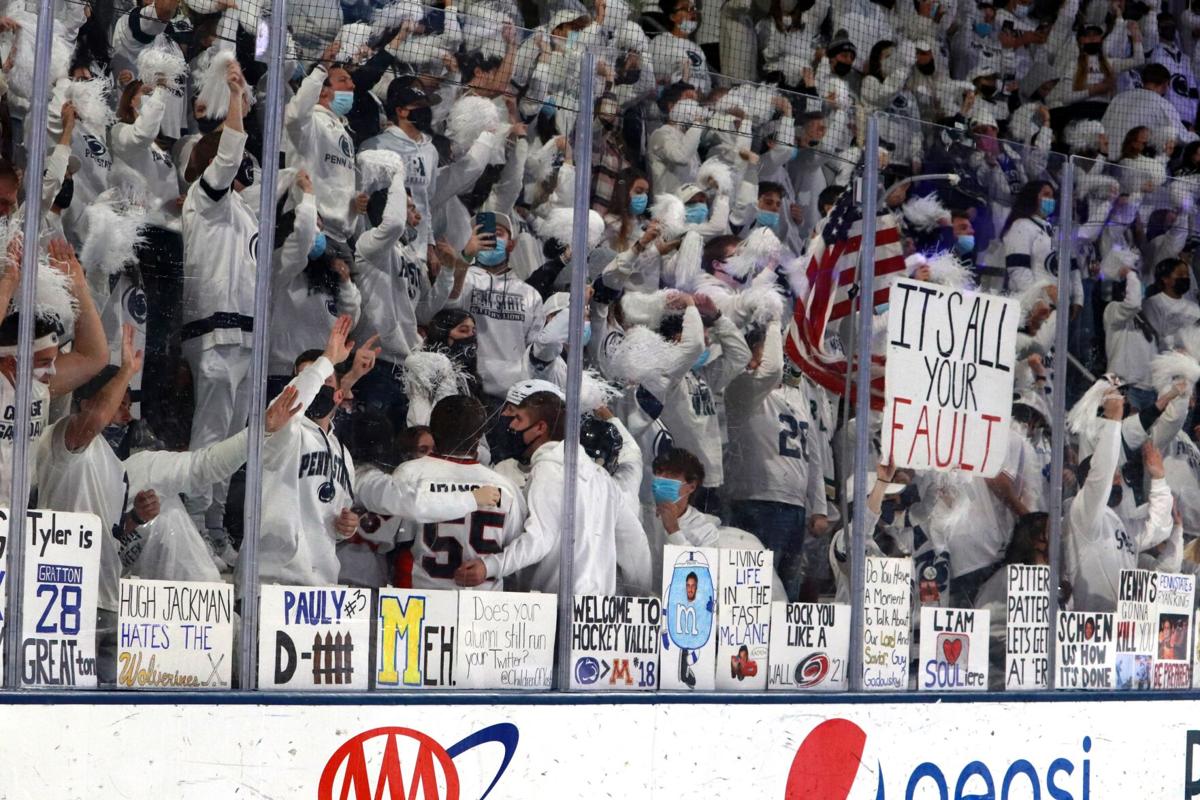 The Big Ten hasn’t yet shaped up to be exactly what was expected, but the field is starting to level as teams navigate through the beginning of conference play.

One team continues to separate itself as the best team in the Big Ten, and likely the country, while another is defying all preseason expectations.

Five teams in the conference are top-20 in the nation in scoring offense, and three of those five — Michigan, Notre Dame and Ohio State — are also top-20 in scoring defense.

As a result, those three squads also rank tied for third, sixth and seventh, respectively, in scoring margin and sit with the best three overall records among Big Ten teams.

While Minnesota ranks above both Notre Dame and Ohio State in the USCHO Coaches Poll, the Fighting Irish and Buckeyes have both impressed early on.

Here’s a rundown of how Big Ten teams have fared over the past few weeks.

Michigan is the best hockey team in the country… at least according to its ranking.

The Wolverines are ranked No. 1 for the second time this season, with the first instance coming back on Oct. 18 when the Wolverines were 4-0.

The maize and blue now sits at 10-2 and is headed into a set of home games against No. 14 Notre Dame as winners of four straight.

In every one of its wins this season, Michigan has scored at least three goals, which is part of why it is tied for first in the nation in scoring offense, tallying 4.33 goals per game.

From an individual standpoint, the Wolverines have arguably the most talented lineup in all of college hockey, boasting seven first-round picks — the most of any college team ever.

Leading that group is 2021 No. 1-overall pick defenseman Owen Power, who is tied for seventh in the nation in points per game.

Power sits alone at second in the country in assists, just behind his teammate and No. 5-overall pick forward Kent Johnson, who ranks second in the nation in points per game.

Top-ranked Michigan and its stacked lineup host the Fighting Irish on Friday and Saturday.

As predicted by almost nobody, Ohio State is impressing early in Big Ten play.

The Buckeyes are 7-3 overall and 4-2 against conference opponents so far, which is good enough for third and second-best, respectively, in the conference thus far.

These feats come despite being picked to finish last in the Big Ten in the preseason poll.

The No. 17-ranked scarlet and gray continue to win games against ranked opponents, including then-No. 16 Penn State and now-No. 7 Minnesota.

Before its most recent loss to the Golden Gophers, Ohio State had won four straight games and seven of its last eight.

While Ohio State boasts the 15th-best scoring offense in the country, its biggest strength lies on defense, where it ranks as the fifth-best unit in the nation in terms of goals allowed per contest.

Headlining the Buckeyes defense is the man between the pipes: freshman goaltender Jakub Dobeš.

The first-year player has been one of the best keepers in the country since taking over as the team’s starter, playing in each of the team’s last nine games, boasting a 7-2 record and one complete-game shutout.

He also stopped all of UConn’s shots in an overtime-win relief effort as well.

The Czech Republic native ranks second in the country in save percentage, stopping .946 percent of the shots he’s faced and fifth in goal against average, giving up just 1.389 tallies per game.

It’s safe to say Dobeš and Ohio State will keep proving nay-sayers wrong if they continue to shut down opposing offenses like they have.

A pair of weekend home games against Mercyhurst is next on the schedule for the Buckeyes.

The rest of the Big Ten

Newly-unranked Penn State is in jeopardy of dropping six straight games as it travels to Minneapolis to take on the seventh-ranked Golden Gophers.

Despite an underwhelming 7-5 record, Minnesota still carries one of the most talented rosters in the country and is coming off a shutout victory over the red-hot Buckeyes.

Notre Dame is on a four-game win streak of its own thanks, in large part, to Big Ten Third Star of the Week goaltender Matthew Galajda, who gave up just one goal in a sweep of Wisconsin.

The Badgers are off to a measly 4-8 start, though their strength of schedule might outweigh that of any other team in the country.

Michigan State will travel to Madison this weekend after sweeping its home-and-home series with Ferris State last Thursday and Saturday.

All Nick Lee needed was 54 seconds.

Penn State will make its return to the ice on Friday as it travels to New York to take on a familiar foe.

After Penn State took the first match on Friday, Minnesota came out on top in a tightly contested second game to close out the series in 3M Ar…

The first domino has fallen for Penn State in this year’s transfer portal.