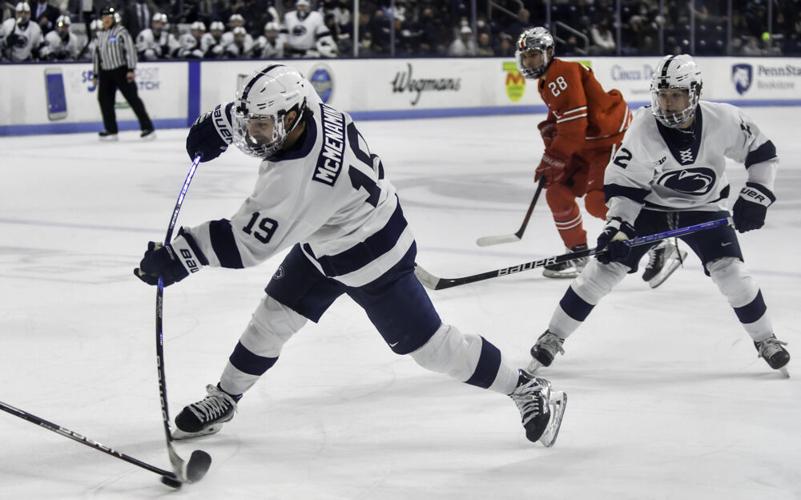 Penn State forward Connor McMenamin (19) attempts to shoot the puck into the net during the Penn State men's hockey game against Ohio State on Friday, Jan. 28, 2022 in University Park, Pa. The Nittany lions defeated the Buckeyes 2-1 in a shootout. 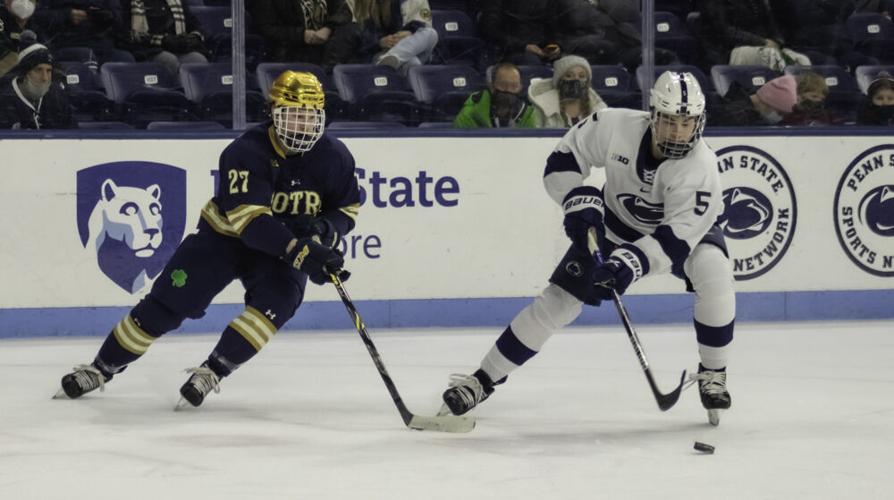 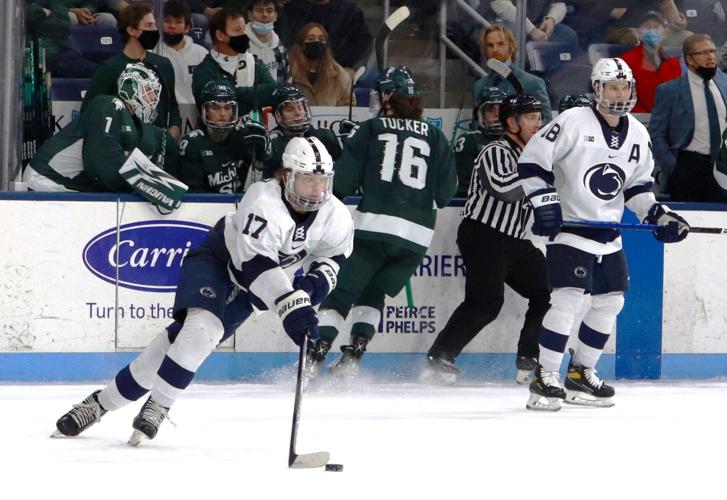 With national honors given to multiple players last season, the Big Ten has plenty of talent to go around.

Teams around the conference have added and lost key players this offseason.

Here is how each team ranks heading into the 2022-23 campaign.

The Wolverines ended their year going 31-10-1 overall and were backed by four of 2021’s top-5 NHL Draft picks.

Three Wolverines were also honored as All-Americans for the 2021-22 season, including Matty Beniers who earned a first-team spot after racking up 20 goals and 23 assists last season for the maize and blue. Two of his teammates, Luke Hughes and Owen Power landed spots on the second-team All-American roster. Unfortunately for the program, Michigan lost two of the three to the NHL after last year.

Despite this, Michigan returns Hughes and top goaltender Erik Portillo, in addition to adding a stacked 11-player freshman class.

A Minnesota native, Meyers proudly led the Golden Gophers in 2021-22. Earning Big Ten Player of the Year, a unanimous first-team All-Big Ten and an eight-game point streak into the Frozen Four — the junior was not afraid to shine.

Despite losing Meyers to the Colorado Avalanche, the Gophers are still on track to sit toward the top of the conference after hauling in Neutral Zone’s top recruiting class in the nation.

Notre Dame ended its season third in the Big Ten, with only a one-point lead over Ohio State.

Going 27-11-0 with 122 goals scored, the Irish sat too close for comfort next to Ohio State, who led them in goals by three tallies.

Despite a solid year, the squad came up short in the NCAA Tournament, falling to Minnesota State 1-0 in Albany, New York.

To combat this loss, the Irish brought in four new transfers with hopes of taking the next step.

Despite finishing near the bottom of the Big Ten rankings, Wisconsin is poised for redemption this coming season.

Goalie Cameron Rowe faced criticism after struggling with an .861 save percentage through 14 games played. Jared Moe, on the other hand, cranked his save percentage to .917, which offered a lot more stability in the defensive third.

With Rowe’s departure to Western Michigan, the Badgers will turn to Mercyhurst transfer Kyle McLellan to fill the gap alongside Moe.

Penn State proved to be a worthy opponent to the Badgers, taking down the Badgers in three of their four matchups, but the Nittany Lions also disappointed during their 2021-22 season.

Guy Gadowsky and crew fell just a little short of a miracle Big Ten Tournament run, ripping the rest of the Band-Aid off of the disappointing season.

The 3-2 loss to Minnesota in the semifinals cemented the team’s fate, as it once again proved that third-period closes were a weak spot for the team after surrendering the game-winning goal late in the frame.

While it added two impressive transfer forwards, the Nittany Lions likely worsened in terms of goalie depth after the loss of Oskar Autio.

Led by Georgii Merkulov’s 20 goals and 34 points, Ohio State finished the year with 43 points, which left it practically sitting on the lap of Notre Dame.

Fans, as well as coach Steve Rohlik, hope for a breakout 2022-23 season after falling out of first place midway through the 2021-22 season.

Coming up just short of the NCAA Tournament, after a quarterfinal Big Ten Tournament loss, Ohio State is hoping to chalk down last season as nothing more than a blip.

With very little reported action in the transfer portal, it’s unclear if the Buckeyes will be able to replicate a similar success that it ranked No. 16 at the end of the season.

While Gadowsky and Rohlik’s squads work through their weak points, Michigan State hired a new coach to address its struggles. Coach Adam Nightingale will look to piece together the distraught and title-hungry Spartans.

A green and white alumnus, Nightingale hopes to bring strong recruiting and player development skills to East Lansing, Michigan, after an abysmal 12-23-1 record. Scoring only 76 goals, the Spartans ended the 2021-22 run with only 15 points, trailing Penn State by two and Wisconsin by four.

Erik Middendorf led the team in goals, collecting 12 of the team's 76, and all things point to the rising senior returning another year. Fresh talent and the loss of key players, paired with the addition of a new coach can have major impacts on team chemistry, training and overall performance.

While the Big Ten has not yet released its complete 2022-23 conference schedule, fans can get ready to head to Pegula Ice Arena to cheer on Penn State when it kicks off its season against Canisius on Oct. 7 at home.

Coming off a season that they came up just short in, coach Jeff Kampersal and Penn State wil…

Time and time again this offseason, James Franklin has highlighted the increased depth he feels he has on Penn State’s 2022 roster. Typically, it’s also been in the context of how to manage a roster in a college football era so heavily influenced by the transfer portal.