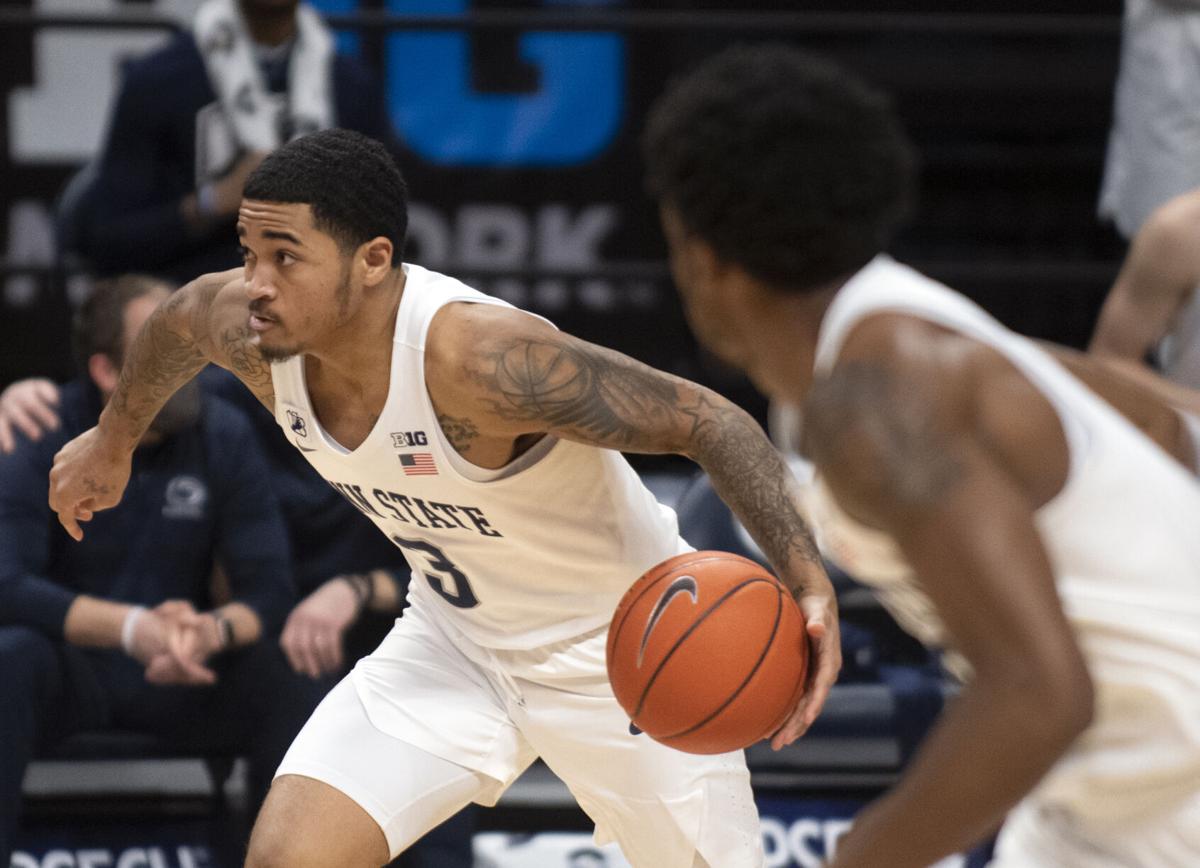 Guard Sam Sessoms (3) dribbles the ball down half court during the Penn State men’s basketball game against Minnesota on Wednesday, March 3, 2021 at the Bryce Jordan Center in University Park, Pa. The Nittany Lions defeated the Golden Gophers 84-65. 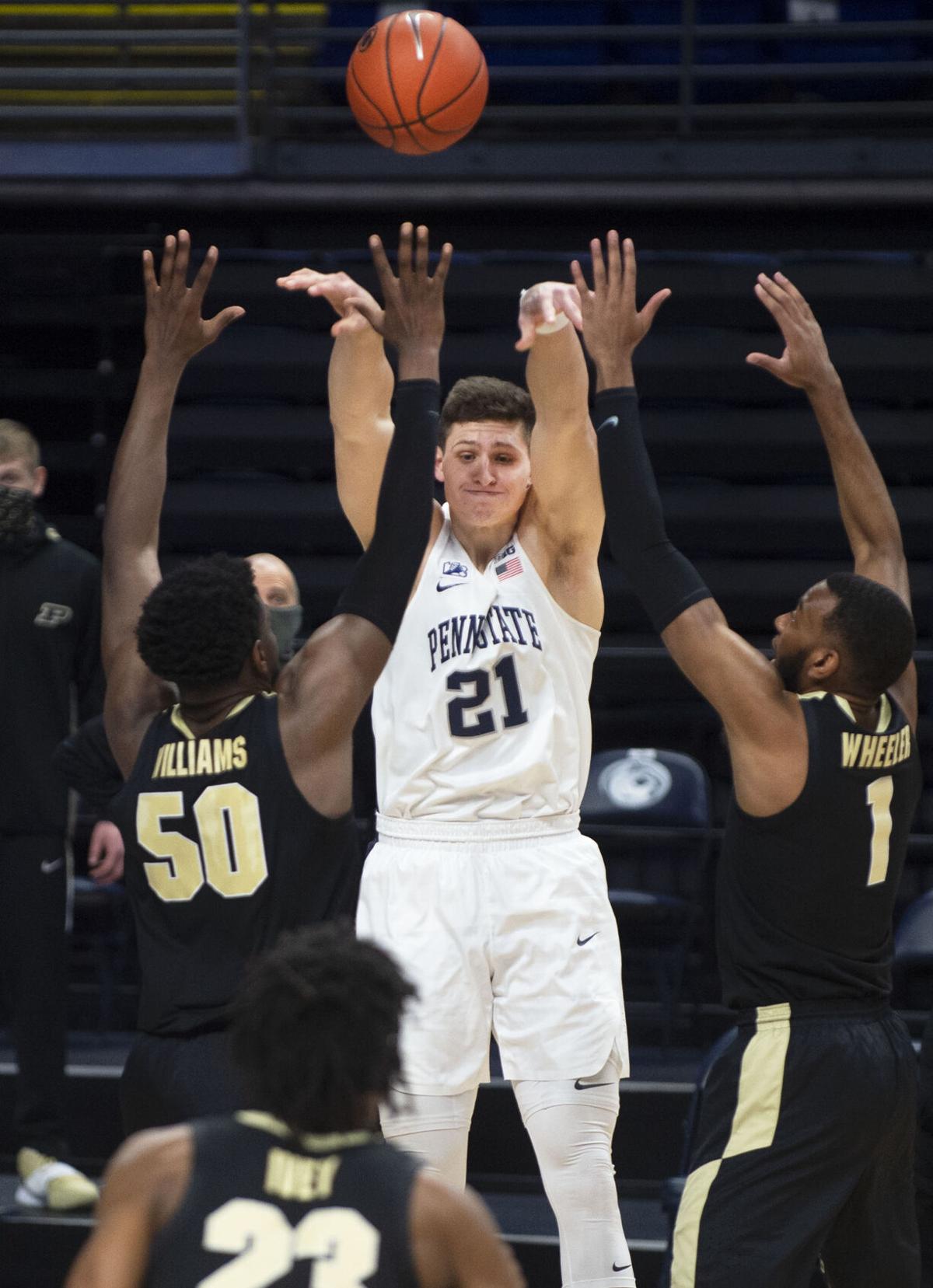 Penn State’s offseason could be described as anything but ordinary.

Interim coach Jim Ferry, who took over for the 2020-21 season in light of former coach Pat Chambers’ resignation, wouldn't be returning to Happy Valley — neither would five Nittany Lions.

Despite fifth-year senior center John Harrar and sophomore forward Seth Lundy also entering their names into the portal, they decided to stay with the program, along with Myles Dread and Sam Sessoms.

Coach Micah Shrewsberry is thankful he retained players from last season because of their knowledge of the Big Ten and the team’s culture.

“Those guys are helpful because they know the Big Ten as well,” Shrewsberry said. “The guys that have been here, they understand what we're walking into, and they're helping the new guys understand what it takes.”

But their qualities, combined with the leadership of Harrar, Lundy and Dread, provide a foundation for Shrewsberry to build off of.

“You have guys like John, Seth, Myles, Sam and even the young guys Dallion and Caleb who didn't get as much of an opportunity last year, but they were around here,” Shrewsberry said. “The competition level and how far they go has been ingrained in them.

“Caps off to what they've done before here. That's something that you can build off of.”

Penn State’s roster features a bevy of newcomers, some of them already seeing playing time at the collegiate level.

According to Shrewsberry, those newcomers contribute to the competitive atmosphere in practice, as well as leadership.

“For as great of a competitor as John is and how hard he works, Greg [Lee] leads right there next to him,” Shrewsberry said. “To have guys like that leading the charge, whether it's old guys, new guys, whatever – they're coming together. They're pushing each other.”

However, Shrewsberry circled back to the standard set by players who have been in the program for a number of years, saying their experience within the Big Ten conference will be crucial to the team’s success.

“It's good to have guys that have been in the Big Ten and understand what it takes to go win at Michigan State – but they've done it,” Shrewsberry said. “They've been there, they've seen it. We have other guys that can do it and lead in that way as well.”

Not only do Harrar, Lundy, Dread and Sessoms provide in-game experience having played against tough conference opponents, but they also bought into Shrewsberry’s vision of a championship team.

“To win in this league, you have to play as hard as possible,” Shrewsberry said. “That's something that we’re able to build off of right now.”

Shrewsberry preaches a team-first mentality, something he believes the returners responded well to upon his arrival to State College, along with their stellar work ethics.

Along with addressing the fundamentals and small details of the game, Shrewsberry believes the combination will pay off once the Nittany Lions begin their season.

“I'm a stickler for details and I’m a stickler for fundamentals,” Shrewsberry said. “We’re trying to build it in that way. It's team, team, team – everything. I'm really focused on our team and how we're making each other better and serving others instead of thinking about myself all the time.

“That's what we're going to push. I think that's when you start to build a championship culture.”

Penn State opens up the season on a new chapter — the Shrewsberry chapter.

Fourth-ranked Penn State welcomes No. 5 Rutgers for a Big Ten matchup on Friday and Bucknell for a nonconference game on Saturday at the Field…

The Daily Collegian’s Sports Speak Podcast returns this week with a new episode. Co-hosts Tanyon Loose and Spencer Ripchik cover a variety of …