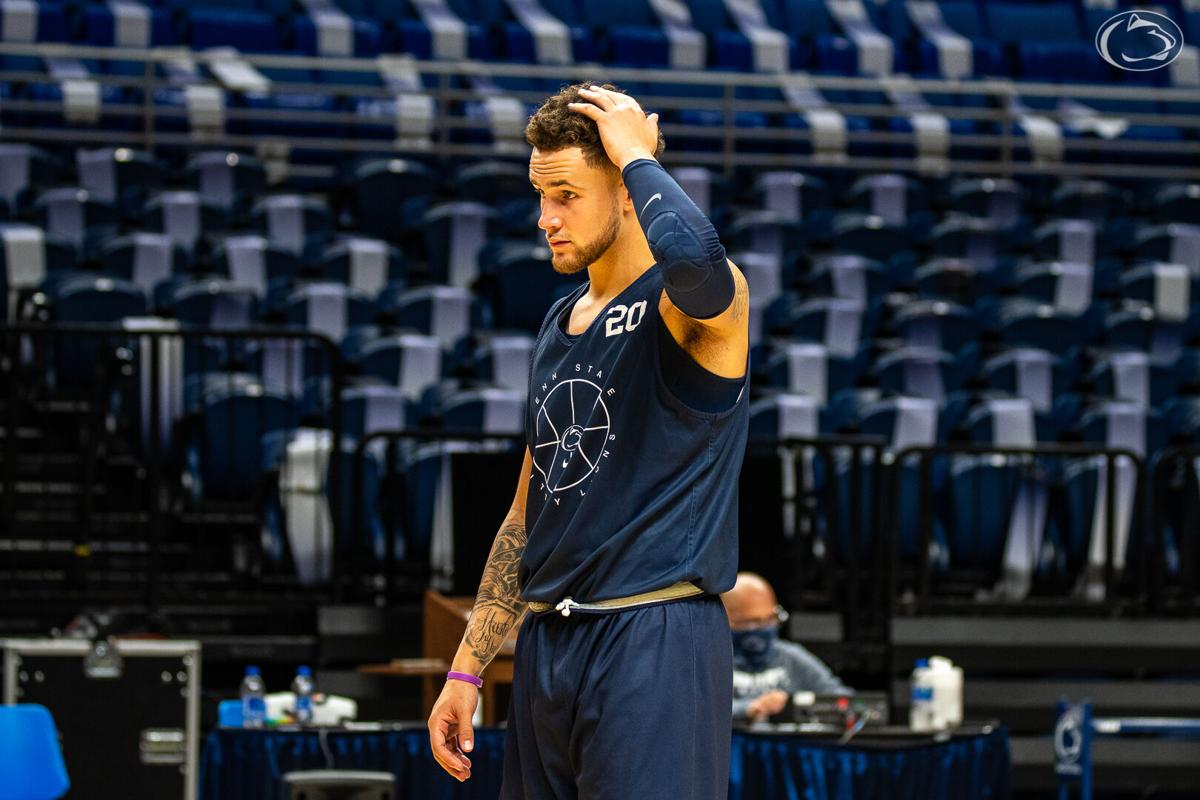 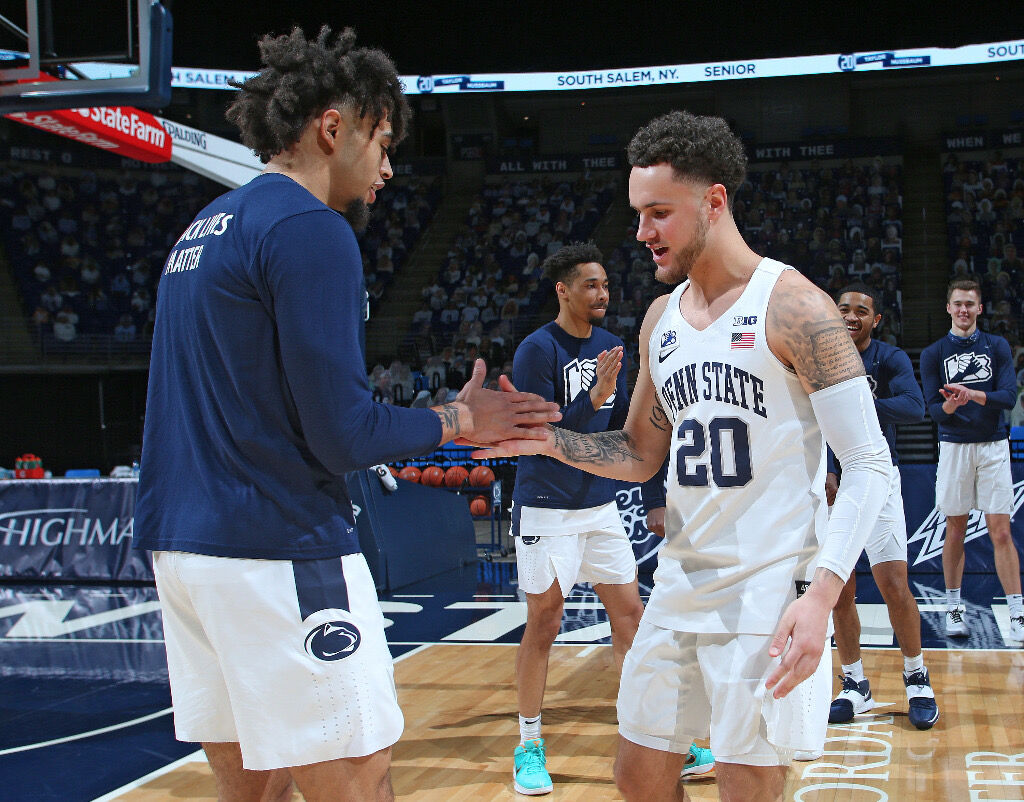 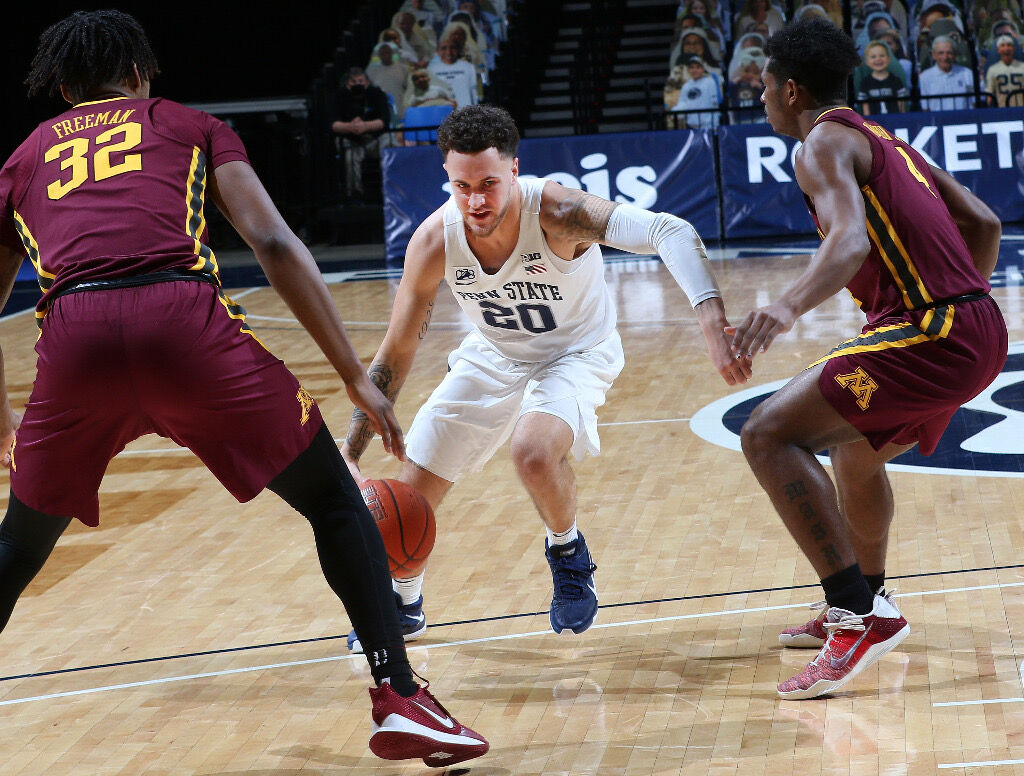 Former Penn State men's basketball player dribbles the ball during a game against Minnesota at the Bryce Jordan Center. 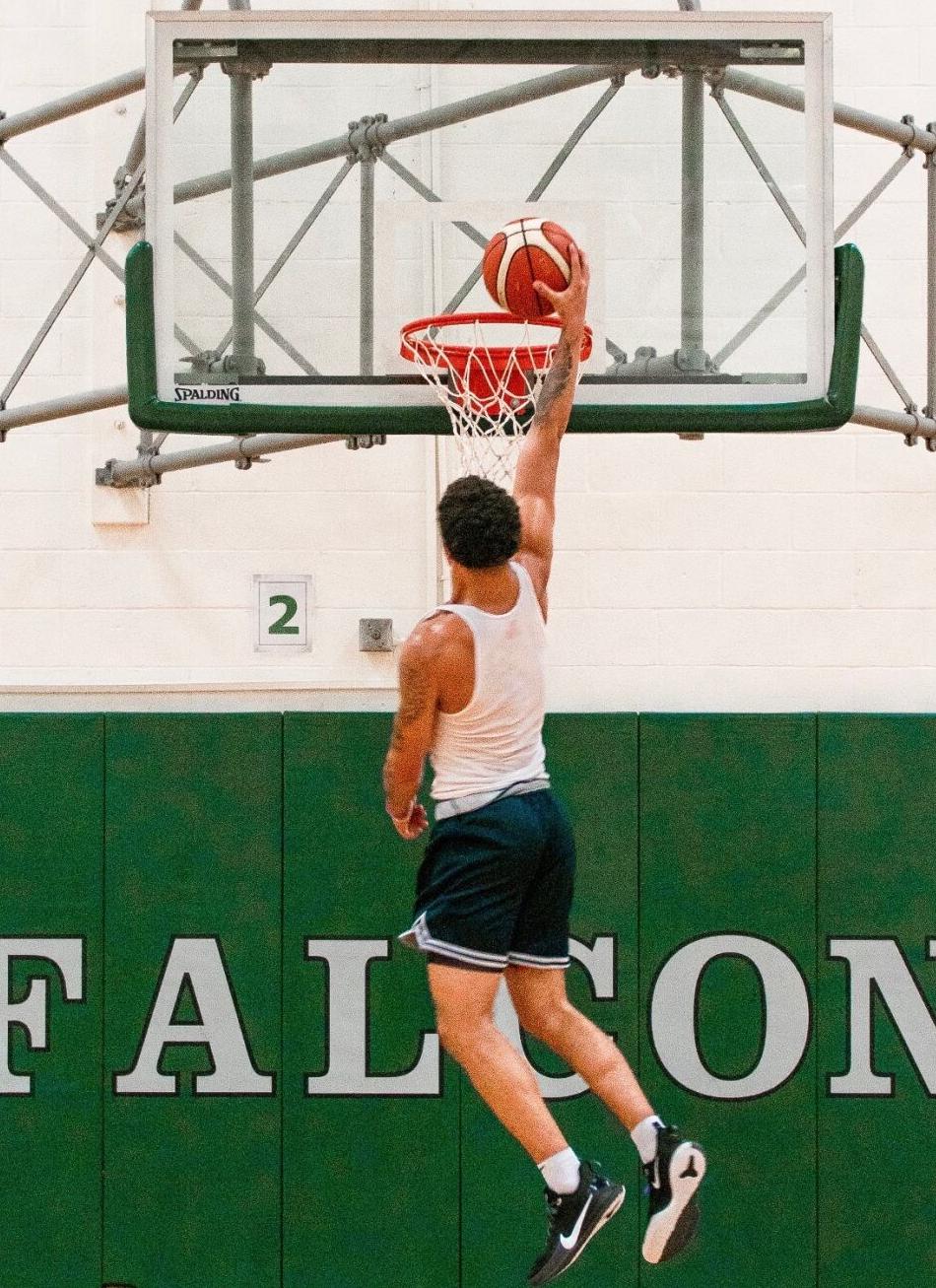 For many Penn State athletes, the goal isn’t just to play at the collegiate level — but to excel on a professional stage.

And like many young athletes, former Nittany Lion Taylor Nussbaum wanted to replicate what he saw from his favorite basketball players growing up.

“My dream was to be like Derrick Rose. I’m a Knicks fan, but in elementary school, I loved watching Derrick Rose and how he played.” Nussbaum told The Daily Collegian. “But like every little kid growing up, I wanted to be the greatest player in the world.”

Nussbaum’s path to achieving his goal ended up being harder for him than the average hooper. He wasn’t a highly touted recruit out of highschool, which left him having to walk on at Penn State.

However, the Nittany Lions’ recruiting coach Ross Condon saw that Nussbaum could help take his team to the next level.

“I really thought that he was a good kid and would fit our program and what we were doing at Penn State at the time,” Condon told the Collegian. “He had a pretty solid high school career, so I thought he could be someone in practice who would push our guys.”

Nussbaum filled up the stat sheet in high school, scoring his 1,000th point in his senior season and helping lead Playmaker Academy — his AAU team — to the 2012 national championship game.

However, in four years at Penn State, Nussbaum only saw the court for 17 minutes.

The lack of playing time put the thought of transferring in the back of Nussbaum’s mind, but he liked the staff in Happy Valley too much to leave.

“I had a bunch of schools hit me up and say, ‘You can come and play here and start or get good minutes off the bench,’” Nussbaum said. “Honestly, I loved [Patrick] Chambers, [Keith] Urgo, Condon, and [Jim] Ferry, and I loved the culture we had here. I loved my teammates, and I wanted to finish what we started here. That is why I stayed.”

Nussbaum may not have had too much of an impact on the court, but those within the organization noticed the impact he made behind the scenes.

His off the court presence caught the eyes of his former head coach Chambers.

“He was enthusiastic.” Chambers told the Collegian. “That's what you need on a team. If someone was down, he would build them up. It’s a critical position on the team.”

While his time on the court may have been short, Chambers remembers how he felt when Nussbaum’s first points went through the net against Maryland Eastern Shore in his junior year.

“Internally, you know you're rooting hard for him inside,” Chambers said. “You know at the time you may not be able to display that because you are the head coach, but internally you are so happy, and the kid deserved it.”

Nussbaum’s hard work paid off, as he earned himself a scholarship in his junior campaign.

Chambers said he thought Nussbaum had all the attributes deserving of a scholarship.

“He was a hardworking student. He was a great teammate in the locker room, providing the effort and energy on and off the court on a daily basis,” Chamber said. “When you check all of those boxes, it was an easy choice to make.”

Even with a scholarship under his belt, Nussbaum still had to deal with adversity away from the court.

When Nausbaum was 19, his father Jay died.

However, the Penn State staff tried its best to be there for the college student. Condon, who recruited Nussbaum, stood out in particular to the guard.

“He always had my back no matter what,” Nussbaum said. “He was really almost like a father figure to me because I lost my father when I was younger, so he was a huge help while I was at Penn State.”

After graduation, Nussbaum received a direct message from an agent on Instagram and was interested in what he had to offer.

Nussbaum sent in some of his practice film and managed to get an opportunity to try out for the Memphis Hustle, a G League NBA affiliate.

He said he was really there to try out for some of the Israeli teams, and Nussbaum was happy with his performance that day — and it worked out in the end for him.

“I played really well there and had a bunch of people hitting me up, and that's how I got into this situation,” Nussbaum said.

He signed a professional contract with Hapoel Hevel Eilat to play overseas in Israel on July 10. He was offered to play in other countries as well but chose Israel over the rest.

“I looked at Puerto Rico, Portugal and Mexico,” Nussbaum said. “I didn’t want to go somewhere that would put me in a worse situation, and if I went there to play they wouldn't speak English. Israel is a good league, and they pay good money there.”

The professional opportunity had his former coaches excited — he was finally getting a chance to make his dream come true.

“I thought it was awesome,” Condon said. “Now Taylor is getting to do something that he loves.”

Being from South Salem, New York, Israel is a little bit outside of Nussbaum’s comfort zone.

He said he does have some expectations for his new home overseas.

“I expect it to be hot,” Nussbaum said. “It's gonna be different because there is a different culture and different language. It is going to be something that I am going to have to get used to. It will be fun seeing the world, and I am looking forward to that.”

Nussbaum might not be totally prepared for the new atmosphere in Israel, but he said he thinks his time in the Big Ten has more than prepared him for his new basketball endeavors.

“There is no Lamar Stevens in this league,” Nussbaum said. “I think there are more opportunities for me to succeed in this league than in the Big Ten.”

Before Nussbaum left for Israel, his former coach had some advice on how to succeed in his next chapter.

“Be the first one in the gym and the last one out the gym,” Chambers said. “Be the hardest worker on the team and [a] be-it-all guy. Organizations want that.”

Nussbaum has the background to take on his new adventure overseas, and he said he’s ready and excited to get going.

“I'm excited to just get on the floor and contribute in a lot more ways,” Nussbaum said. “I'm just excited to play basketball and do what I love.”

Nussbaum’s path to the professional stage may not be similar to other Penn State athletes’, but he said he’s proud of how far he’s come and is ready to keep pushing.

“I think just to come this far is a great accomplishment,” Nussbaum said. “To play professional basketball on any stage is something I take a lot of pride in. I wouldn’t say I am done now, but I am definitely satisfied with what I have accomplished so far.”

After a tumultuous year followed by numerous players leaving the program, Micah Shrewsberry …

With the summer session coming to a close, Penn State’s new head man on campus is starting to adjust to his role.