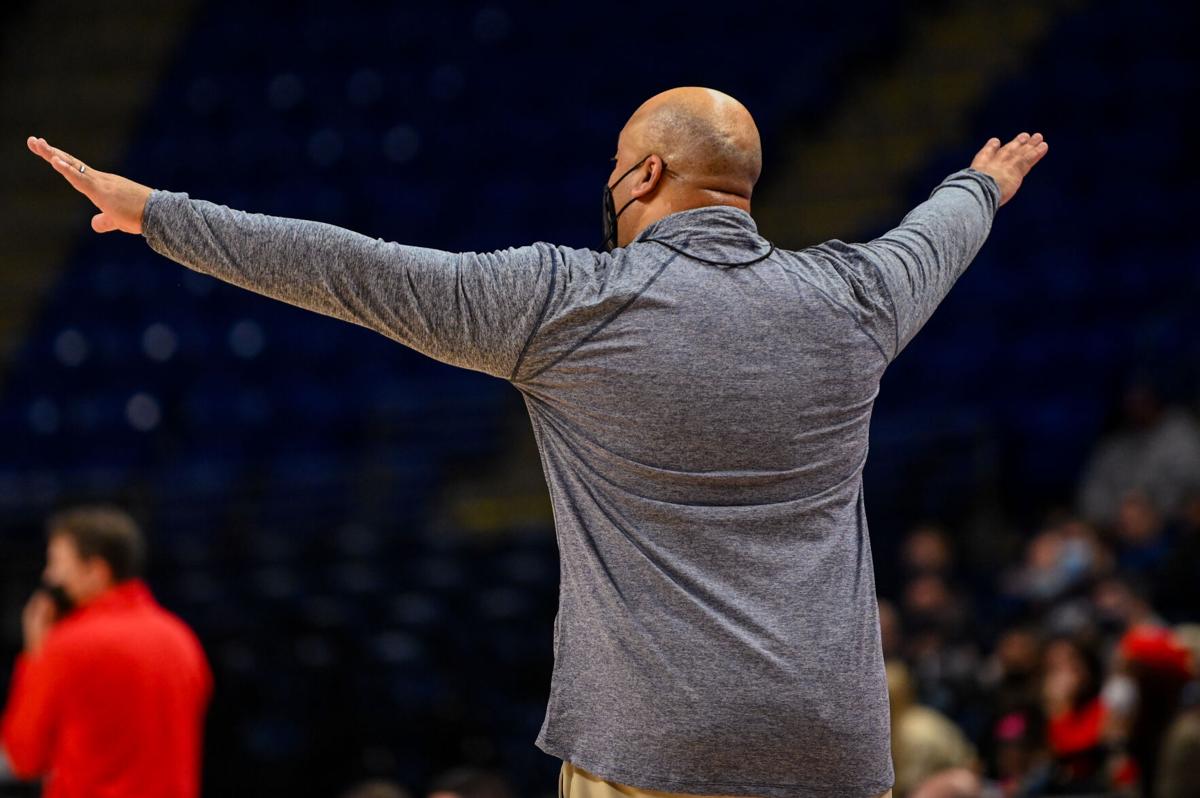 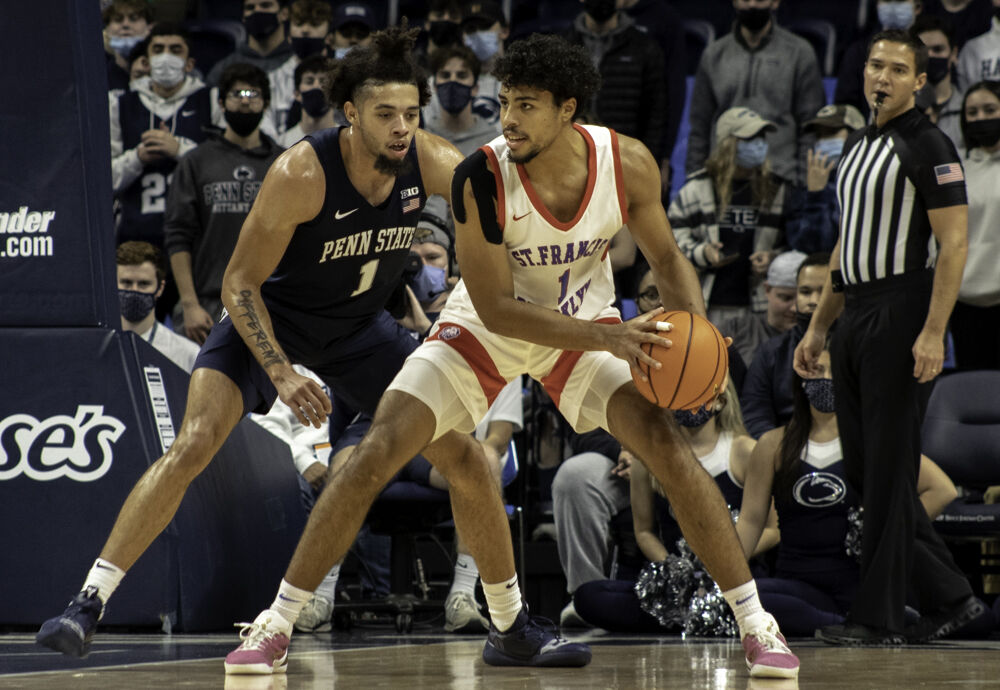 Penn State forward Seth Lundy (1) guards St. Francis forward Patrick Emilien (1) as he looks for a teammate to pass the ball to during the Penn State men's basketball game against St. Francis game at the Bryce Jordan Center on Thursday, Nov. 18, 2021 in University Park, Pa.  The Nittany Lions defeated the Terriers 74-59.

Thanks in large part to how its defense has played in recent games, Penn State has been a slightly above average team to kick off its season.

The Nittany Lions are coming off the Emerald Coast Classic in Niceville, Florida, where the blue and white lost to LSU 68-63 in overtime and then won the next game 60-45 against Oregon State.

The two Power Five teams were just the start of a long stretch of challenging games coming up for coach Micah Shrewsberry’s squad.

In Week 4 of college basketball action, Penn State faces some of its toughest competition yet that will surely test its defense.

The Nittany Lions draw Miami for the ACC/Big Ten Challenge and then will start conference play Sunday against Ohio State.

So far this season, Shrewsberry thinks his defense has adapted well to adversity, especially in the quick turnaround of games against Oregon State.

“We had to guard in a system for Oregon State,” Shrewsberry said. “We did not have the same time to prepare that we did for LSU. We had to trust in what we did this summer and in fall practices to guard those guys.”

At one point against Oregon State, Penn State was in the driver's seat, but near the end of the game, the Beavers started clawing at the Nittany Lions’ lead.

“No disrespect to Oregon State or anything like that because I think Wayne Tinkle is a really good coach, and I think he is one of the nicest human beings I have ever met, but they shouldn’t have scored 40,” Shrewsberry said. “That's where we let up. We thought the game was over, and there were eight minutes left.

In preparation for Miami and Ohio State, the team will spend time in the film room evaluating the mistakes it made in the previous two-game stretch.

Even though Penn State took LSU into overtime, it was still not able to clamp some of the Tigers' best playmakers.

After Shrewsberry’s midweek press conference, he said he was going to go right up to the film room and show his team the mistakes it made defensively.

“I think there are areas where it’s not perfect,” Shrewsberry said. “I'm gonna show us clips of 30 possessions defensively where we can do better.”

Every Penn State player goes and watches film with Shrewsberry, and it’s still something senior guard Jalen Pickett is getting used to as he arrived this summer from Siena.

Pickett has been through numerous coaches before arriving in Happy Valley, and he said he thinks what separates Shrewsberry from his previous coaches is his “attention to detail.”

“He knows basically every play that other teams could have run, and he's calling out every play before they even get down to court,” Pickett said. “He's telling us where to be, how to help, how to rotate and he's just putting us in spots to be successful.”

The Siena transfer said Shrewsberry’s background in the NBA as an assistant for the Boston Celtics pushes him over the edge.

He said spending time with an NBA coach compared to a regular college coach makes his knowledge of the game superior.

For Shrewsberry, though, his defense is nowhere near at the level he wants it to be at yet, as UMass dropped 81 points on Penn State with 13 3-pointers.

However, he said the Nittany Lion defenders are trending in the right direction when it comes to stopping the deep shot.

Even with the defense starting to heat up, Shrewsberry still said his team has a lot to improve upon — especially with the heart of the schedule coming up.

“I'm never gonna be satisfied with it,” Shrewsberry said. “In terms of how we play, you can hear my voice right now, that's all from yelling about defense, what we're not doing and how we need to be better at it.

Penn State has had an up-and-down season early on, but it finds itself two games above .500 …

After going 1-2 in the Gulf Coast Showcase, Penn State will continue its season and play Boston College on Thursday night in Chestnut Hill as …

After dropping a close loss to LSU last Friday, Penn State came back to dominate Oregon State by 15 points the very next day.

Just weeks after Dwight Galt III announced his retirement as Penn State's assistant athletic director for sports enhancement, the Nittany Lions have found his replacement — or rather replacements.