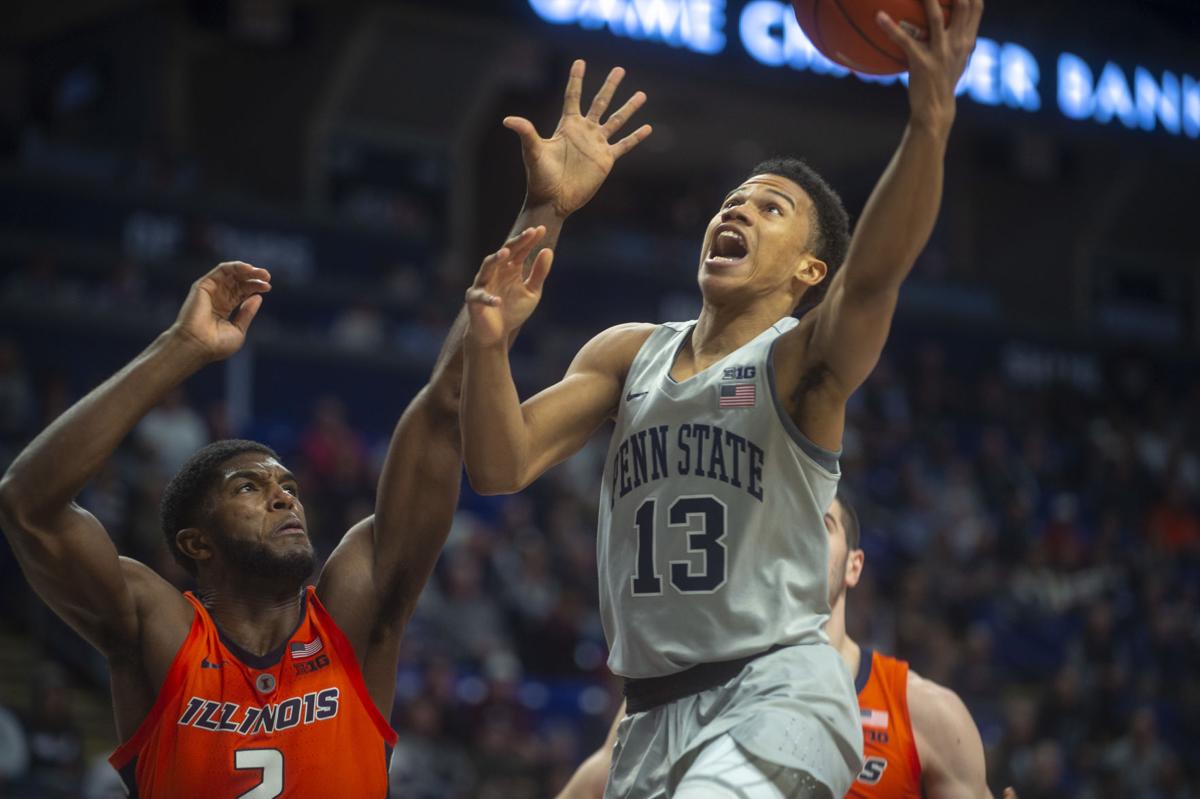 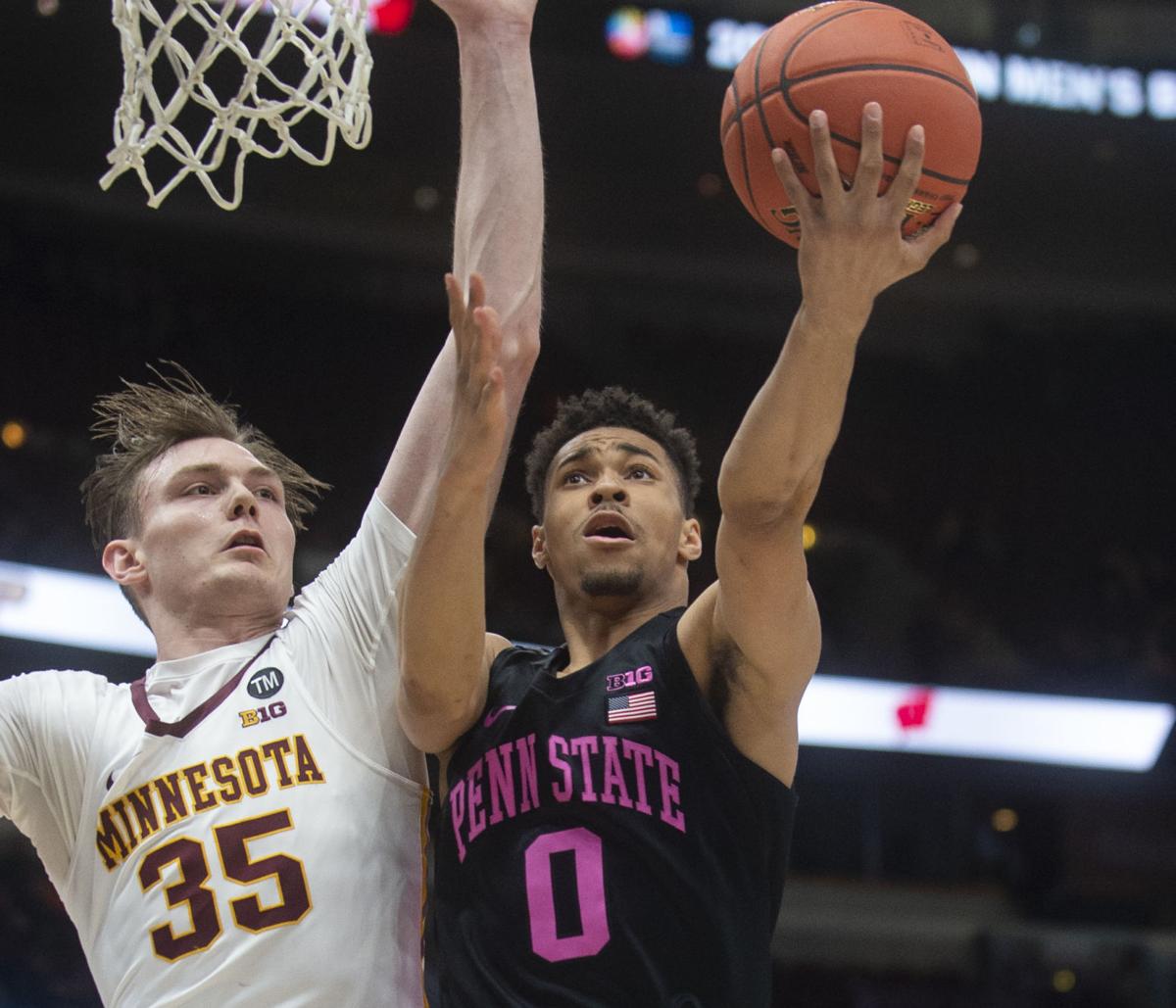 Guard Myreon Jones (0) has his shot attempt blocked during the game against Minnesota in the Big Ten Tournament in the United Center on Thursday, March 14, 2019. Minnesota defeated Penn State 77-72.

When Rasir Bolton entered the NCAA transfer portal in April, I smelled smoke but didn’t think there was a fire.

The 6-foot-2 guard had just come off a freshman season during which he averaged 26.9 minutes per contest and started nine games.

Sure, none of those starts came in the final 15 games of the season, and he shot a lowly 31 percent from the floor over the course of what would end up being the last six matchups of his Penn State career.

But with no incoming recruit who fit his mold and with the Nittany Lions in search of a ball handler with the ability to occasionally explode offensively, it seemed as though he was going to have an opportunity to play a crucial role during his sophomore campaign and beyond at Penn State.

At Monday’s media day, player responses were mixed as to whether Bolton’s decision to depart Happy Valley was surprising.

But what was a consensus was that the Nittany Lion backcourt is deeper today than it was at the end of last year, with or without the smooth and shifty Bolton.

Depth isn’t something Penn State boasted last season, especially in the wake of Shep Garner and Tony Carr’s exits from the backcourt.

The guard rotation consisted mainly of Myles Dread, Jamari Wheeler and Bolton, and any combination of the three stunted the Nittany Lions’ performances in some capacity.

Dread and Bolton were both freshmen who went through the occasional slumps to which first-year players are prone.

A combination of the offensively-minded Bolton and stout defender in Wheeler meant a level of deficiency from the guards at their different respective ends of the floor, and Wheeler and Dread each had limits to their offensive versatility.

Fellow freshman Myreon Jones was occasionally inserted among the trio, but he was streaky at best last season. Like the team as a whole, it seemed like the guard play rarely meshed, and when it did, it wasn’t for extended periods of time.

But this season, Chambers and his team believe the growing pains will be less pronounced. He still hasn’t settled on a starting lineup — which Chambers referenced as a rare notion for him at this point on the calendar — and he’s got a mix of skillsets and experience levels to choose from.

Dread should take a step forward after finishing last season only one made 3-pointer off the Penn State freshman record, but the sophomore guard had more to say about the players who are poised to fill the void Bolton left.

For Jones, his role will be dictated on how consistent he can be with his jump shot.

The same can be said for Wheeler, who provided a somewhat surprising offensive spark toward the end of last season to complement his always active defending.

“I think pace of play and tempo was dictated by him,” Chambers said. “I thought he was more confident at attacking the basket… Opportunities count, and I thought is leadership was great, and he is setting the table right now.”

Chambers added that in a scrimmage last weekend, Wheeler turned the ball over only once in 20 minutes. So long as he continues to develop his offensive game, his value and playing time in late-game situations will rise substantially.

Plus, the addition of a second Jones — Curtis Jones Jr., a grad transfer who played for both Indiana and Oklahoma State — will be a source of experience for his young teammates.

“I can’t tell you what he’s taught me so far, but it’s very good stuff,” Dread said with a laugh. “He’s got a lot of veteran tricks, experience that I obviously don’t have.”

Izaiah Brockington will also enter the rotation after sitting out last season due to NCAA rules when he transferred from St. Bonaventure to Penn State.

While he may serve more as a wing option than a true two-guard, his 3-point shooting should aid the backcourt, as he shot 41 percent from 3-point range in his one season with the Bonnies.

The bottom line is this: Penn State doesn’t have a Carr-like player — and it probably be a long time until we see another player like him.

But Chambers has the luxury of backcourt depth which he hasn’t enjoyed in some time, and it should be enough to allow Penn State to forget about Bolton and, more importantly, avoid a calamitous stretch like the one which derailed the 2018-19 season.