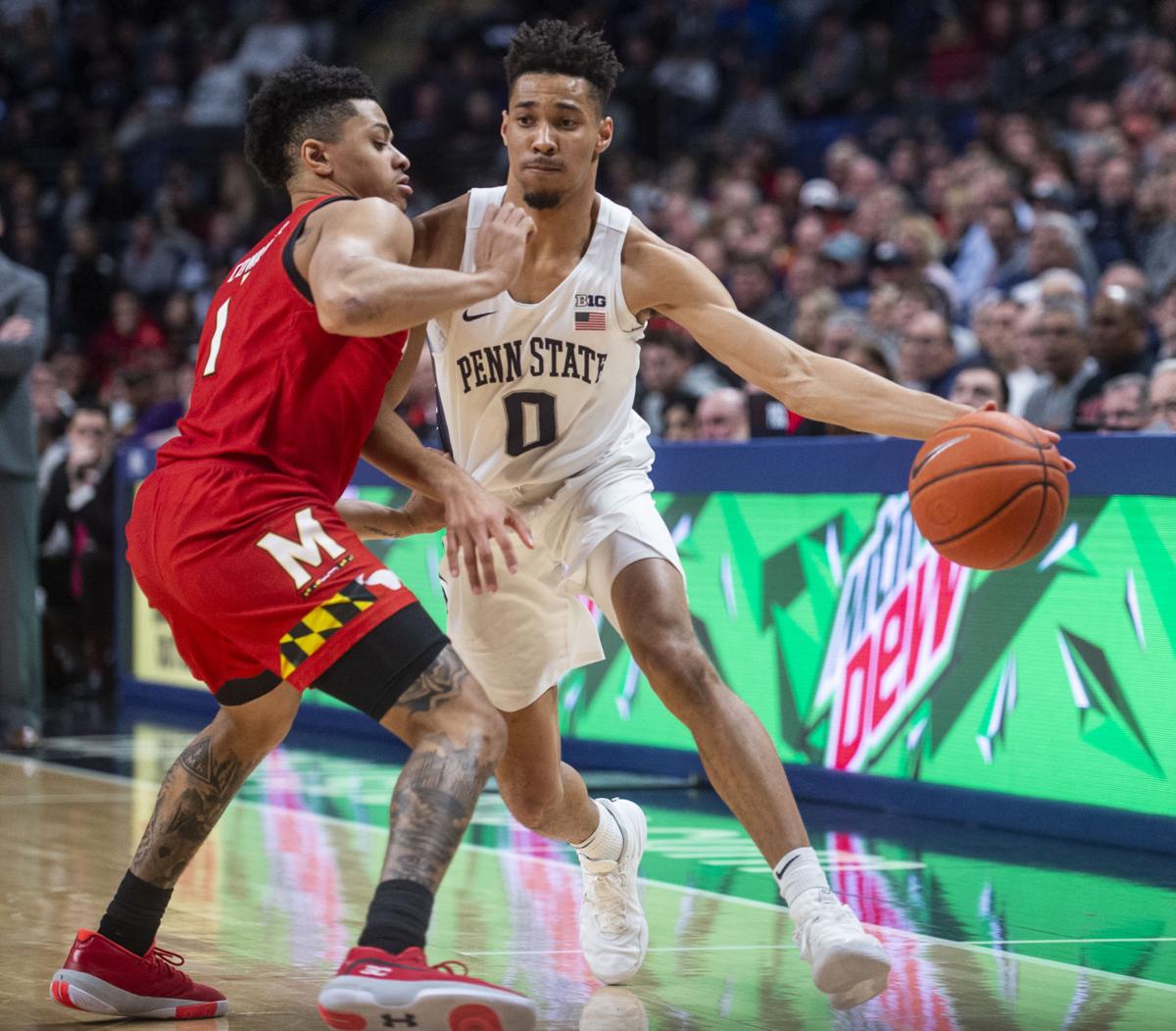 Guard Myreon Jones (0) drives towards the basket during the men’s basketball game against Maryland at the Bryce Jordan Center on Tuesday, Dec. 10, 2019. Penn State defeated No. 4 Maryland 76-69. 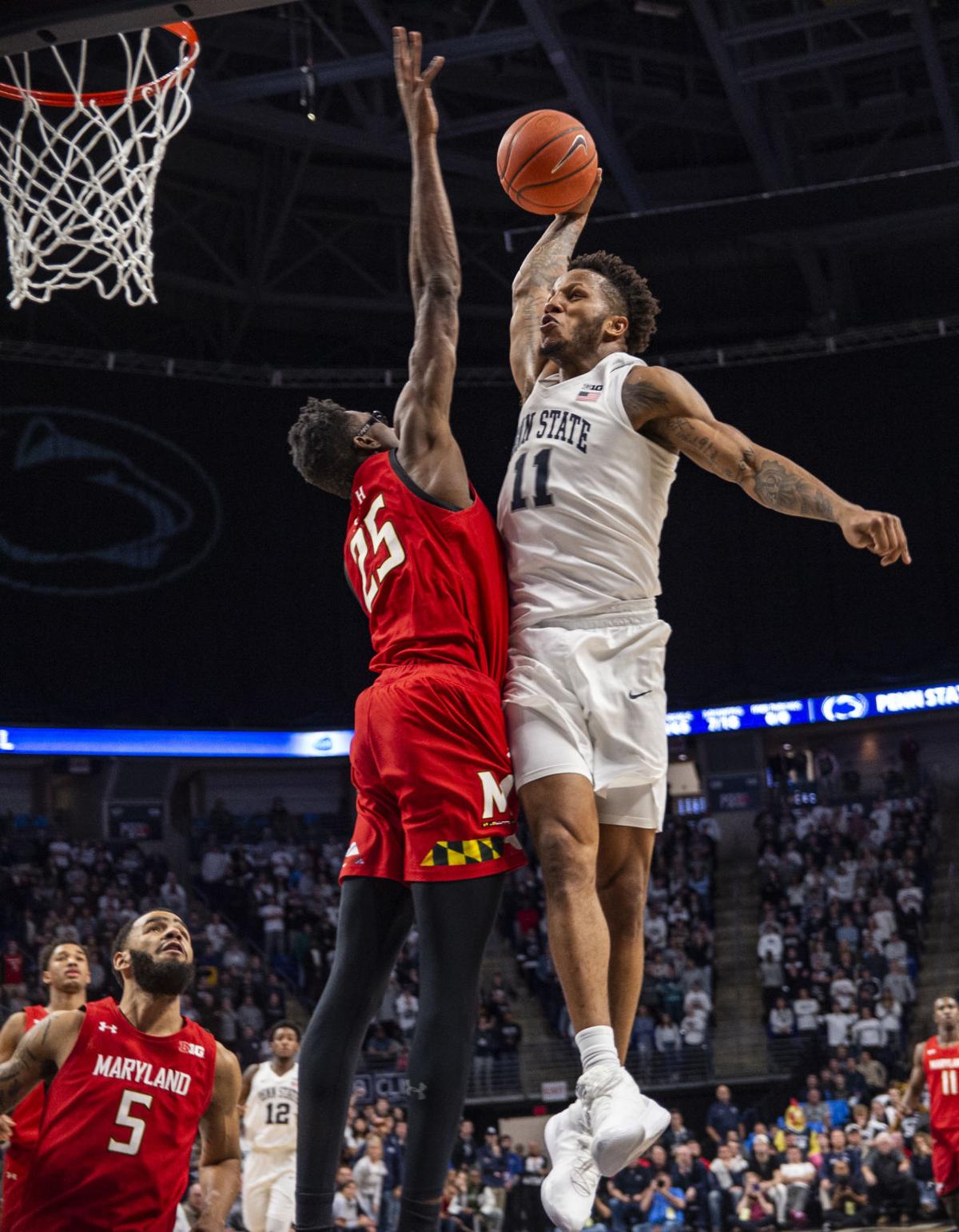 Forward Lamar Stevens (11) stretches to reach the basket during the men’s basketball game against Maryland at the Bryce Jordan Center on Tuesday, Dec. 10, 2019. Penn State defeated No. 4 Maryland 76-69.

After a brief stint of Big Ten play, Penn State resumes its nonconference schedule with a matchup from the SEC.

Coming off its biggest win of the season against No. 4 ranked Maryland on Tuesday, the Nittany Lions will look to claim their second consecutive win when they host Alabama on Saturday at the Bryce Jordan Center.

The Crimson Tide is 4-4 on the season, most recently beating a Stephen F. Austin team that upset Duke earlier in year.

Kira Lewis Jr. and John Petty Jr. make up the majority of Alabama’s scoring with 18.6 and 15 points per game respectively.

Petty Jr. is a sharpshooter who hits 3s at a high clip as he has shot 44 percent from beyond the arc this season. The Crimson Tide has shot the 3-ball slightly better than the Nittany Lions this season at 35 percent.

Alabama has consistently played a nine-man rotation throughout the year with a guard-heavy lineup most of the time. Freshman Jaden Shackleford adds depth to the strong backcourt and has put up nearly 12 points per game.

Turnovers have been a major issue for the Crimson Tide this season and have been a big reason the team sits at just .500 through eight games.

With 147 turnovers compared to just 112 assists as a team, Alabama’s assist to turnover ratio is not pretty. Comparatively Penn State has taken good care of the ball since some ugly early season showings and currently has 26 more assists than turnovers.

KenPom ranked the Nittany Lions at No. 23 after its upset win over Maryland while the Crimson Tide sit at the No. 84 ranking, which doesn’t crack the top-10 among SEC teams.

Alabama came away victorious in last year’s matchup between these two teams, beating Penn State by a score of 73-64 in Tuscaloosa.

In that game the Nittany Lions’ two most reliable scorers this season were nowhere to be found. Lamar Stevens and Alabama-native Myreon Jones combined for just 9-of-35 shooting from the field and 0-for-10 from deep.

Petty Jr. was the Crimson Tide’s second-leading scorer in that contest with 13 points while Trent Buttrick, who hasn’t cracked the rotation over the past few games has led Penn State in scoring with 13 points on a perfect 5-for-5 shooting night.

The game tips off at 2 p.m. on Saturday and will be broadcast on the Big Ten Network.