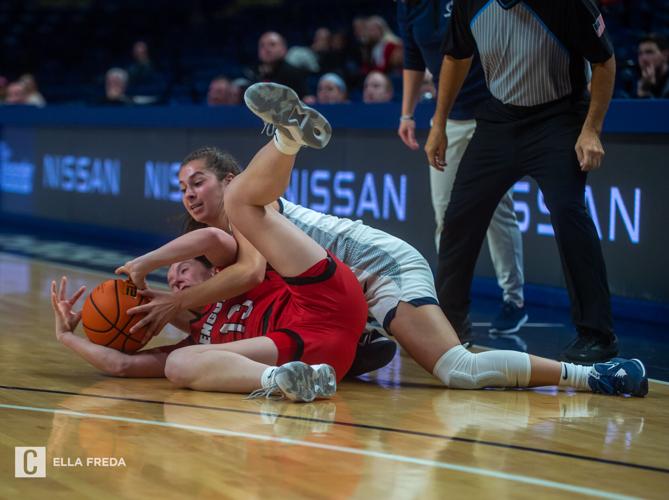 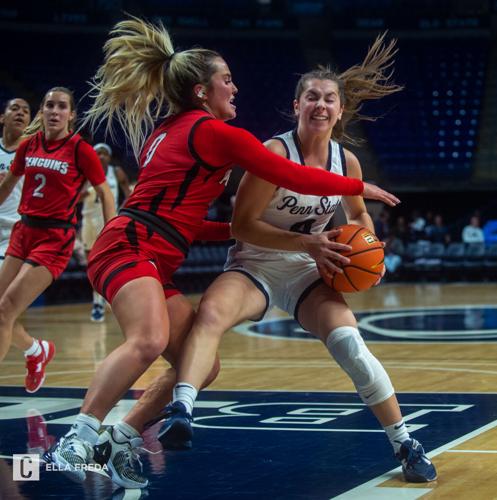 Penn State’s success in recent years has come largely on the back of successful and efficient guard play.

Even this year, players like senior Makenna Marisa and redshirt sophomore Leilani Kapinus have been two of the key components for the blue and white’s backcourt.

However, a new addition to the starting lineup has provided a much-needed spark for the Nittany Lions on both sides of the ball.

Freshman guard Shay Ciezki has started the last two games for Penn State after coming off the bench in her first career collegiate game, and she is already making a massive impact for coach Carolyn Kieger’s team.

After a poor shooting performance in her first start last Friday, Ciezki scored a career-high 16 points in 27 minutes of action, to go along with five rebounds and three assists, in Tuesday’s victory over Youngstown State.

With each passing game Ciezki seems to become more comfortable on the court for the Nittany Lions because she knows what’s expected of her.

“I think it started in the summer, coach Kieger told me that she wanted a floor general to command and direct,” Ciezki said. “I’ve been working on that every day, so to see that keep growing is pretty cool, and I’m going to continue to work on it.”

While Ciezki has begun to take on the role of floor general, her efforts in the starting five have allowed others around to expand their games.

One of the beneficiaries of the lineup change is Marisa, who is seemingly keeping on pace with her first-team All Big Ten efforts from last season.

Marisa scored 21 points Tuesday and is currently averaging just under 20 on the young season.

Playing in a three-guard lineup along with the likes of Ciezki and Kapinus, Marisa has been able to be more loose and free-flowing within the offense.

In her second career start, Ciezki credited Marisa as being a huge help for her as she begins to navigate college hoops.

“I think playing with Makenna has helped my game immensely,” Ciezki said. “She’s been showing me things in practice that I never thought a point guard could do.

“[Marisa] playing off the ball has really helped her a lot getting good, clean looks. She’s been an absolutely amazing player to play with.”

The Nittany Lions will have two more games at home before traveling to Florida for the Daytona Beach Invitational.

Finally playing away from home could provide an interesting challenge for Ciezki and the rest of the blue and white. For the youngster, though, the pressure is nothing new.

From the moment she arrived on campus, Kieger and the rest of the coaching staff have been “really hard” on her and pushing her to reach her maximum potential.

Through two games in the starting lineup, Ciezki’s impact has been immediate and a sign of what is to come for the rest of the season.

It’s rare to see a freshman bump an upperclassmen out of the starting lineup, but that was the case over the past two games for the Nittany Lions.

However, senior guard Taniya Thompson coming off the bench has provided a necessary spark for the second unit and allowed Ciezki to hone her craft as the team’s floor general.

Thompson started the season opener for the blue and white before moving to a more reduced bench role against Fairfield and Youngstown State.

Kieger felt Ciezki was ready for the moment, having seen her work ethic throughout the summer and preseason.

“She’s been a sponge. We’ve been really hard on her since the moment she got on campus because we knew we were going to utilize her,” Kieger said. “She wants to be great, and she wants to do whatever it takes for Penn State to win, so credit goes to her for her film sessions, individual workouts and everything she wants to do to get this team back in the tournament.”

Despite a 14-point win, it's back to the drawing board for Penn State.

Penn State was locked in and ready to go from the jump on Friday night.