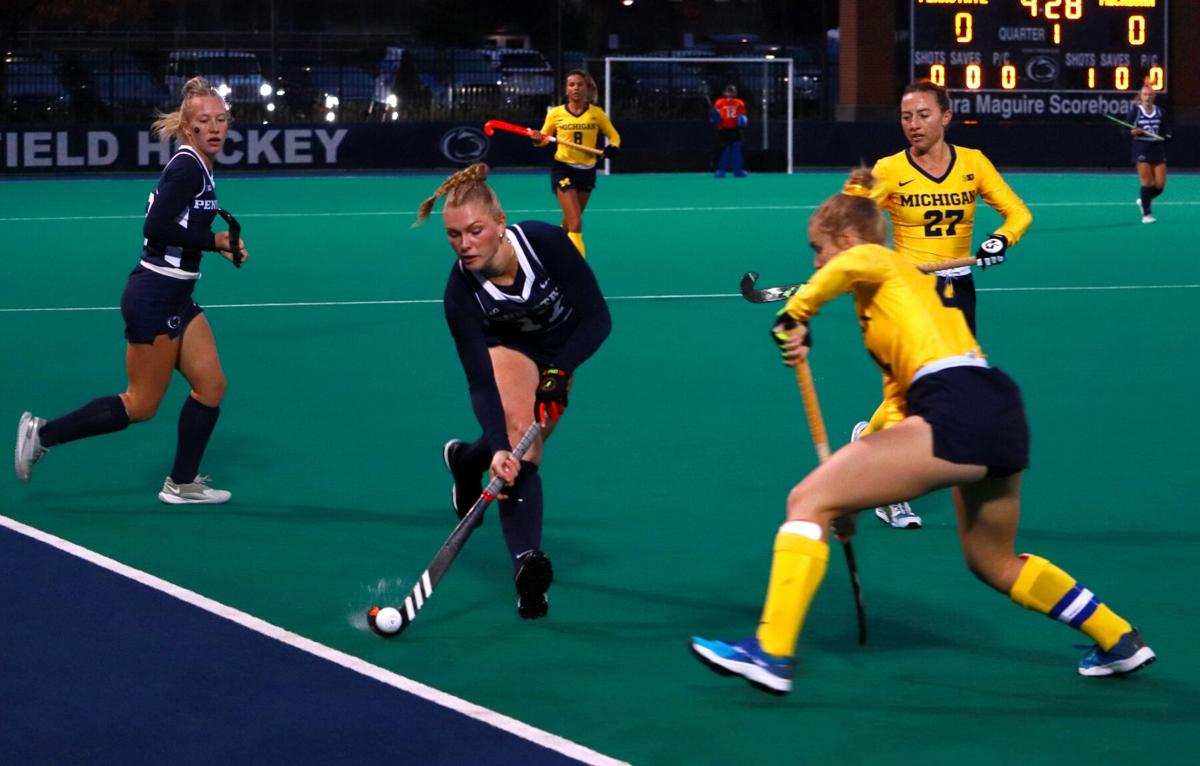 Defender Anna Simon (17) is contested by Michigan midfielder Halle O'Neill (22) for control of the ball just before Simon passes the ball to her teammates during the Penn State Women's Field Hockey vs. Michigan match on Friday, Oct. 29, 2021, at the Penn State Field Hockey complex in University Park, Pa. Penn State won 3-2 in overtime against the visiting team. 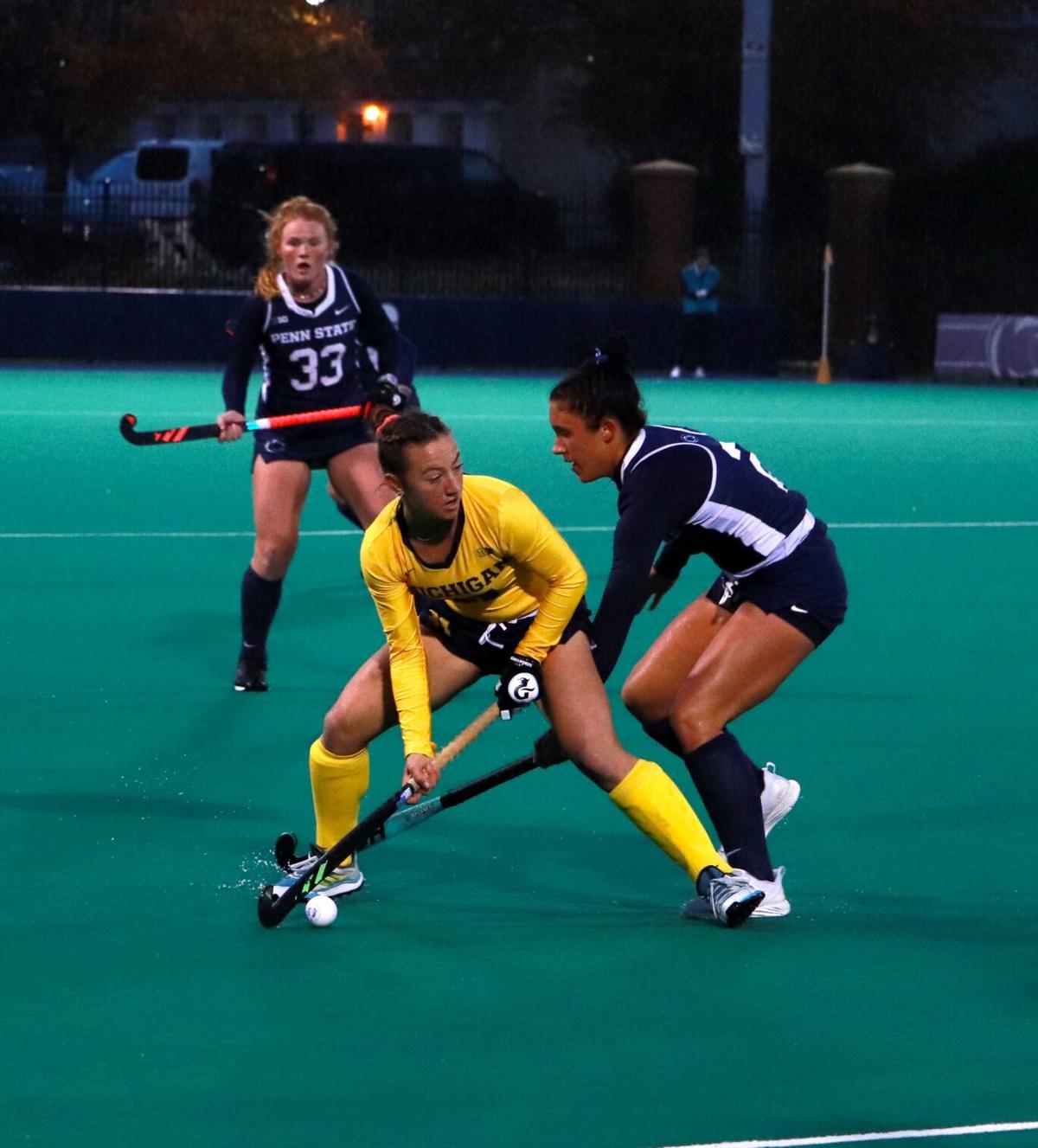 After one final practice on its home turf, Penn State will head to Piscataway, New Jersey, to begin its quest for a Big Ten Tournament title.

The Nittany Lions will rely on their team improvement throughout the season as they take on Maryland in the quarterfinal round of the tournament.

The last time the blue and white played the Terrapins was at the beginning of the season.

After going into overtime, Penn State took the game from Maryland 3-2 thanks to a goal from sophomore forward Sophia Gladieux assisted by senior midfielder Anna Simon.

A lot has changed since that game, including the Nittany Lions’ formation that has proven to be more effective, as well as the overall talent and spirit of the team.

“We feel good about the way we evolved as a team by using our backs and doing a little more attacking on the sidelines and getting our midfielders into play in the attacking zones as well,” coach Char Morett-Curtiss said.

The blue and white plans to utilize everything it has learned throughout the season as it heads into the game against the Terrapins, in hopes of avoiding another overtime matchup.

Penn State does have a good track record when it comes to overtime games, though, winning three out of four times in the regular season when the game couldn’t be decided in regulation.

Morett-Curtiss pointed out that an 80-minute game isn’t unlikely in a competitive conference like the Big Ten, especially against a team as skilled as Maryland.

The Nittany Lions do have many things going in their favor for this battle, other than their high skill level.

Penn State has been known this season for its team comradery not only on the field, but off the field as well.

Morett-Curtiss has explained the connectedness of her team all season and how its energy has reflected its success.

Other than their energy, the Nittany Lions could look to their last game against Michigan to build confidence and give them some momentum heading into the quarterfinals.

The Nittany Lions played the Wolverinces for the final game of the regular season and beat them in a thrilling 3-2 overtime affair.

After reflecting on the Michigan game, Morett-Curtiss noticed some similarities between the Wolverines and the Terrapins.

“[Maryland’s] midfield is a lot like Michigan’s where they do a lot of interchanging, and they maintain possession out of the backfield,” Morett-Curtiss said.

Noticing a lot of positive things about the Terrapins, Morett-Curtiss also noted their overall talent, as well as their speed.

En route to its 13-4 season, and the third-overall seed in the Big Ten Tournament, Penn State has had a consistent mindset throughout the campaign — take it one game at a time.

It is this mentality, and the idea of winning and learning moments, that has led the Nittany Lions to such success this season.

They use the learning moments to reflect and see what changes need to be made, and even for games that they win, the Nittany Lions know they can always get better in some aspect.

As the blue and white gets excited about the game against Maryland, it shows pride for the rest of the conference as well.

“We’re just excited about, not just our team, but the success of the Big Ten conference,” Morett-Curtiss said.

Considering six out of nine Big Ten teams make up the top-10 field hockey teams in the country, according to the NFHCA Coaches Poll, this tournament makes for good postseason practice according to Morett-Curtiss.

Going into this high-level tournament, Morett-Curtiss feels confident about where her team is both on a skill and mental level.

“We’re definitely prepared for this, it’s going to be a different look from us,” Morett-Curtiss said. “You know you’re going to see a lot of great hockey this weekend.”

With Penn State sitting at No. 7, and five other teams ranked in the top 10 of the NFHCA Coa…