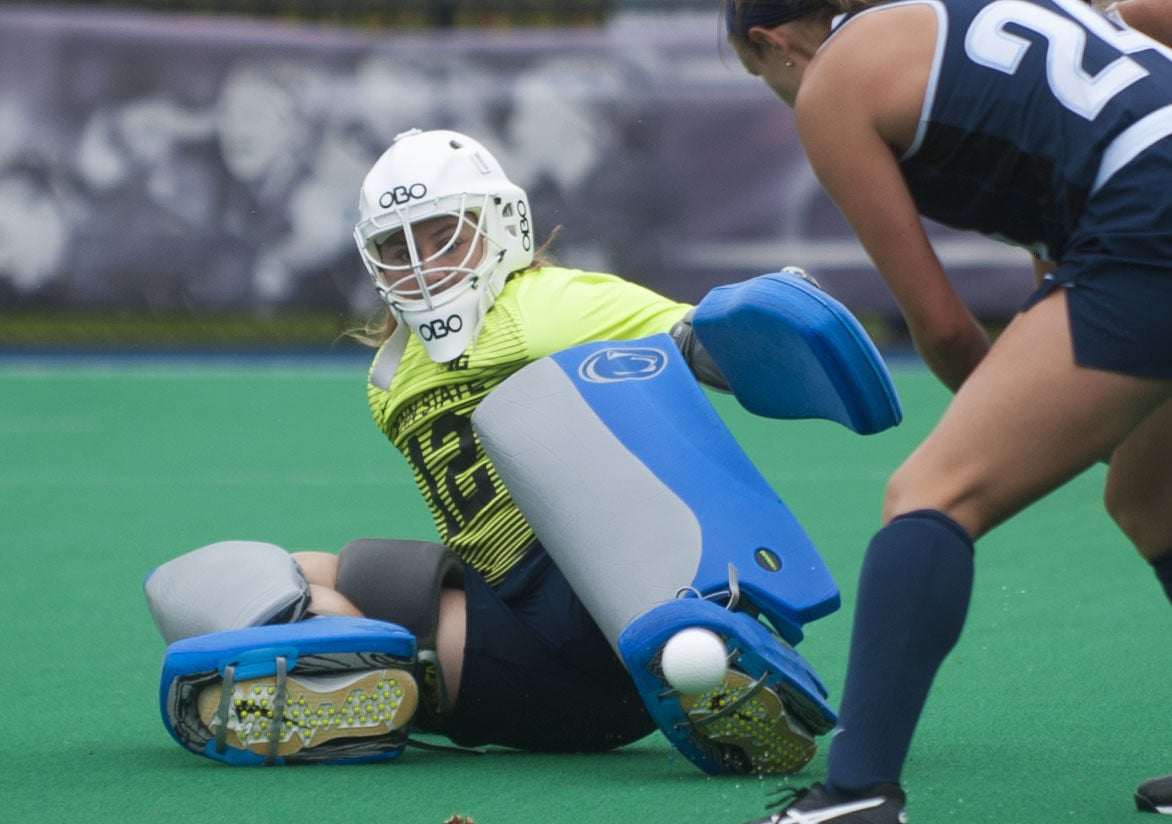 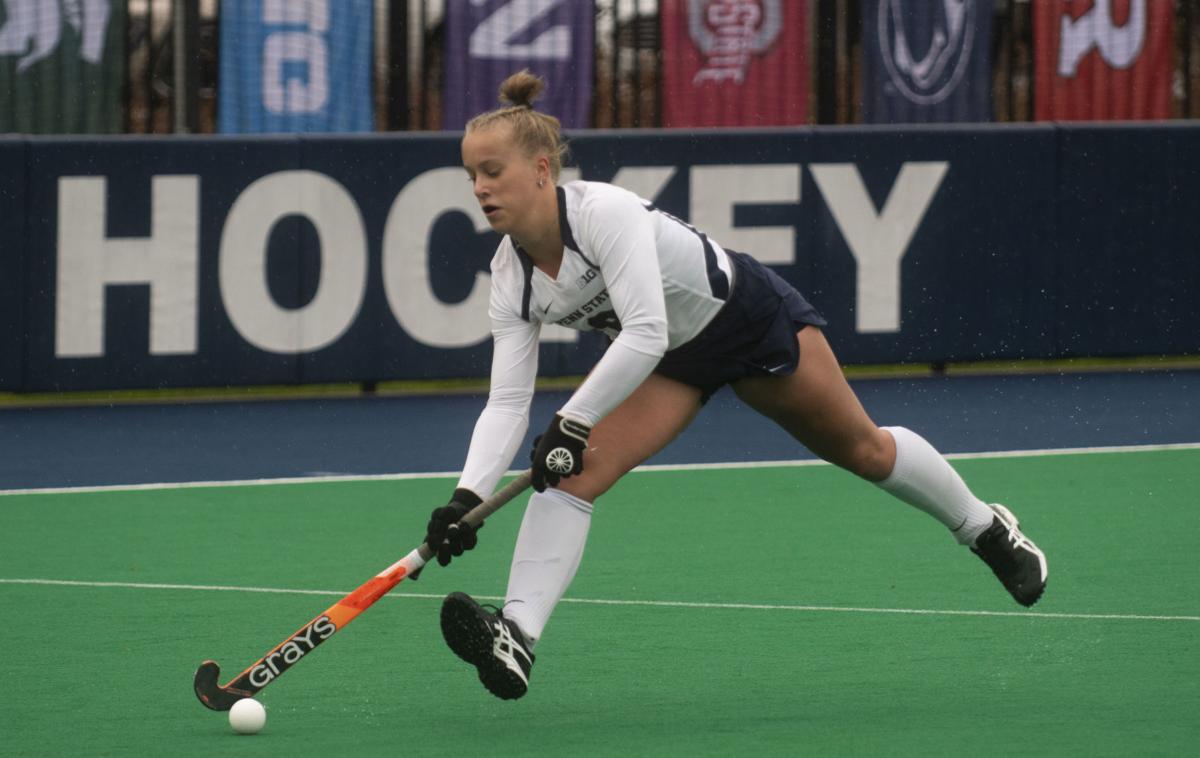 Midfielder Elena Vos (8) runs with the ball during the game against Michigan at the Penn State Field Hockey Complex on Thursday, Nov. 7, 2019. Penn State defeated Michigan 2-1.

Penn State held its composure on Sunday against Delaware’s stout defense while being backed by junior goalie Brie Barraco tallying six saves in the cage for the blue and white.

Moving the ball from end line to end line, the blue and white opened the field to create scoring opportunities which ultimately led to the 3-0 shutout.

The Blue Hens had effective coverage, but the Nittany Lions’ speed was unmatched by its opposition.

“I think that composure was something that helped us out, and we just kept the ball moving and working off of each other,” senior midfielder Anna Simon said. “Overall we had good ball speed and it definitely paid off.”

Simon initiated the ball movement that opened the scoring for Penn State following a corner. The midfielder received the ball at the top of the circle and smacked a straight shot right into the goal cage.

The “work horses”, as coach Char Morett-Curtiss calls her offense, were fast and aggressive. The attackers put 21 shots on the Delaware goalie along with six corners and a penalty stroke.

The penalty stroke was taken by junior midfielder Mackenzie Allessie who sent a hard shot into the bottom left corner out of the Blue Hen goalie’s reach.

Delaware on the other hand, got off 11 shots and four corners. All of the shots were shut down by Barraco with the rest of her defenders clearing the ball out of the circle.

“Brie Barraco making that crazy-great stick save just makes a difference against a team that moves like Delaware,” Morett-Curtis said.

The attitude of Penn State, despite moving to 5-0 on the season, is that it can always improve.

Simon noticed that in the first half the blue and white seemed to be playing towards the ball instead of opening up space and connecting with its teammates. Ultimately, ball-oriented movement closed off scoring opportunities for the homeside.

Delaware intercepted many of the Nittany Lions passes and applied strong pressure on the circle, causing the blue and white to miss crucial crosses.

“We had several chances in the first half, but we were throwing the ball away once we got to the circle,” Morett-Curtis said.

There were several instances where Penn State would receive the ball on its offensive endline, but when the angled pass was made, there was no one there.

The Blue Hens were able to move the ball multiple times in the middle of the field simply by picking off passes from the Nittany Lions.

Delaware was also playing effective coverage and would come in sets of two or three in order to throw off the blue and white’s momentum.

Morett-Curtis said she would like to see more build up in the midfield in order to connect speedy forwards with turnovers earned by the backfield. The Nittany Lions struggled to capitalize on counterattacks on the day.

However, the half-time locker room discussion led by Morett-Curtiss proved to be effective considering the blue and white’s success in the second half.

Penn State made the necessary adjustments to beat Delaware’s defense by working around it as opposed to playing into it.

Seven of the Nittany Lions’ 21 shots came from sophomore forward Sophia Gladieux, who only managed to convert one goal against Delaware.

It was Simon who got the ball from a Delaware player and made a backhanded pass to Gladieux in the circle.

The sophomore forward got around a couple defenders, placed the ball on her left side and took a hard reverse shot that was too fast to be stopped.

After taking the victory on Sunday, Penn State will have several points of emphasis to work on before its Big Ten opener against Maryland on Sept. 18.

“We can do a better job at putting the ball into space. Sometimes, we didn’t really connect and find our teammates, but I think we got better in the second half,” Simon said.

No matter how the game goes, one thing that Penn State always counts on is its proven team chemistry.

“I think this team really has each other’s back when they are on the field,” Morett-Curtis said. “They can really cover for each other.”

Penn State moves to 5-0 on the season after downing Delaware in Sunday’s matchup 3-0.

Penn State’s defense brought it on Sunday and did not allow Delaware to score a single goal in the game.