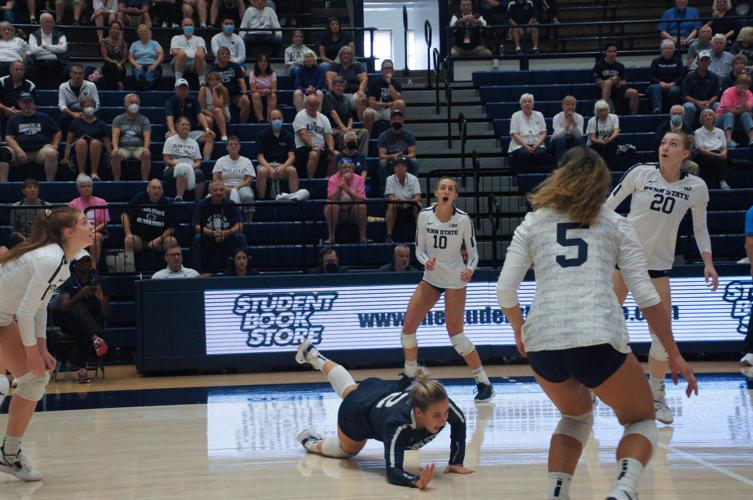 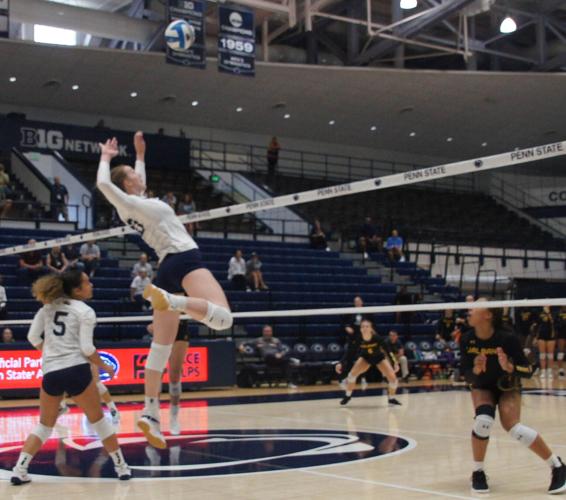 Outside hitter Anastasiya Kudryashova (18) prepares to spke the ball during the Penn State women's volleyball game against UAlbany on Saturday, Sep. 17, 2022 at Rec Hall in University Park, Pa. The Nittany Lions defeated the Great Danes 3-0.

Penn State has a new stain on its perfect 12-0 record, and Michigan was the one to spill the drink Saturday at Rec Hall.

The blue and white lost its first game of the season in a 3-0 sweep, putting together its worst offensive performance of the season and dropping three places in the national ranking as a result.

“I think it was an eye-opener for the girls, you know, not that they were comfortable winning, but I think just to acknowledge that the Big Ten is so competitive,” coach Katie Schumacher-Cawley said. “Especially when you're at home, you got it, you have to be sharp, and you have to be ready to go right from the first whistle.”

Despite the defeat, Schumacher-Cawley saw the contest as an opportunity to learn and improve and said the team’s mentality is the same, win or lose.

The blue and white offense during the Michigan game was off as compared to previous games, registering a season-low .105 hitting percentage. Nevertheless, there were good plays that were overshadowed by the defeat.

“We did a couple things against Michigan in the beginning that were good,” Schumacher-Cawley said. “Then we kind of went away from it and, you know, lost a little bit of focus.”

Redshirt senior outside hitter Anastasiya Kudryashova, who considers herself very judgmental, wasn't happy with her overall performance or the match’s result in general.

The Russian has only appeared in seven of the team’s 13 matches thus far, but she sits seventh in total attacks on the squad after picking eight against the Wolverines.

“I didn't like the way I played so I don't think there were any positive moments,” Kudryashova said. “I think the [points] that I scored were like on accident.”

The Nittany Lion added the match against the blue and maize showed her the areas she has to work on, and stated the team is not frustrated but rather inspired to do better.

While Penn State struggled in different areas of its lineup and didn't play up to its past performances, the power of Michigan’s team shouldn’t be overlooked.

The Wolverines posted five aces against the Nittany Lions, but that wasn't the only damage of the night, as the team’s defense racked up 52 digs and 20 blocks against the blue and white.

“They played really hard and they did some great things. They served really aggressive. I don't think we've seen serving as aggressive as that up until this point,” Schumacher-Cawley said. “I think they had a great game plan and, you know, we didn't respond too well to some things, and I think it's a learning experience.”

Following this game, the Nittany Lions went back to practice with desire to improve and understand what areas of their play need to be sharpened.

Schumacher-Cawley said that thanks to the help of film work, the players were able to find details that needed to be fixed and things that could have played out better on the court.

Coach Schumacher-Cawley said for the following games she wants to see her outside hitters find different ways to score, hit different shots and move the ball around more.

“We had a great practice yesterday and they're eager to get going,” Schumacher-Cawley said. “They've acknowledged what they need to work on, and so for me that's good.”

In such a tough conference, with a myriad of new faces in the building, losses were likely to come for the blue and white at some point. At the end of the day, it’s all about how it responds to those defeats, especially the first one after such a hot start to the year.

The Nittany Lions face No. 8 Wisconsin on Friday with their sights set on bouncing back.

“We're like more mad that we didn't have a chance to overturn this game, so — we like — we're more oriented towards the next game,” Kudryashova said. “I think that we're actually going to perform really well.”

Penn State women's volleyball gets taste of own medicine, struggles to keep up with Michigan offense

The Nittany Lions dropped their winning streak, failing to use a packed Rec Hall to their ad…

No. 12 Penn State women’s volleyball gets swept by No. 8 Wisconsin for 2nd straight loss

After last week's upset loss at Michigan, Penn State took the road Friday night in hopes of recovering its momentum and clinching its second B…

Milena Velez Melendez is a sports staff reporter for The Daily Collegian. She is a sophomore majoring in digital and print journalism.

In their last episode of the semester, the “Wrap Around Podcast” co-hosts Nick Stonesifer and Braden Dyreson head to the streets of downtown State College in a quest to interview their fellow Collegian staffers.