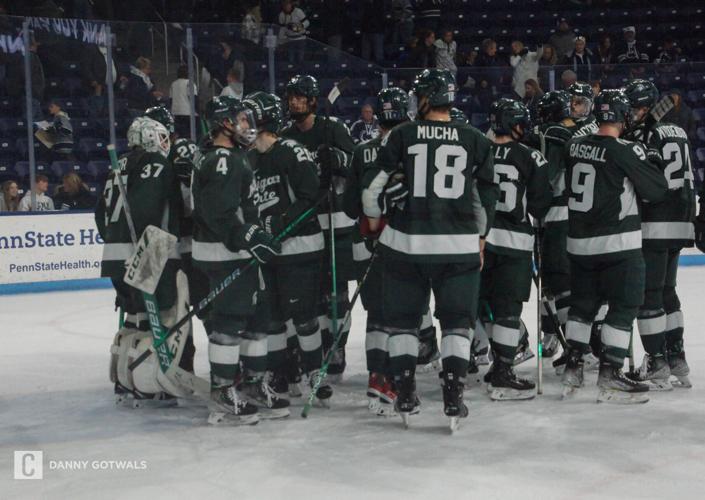 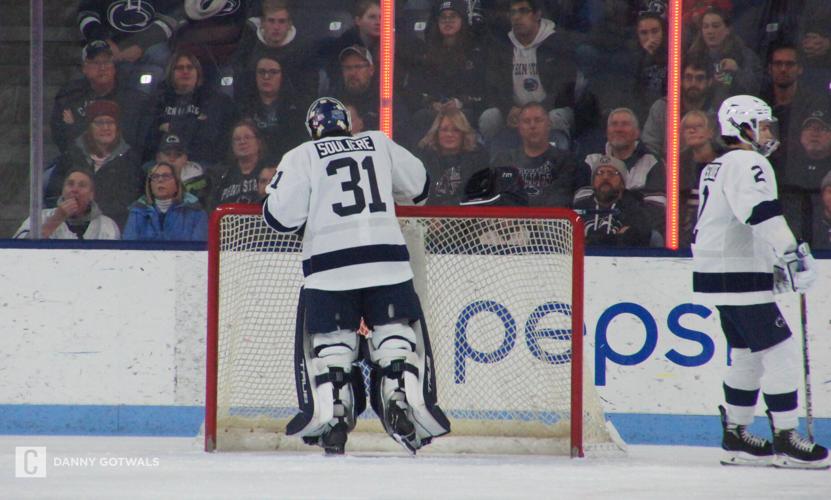 On a night where Penn State allowed its most goals all season, Guy Gadowsky couldn’t pinpoint exactly what went wrong for it and hoped his team could rebound with a quick turnaround.

Michigan State scored seven goals on two different blue and white netminders in Saturday’s barnburner but Gadowsky said he isn’t blaming either for the loss.

“I’m not blaming the goalies at all,” Gadowsky said. “It’s hard to stop what you don’t see.”

The tenured coach isn’t placing the blame on his defenseman either, as he credited the Spartans aggressive style of play on offense for 60 minutes as the difference maker.

What is to blame for the gashing defeat is Michigan State’s capability to string together a trio of goals in back-to-back periods.

Michigan State’s ability to create traffic in front of the net caused a headache for the blue and white skaters all night. A line of defenders in the vision of Souliere masked the netminders’ skill in goal.

Junior goaltender Liam Souliere started the night in between the pipes for the Nittany Lions but was quickly relieved by freshman Noah Grannan after allowing three goals on just six shots.

In rapid succession, the Spartans tacked on those three tallies in under 10 minutes of play against the struggling Souliere.

“We were dull, we were off, we were not competing,” Gadowsky said. “The change in [Souliere] was very much designed for the team effect, not on him.”

After allowing three goals to start the game, Penn State roared back to tie the game heading into the second period, but the storyline remained the same for the Spartans.

For a second consecutive frame, Michigan State piled on three straight goals to take a commanding three-score lead over the Nittany Lions, never looking back.

Gadowsky credited the Spartans' attack and ability to forecheck Penn State’s defenseman as a big reason for its third loss of the year.

“This was our biggest loss of the year, so it’s really tough to speak positively about anything,” Gadowsky said. “When you lose 7-3 it’s hard to take a lot of positives.”

Despite its worst performance all season, Gadowsky wasn’t worried about his team’s mentality on a short week and credited the culture laid out in the summer as the foundation for its ability to bounce back.

Penn State has shown its skill at rebounding from difficult situations in the midst of a losing effort already this season, and the 11th-year coach isn’t worried that things will go south.

Although there is plenty of work to be done before welcoming Alaska Fairbanks to Happy Valley, the biggest message to the blue and white is culture.

The culture of success doesn’t stop when adversity hits, it only begins.

Gadowsky was eager to go and watch the postgame film to see what exactly went wrong Saturday night and was sure the same mistakes plaguing Penn State won’t be a recurring theme.

For now, Penn State can learn a lesson or two from the team’s most recent defeat, but the memory of the loss to the Spartans can’t diminish the end goal in sight.

The Nittany Lions will have just two days to prepare for their next opponent, as they’ll host Alaska Fairbanks at Pegula Ice Arena on Tuesday and Wednesday.

“Every season you’re gonna have peaks and valleys — every one” Gadowsky said. “It’s not a matter if you don’t, it’s a matter of what you do with them.”

It was a barnburner in Happy Valley, but not to Penn State’s liking.

The sky isn't falling, but Penn State's ranking is.

Jim Hartnett is a men's hockey reporter for The Daily Collegian. He is a senior majoring in digital and print journalism with a minor in sports studies.