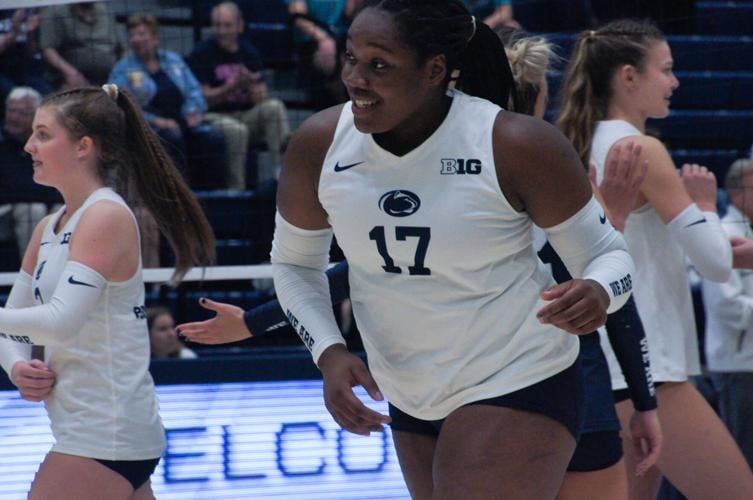 Outside hitter Zoe Weatherington (17) celebrates after a point during the Penn State women's volleyball game against Coastal Carolina on Saturday, Sep. 17, 2022 at Rec Hall in University Park, Pa. The Nittany Lions defeated the Chanticleers 3-0. 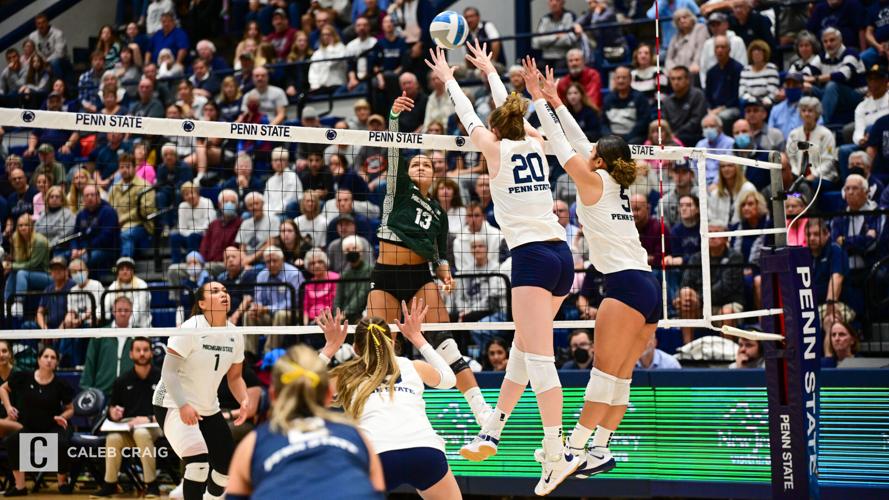 Coming off of a double-victory week, No. 16 Penn State found its rhythm away from Happy Valley.

With six conference games remaining, the Nittany Lions enter another back-to-back Big Ten clash, facing Indiana and No. 15 Purdue on the road.

Back to last week’s contest, the blue and white took down Maryland 3-1 at Rec Hall, then dominantly swept Rutgers, seizing consecutive conference wins.

“The positive is winning two matches because I think that's hard to do in this league,” coach Katie Schumacher-Cawley said.

For the third time this season, graduate student Seleisa Elisaia was named the Big Ten Setter of the Week. Elisaia praised the team’s effort to build strong connections with her hitters, establishing confidence and riding momentum toward success.

“It's awesome honestly, like I wouldn't have been here without the girls,” Elisaia said. “We've worked pretty hard, developing those relationships by hitters, and so they're always communicating what they need for me, and I'm also, like, being pretty responsive to that as far as within.”

Senior outside hitter Zoe Weatherington and junior middle blocker Allie Holland have been salient on the offense, with each tallying 25 kills for the week.

In their matchup on Sept. 23, Penn State swept Indiana in a 3-0 dominant victory, extending its winning streak to 19 against the Hoosiers, while remaining undefeated.

Around a month and a half later, the current season is nearing its end. The Nittany Lions have tasted the flavor of losing, combating adversity, and they’re looking to extend their winning streak to finish strong.

Meanwhile, the Hoosiers carry a 6-7 record after the first date between both teams, including a three-game losing streak against three ranked opponents on the road. Now back to Bloomington, Indiana, the Hoosiers will try to upset No. 16 Penn State by doing whatever they can.

Led by sophomore setter Camryn Haworth, the Hoosiers lead the conference in serving with 179 aces. However, the blue and white did a brilliant job of containing Indiana’s serving power, allowing only three aces in the first matchup. Penn State will need to reproduce this performance to secure the win.

Indiana’s offense has been shipwrecked recently against ranked opponents, including games with .155 and .057 hitting percentages. Penn State should take advantage of the struggling Hoosiers’ offense.

Similar to the Nittany Lions, Purdue’s conference journey is a bumpy ride with ups and downs.

After a four-game losing streak, the Boilermakers shifted their momentum and won the last three games. With an 18-6 overall record, they sit fifth in the Big Ten, a spot ahead of No. 16 Penn State.

Although Penn State leads the all-time series 39-4, Purdue has won three of the last five matchups against it. The contest will be a pivotal clash for both teams, considering their standing in the conference.

On offense, the Boilermakers have one of the most dangerous weapons in the conference after the emergence of freshman outside hitter Eva Hudson. Hudson, a former three-time Summit Athletic Conference MVP, leads the team with 398 kills and ranks second in the Big Ten in the stat.

Hudson will provide significant firepower to this Purdue offense. However, it could be lethal for Penn State to ignore other athletes. Another player the squad will have to be aware of is sophomore middle blocker Raven Colvin, who tallied 199 kills with a .319 hitting percentage.

Colvin also is resilient in the Boilermakers’ defense. The former Big Ten All-Freshman team member leads the squad with 119 blocks and 32 service aces.

The pillar of the defense will be senior defensive specialist ​​Maddie Schermerhorn, who has a team-high 352 digs and leads the conference with an average of 4.51 digs per set.

Penn State will look to push a late-season run by extending its winning streak and beating its first ranked Big Ten opponent this year.

“I think this is one of the biggest weekends for us within the conference,” Schumacher-Cawley said. “You know, they have to be able to come focused and ready to go.”

Another week, another series against the top-ranked team in the nation for Penn State after …