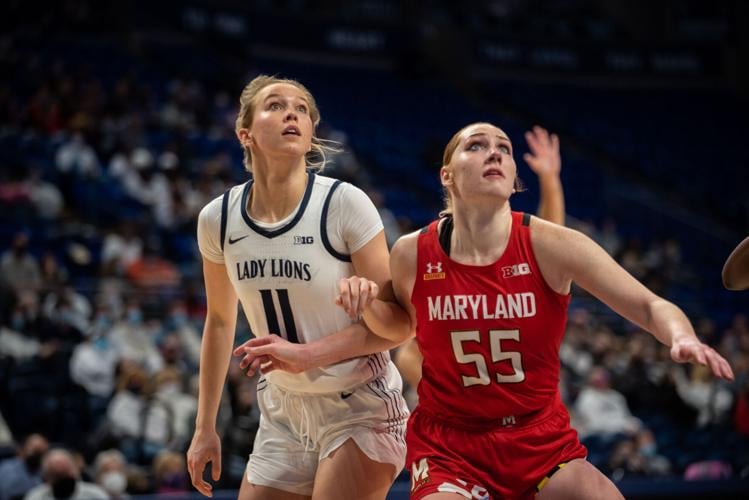 Penn State forward Anna Camden (11) looks to grab a rebound during their game against Maryland on Sunday, Jan. 30, 2022 at the Bryce Jordan Center in University Park, Pa. The Nittany Lions were defeated 82-71. 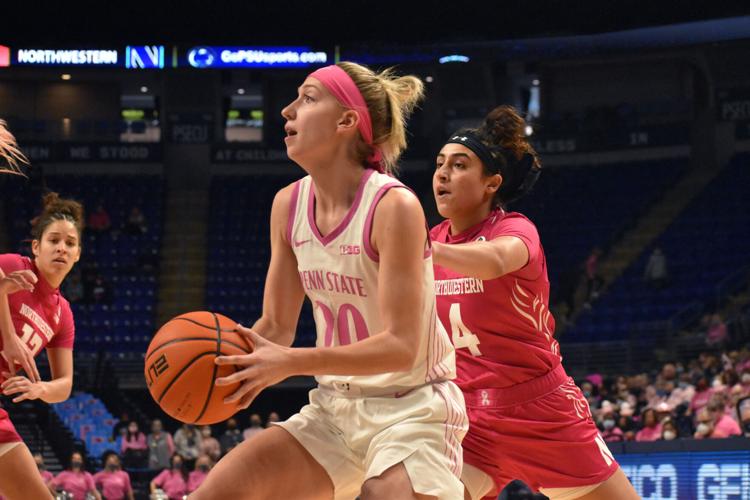 Guard Makenna Marisa (20) looks for a time to shoot during the Lady Lions basketball game against Northwestern at the Bryce Jordan Center on Sunday, Feb. 6, 2022 in University Park, Pa.

In what was an overall disappointing year, Penn State still had positive moments throughout its season.

But in a year full of ups and downs, coach Carolyn Kieger is still looking for a breakout season at the helm.

In her third season with the blue and white, Kieger led her team to an 11-18 overall record and a 5-13 record in Big Ten play.

Penn State’s season came to a quick end in the Big Ten Tournament when it was defeated 75-50 by Rutgers in the first round.

Here’s a look back at this past season for the Lady Lions squad by the numbers.

One of the blue and white’s biggest downfalls in 2021-22 was its rebounding.

The Lady Lions finished with a -6.8 rebounding difference, which was poor enough to place last in the Big Ten.

For a team that finished in the bottom half of the conference in field goal percentage, good rebounding is essential to keep possessions alive on offense and limit the other teams to one-and-done opportunities on defense.

Guard Leilani Kapinus was the only player on the team to average more than five rebounds a game, coming in at 5.7 a contest.

Fixing these poor rebounding numbers should be priority No. 1 this offseason if Penn State hopes to improve next year.

Who knows where the Lady Lions team would have finished without leading scorer Makenna Marisa.

Marisa averaged a whopping 22.2 points a game, 12.6 points better than her closest teammate, Kapinus. Her 22.2 average placed her second in the entire Big Ten, behind only Iowa phenom Caitlin Clark.

Although she had multiple games with over 30 points, that's not all she provided for the team, as she averaged 4.2 rebounds and 4.2 assists per game as well.

As the team’s only double-digit scorer, the standout guard was and will continue to be the focal point of the blue and white’s offense.

However, Penn State will need other scorers to step up if it wants to put up enough points to consistently win games.

The Lady Lion defense left much to be desired last season.

After giving up 74.9 points per game last season, the worst mark in the Big Ten, Penn State will also have to play better defensively if it wants a shot at a winning season.

Kieger’s squad gave up 93-plus points in four different games, a mark it only hit once all year in a nonconference matchup with Delaware State — when it put up a shocking 120 points and won by 69.

Allowing opponents to make 43.3% of their field goals and disappearing on the boards proved to be a recipe for disaster.

Although the Lady Lions mostly failed in the defensive department, one area they excelled in was blocked shots.

The Lady Lions averaged 4.41 blocked shots per game in 2021-22, good for second in the conference.

The three main contributors to this high total were Kapinus, Ali Brigham and Anna Camden, who tallied 33, 30 and 28 blocks, respectively.

The most impressive performance of the season came on March 21 at Michigan State, when then-junior forward Anna Camden accrued seven blocks in one game.

In the three seasons since Kieger took over the reins in State College, the team's winning percentage has increased every year.

While the blue and white’s .379 mark from last year doesn’t seem impressive on the surface, it does show some promise.

After taking over a struggling program that used to be among the best in the country, Kieger is making strides toward returning to prominence, but there is still a long road ahead.

During a two-game stretch in mid-February, the team showed a flash of its potential, beating two teams that finished at or above .500, Nebraska and Michigan State, in consecutive games.

Editor's note: A previous version of this article included Tova Sabel and Maddie Burke, and …

Well-rounded Penn State women’s track and field shines in 2022, appears primed to break out next year

Track and field may be a team sport, but it was the extra efforts of several individuals that propelled Penn State to a quality season.

Can we expect Penn State to be in this year’s Rose Bowl? | The 1-0 Podcast

Penn State’s regular season has officially come to a close, and there’s plenty of updates in the college football realm.