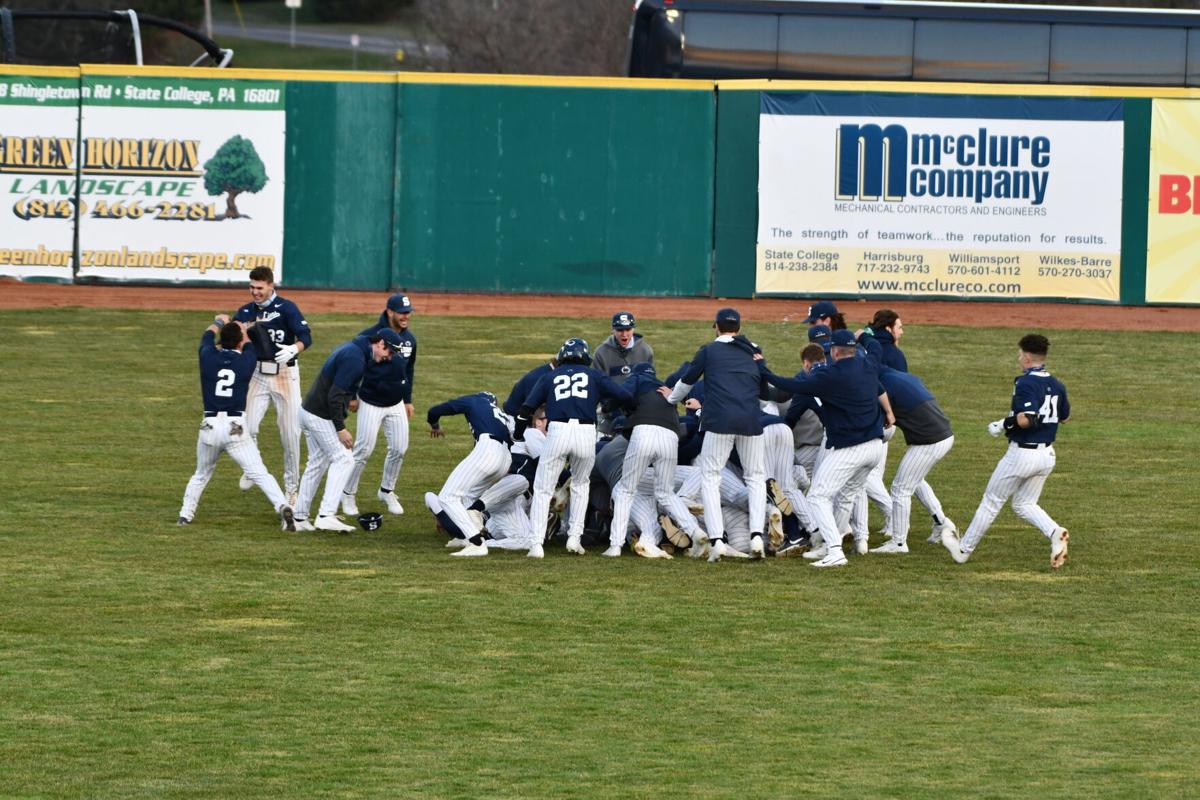 The Penn State baseball team celebrates after a win in the game against Michigan on Friday, March 26, 2021, at Medlar Field at Lubrano Park in University Park, Pa. The Nittany Lions beat the Wolverines 3-2. 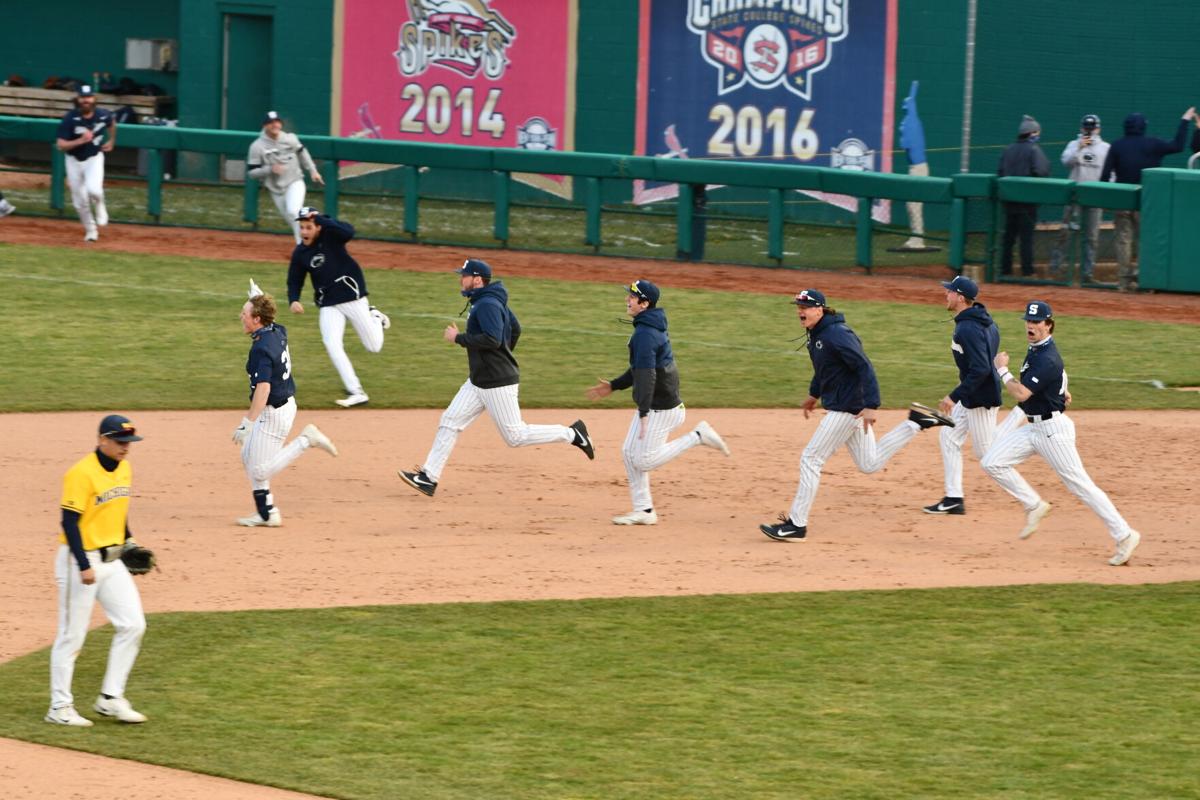 Players from the Penn State baseball team celebrate running out into the field in the game against Michigan on Friday, March 26, 2021, at Medlar Field at Lubrano Park in University Park, Pa. The Nittany Lions beat the Wolverines 3-2. 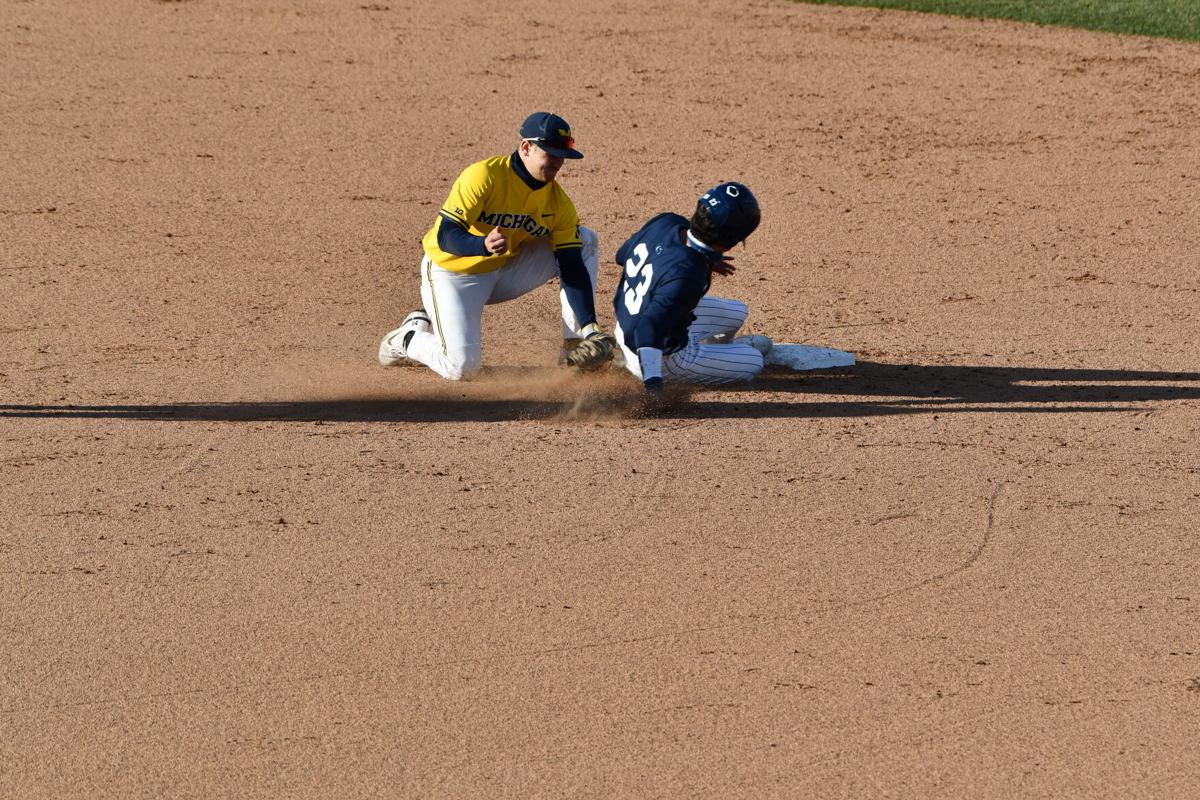 Outfielder Kris Kremer (23) tagged out at second by Michigan's Riley Bertram in the game against Michigan on Friday, March 26, 2021 at Medlar Field at Lubrano Park in University Park, Pa. The Nittany Lions beat the Wolverines 3-2.

Penn State sits at 4-10 four weeks into the season, good for the third-worst record in the Big Ten.

But the record doesn’t tell the entire story.

Coach Rob Cooper’s squad split its season-opening series against Northwestern, was swept in four games against Indiana and dropped two of three to Maryland.

The Nittany Lions were at a crossroads after the Maryland series. They endured a game in which they fell way behind early, battled back to tie the game, and ultimately collapsed late to get blown out 19-10.

Then, they won a tight game in walk-off fashion, only to be blown out once again the next day.

Maryland sits just one spot above Penn State in the Big Ten standings, which seemed to indicate the season was about to go off the rails for the blue and white — especially heading into a series against a top-25 Michigan team.

However, Cooper’s squad shocked the college baseball world by pulling off an extra-inning, walk-off upset of the Wolverines in the series opener. Game 2 saw the Nittany Lions lead through four innings before an epic collapse en route to a 17-4 defeat.

The rubber match saw the blue and white lead all the way through the ninth inning before the game was tied and eventually lost in extra innings. In total, Cooper’s squad led or was tied with the then-No. 19 Wolverines for 20 of the 29 innings the teams squared off in.

It was a complete turnaround from the team that took the field in the prior three weeks of the year, but proved the inconsistent yet close-to-success nature of the 2021 Nittany Lions.

After the blowout loss to Maryland in the series opener, Cooper said he thought his offense’s performance has been like “Jekyll and Hyde” thus far, but that the team was “extremely close” to being good.

His team is generally inexperienced, and its veteran leaders have not been as consistent as necessary to carry a young roster through the difficult stretches of an all-conference schedule.

Junior ace Bailey Dees has shown exactly why he starts on Fridays at times, including a shutdown outing in the win against Michigan, but had also had a pair of performances against Indiana and Maryland that raised some questions about his effectiveness.

The other two juniors in the rotation have been a part of the same story. Conor Larkin has been the best pitcher on staff thus far, but he gave up six runs in just 4 ⅓ innings to Michigan.

Kyle Virbitsky starred against Indiana, but had a very poor performance against Northwestern.

The fourth starter in the rotation is true freshman Jaden Henline, who has been solid in his two starts, but he has had growing pains that are to be expected from a first-year player.

Cooper’s bullpen has seen meaningful innings from only three relievers that have more than sophomore-level experience: Tyler Shingledecker, Mason Mellott and Jared Freilich. The trio’s combined ERA sits at 8.56.

Mellott and Shingledecker were lights-out in Game 1’s win against Michigan, but Shingledecker only recorded one out in a brief Game 2 appearance. Mellott nearly shut it down in Game 3, but the reliever fell victim to some untimely errors in the field that allowed the game to go to extras, where the Nittany Lions eventually lost.

On top of the inconsistency and youth on the pitching staff, Penn State has started seven different freshmen in the field at some point this season, and each of the team’s major batting statistics are led by one of those freshmen.

The youth has shown in the “Jekyll and Hyde” offense as well as in the team’s 21 errors so far. For comparison, opposing teams have committed just 10 against the Nittany Lions.

It’s unsurprising Cooper’s team has gotten off to a rocky start. It hasn’t had any nonconference games, which often act as a bit of a warmup, and there’s more young players on the field than a lot of people may have expected.

The veterans on the team have been who they needed to be at times, but have also been the exact opposite on numerous occasions.

The Michigan series showed signs of life for the Nittany Lions’ chances to turn their season around. The team has a few games under its belt and the young guns have had time to acclimate to Big Ten baseball, which culminated in an altogether solid performance against the conference’s best.

Bullpen struggles the kryptonite for Penn State baseball in series loss to No. 19 Michigan

With one out and no base runners, Penn State’s Mason Mellott was rolling in the ninth inning…

Max Ralph is a baseball reporter for The Daily Collegian. He is a freshman studying journalism.