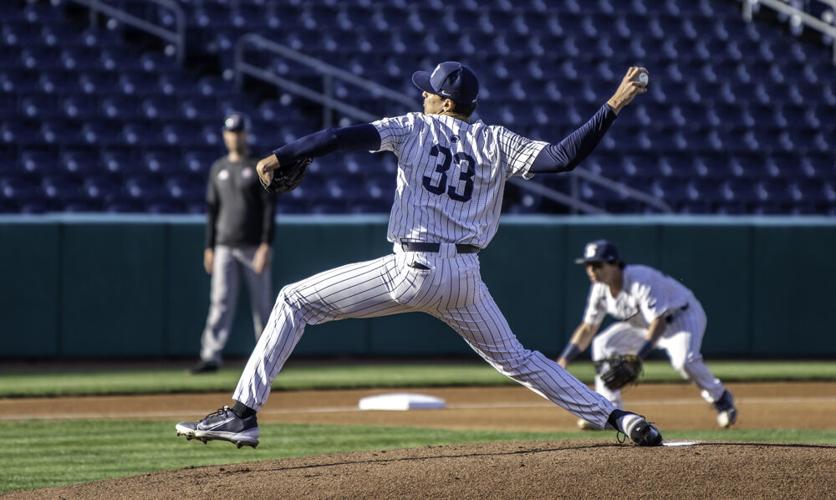 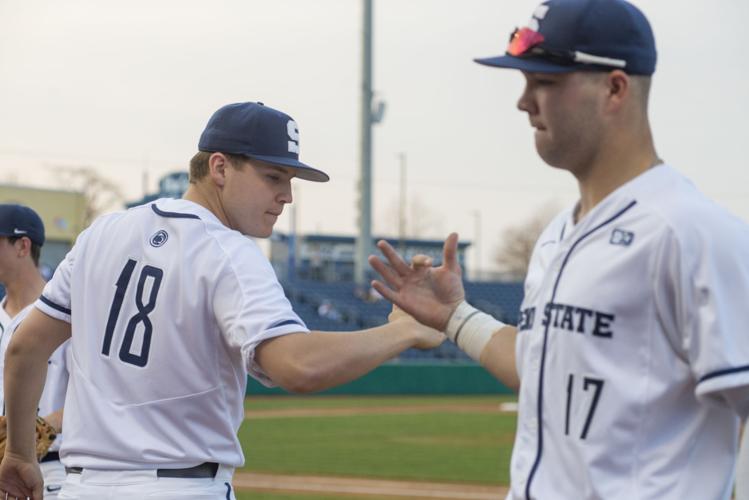 Penn State's Mason Mellott (18) claps hands with Curtis Robison (17) during the game against Ohio State in the Medlar Field on Friday, April 13, 2018. The Buckeyes defeated the Nittany Lions 1-0.

Penn State will look to win its fourth straight conference series when it takes a trip out west to take on Ohio State.

While neither team was great to start the year, both are riding hot streaks entering the final stretch of the season.

Something will have to give, as the two squads are on a collision course and set to clash in Columbus.

The Nittany Lions are playing some of their best ball of the season, entering the series having won eight of their last 10 contests.

The Buckeyes are also turning things around, winning four of their last five games after losing eight of their previous 10.

Both teams are currently battling for a spot in the Big Ten Tournament, which would require a top-eight finish in the conference standings.

Holding a record of 10-8 in Big Ten play, Penn State currently sits inside the bubble, tied with Michigan for the fifth spot. The Buckeyes, on the other hand, rank 12th, with a conference record of 6-13.

With just six conference games remaining, including a season-ending series with fourth-ranked Illinois, every game matters for the Nittany Lions.

The matchup with the Buckeyes provides a good opportunity for Penn State to pick up some wins and climb the ladder, assuming it can take care of business.

Offensively the Buckeyes have been solid, ranking fifth in the conference in batting average and sixth in slugging percentage this year.

Senior Marcus Ernst leads his team in batting average, hitting .362 from the leadoff spot, though he isn’t the best Buckeye at getting on base.

That title belongs to freshman outfielder Trey Lipsey, who boasts the highest on-base percentage among qualified batters, due in part to his team-leading 15 hit-by-pitches this season.

When it comes to the long ball, no Buckeye has hit more than senior Zach Dezenzo, who has gone deep 13 times in the 2022 campaign.

The scarlet and gray has been able to get on base, but its biggest weakness has been a lack of speed on the bases.

In 42 attempts, the Buckeyes have converted just 25 for stolen bases, which puts them dead last in the Big Ten in steals.

On the other side of the ball, Ohio State has struggled on the bump, posting a team ERA of 6.52, which ranks second to last in the conference.

Penn State fans should expect to see some fireworks, as its conference rival has given up by far the most home runs of any team in the Big Ten and has also failed to register a single shutout all season.

Ohio State’s lowest ERA belongs to reliever Griffan Smith, who holds a mark of 3.09, but its three consistent starters, Wyatt Loncar, Isaiah Coupet and Nate Haberthier, all have ERAs over 5.00.

Coupet leads the team in strikeouts with 84, but also leads it in walks allowed with 33 on the year.

Defensively, expect a sloppy game, as the two teams rank at the bottom of the conference in fielding percentage. Ohio State is the worst of the two, with a mark that ranks 280th nationally.

To make matters worse, the Buckeyes have turned the fewest double plays in the Big Ten this year.

Poor pitching and fielding combined with strong offense should make for some high-scoring contests, something the Nittany Lions are accustomed to after their series with Michigan State.

The blue and white has a trip to Omaha, Nebraska, on the line, but the Buckeyes will look to play spoiler when the two teams collide Friday night.

Following a three-game sweep of Michigan State, Penn State had a quick turnaround with a roa…

After a road setback to Georgetown on Tuesday, Penn State had a chance to get right against Ohio State.

Joel Haas is a baseball reporter for The Daily Collegian. He is a sophomore majoring in journalism.