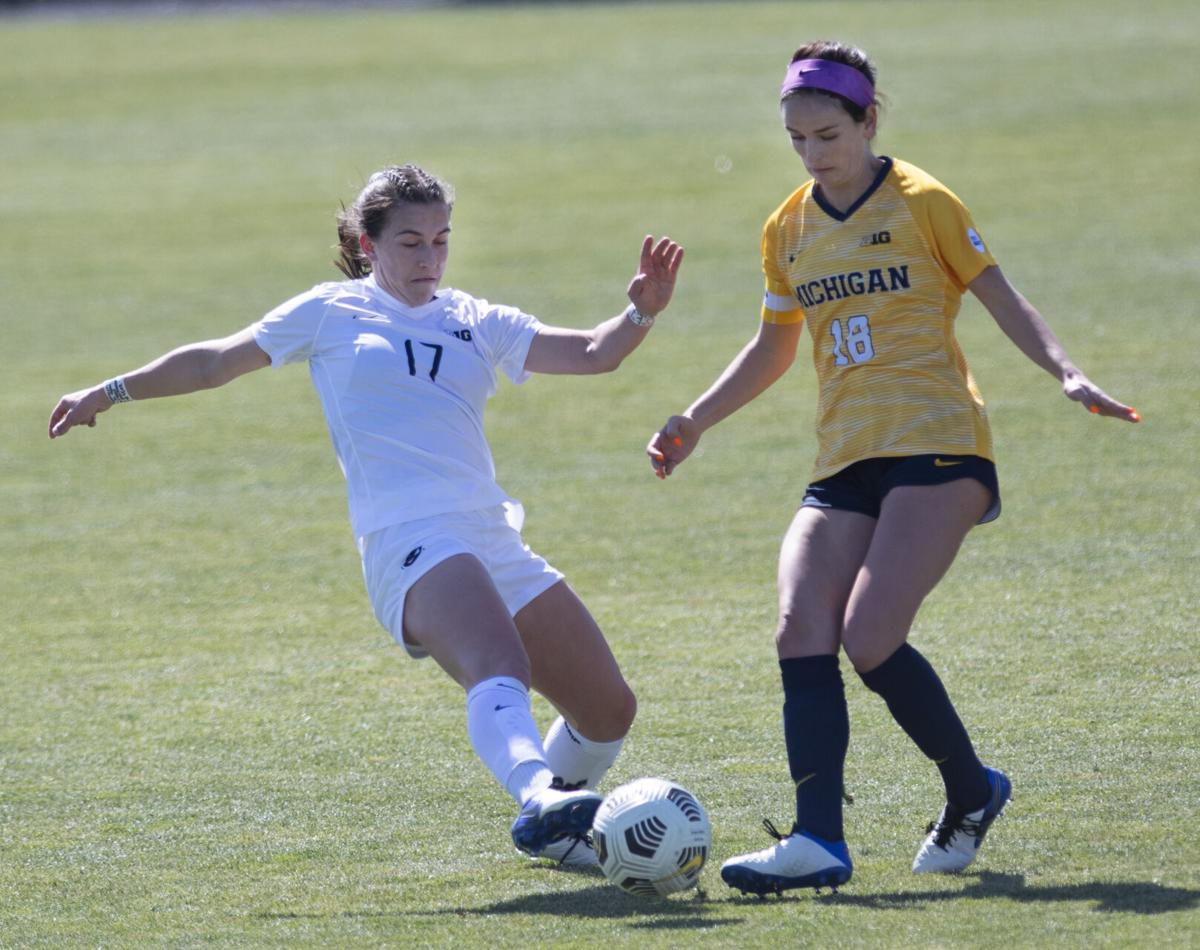 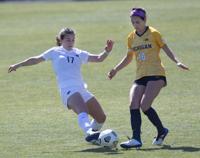 Penn State midfielder/forward, Sam Coffey (17), attempts to kick the ball away from Michigan's Raleigh Loughman during the Penn State women's soccer game against Michigan on Sunday, March 21, 2021, at Jeffrey Field in University Park, Pa. The Lady Lions beat the Wolverine's 4-1. 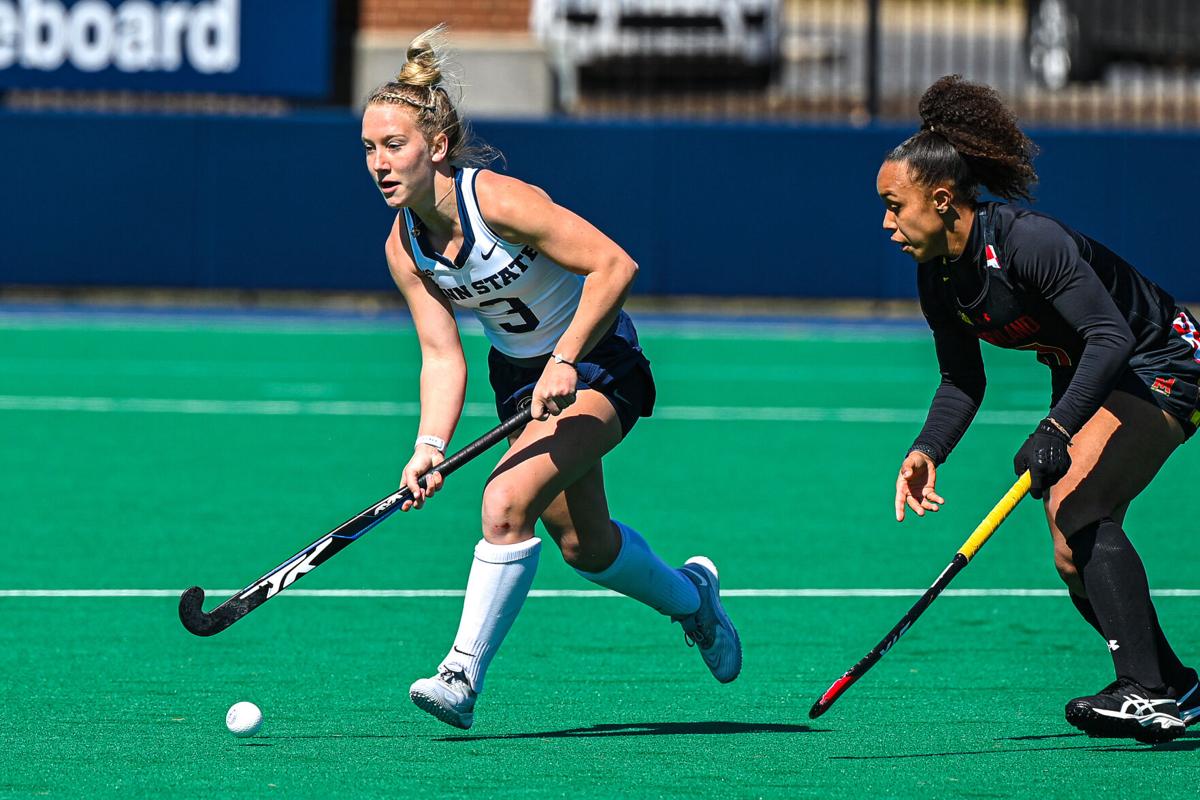 A pair of Nittany Lion soccer teams are set for their respective conference tournaments to begin, while squads like baseball and softball are in the midst of their regular seasons.

In anticipation of the second weekend of Penn State sports this April, here are five of the biggest storylines for the blue and white.

For Penn State men’s volleyball, few seasons have compared to the 2020-21 campaign.

The Nittany Lions currently hold a 17-3 record and were once riding an 11-match win streak. However, the blue and white dropped its most recent contest to George Mason in five sets.

Now, Penn State is tasked with a pair of matches against Charleston. The blue and white is sitting in first place in the EIVA, clear of NJIT by one place in the standings.

Considering the Nittany Lions topped the Highlanders in three of four matches this season, Penn State only needs to beat Charleston to secure the EIVA regular-season crown.

Penn State women’s soccer already wrapped up the Big Ten regular-season title, but now it has its eyes set on larger goals.

After a season-opening loss to Rutgers in February, the blue and white did not lose a game for the remainder of the regular season and finished with a 9-1-1 mark.

Penn State will face the winner of Indiana vs. Michigan in the second round of the tournament, having already beaten both teams in the regular season.

Should the blue and white keep up its momentum from a 6-0 win on Senior Day after winning each of its last five games, Penn State will be primed for a deep run in its conference tournament and perhaps, the NCAA Tournament as well.

When Rutgers defeated Penn State in the season opener in February, it was viewed as a major …

Penn State baseball will travel to East Lansing this weekend, but it won’t be facing just Michigan State.

The Nittany Lions will play four games this weekend, with the first two coming against the host Spartans. For the latter half, the blue and white will face Purdue, but the contests will still take place in central Michigan.

This is the first of three such split series Penn State will play this season.

The blue and white will host both Minnesota and Rutgers in mid-May and travel to West Lafayette, Indiana, for battles with the Boilermakers and Golden Gophers.

Penn State is fresh off its first series victory of the year after beating Rutgers in two of three games.

Field hockey attempting to get off the snide

After sweeping Michigan State on the road in its last series of March, Penn State was not so fortuitous against Rutgers. The Scarlet Knights held the Nittany Lions scoreless in Piscataway, New Jersey, defeating the blue and white 3-0 and 1-0.

Sitting below .500 with a 4-5 mark, the blue and white will look to right the ship in its first home games since March 14.

It will have a prime opportunity to do so as Penn State hosts an Indiana squad that is still searching for its first win of the season. Last weekend against Ohio State, the Hoosiers gave up a combined 11 goals in two meetings with the Buckeyes.

Penn State’s recently dormant offense will have a chance to reawaken against a porous Indiana defense as it looks to turn its season around in the penultimate series of the Big Ten regular season.

After a 6-1-1 record in the regular season, Penn State men’s soccer has earned the No. 2 seed in the Big Ten Tournament.

The Nittany Lions will square off against Ohio State in the quarterfinals. In the two teams’ regular-season encounter in late March, the blue and white secured a 1-0 victory behind a Peter Mangione goal and shutout by Kris Shakes.

Should Penn State beat Ohio State, it would need two more wins to secure coach Jeff Cook’s first Big Ten Tournament title. Otherwise, it will turn its attention to the NCAA Tournament the Nittany Lions would qualify for with an at-large bid.

Penn State men’s basketball is currently a program in limbo.