Sometimes you don’t realize how much a certain practice of your life affects you until you eliminate it altogether.

For me, this was the case with social media.

When I was given my first iPod Touch in middle school, I honestly didn’t even know what it was. I was just happy I could store all of my favorite Black Eyed Peas and Selena Gomez albums in one place.

When I discovered I could capture memories and connect with friends via apps such as Instagram, I was thrilled.

My relationship with social media began to evolve alongside a growing network of people.

What once served as a place to share stories and jokes soon transformed into a conduit for FOMO, and notifications became a way to quantify popularity.

I had always been a positive person in life, but watching other people post about their lives and vlog every waking day made me question my own positivity. Did these people ever feel sad? Or nervous? Or any human emotion aside from happiness?

I soon became overwhelmed with social media — feeling a need to constantly entertain hundreds of people and “prove” myself to them.

Over the years, I never wanted to limit my social media usage because it felt like the primary avenue of meeting new people and connecting — especially when starting college.

Social media has great uses such as the potential to collaborate and create, but it was so easy to become indulged in it.

The line between social media’s practical uses and consuming nature blurred for me.

In an attempt to understand and “recover” my own relationship with social media over the past few months, I muted or temporarily deleted some of the apps.

While I found myself feeling more productive and engaging in other activities I enjoy, I seemed to be out of the loop on what the world was discussing. My friends would begin to make jokes about a viral video, but I had no idea what they were talking about.

I would delete the apps only to redownload them again.

I was giving myself whiplash.

It was this process that made me discover that my brain was wired to open social media apps purely out of habit. It was no longer about sharing ideas or engaging in valuable conversations. I was merely curing boredom — scrolling.

Mundane moments such as standing in the elevator or sitting in a waiting room were always filled by swiping on social media because that was the “norm” — even if I had no clue what I was looking at on the screen in front of me.

After noticing this, I challenged myself to not pick up my phone in public settings. I stood in the elevator just observing my surroundings. I received weird looks.

In fact, I attended a lecture last week and was shocked at what I observed in the audience surrounding me.

The audience was excitedly cheering and clapping at the start of the event, but after about 15 minutes passed, many had their heads bent 90 degrees — scrolling on social media like limp puppets tied to strings.

I began recording my observations in a journal. Anytime I would go to open a social media app, I encouraged myself to pick up my journal instead — examining why I felt the need to impulsively check specific apps.

After analyzing my relationship with my phone and purely observing the world around me, I was able to discern how I wanted to approach the future of my social media usage.

I came to this conclusion: I want to hold aspects of my life closer to me, enjoy waking moments and put down my phone to enjoy the presence of others.

This doesn’t mean I want to delete social media and never look at it for the rest of my life.

But, I want to use social media to connect and collaborate — not to fill an obsession or lack thereof.

Social media offers great opportunities for networking, creativity and means to spread information. I believe it can be very valuable to our evolving society, when used in moderation. 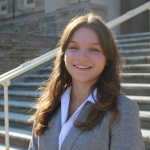 Olivia Woodring is a columnist and editorial cartoonist for The Daily Collegian. She is a sophomore majoring in public relations with a double minor in Spanish and digital media trends and analytics.