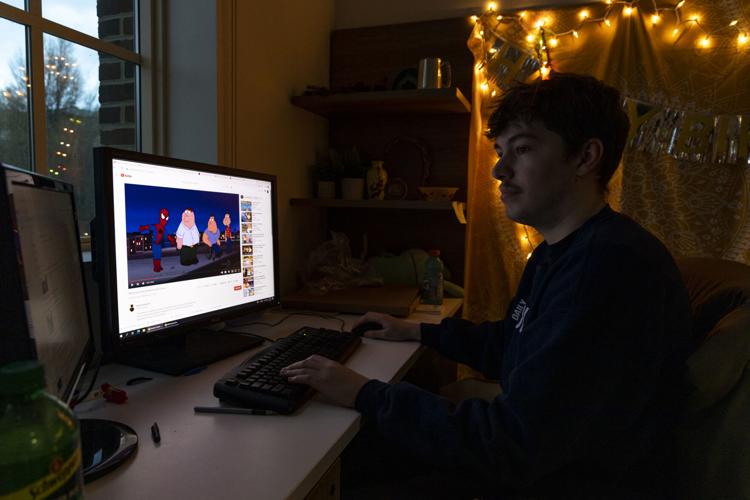 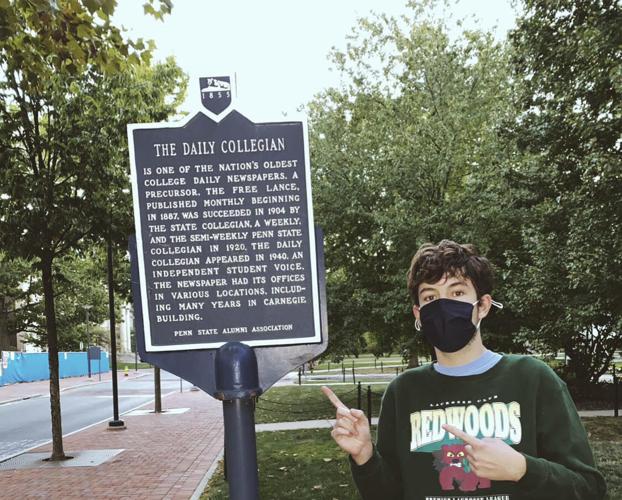 Porterfield points at some TDC signage on campus. This was really cool when he saw it for the first time. 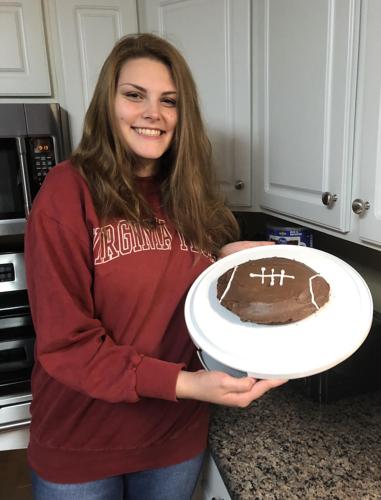 Porterfield's smokin' gf, Madylen, poses with a cake she made when he joined the Collegian's football staff in 2020. 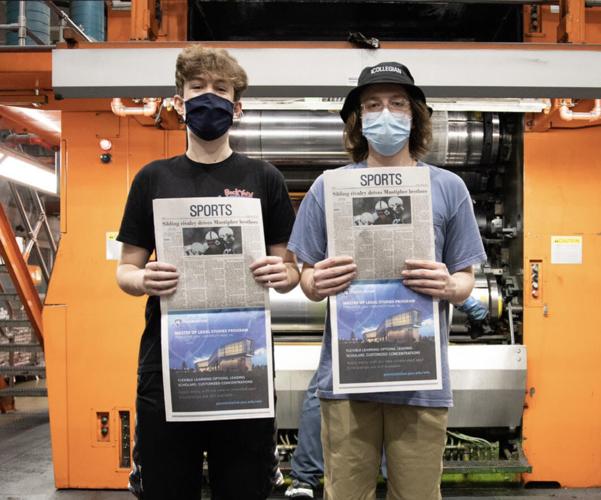 When I was a kid, I was an absolute monster at “Jeopardy!”

My mom and dad — really just mom — would get smoked on a daily basis by a kid who could barely tie his own shoes (it’s still a struggle) and had to take geometry twice because he just couldn’t figure out how to find the volume of a cylinder.

Now I’m a junior in college (Then why the hell are you writing a senior column, you idiot?) and have found my new “Jeopardy!” In true Alex Trebek fashion, cue the blue board:

“This independent student newspaper began publishing in 1887 on the campus of Penn State University, where it has cemented itself as an anchor in the community and the top student media outlet in the country.”

“What is The Daily Collegian?”

For the past year, I’ve been blessed with the opportunity to be the Collegian’s digital managing editor. It’s a position that has consistently given me the same adrenaline rush as answering a $2,000 question correctly along with that sweet, sweet repetition.

Doing the same tasks day in and day out is monotonous to some. But to me, routine is a sanctuary.

Waking up every day and frantically checking Twitter has certainly taken a few years off of my life. Scrolling through Facebook comments to see accounts with blank profile pictures trashing our work has probably shaved down my life expectancy, too.

Even still, I’ve learned that social media is my passion. Journalism isn’t what gets me out of bed anymore, and that’s more than OK. If it weren’t for Collegian Editor-in-Chief Jade Campos selecting me as DME, I would’ve stayed on a path that just didn’t bring me any fulfillment.

So my time is up at The Daily Collegian.

From the second I walked into the James Building as a summer-semester freshman, I knew the Collegian was home — more so than State College, more so than Penn State, more so than anywhere else I could’ve been as an undergraduate.

Three offices and a ton of friends later, the clock strikes midnight. I’m forever thankful for the memories gifted to me by this student newspaper.

I’m not going to single out any one memory or story I have of this place because none are more important than the other. Every second of every day for the past three years has shaped who I am as a student, and the Collegian accounts for 90% of that.

Goodbye, The Daily Collegian. It’s been fun, and don’t doubt that I’ll show up at the Willard office every once in a while to make sure things are running smoothly. It’s time to put on my “helicopter parent” hat.

To Madylen, you’re the reason I keep on keepin’ on. Hopefully one day I can pay you back for all of the times you’ve remotely bought me Noodles & Company. If there’s one person in this messed-up world I can count on 100% of the time, it’s you. <3

To Rufus, you don’t understand English except for your name and “treats,” so I won’t bore you.

To Madre and Pops, thanks for letting me go to Penn State while emptying your wallets in the process. Money isn’t everything, ya know? I’m lucky to have parents who stand by me even when I’m acting like I have no sense.

To Becky and Jade, I’m confident that we were the most successful Collegian Top 3 ever on the backs of our forefathers. There’s so much we’ve accomplished together, and all of those accolades will stick with me for life.

To Shane, I cannot believe you put up with me for a year and a half. You were my Mr. Miyagi from Day 1, but you’ve also been a great friend, too.

To Maddie and Lindsey, I probably wouldn’t have wanted a managing-editor spot if it weren’t for how you treated the entire staff with care and empathy. I think it’s safe to say we’re very different from each other, but that’s what is coolest about our friendship.

To Max, I didn’t think your writing could get any better when we tabbed you as football editor last spring. I was wrong. Your journalism chops evolve by the day, and you’re one of the most consistently consistent editors I’ve ever seen.

To Sophia and Ben, you guys have made my life easy over the past few months. Your drive to make TDC’s multimedia presence the best it can be has paid off, and you should both be infinitely proud. I’m sure there’s more to come.

To all of my past editors, thanks for showing me the ropes and being patient with me even when I had absolutely no idea what I was doing. I know a thing or two because I’ve seen a thing or two, and it’s all thanks to you all.

To Spencer and Seth, you guys rock. The 2021 Penn State men’s lacrosse beat was so much fun, and it was mainly because you both were skillful and passionate about telling stories. Footblog is in good hands.

To Joe for real this time, thanks for humoring me even when I’m being a complete ignoramus. You make me laugh even when I really don’t feel like laughing, and it’s helped me get through each day tremendously.

To Courtney, Megan and Will, good luck! I can’t wait to see how the Collegian develops under your guidance.

OK, “to” doesn’t look like a real word anymore. Peace out.

Andrew Porterfield is a junior majoring in digital and print journalism and was The Daily Collegian’s 2021-22 digital managing editor until 6:15 a.m. this morning.

Andrew Porterfield is the digital managing editor for The Daily Collegian. He is a junior studying digital and print journalism with a minor in sports studies.