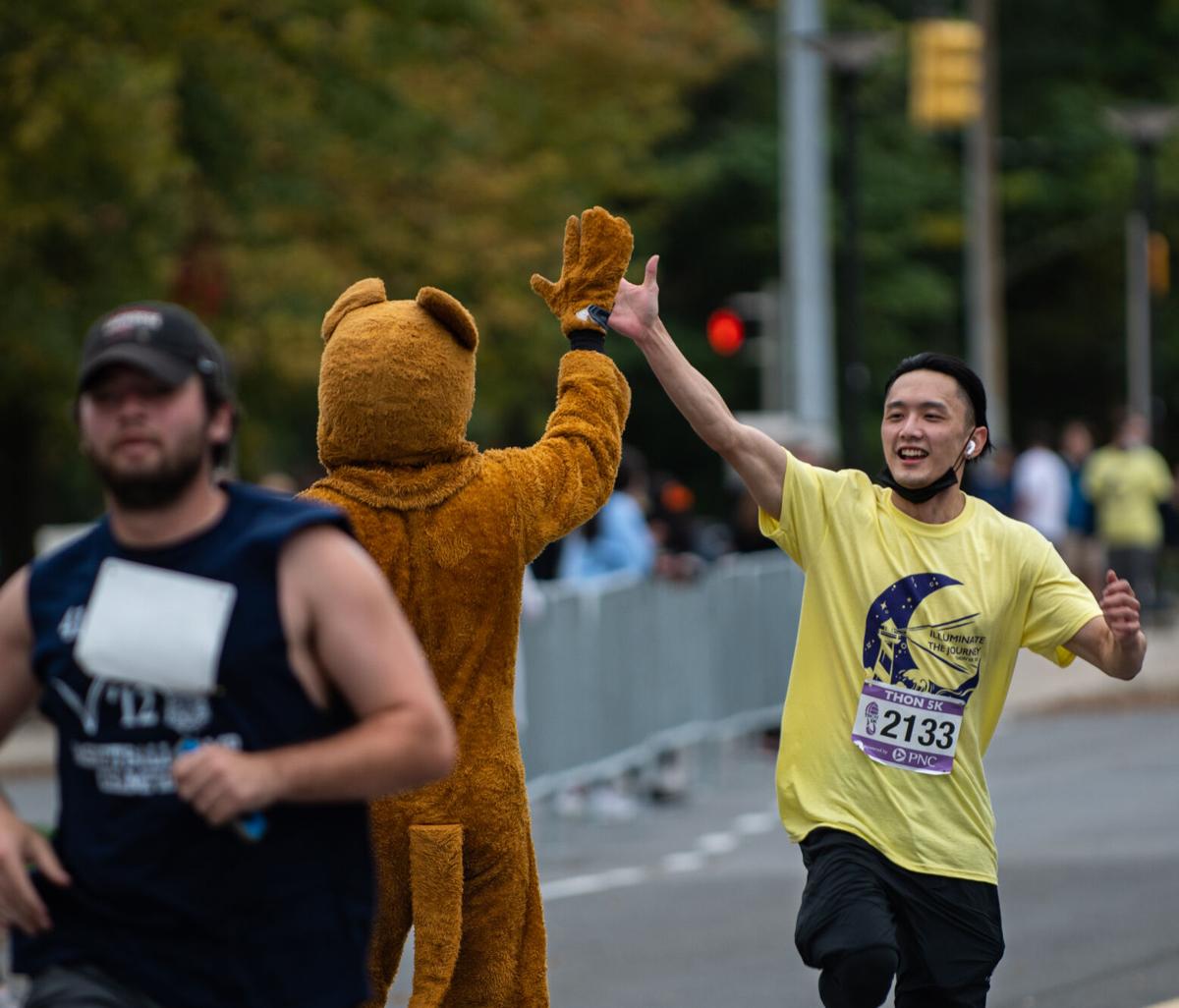 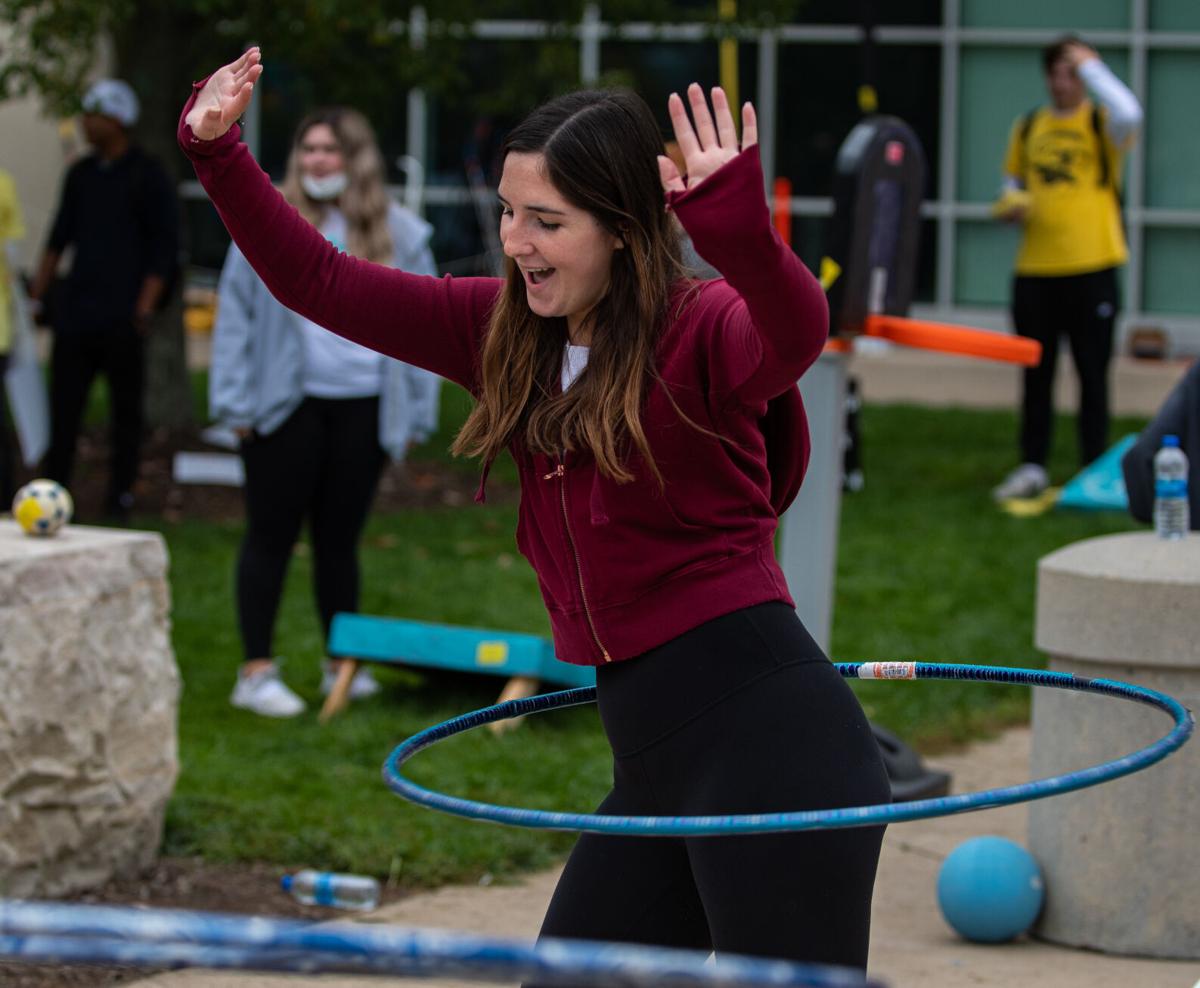 Hailey Tyrrell (junior-communication sciences and disorders) hula hoops near the finish line of the THON 5K race at the Bryce Jordan Center in University Park, Pa. on Sunday, Oct. 10, 2021. 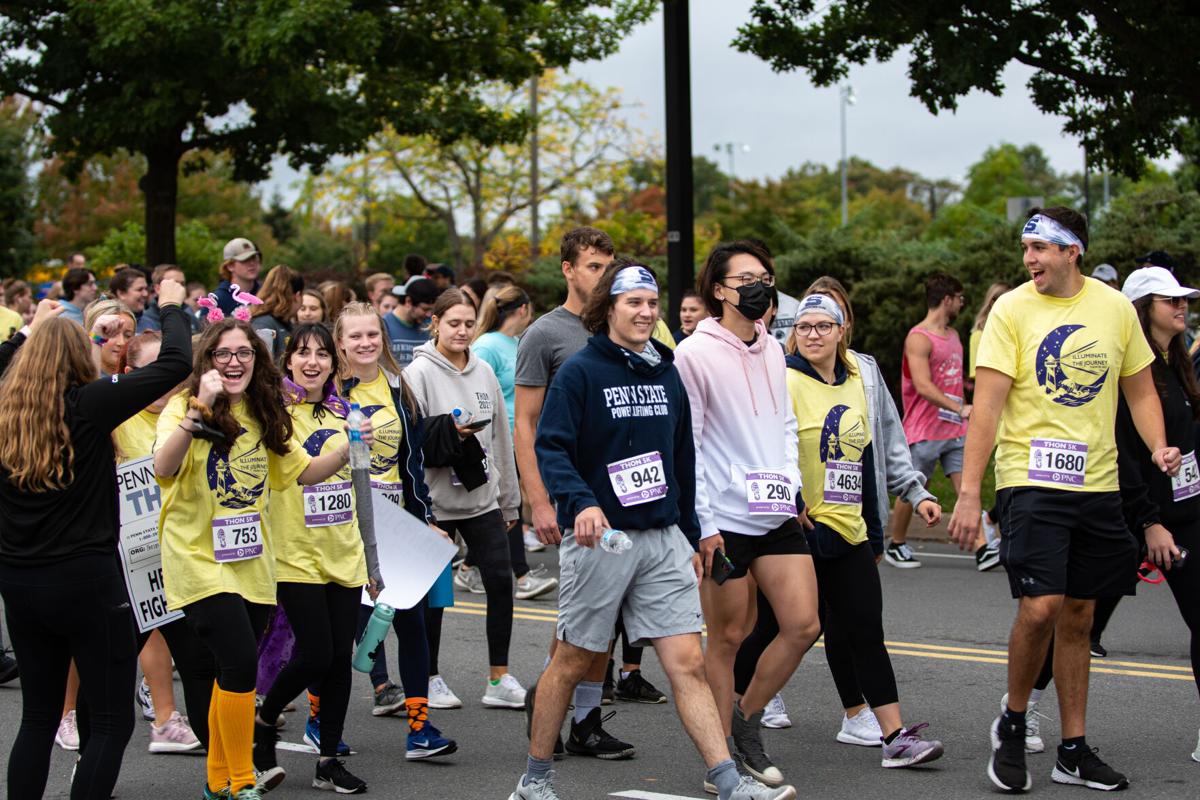 Some participants in the THON 5K walk in the annual race on Sunday, Oct. 10, 2021 in University Park, Pa. The race began and finished at the Bryce Jordan Center. 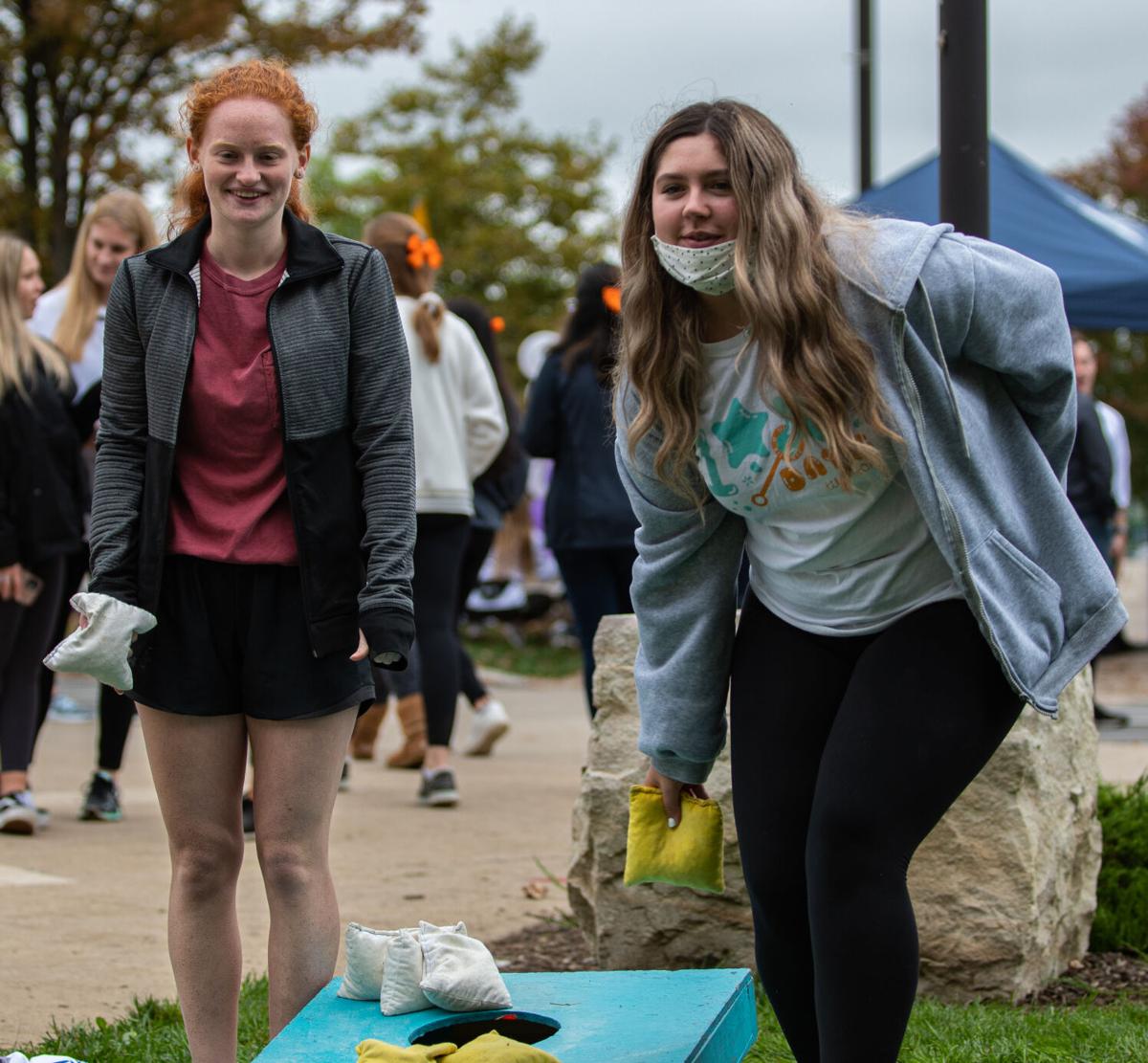 Rhia Martin (sophomore-biology and Spanish) and Emily Nolen (sophomore-nursing) play cornhole during the annual THON 5K, one of several activities set up around the finish, on Sunday, Oct. 10, 2021 near the Bryce Jordan Center in University Park, Pa.

Video by Will Rosenblatt | The Daily Collegian

Three, two, one, GO! Hundreds took off from the starting line on Curtin Road in front of the Bryce Jordan Center Sunday, racing in a 3.1-mile loop around campus for THON’s annual 5K.

Penn State THON is the largest student-run philanthropy in the world, raising money for its sole beneficiary — Four Diamonds at Penn State Health Children's Hospital — and culminating in a 46-hour dance marathon in the spring.

Live music, outdoor activities, pop-up shops, a raffle drawing and pizzas were seen on the sidewalks of the BJC’s northern side, greeting race finishers and entertaining spectators.

Students in various THON organizations set up water tables, carried supportive signs and cheered on the racers from the sidelines of the 5K course.

Katie Trainor, a member of THON’s Hospitality committee, was one of those students. Trainor’s (senior-pre-law) committee set up a water table at the finish line, handing out plastic cups of water to runners as they finished.

According to Trainor, the 5K is the “kickoff event” for the THON fundraising year, designed to “get [people] hype and support the kids."

Though THON’s fundraising efforts continue year-round and never fully end, Trainor said the event “gets everyone excited,” “brings everyone together” and “gets them ready” for a large fundraising push leading up to THON’s 46-hour dance marathon in February.

More than the money raised, Bielinski (senior-rehabilitation and human services) and Trainor said the event is about the support it provides to THON families and children — financially and emotionally.

“We’re trying to help them feel the normalcy that THON normally brings for them,” Trainor said. “It gives us a chance to bond. It gives everyone a chance to come out and see each other in a more casual environment.”

The theme of this year’s 5K, according to Bielinski, is “Illuminate the Journey,” which represents “coming out of that dark place” people found themselves in during the coronavirus pandemic and entering “an entire new year of light and hope,” Bielinski said. The theme was selected by Hope Hilsenrath and Ian Goetz, the THON 5K captains.

Bielinski also shared Trainor’s sentiments and said the overall mission of “pre-THON” events like the 5K is to keep the mission and notion of THON alive year-round.

“THON is not just one 46-hour dance marathon in February,” Bielinski said.

Runner Robbie Fenstermacher said he believes the 5K accomplishes Trainor’s and Bielinski’s mission through the sheer number of people who participate or come to watch.

“This has a lot of visibility in the community,” Fenstermacher (graduate-business administration) said. “It’s easy to see everybody running around, so it brings more attention to everything.”

“It’s really important, especially seeing how many people come out spreading the word,” Shashin, a 23-year-old from Illinois, said. “It kind of creates a community. People feel close to each other. It’s really one push effort for the community and the kids.”

According to Bielinski, the THON 5K is the organization’s biggest event aside from the 46-hour dance marathon in February.

Bielinski said it’s been two years since the event was held in person, with the last 5K in 2019 before the onset of the coronavirus pandemic.

The event was “a hit,” and Bielinski said she was impressed with the amount of people in attendance.

“To have this race back in person today was an experience like no other,” Bielinski said. “Being able to provide something of the same magnitude that we did in previous years is really a step in the right direction.”

The THON 5K, according to runner Grace Kimzey, reaches people far beyond Penn State. She said people from out of state without a direct affiliation to the university expressed support to her and other participants in the event.

Kimzey (senior-meteorology) said the event is a “good representation of the physical aspects of THON.”

This year’s 5K was runner Natalie Stevens’ first, and she said it was “crazy” seeing the number of people in attendance — all coming together to advance the mission of THON.

“It’s good to be out with everybody,” Stevens (graduate-business administration) said. “Coming here and realizing what this was all about was really cool for me.”

Bielinski said she believes experiences like Stevens’ are the most important aspect of events like the THON 5K.

“To be back in person and seeing [kids’ and families’] smiles and hearing their laughter up close and in person — it’s just a feeling we can’t put into words,” Bielinski said. “At the end of the day, this is what we fight for. It was really magical to see that here.”