On Friday, the State College Police Department responded to a stabbing on the 1200 block of South Atherton Street, according to a press release.

State College police responded to the scene at 11:10 p.m. where they found a 39-year-old man with "multiple stab wounds," the release said.

SCPD said the man was able to provide information about the assailant and was flown to UPMC Altoona to be treated. According to the press release, he's in "stable condition."

Marvin T. Williams was charged with a felony count of aggravated assault and two misdemeanor charges of simple assault and disorderly conduct of engaging in a fight.

Police arrived at Williams' house at 11:45 p.m. He was placed in custody and brought to the Centre County Correctional Facility.

Williams is scheduled for a preliminary hearing on Wednesday. 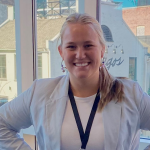 Olivia Estright is a news editor and podcaster at The Daily Collegian. She is a junior majoring in digital and print journalism with a minor in sociology. She says "slay" unironically.