Police responded at 4:17 a.m. Sunday to 330 W. College Ave. to assist O'Malley, who was found unresponsive by a roommate, the release said.

According to the release, "the preliminary investigation indicates the death is accidental in nature and that excessive alcohol consumption was a contributing factor."

Earlier in the night, O'Malley had attended a party at 222 W. Beaver Ave. and consumed an "excessive amount" of alcohol during a drinking game, the release said.

A toxicology report is pending, the release said.

The Centre County Coroner’s Office and State College police are investigating the incident together, the release said.

O'Malley was a fifth-semester student in Penn State's College of Engineering, according to Penn State spokesperson Lisa Powers.

"The death of any student is heartbreaking and our hearts go out to all who knew him," Powers said via email.

After three years of halted proceedings, James and Evelyn Piazza requested a motion to lift … 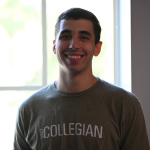 Nick Stonesifer is a news editor for The Daily Collegian. He is a junior majoring in telecommunications with a minor in Spanish.