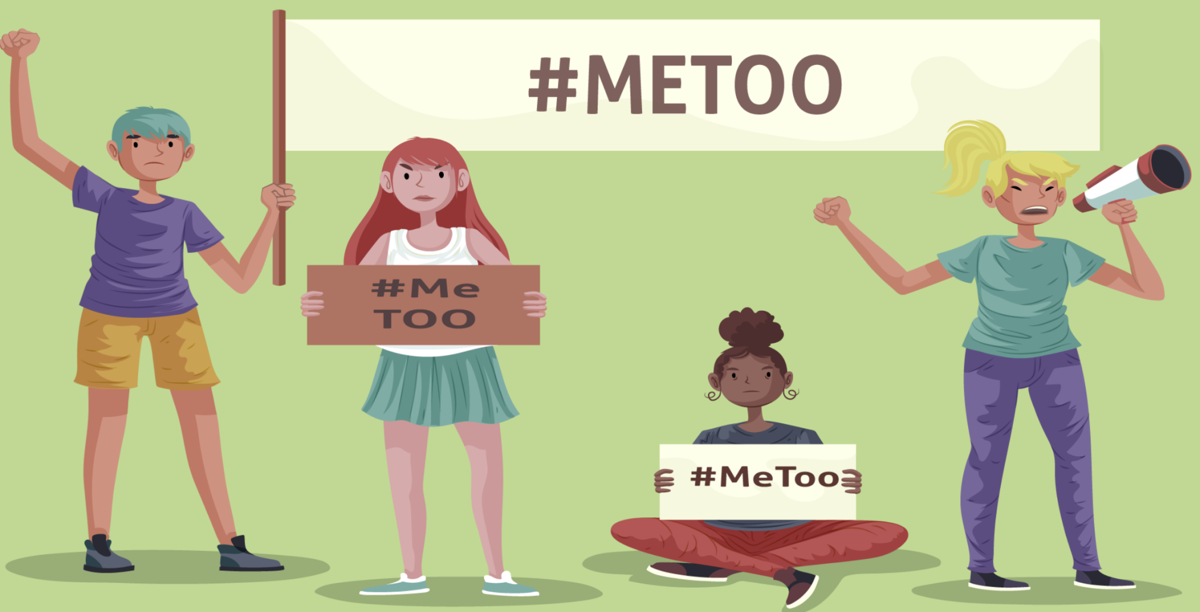 After a reign in Hollywood that left many actresses with lasting trauma, on March 11, 2020, film producer Harvey Weinstein was found guilty of two sex crimes and sentenced to 23 years in prison for rape and sexual assault — a pivotal moment for the #MeToo movement.

The phrase “me too,” which was originally coined by activist Tarana Burke in 2006, was reinvigorated as a movement after Oct. 5, 2017, when the New York Times released an exposé titled “Harvey Weinstein Paid Off Sexual Harassment Accusers for Decades.”

The article revealed how the esteemed Hollywood producer had sexually assaulted various aspiring actresses whose accusations dated back two decades.

In the aftermath of the article’s release, over 80 women came forward with allegations against Weinstein, including Angelina Jolie, Gwyneth Paltrow, Salma Hayek, Cara Delevigne, Rose McGowan and Lupita Nyong’o.

In the three years since the initial story made waves, women across professions have come forward sharing their own stories with the hashtag #MeToo, influencing corporations and institutions to hold its employees more accountable and provide a safer working environment for women.

However, Penn State students believe there’s still a lot of work to be done to support survivors of sexual assault.

Autumn Adams is the president of the Penn State chapter of Sisters on the Runway, a national nonprofit organization committed to spreading awareness of domestic violence and sexual assault, while providing support for survivors.

“The #MeToo Movement has become a very big deal in my life with my participation and role in Sisters on the Runway,” Adams (senior-kinesiology) said via email. “To me, this movement signifies courage because these women — and sometimes men — come forward to talk about a traumatic event that happened in their lives and that’s true strength.”

Adams first heard about the #MeToo movement via Twitter when she saw the #MeToo hashtag trending. She said Weinstein is an example of a man exploiting his status and power to take advantage of women.

“A man like him preys on the vulnerability of young women in Hollywood who just want to further their careers and become better,” Adams said. “Now, he no longer has that power and never will again.”

The initial news of the sexual assaults wasn’t the only thing that upset Adams, as she also discussed the societal reaction, which she said had its fair share of victim-blaming.

“I think these convictions raised a lot of backlash [toward] these women with remarks like, ‘She probably slept with him to get to the top and now she’s trying to take him down for her own actions,’” Adams said. “It’s statements like this that keep women from telling their stories because the thought that no one will believe them turns them away.”

This isn’t an unsolicited fear — the hashtag #ProtectOurBoys also went viral following the increase in convictions as social media users denounced the idea of believing the accuser due to their perception of false claims.

According to the National Sexual Violence Resource Center, studies suggest an estimated 2 to 10% of sexual assault allegations are false, meaning there is an estimated 90 to 98% chance the accuser is telling the truth.

“There are some cases where the accuser is wrongful, but way more often than not the woman is telling the truth,” Adams said. “It’s in my nature to always believe the survivor of an assault and get them the help that they need.”

Adams said she believes the world has changed for the better since the #MeToo movement became prevalent, but emphasized there’s still much work to be done in society to support survivors, as they often endure trauma for life due to their experiences.

“Survivors of sexual assault experience many psychological issues as well as physiological issues after a completed rape,” Adams said. “I think the health care system needs some serious work in terms of therapy, because not everyone can afford a therapist and some people live in lower socioeconomic areas. They shouldn’t be denied health care just because they cannot afford it.”

According to the Rape, Abuse & Incest National Network, 8 out of 10 rapes are committed by someone known to the victim, with 39% being an acquaintance and 33% a current or former partner.

“More often than not, a woman knows her attacker on a personal level,” Adams said. “Report them, because they may say they love you, but they don’t show you true love. Sisters on the Runway will always have an open door to everyone, and we will always listen. We believe you.”

Penn State student Brooke Hoard also first came across the #MeToo Movement via her Twitter feed, where she said everyone was talking about it, from her followers to celebrities. She said she was glad Weinstein was convicted for his crimes, but was upset that it took so long.

“It was the first time someone of high social status in the industry was convicted and it held weight,” Hoard (senior-biobehavioral health) said via email. “It encouraged so many more women to speak up and for their voices to be heard.”

Hoard is the president of College Moxie, a women empowerment group on campus that serves as an outlet for women on campus to talk about issues that are prominent in their lives as college students — such as “identity, comparison, relationships, trust and sex.”

“This movement is relevant to campus life because the same thing happening in the workplace is also happening on campus,” Hoard said. “Sexual assault impacts every aspect of someone’s life. The movement has given survivors the nudge to speak out against their abuser.”

Hoard said she’s seen an increase in sexual assault reports at Penn State, citing the amount of Timely Warning Alerts sent out during her time on campus. She said she doesn’t think this is because there’s a lot more cases of sexual assault on campus, but rather that students are feeling comfortable enough to report it.

Although Hoard said she was appalled when she first learned the news of Weinstein’s conviction, she said she doesn’t believe it came as a big surprise to many people who have seen the harsh reality of how women are treated in the workplace.

“The convictions said what we already knew, assumed or personally experienced,” Hoard said. “Sexual harassment happens more than companies and industries like to admit, and these convictions made it hard for them to deny the allegations.”

Although she emphasized that the movement has helped to increase the amount of reported assaults, Hoard also said not much has changed regarding how survivors are treated by society.

“Women are still shunned for speaking about being sexually assaulted,” she said. “Men also face huge backlash for saying they have experienced sexual assault. We have tremendous strides to go to erase the stigma surrounding sexual assault.”

Hannah Nelson is the president of Penn State’s Survivors and Allies United, which aims to end gender discrimination and sexual assault on campus. She is also the social media director for Her Campus at PSU, an online magazine for college-aged women.

Nelson (senior-journalism and history) said the #MeToo movement has been particularly significant for college students because “sexual assault impacts most college aged individuals,” adding the movement has encouraged more sexual assualt activism to be present on college campuses.

“Sexual assault is even more prevalent in college because everyone is dating and seeing people romantically with no adult supervision and often alcohol,” Nelson said via email. “Education for college students about consent is present, but it’s not nearly emphasized or remembered enough.”

She said she clearly remembers the breaking news of the Weinstein convictions because it was the first case she really paid attention to. After that, Nelson said she followed other cases — including those involving Matt Lauer and Kevin Spacey — and realized how widespread sexual harassment and abuse really was.

“These convictions opened the eyes of so many people and showed us that gender discrimination happens all over the place,” Nelson said. “It’s a part of our culture, which is sad to say, but it’s because it’s so normalized.”

According to RAINN, “out of every 1000 sexual assaults, 995 perpetrators will walk free.” This is first due to the fact that three out of four cases go unreported.

Out of the 230 sexual assault cases that are reported to the police, 46 cases lead to arrest, nine get referred to prosecutors, five lead to a felony conviction and 4.6 rapists get incarcerated.

“The Weinstein case and his eventual conviction was a win for survivors of discrimination and abuse because he got held accountable for his actions, and most of the time that doesn’t happen,” Nelson said. “The #MeToo Movement I think has helped people consider discrimination in their own lives and help them realize that behavior isn’t acceptable in any form.”

Nelson said there is much more work to be done, especially at the college level and in marginalized communities where sexual assault is more likely to happen.

“To me, the #MeToo movement is a way for me to be an ally,” Nelson said. “The #MeToo movement was created by Tarana Burke to help with sexual assault in communities of color. As a white woman, it’s my duty to raise their voices so that the issue of sexual assault within their community is eliminated. I will say that the spirit of the movement did help me understand my experience as a survivor.”

Nelson said she understood why any woman, man or non-binary individual may be afraid to speak up about their sexual assault, but emphasized how important it is to confide in a trusted individual who can offer support.

“Sexual assault is an extremely traumatic, shameful and confusing experience for many people,” Nelson said. “If you’re a survivor, please talk to one person about your experience. It could be a roommate, friend, therapist, parent or advocate from the Gender Equity Center here at Penn State. Letting your experience fester inside you will tear you apart.”

Editor's Note: Hannah Nelson was a reporter for The Daily Collegian in spring 2018.

Year in Review | Reflecting on the political significance of 2020