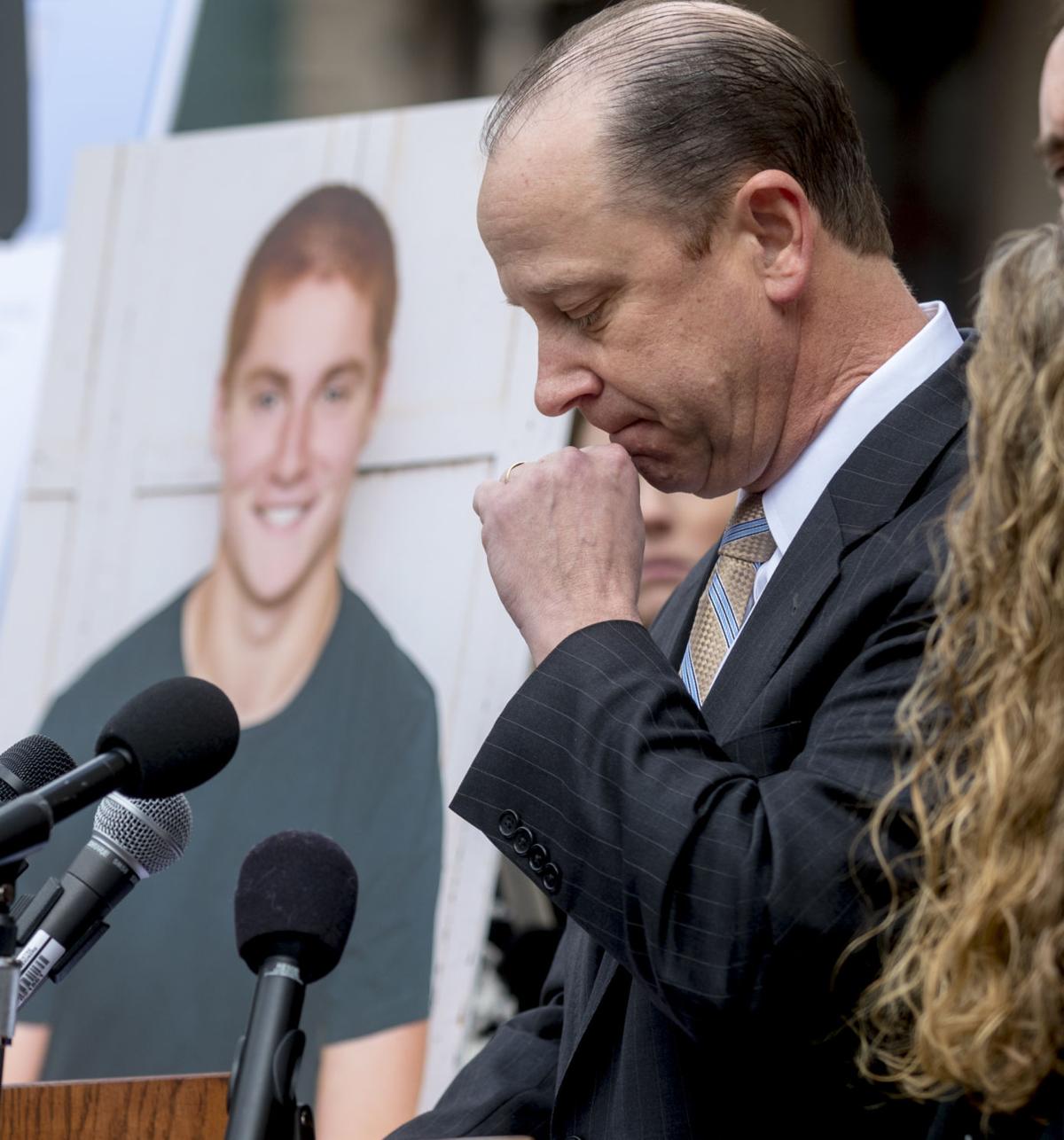 Jim Piazza pauses as he addresses the media during a press conference explaining their role and feelings of new Timothy J. Piazza Antihazing legislation during the second Penn State Beta Theta Pi preliminary hearing at the Centre County Courthouse on Friday, March 23, 2018. 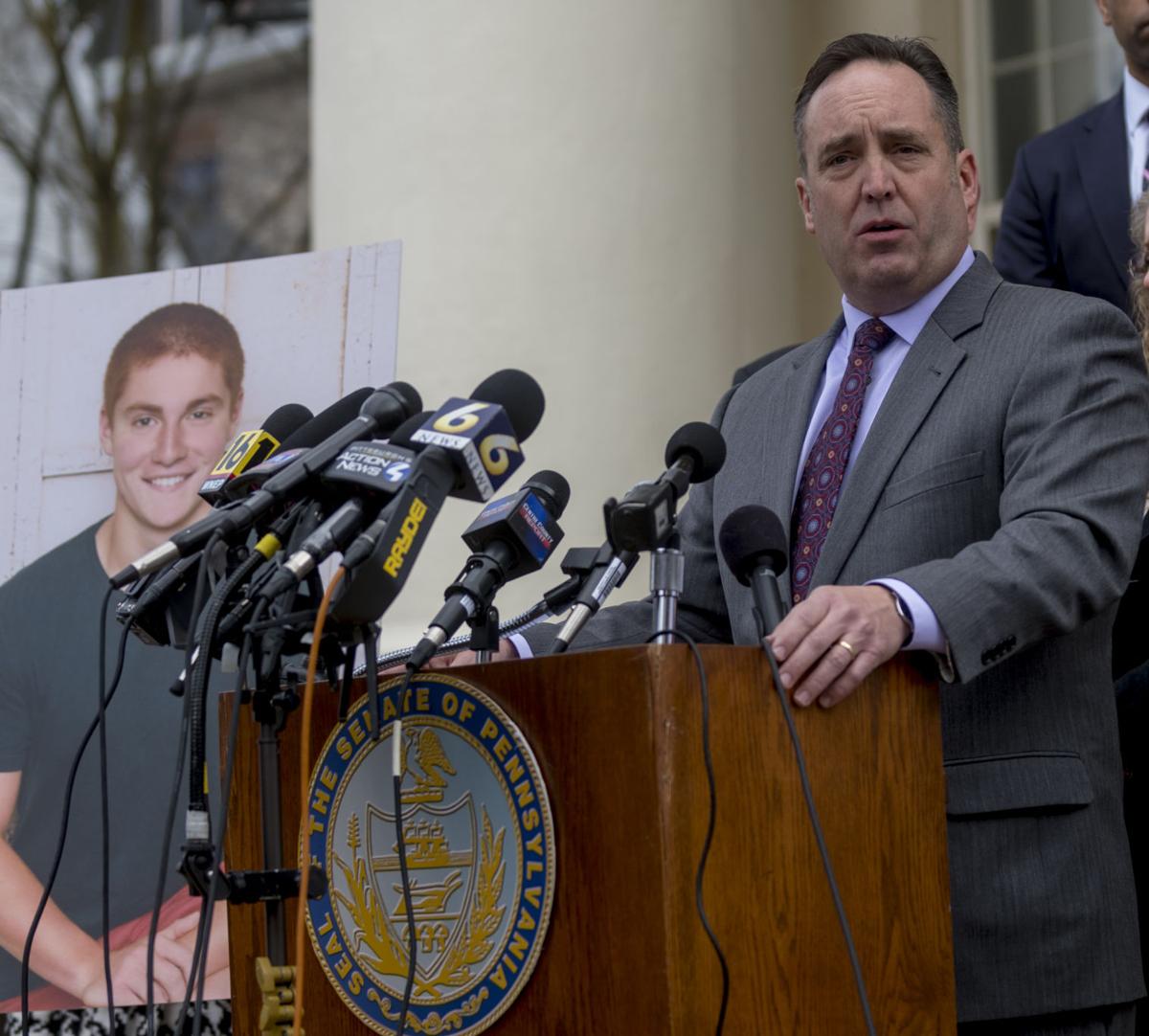 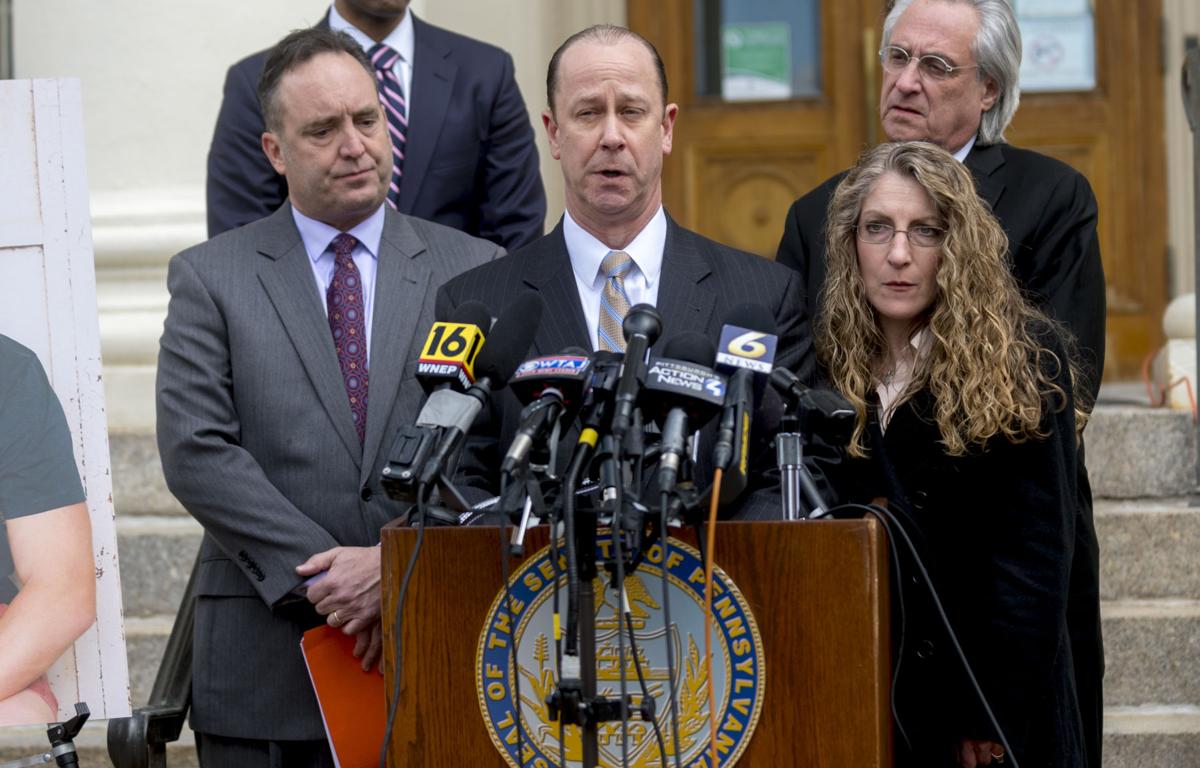 Piazza suffered a fractured skull and lacerated spleen following a hazing-fueled night, in which the sophomore consumed at least 18 drinks in 82 minutes and fell “hair first” down the fraternity’s basement stairs.

Brothers waited hours before calling for help. Piazza was pronounced dead at the Hershey Medical Center the morning of Feb. 4, 2017.

His death caused Penn State to permanently ban Beta Theta Pi and sent numerous former brothers to court for their roles in the alcohol-fueled rituals leading up to Piazza’s death and the deletion of security footage depicting the fatal night.

Additionally, since February 2017, Piazza’s death has sparked a transformation in Penn State greek life, Pennsylvania hazing law and the national conversation on hazing.

The university has taken several measures to reform greek life culture since Piazza died. The university adopted a no-tolerance policy toward hazing, implemented a scorecard for greek life organizations, and stipulated that students must earn at least 14 Penn State credits a semester and maintain a 2.5 GPA to participate in greek life.

Students are only able to rush after earning 14 credit hours at Penn State or 27 transfer credits, meaning most first-semester freshmen are barred from rushing.

Additionally, fraternities and sororities are required to register socials and are limited to 10 socials per semester. The university has banned or suspended numerous greek life organizations since Piazza’s death.

In January, it was announced that the university plans to create and house the Timothy J. Piazza Center for Fraternity and Sorority Research and Reform — a research center that will study greek life culture across the country, develop a national scorecard for greek organizations, host conversations on greek life-related topics and sponsor research.

"With the creation of the Timothy J. Piazza Center for Fraternity and Sorority Research and Reform, university leaders will now have a dedicated center for the study of best practices and assessment in fraternity and sorority life across the country," Penn State president Eric Barron said in a January press release. "The Piazza Center will provide an essential leadership role to compel the collective change required.”

Among changes made includes the creation of the vice president for health and safety role, the creation of a dry period during recruitment, the passing of a vote to make all new member processes four weeks long, the drafting of new social expectations and guidelines and the restructuring of Standards of Excellence.

In addition, IFC vice president for communications Leonard Fontes III said the IFC is working to increase its “accountability and transparency” among chapters, in a statement from the IFC.

“As we move forward with these changes within our community, we plan to build Penn State into a model for all greek communities,” Fontes said. “It is our ambition for Penn State to lead our country into a new era of greek life. One that is both safe and beneficial to the happiness and wellbeing of all students who are a part of it.”

The impact of Piazza’s death spanned further than changes in university policy. In fact, his death rewrote Pennsylvania hazing law.

Just over a year after Piazza’s death, Pennsylvania Senator Jake Corman introduced the Timothy J. Piazza Antihazing Bill to Pennsylvania legislature. The bill, which was met with unanimous bipartisan support, was signed into law by Pennsylvania Governor Tom Wolf in October 2018.

As Wolf signed the bill into law, Piazza’s parents, Jim and Evelyn, watched beside him. The Piazzas have acted as catalysts for much of the push for hazing reform at a university, statewide and national level.

The law created tiers for hazing in Pennsylvania, stipulated that institutions must release hazing reports, established categories of organizational and institutional hazing, and required institutions and high schools to adopt and enforce a written anti-hazing policy.

Penn State will release biannual hazing reports in accordance with the law. Thus far, the university has released two reports.

Nationwide, the Piazzas continue to foster a dialogue on hazing and its consequences. Jim said he and Evelyn have spoken to “well over 100,000” college students about Piazza and hazing.

Through speaking to students, Jim said he hopes to educate students on what hazing is and the consequences of it.

Jim said university action often talks “at” students, but he and Evelyn speak from the heart and bring emotion into the conversation in an attempt to make students ““feel it in their stomach, feel it in their heart.”

While the state laws that the Piazzas advocate for deal with the crime of hazing, federal laws they promote deal with accountability and transparency.

Among federal bills introduced includes the Report and Educate About Campus Hazing (REACH) Act, which hopes to reduce hazing on college campuses and educate the community on hazing. The act would also require universities to report instances of hazing under the Clery Act.

Additionally, the Educational Notification and Disclosure of Actions risking Loss of Life by Hazing Act (END ALL Hazing Act) would require institutions to report hazing allegations to campus and local law enforcement and create a website to identify student organizations that have hazed in the past five years.

“We’re certainly proud of the difference we’ve been able to make at Penn State already. I know that the number of violations has gone down, I know that there’s been situations where people have picked up the phone and called 911, so we’ve got that discussion going, and I think we have that discussion going nationally,” Jim said. “If you look around the country, universities across the board are taking a tougher stance against hazing.

“There’s been organizations — mostly fraternities and sororities —around the country that have been suspended or shut down. You never really heard about it as much [before], you’re hearing about it now. You’re also hearing about charges being brought against people when someone doesn’t die. That never happened in the past,” he said.

Jim and Evelyn continue to encourage states to adopt stricter laws regarding hazing. According to Jim, the consequence of hazing in many states is comparable to a traffic ticket. The Piazzas, among many others, hope to change that.

Ultimately, Jim said he hopes to continue the dialogue on hazing, increase transparency in greek life and harshen the punishments for hazing.

Jim acknowledged there has been a lot of positive, forward movement, but he said there’s still more to be done.

The Timothy J. Piazza Memorial Foundation has donated $50,000 to the Philadelphia Shriners Hospital for Children in memory of Timothy Piazza, …