Juntae Rocker went to Busan, South Korea, to study at Pusan National University over summer 2022 through the Critical Language Scholarship Program, a U.S. Department of State program that fully pays for a summer of studying abroad.

The program’s website said it concentrates on languages that are “essential to America’s engagement with the world.”

Busan is known for its seafood, Rocker said. While seafood is not his favorite, Rocker said he still ate lots of it.

Rocker said “cultural excursions” could mean “a lot of things.” For example, Rocker and his group visited Gamcheon Cultural Village, a village of colorful, decorated houses.

The village appears “like a painted landscape,” Rocker said.

The group also visited the United Nations Memorial Cemetery to learn about all of the nations that participated in the Korean War, as well as how the U.N. is currently involved in South Korea.

Rocker also toured Beomeosa and described it as a “beautiful set of temples.”

CLS desires to create the most diverse group of students possible, Rocker said. The group Rocker traveled with contained a variety of ethnicities as well as majors, including linguistics and STEM majors.

Rocker said this diversity “added to the experience since a lot of people could provide unique and different perspectives.”

The academic rigor of the program is what Rocker said attracted him to the CLS program. He said the program promoted its “really high language gains.”

Additionally, the CLS program gave Rocker the chance to return to his birth country.

Rocker was born in South Korea to a U.S. military father and Korean mother, he said.

His family moved to Arizona for elementary school, where his father died when Rocker was 10, he said. His mother took him back to South Korea for middle school, where he attended an international school in Paju.

From there, Rocker moved back to America for high school and college. Rocker said he didn’t speak Korean much upon returning to America.

“I used to be really good at Korean when I was young, but then because I learned English and because I didn't practice [Korean] as much, I lost my mother tongue, my native language,” Rocker said.

Rocker said the trip to Korea helped him to “reimmerse” himself in Korean culture.

“It just felt like the right decision for me,” Rocker said.

Rocker said the program shows how much a student has improved over the course of studying abroad.

Students are given an “oral interview exam” before traveling. After the study abroad period, the program gives the same exam.

Before the program, Rocker said he was only confident in “basic conversation” in Korean. He said he would “stumble” if certain topics came up or if he was around a group of fluent Korean speakers.

Because of the program, Rocker said his confidence has grown.

His writing abilities have also progressed, though not without struggle.

Lan Kim, the coordinator of the Korean Language Program at Penn State, said many Penn State students study Korean to add to their studies of international relations or international business.

She said there are many U.N. jobs in South Korea. Some of her students study Korean to become international lawyers, diplomats or English teachers in Korea. Some are in the U.S. military.

The Penn State football team played the Ohio Bobcats at noon on Sept. 10 and won 46-10 in Be…

Other students choose Korean as their language requirement because they want to travel to Korea or because they enjoy Korean food, Kim said.

There’s also a desire to understand Korean movies and music, which Kim said are becoming more popular. Sometimes there are jobs for Americans in Korean entertainment.

Kim pointed to the K-Pop Music and Dance Club, which Rocker was a part of, as an example of how popular Korean culture is at Penn State.

“They dance so well,” Kim said. “They are like professionals.”

Kim said she always tells her students that studying abroad can be “a great opportunity.” However, it can be expensive, which is why any chance to do it for free is a big advantage.

Kim said she saw Rocker’s improvement in his understanding of Korean through the CLS program, and she encourages all qualified students to apply.

Angelina Jenkins said she met Rocker through BLUEprint Peer Mentoring, of which she was the program coordinator.

In 2019, Rocker was a mentee for BLUEprint, Jenkins said. He would go on to be a mentor.

Jenkins said she was able to “help Juntae both as an adviser and a mentor.”

When Jenkins first met Rocker, he “very much wanted to be involved,” she said.

Even through the pandemic, Rocker thought it was important to be active in the “at-large” Asian American community and also the community at Penn State.

Jenkins said Rocker took part in the Asian Pacific Islander Desi American Caucus as well as the K-Pop Music and Dance Club up until his junior year.

Both organizations “promote Asian and Korean culture and bring the community together,” Jenkins said.

Rocker said he hopes to apply again. He said students can do the program twice.

He said the program’s acceptance rate is around 10%.

Rocker said his “ultimate goal” is to attend graduate school in South Korea, specifically Yonsei University, which he described as part of “South Korea’s Ivy League.”

Yonsei University has an interdisciplinary Korean unification studies program, according to Rocker.

Through this program, Rocker said he would gain “a really strong, nuanced perspective on U.S.-Korea relations and the security dilemma with North Korea.”

Jenkins said Rocker’s extensive engagement in Asian groups on campus has helped him win scholarships and opportunities like the CLS program.

“Juntae is an amazing example of when you really care not only about a culture but a community,” Jenkins said. “How there are really great opportunities you can partake in … being able to have the door open to you by simply caring can really do a lot for not just your professional experiences but your personal experiences.”

‘Today, everybody here is Mahsa Amini’ | Protesters unite in front of Penn State’s Palmer Museum as ‘atrocities’ take over Iran

Editor's Note: The names of individuals interviewed for this story have been changed to protect their identities, and verified through fact-ch… 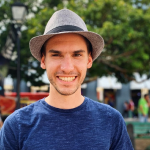