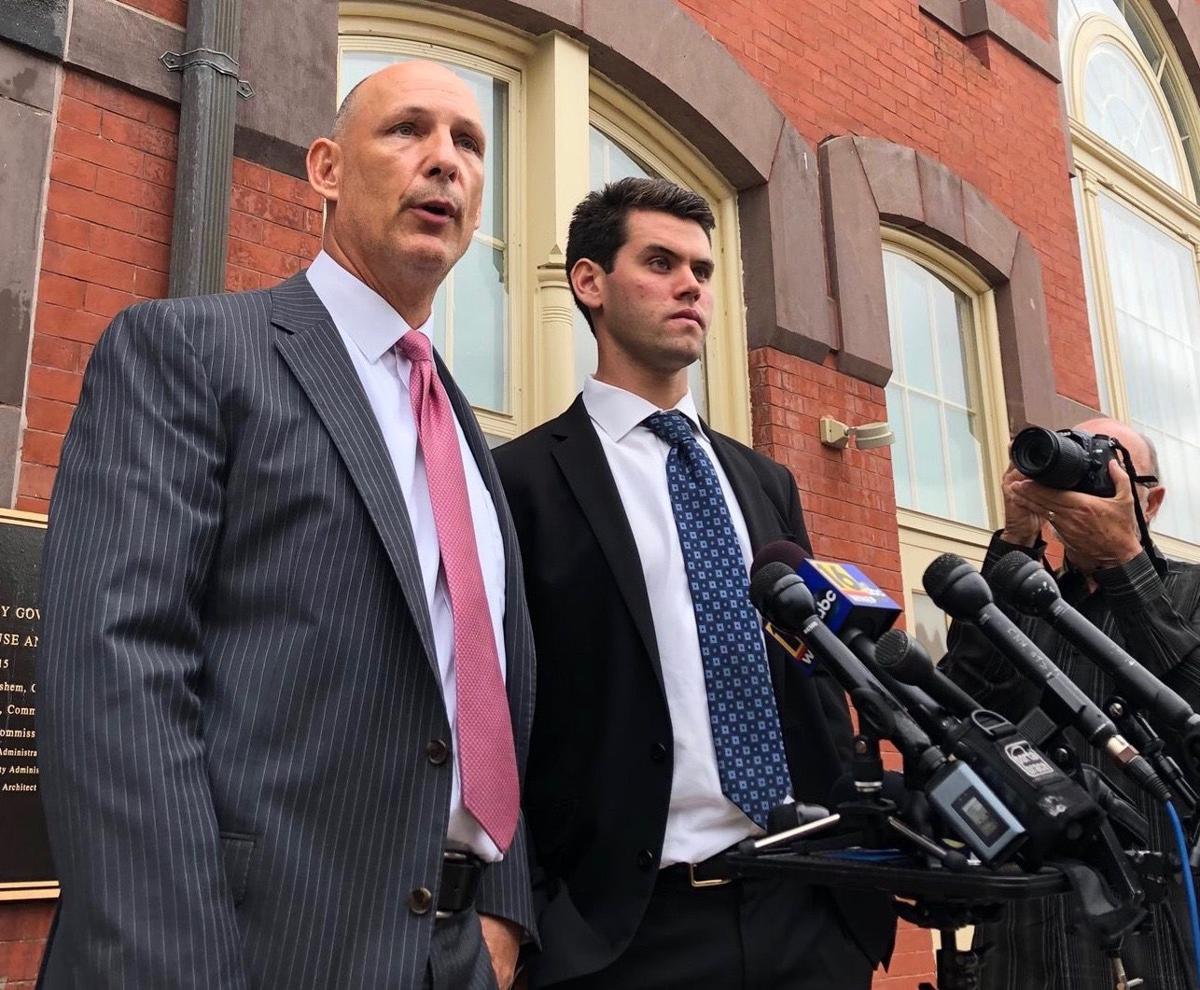 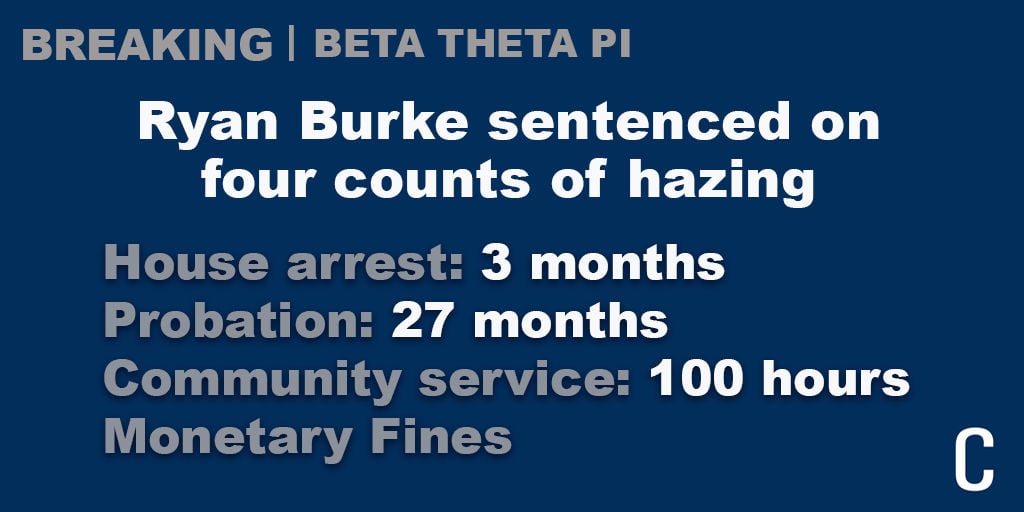 Ryan Burke was the first former Beta Theta Pi brother to be sentenced on Tuesday for charges surrounding the events of Timothy Piazza's death. In addition to three months of home detention, Burke, 21, received a total of 27 months probation and $27,000 in fines on the basis of nine charges — including four counts of hazing.

Piazza died on Feb. 4, 2017, after falling down a flight of stairs at the Beta Theta Pi house, leading to a lacerated spleen and fractured skull. He consumed at least 18 drinks in 82 minutes, as part of a hazing ritual called “the Gauntlet.”

For the first count of hazing, Burke will be placed on three months of house arrest, three months of additional probation and a fine of $1,000. With this charge, Burke is also required to pay the Piazza family $1,000 in restitution.

His four misdemeanor counts of unlawful acts relative to liquor resulted in fines of $300 per count. And, the summary offense of underage drinking resulted in a $500 fine and a license suspension for Burke.

Prior to the ruling, the Pennsylvania Attorney General’s Office had requested that Burke receive 30 days of incarceration, two years probation, 100 hours of community service, a 90-day license suspension, a $1,000 fine and a requirement to participate in anti-hazing events.

But Philip Masorti, Burke’s attorney, argued that his client should receive one year of probation with 200 hours of community service — also suggesting house arrest if any incarnation were to be received.

In a press conference following the sentencing, Masorti said while he and his client are pleased with the sentencing outcome, Burke is “certainly not the cause” of the incidents that unfolded in the fraternity in February 2017.

"An element of this case certainly is our freedom of choice and our free will,” Masorti said. “It’s very regrettable, but it is nonetheless true that Mr. Piazza chose to pledge, he chose to drink, he chose to attend the gauntlet.”

Despite not attending the hearing, Tom Kline, Piazza's family attorney spoke on their behalf after the hearing concluded.

“With the recognition by the sentencing judge of the aggravating circumstances involved in the death of Tim Piazza, along with the sentence including loss of freedom of [an] admitted perpetrator of the crime, today’s sentencing is an important step on the long road to justice for the Piazza family,” Kline said.

The prosecution argued throughout the sentencing that Burke was in charge of recruitment for the fraternity that year and was also seen on surveillance video present at drinking stations, where pledges consumed high quantities of alcohol. Burke was seen on footage providing alcohol to Piazza, who was 19 years old at the time. Later, Burke was one of the brothers who carried Piazza upstairs. They waited more than 12 hours to call for medical help.

Brian Zarallo, chief deputy attorney general, called Burke “the face of Beta Theta Pi” and said he was the first to greet pledges before taking them to meet the other high-ranking members in the fraternity.

Zarallo played video footage as well as a phone recording Piazza left for his girlfriend from the night of his injuries. Parents Jim and Evelyn Piazza left the courtroom before it was played.

Zarallo argued that hazing is not an isolated incident but involve actions that are "far more dangerous" and "far more organized." He used this to explain the intent of Burke’s actions, considering he was in the same position as the pledges the year before.

After the AG's office presented their 40-minute argument, Jim Piazza approached the courtroom podium to give an impact statement.

With Jim Piazza's hands trembling, he gripped the podium and said planning a son’s funeral “may be the hardest thing you have to do.”

“[Burke] knew what he was doing — this was no accident,” Jim Piazza, choking on his words, said. “Tim was killed.”

Additionally, Jim Piazza read an email that was sent to him from Judson Horras, a Beta Theta Pi alumnus and president of the North-American Interfraternity Conference. Horras wrote that firm actions of the court could save many other students in the future.

Evelyn Piazza, who spoke next, said her faith is “shattered” and is “not on speaking terms with God.”

A trial has been set for former Beta Theta Pi fraternity brothers charged in the hazing case surrounding the death of Penn State sophomore Timothy Piazza.

“There is a hole in my soul and it hurts every day,” she said. “It took 12 hours to destroy him and destroy my life.”

Masorti, arguing on behalf of his defendants, emphasized the pledges — including Piazza — had freedom of choice as they participated in the drinking obstacle course. He described the alcohol-fueled ritual as a cultural problem, not one solely created by Burke.

“They know what they’re getting into,” Masorti said. “What was going on that night was a celebration and was typical. Beta was a typical fraternity. Penn State and State College is typical college town.”

Prosecutors also argued that if Burke showed true acceptance of responsibility, he would have came forward before now, when offered a plea. In response, Masorti argued that Burke previously had larger charges — like involuntary manslaughter and reckless endangerment of another person — preventing him from coming forward.

The judge agreed. However, Marshall also said “the court was shocked with what happened that night” and gave his condolences to the Piazzas.

Twenty-one former brothers are still facing charges, and a trial has been scheduled for the other members in February 2019.

Joseph Ems Jr. pleaded guilty to several charges on Wednesday in the case surrounding the hazing death of Timothy Piazza.

The Piazza family has been selected for the 2018 Hank Nuwer Anti-Hazing Hero Award.