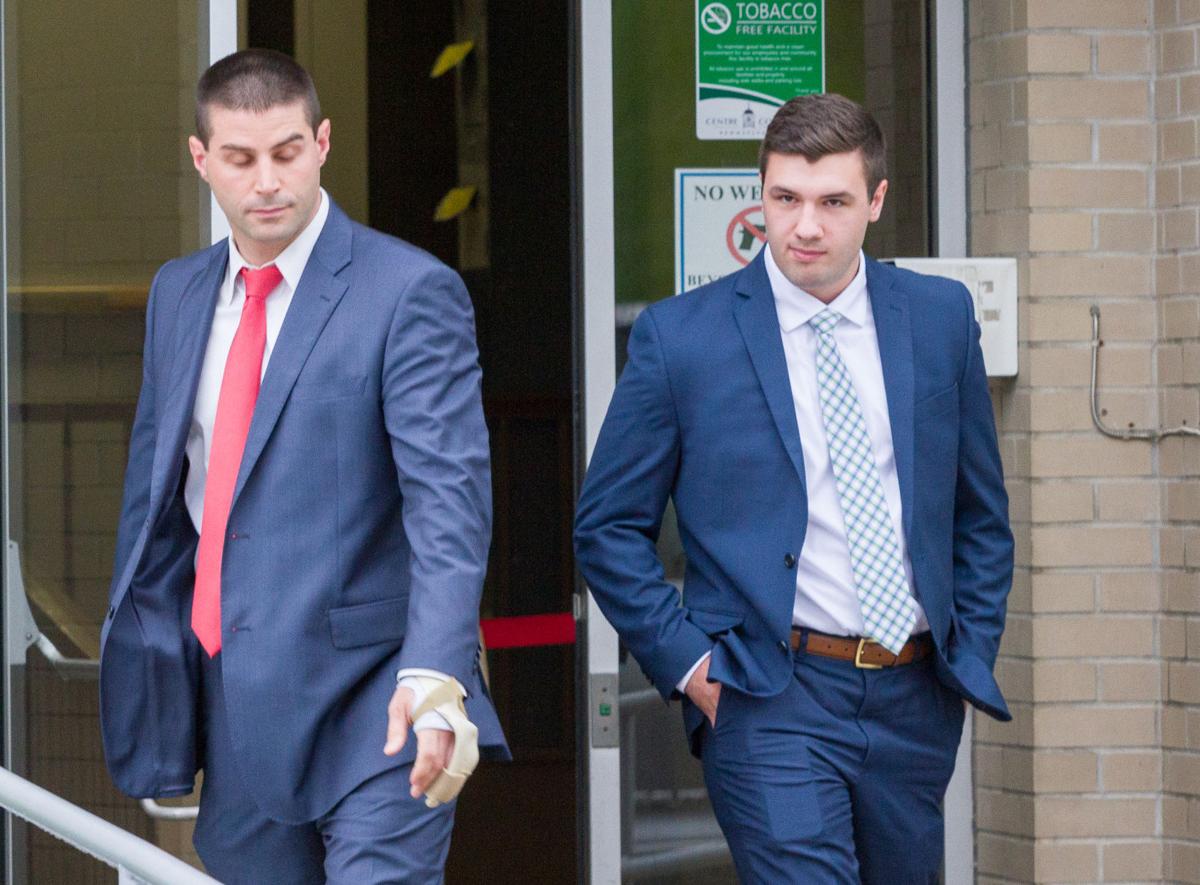 Former Beta Theta Pi Admin Vice President Daniel Casey exits the Centre County Courthouse after conclusion of the arraignment for his role in the death of Tim Piazza on Friday, May 5, 2017. 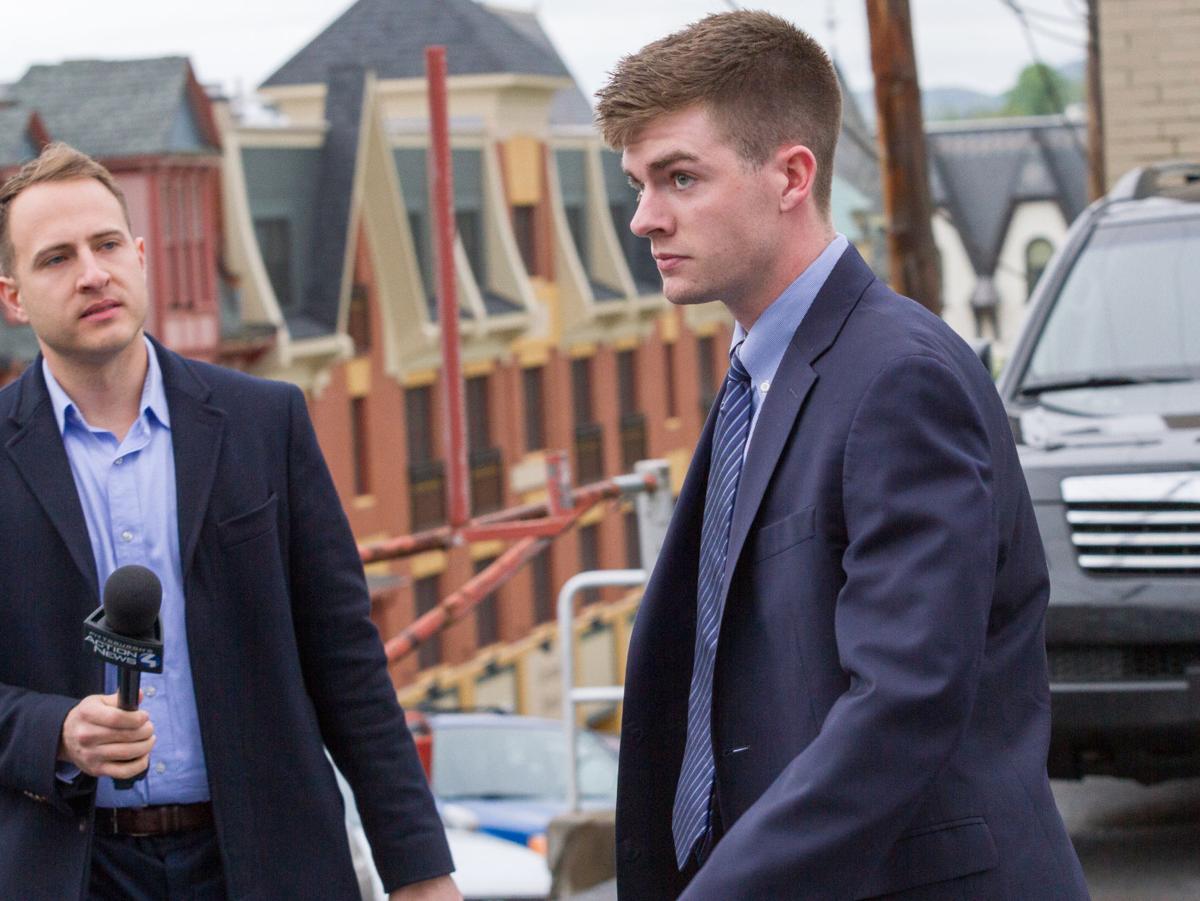 Former Beta Theta Pi Chapter President Brendan Young exits the Centre County Courthouse after conclusion of the arraignment for his role in the death of Tim Piazza on Friday, May 5, 2017. 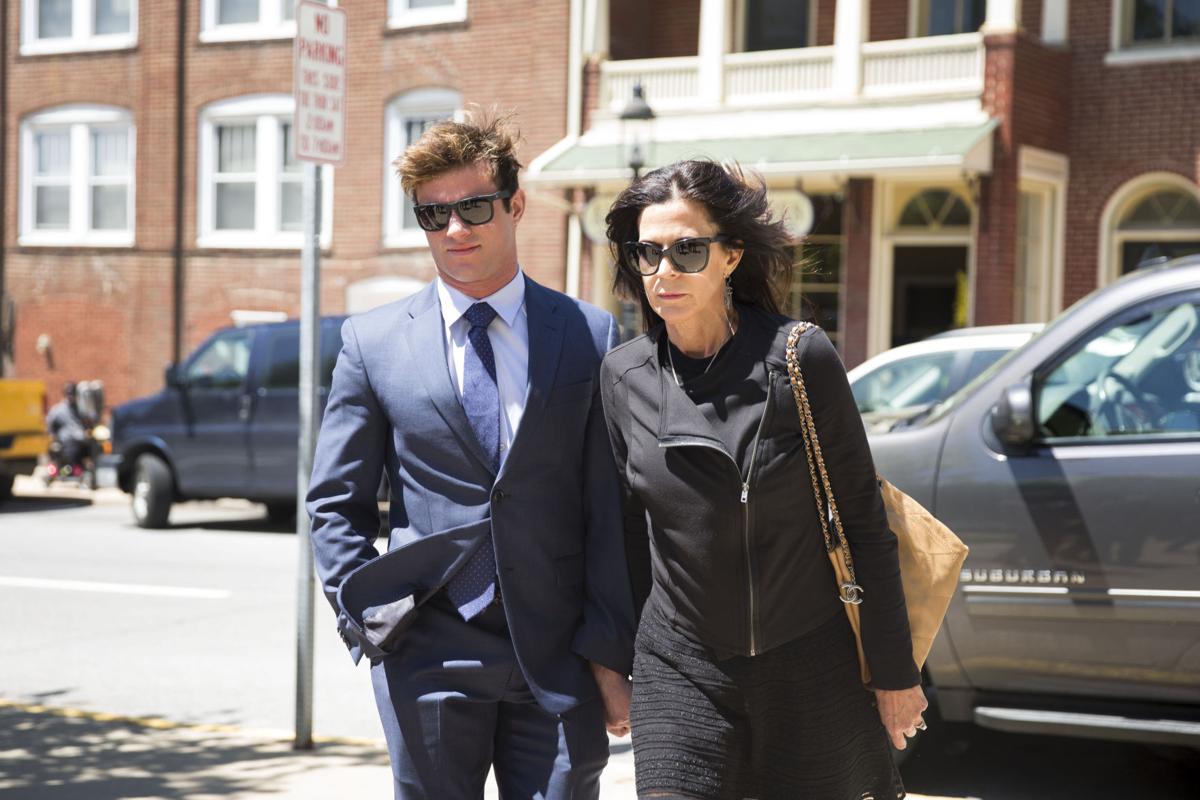 Former Beta Theta Pi brother Michael Angelo Schiavone enters the Centre County Courthouse with his mother for arraignment in Bellefonte, Pennsylvania, on Tuesday, May 9, 2017. Seven other former members of the fraternity were also arraigned on Tuesday. 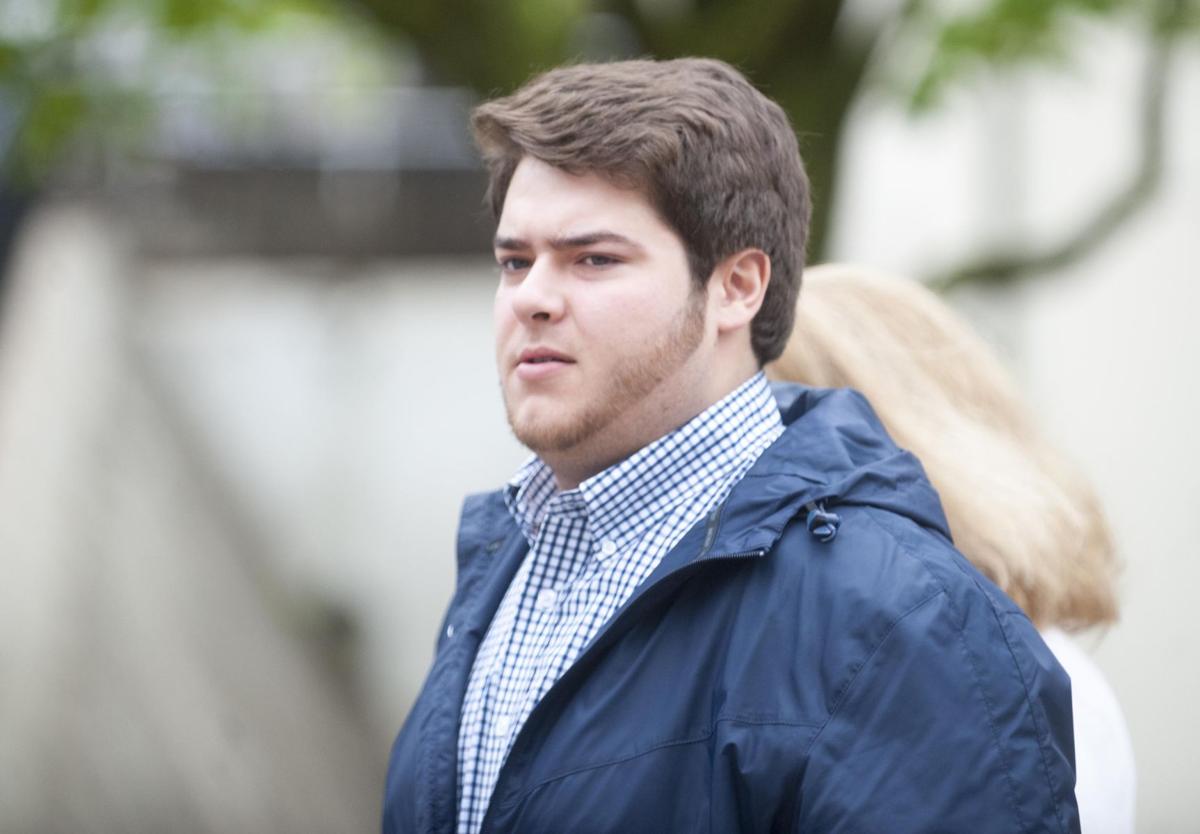 Gary Dibileo, former member of Beta Theta Pi, walks out of the Centre County Courthouse in Bellefonte on Friday, May 5, 2017 after the conclusion of the arraignment for his role the death of Tim Piazza.

During the course of the investigation into the death of student Timothy Piazza, Detective David Scicchitano of the State College Police Department was called to testify before the Grand Jury.

Detective Scicchitano testified that law enforcement also uncovered evidence from a number of fraternity members’ cell phones which revealed conversations concerning the purchase of alcohol for Beta fraternity events. Text messages exchanged between various brothers of the fraternity give indication of ongoing hazing in the fraternity.

These messages were released in the grand jury presentment.

Detective Scicchitano explained that after a forensic examination of Daniel Casey and Brendan Young's phones, he uncovered additional evidence detailing the planning and organization of Beta's bid acceptance night and the “gauntlet,” according to court documents.

Casey served as the administrative vice president in charge of pledge recruitment, and Young as the executive president of the fraternity. Specifically, on February 4, 2016 (exactly one year before Piazza's bid acceptance night) and on March 20, 2016 through March 31, 2016, Young and Casey engaged in the following text message conversations.

Casey: My pledge class loved the obstacle course we thought it was dope

Young: We'll do that. Once we figure where we will have to social, we can figure out the order of the obstacle course.

Casey: Nice sounds good it'll get them fucked up and then they'll go down and have girls there and head to TDX it'll seem lit

Young: What did you guys do for the obstacle course? Floor by floor

Casey: Pull of rouse in PD then run down the hall shotgun go down side steps dizzy bat run to library BP shot then down kitchen steps to basement steps and did wine bag

Young: what was the deal with the beer pong shot?

Casey: Like if you missed a shot you take a shot of rouse? ...I'm not sure I hit it... They just made us drink the cup it was filled with beer ... I say we don't do wine ... And just give them a beer to walk into the social with

Young: Pretty much plus flip cut at the bottom ... Then it'll transition into the social

Casey: My roommate told me that pike does this. During a lineup they introduce everyone from the pledge class the semester before and they run the lineup and that's when the pledge class can start hazing. Thought for next semester since a lot of my pledge class is already involved.

Young: Yeah we can do that next fall with your class and the spring class

Young: Hopefully they aren't soft like this class ... They are really drunk and I want to fuck with them.

Casey: I got you.

Detective Scicchitano testified to forensic evidence harvested from cell phones belonging to both Young and Casey which reveal the planning behind previous "Hell Week" events in 2016.

Regarding the Spring 2016 Rush, police located the following conversations on Young's phone.

Young: They arrive at 10 and do all the tasks I told them to do. Then they go back to their dorms to get a bag for the week. When they come back they do a case race and then a lineup. I'll tell you week long plan when you get here tonight.

Young: I took it easy on them this morning

Casey: Was there pledge fitness? And did you play any music ... And yeah last night was shitty

Young: No pledge fitness. I played music though. Fitness would've been too much ...I've never seen anything as bad as last night at this house

Casey: I know it was insane.

Contact Name: Is there anything for the pledges tn?

Young: Not great. It took them a while to drink it. So I lined them up halfway through and then gave them the chance to drink the rest or go through a lineup.

Casey: So they actually did do it

Young: Where did you get the goldfish for hell week last semester?

Contact Name: Petco or wherever by target can you send a pledge to the 6 it's the last day we would need them

April 23, 2016 (deleted message between Young and another individual):

Casey: Me and Matt are making blood and piss right now ... I'm disappointed in this pledge class

Young: I initiated the pledges on Saturday. They all made it through hell week. Got a lot of positive feedback from the brothers.

Regarding the Fall 2016 bid acceptance, police located the following conversations on Young's phone.

Young: We need to get booze for bid acceptance tomorrow

Schiavone: How much do we need

Young: A lot. When are you free tomorrow? ... A pallet and a bunch of handles

Schiavone: I have to leave for home at like 2pm

Young: Can you get there in the morning?

Young: Good afternoon. This is your pledge master from beta. Please be at the alley in the back of the house by the kitchen doors at 9:17 tonight. Attire is jacket and tie. See you then.

Young: Would Delie have a bat?

Casey: I thought I saw one in his room otherwise I'll go get one

Young: It's not here can you grab one?

Casey: Yeah you think Walmart will have one

Young: We got it...Found it

September 16, 2016 (Collins, first name and association with frat not provide, to Young):

Collins: Shit someone I just met is the sister of your new pledge

Collins: Sounds about par for the course

Suchanec: I'm not gonna paddle but you can hit disko

Becker: MedExpress Urgent Care, TJ MaxxPlaza, 1613 North Atherton Street, State College, PA 16803 ... Tell them last night when it happened it was too late to do anything about, you stopped the bleeding and bandaged it. This morning cleaned it out with hydrogen peroxide and put a small amount of antiseptic and a bandaid on it.

Young: 1613 North Atherton Street, State College, PA 16803 ... Tell them last night when it happened it was too late to do anything about, you stopped the bleeding and bandaged it. This morning cleaned it out with hydrogen peroxide and put a small amount of antiseptic and a bandaid on it.

Miller: How was bid acceptance?

Dibileo: I'm dropping ...I'm sorry I'm never going to be talked to like that

Young: Bad idea ... Talk to me in the morning ... Alcohol creates blurry lines

Dibileo: I promise you I am not drunk enough to make a bad decision. I've been through pledging before and I will never accept being talked to like I was tonight

Young: Don't let one brother's words rattle you ... It's your choice at the end of day. If you can't get over a few words then I can't help you. Good luck.

Dibileo: Sorry about last night. As a junior who already went through pledging I wasn't ok with the way he was talking to me since I never met him before and had no idea he was a brother, especially since all the other brothers I have talked to have been good ass guys to me. Alcohol definitely had a factor and I over reacted.

Young: I'm making a hell week schedule right now. Can I give you a call?

Young: Did you find a puzzle at your house?

November 28, 2016 (Casey to Torrye, first name and association with frat not provided):

Casey: They're starting the puzzle

Schiavone: Can I flip handles/cases to pledges for a premium to get some more social money?

Casey: Beta brew at lO ... Beta brew is over by the way ... We sent the pledges out on a scavenger hunt and they have to be back at midnight

Torrye: Oh wow ... What did they have to get

Casey: Pictures with buildings at Penn state named after betas

Casey: I'm in class what's up

Ems: Do we have any hazing events going on tonight

Casey: Pretty sure there's a lineup

Torrye: When is the line up

Torrye: Wait how was beta brew

Casey: They actually killed it

Torrye: What's the meeting about

Casey: They're playing crab soccer for like an hour

Torrye: How was your line up

Torrye: No one was crazy?

Casey: Just being a dick... Like doing too much ... We were setting up

Casey: Like the shep test and the fake branding

Casey: I in charge of administering the shep test

November 30, 2016 (Fernandez, first name and association with frat not provided, to Young):

Fernandez: Can we move the line up back so guys can come from the bars?

Fernandez: When will it be pushed back until

Fernandez: Word ...I'm on my way I got this line up no worries.

Young: Can you buy booze for initiation tomorrow?

Schiavone: Absolutely. What do you need

Schiavone: The usual? ... And champagne obv? Are we not getting 29 bottles of champagne? Why 15?

Young: All of those fucks don't deserve a bottle to themselves ... Save up for formal

Schiavone: Okay ... How many cases and handles

Young: Up to you.

Miller: Take it out on the pledges

Young: Whip the dick out?

Miller: If ever there was a time for an elephant walk it would be tn

Miller: Really? Sounds great to me

Young: You want in?

Miller: Yeah def count me in.

Young: I'm burnt out from hazing.

Nugget: yo this kid is in our room

Young: Is he passed out?

Nugget: I need to go to bed. I think hes fine but he has a bad cut and hes puking

Nugget: I could drive him back

Young: Not worth it...Let him sleep.

Casey: It starting ... We having them wait in the boiler room after the shep test until we set up paddling

Torrye: Did you do the branding already

Torrye: How many questions is it

Suschanec: I'm not gonna paddle but you can hit disko

Unknown: Considering I broke will Peters' skin the last time I paddled someone, I'm gunna sit this one out for Rizzo's sake. I'm also completely swamped and was just in a two hour long meeting so you can smack his fat ass for me since no one else is in my family line.

Casey: Paddling is over by the way.