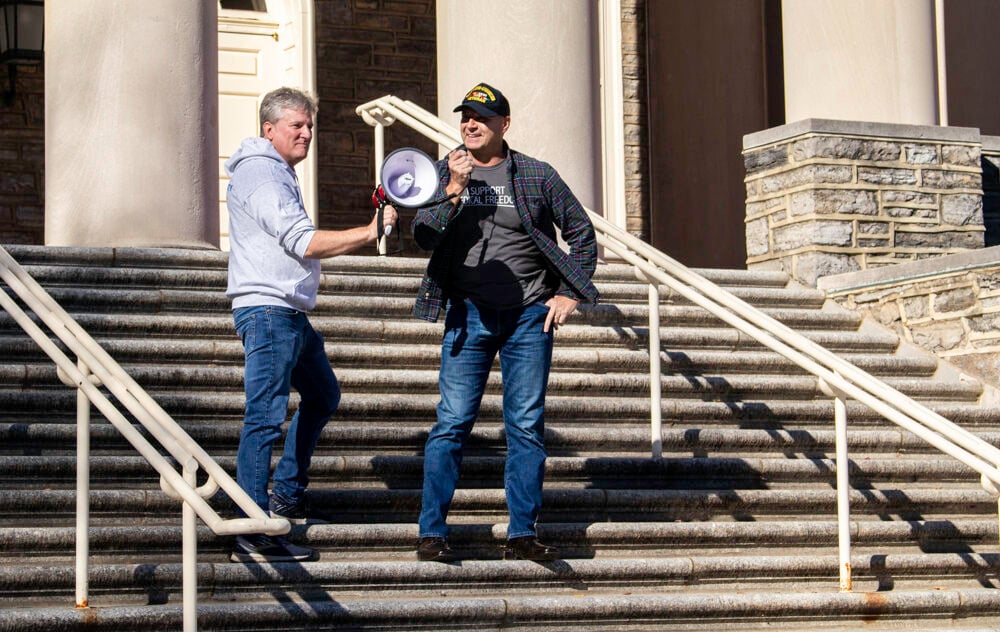 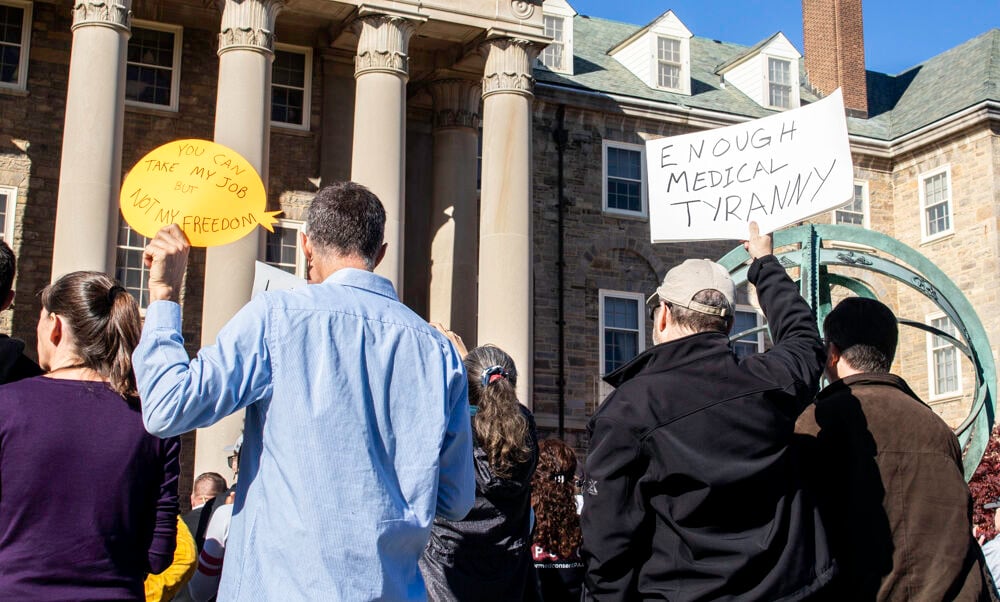 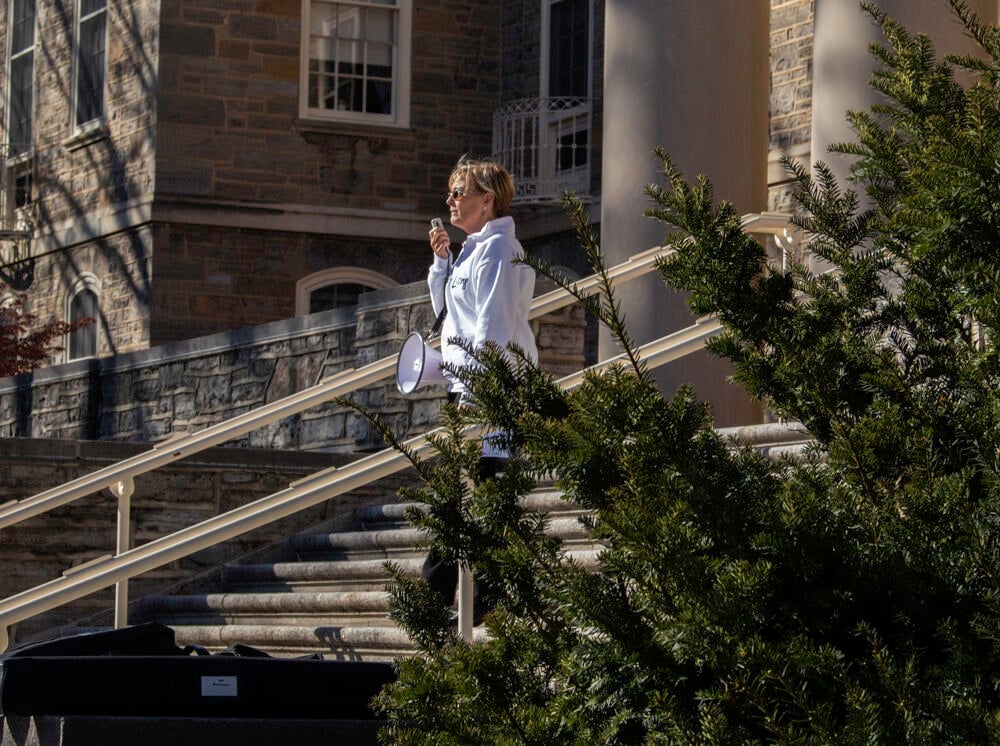 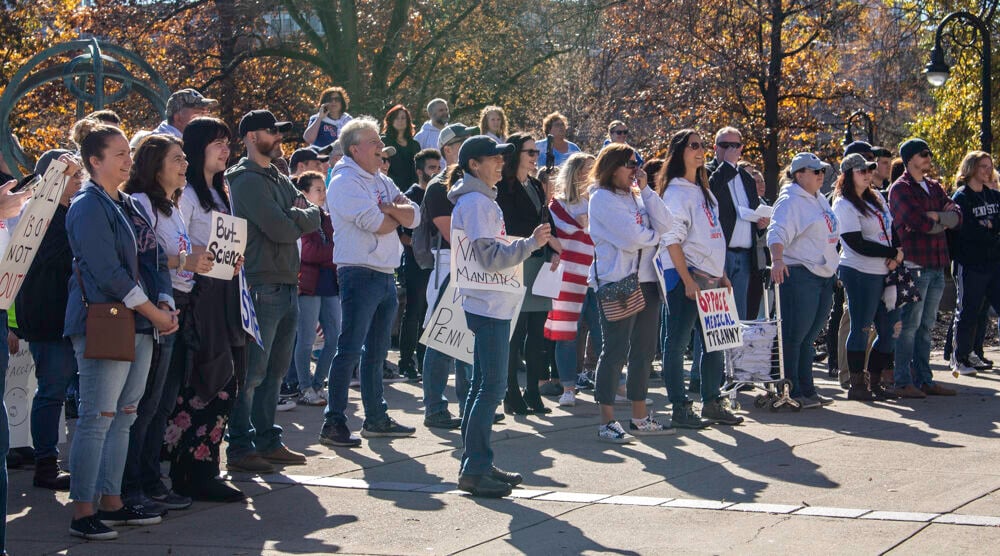 Video by Will Rosenblatt | The Daily Collegian

The rally was held in response to an October vaccine mandate for university employees which required them to upload proof of coronavirus vaccination by Dec. 8.

As of Friday, the university extended the deadline for upload to Jan. 4, 2022.

The rally had about 200 people in attendance, with six guest speakers, including State Senator Doug Mastriano and Pennsylvania State Representative Stephanie Borowicz.

Tracey Stroup, a naturopathic doctor and Penn State graduate 24 years ago, said she believes “our medical system has always been a system of repression.”

“We need a new way of health care … without coercion,” Stroup said.

Stroup compared the current vaccine mandates to the origins of the “We Are” chant, and discussed the roots of the chant, during her speech at the event.

Stroup said she believes those who attended the event represent “the new 1946 [football] team.”

“You are Penn State, not some government body,” Stroup said. “You can choose what is good for your body, which is the temple of the Holy Spirit."

Antonio Benedetti, vice president of Turning Point USA at Penn State and another speaker at the event, said he believes vaccine mandates don’t have to be “a left versus right issue.”

Additionally, Benedetti (senior-political science) said he is not anti-vaccine, but against vaccine mandates. He said he believes in “the right to choose what we put in our bodies,” and the people at the rally “have the right to stand up for what they believe in.”

“Our founding father had a vision for this country, if you can’t follow that vision, then it’s not my problem to adjust to your vision. I’m living mine,” Benedetti said.

Then, Benedetti said he believes there is “partiality” among some of the faculty at Penn State, and said it’s “troubling” to see faculty “voicing opposition to freedom of expression.”

Another speaker Kevin McKenna, president for Turning Point USA at Penn State, said vaccine mandates are an issue he and his members “are incredibly passionate about.”

McKenna (junior-finance) said he also believes no one should be “forced between choosing to keep their job or placed on leave.”

Then, McKenna said he believes medical decisions should be made by “an individual and his or her doctor, not by a governing body like the university — not by any employer.”

McKenna said he sees how the vaccinated “demonize” the unvaccinated, which “doesn’t make sense” to him.

Inspired by the release of a new book titled “The Ethics of Policing: New Perspectives on La…

State of State will host student and faculty speakers to discuss the sexual misconduct culture at Penn State, among other topics, for its inau…

During the first week of September, Penn State student Lucy Farmen noticed her belongings began to be covered in mold under her bed in Holmes …