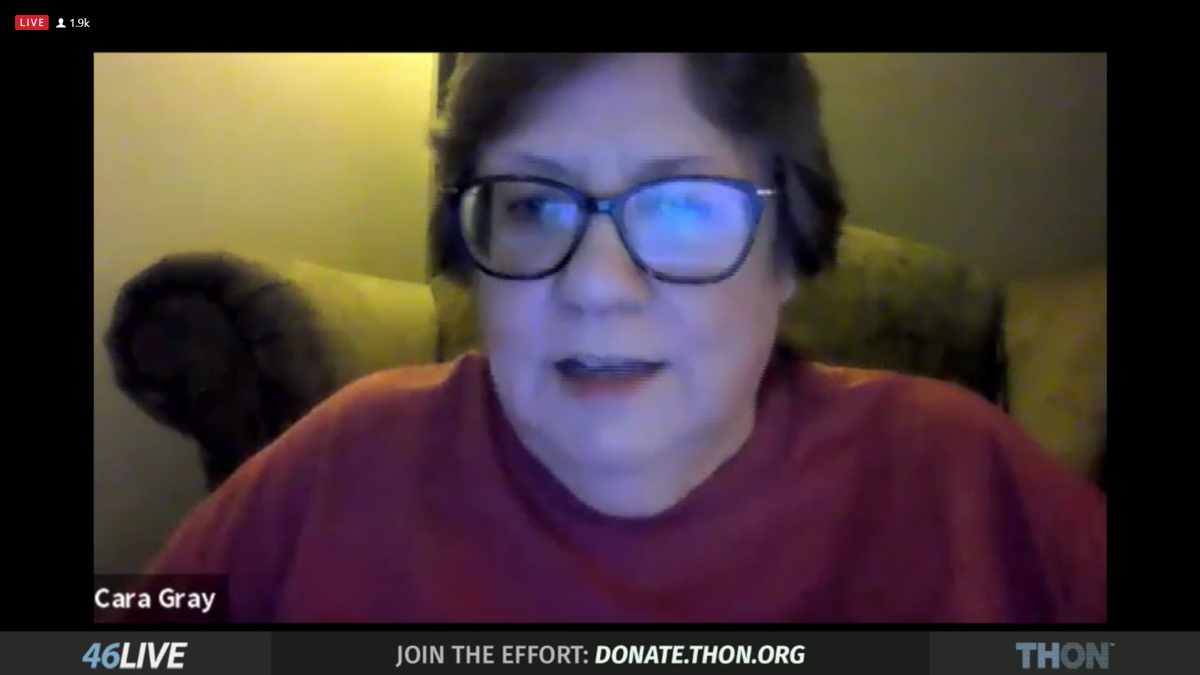 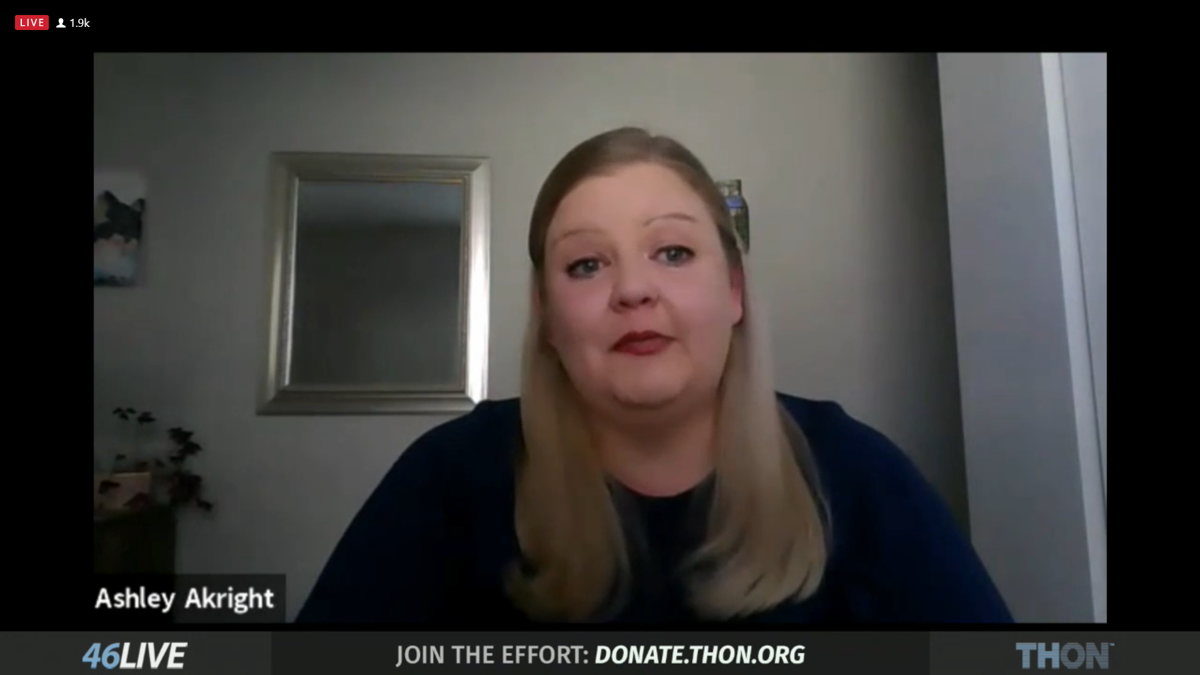 Ashley Akright, sister of the late Nickolas Akright, helped share her brother's story alongside her mother via Zoom on THON 2021's livestream on Feb. 21, 2021. 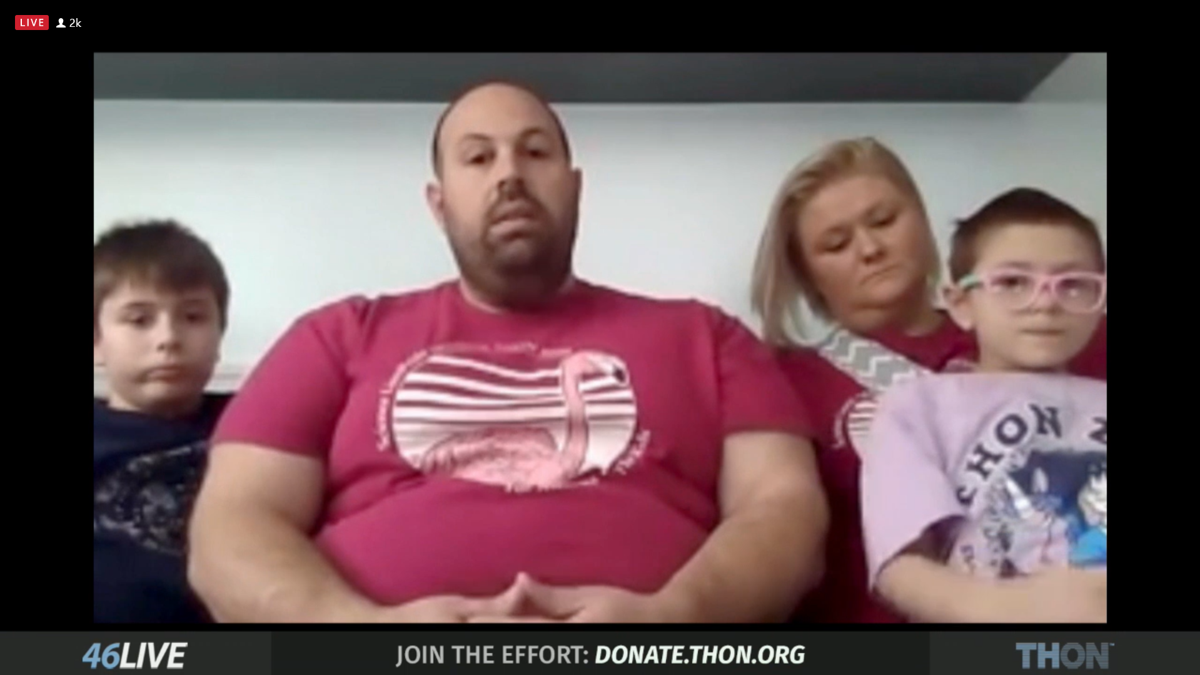 The Makenna Linder Family shared Makenna's story of her battle with cancer on the THON 2021 livestream on Feb. 21, 2021.

THON’s Final Four kicked off with a virtual Family Hour this year, in which Four Diamonds families and their children shared video messages and stories of their battles with pediatric cancer.

The compilation also featured pictures and videos of past THON children and their families.

The hour featured dozens of mini stories from THON children and their families, interspersed with three longer, personal family stories.

The first two stories — those of the Hailey Dougherty family and the Makenna Linder — spoke of current treatments and survival. The final story — that of Nickolas Akright — spoke of Akright’s death by suicide following treatment.

Each family discussed what motivates them to keep fighting, and the help that Four Diamonds and THON have given them along the way.

Here are their stories.

Hailey Dougherty was at a sporting practice last February when she began to feel exhausted and even more tired than she had felt at practice before.

With only five minutes left in their workout, her mother, Heather Dougherty, who was also a coach, told Hailey to keep going, but Hailey couldn’t and sat down.

Worried, the family had routine blood work done at the Hershey Medical Center.

Hailey’s tests came back, and a carcinogen was detected in her blood — she had cancer and would require treatment immediately.

The ER kept Hailey in the hospital overnight and began a series of tests and chemical treatments.

For the fifth year in a row, special interest organization Ayuda has a sign in the Bryce Jor…

Six days in, however, Hailey had a seizure, which Heather said was a result of an anaphylactic reaction Hailey had to the treatments.

A few days later, after some more tests, Haily was diagnosed with acute lymphocytic leukemia, a common childhood blood cancer that affects white blood cell development. The disease greatly inhibits the immune systems of those it affects.

While at the medical center, some students involved in THON came to visit Hailey and let her know that Four Diamonds and THON were there to help.

Following the visit, Four Diamonds quickly got in contact with the Dougherty family.

“They definitely made her feel welcome and a part of something this year when she is so isolated and away from everything else,” Heather said. “You could tell they really thought about the kids and made sure to get the kids something they would love.”

Nearly a year later, Haily is in maintenance and remission, but is still receiving chemotherapy treatments, which have strong side effects, according to Heather.

However, Hailey’s blood counts are where they should be and she’s “doing amazing” with her treatment, Heather said.

Heather said she was even able to take Hailey out for dinner at a restaurant last week.

“I left the house with something not related to my sickness,” Hailey said.

Heather’s advice to other Four Diamonds and THON families is to accept any and all of the organization’s help. She said the family no longer has any copayments or medical bills because of the aid they received.

“Four Diamonds has been absolutely amazing and THON has been incredible,” Heather said. “Every little bit helps and makes a difference in this fight.”

Hailey told other children in her position to be themselves and remember their individuality.

“Don’t try to fit in, because you will fit in no matter what.”

When she was 6 years old, Makenna Linder and her family got a call from the Hershey Medical Center that she had to come in for scans.

Afterward, doctors told her family that she had cancer.

Right away the next morning, they performed surgery for a Wilms’ tumor, a rare kidney cancer that could easily rupture. The eight-hour surgery was a success, and chemotherapy followed shortly afterward.

Twenty months after her surgery during a routine check-up, Makenna’s family was told that she again had cancer in her bladder cancer. She underwent 42 more weeks of chemotherapy and 28 rounds of proton therapy. She has been undergoing more treatments during the pandemic.

The family has been going back and forth from home and to hospitals in Philadelphia and Hershey. The family said Makenna’s doctors have been “fantastic” and have become their “friends and family.”

Makenna is the THON child of Science LionPride, ambassadors to the Eberly College of Science. The family was gone bowling, out to dinner and more with the organization.

“THON has been fantastic because if it wasn’t for all of you guys, we would not have any support,” Makenna’s father said. “Makenna has taken this like a champ and it has been quite the journey.”

Makenna’s parents gave some advice to other families going through cancer.

“Prayer is a big thing and don’t be afraid to ask for help if you need it,” they said. “Community has been there to help us through this journey. Within the storm, there is a shining light, too.”

To his family, the story of Nickolas Akright revolves around a bunch of pieces of chocolates.

Thirty years ago, Nickolas’ mother, Cara wondered “how a connection between college students and sick children would work” as her son was one of the first THON children paired with a student organization. She shortly figured out through the story of her son.

Nickolas had acute lymphoblastic leukemia and was treated for it for four years of his early life.

He was eventually cured of cancer; however, he was not free from the side effects that were left behind.

During high school, Nickolas had mental health issues. He planned on going to Penn State, a place where he spent many years participating as the THON child of Phi Gamma Nu.

However, Nickolas never attended Penn State as he died by suicide before his high school graduation.

After Nickolas’ death, his sister Ashley Akright knew she had to carry on her brother’s legacy, and planned to attend Penn State.

Ashley was excited when she was accepted to University Park.

“Good thing I got in,” she said. “Because there was no other option.”

Ashley went on to join the organization that her brother was once cared for by— Phi Gamma Nu. Her senior year, she became the president and communications captain of Phi Gamma Nu.

During her time at Penn State, Ashley traveled to Hershey to collect bags of chocolates. She would go into the classrooms at Penn State and place a Hershey Kiss at the corner of the desks as a remembrance of the connection Nickolas had with THON.

THON meant a lot to the Akright family, as they said it gave Nickolas an escape from his mental health issues that he faced due to the effects of cancer.

For the Akright family, THON is not just an event or a location — it is the people that make up the event.

THON 2021 Collection | Live updates, coverage, what you need to know from virtual THON

THON may be a different format in 2021, but The Daily Collegian is bringing the same collection of live updates and coverage you need to know …

Jeremiah Hassel is a lifestyle editor at The Daily Collegian. He is a junior studying digital and print journalism and political science with a minor in French.

Sarah Pellis is a downtown and campus blogger and columnist for The Daily Collegian. She is a sophomore studying digital and print journalism.

Spencer Ripchik is a men's lacrosse reporter at The Daily Collegian. He is a freshman studying journalism with a minor in sports studies