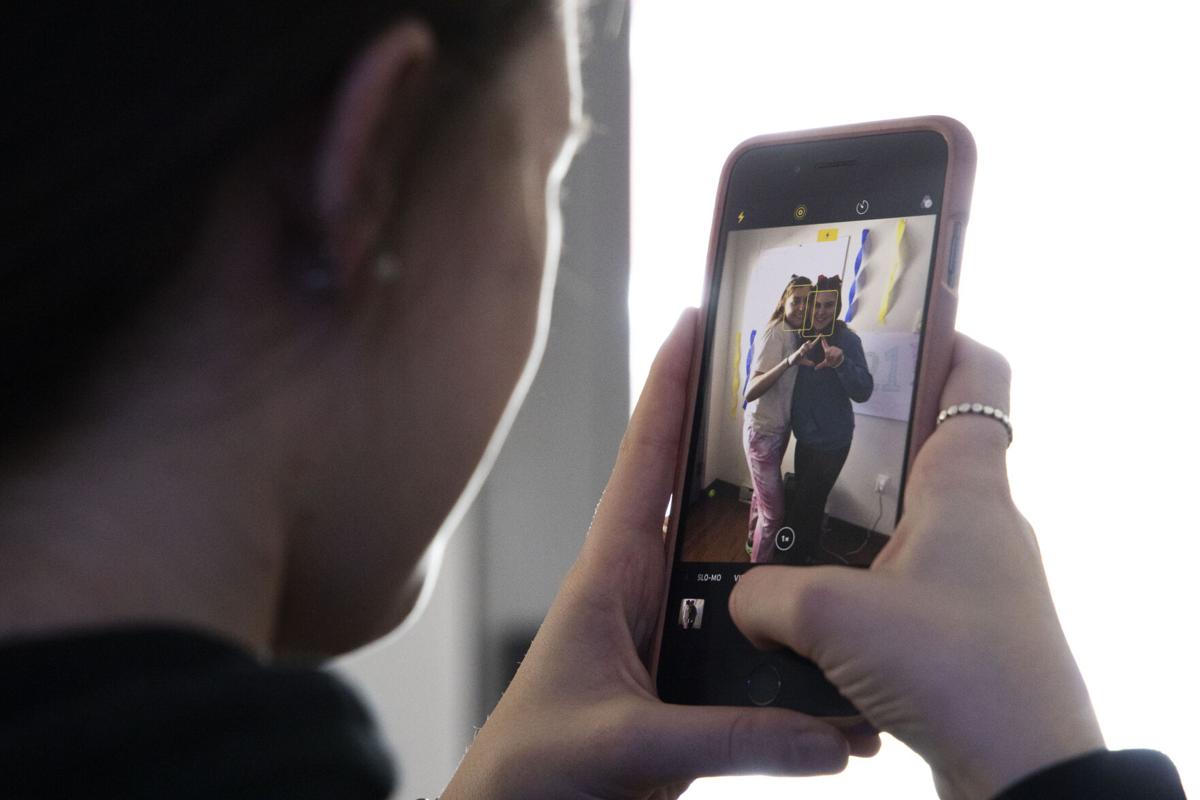 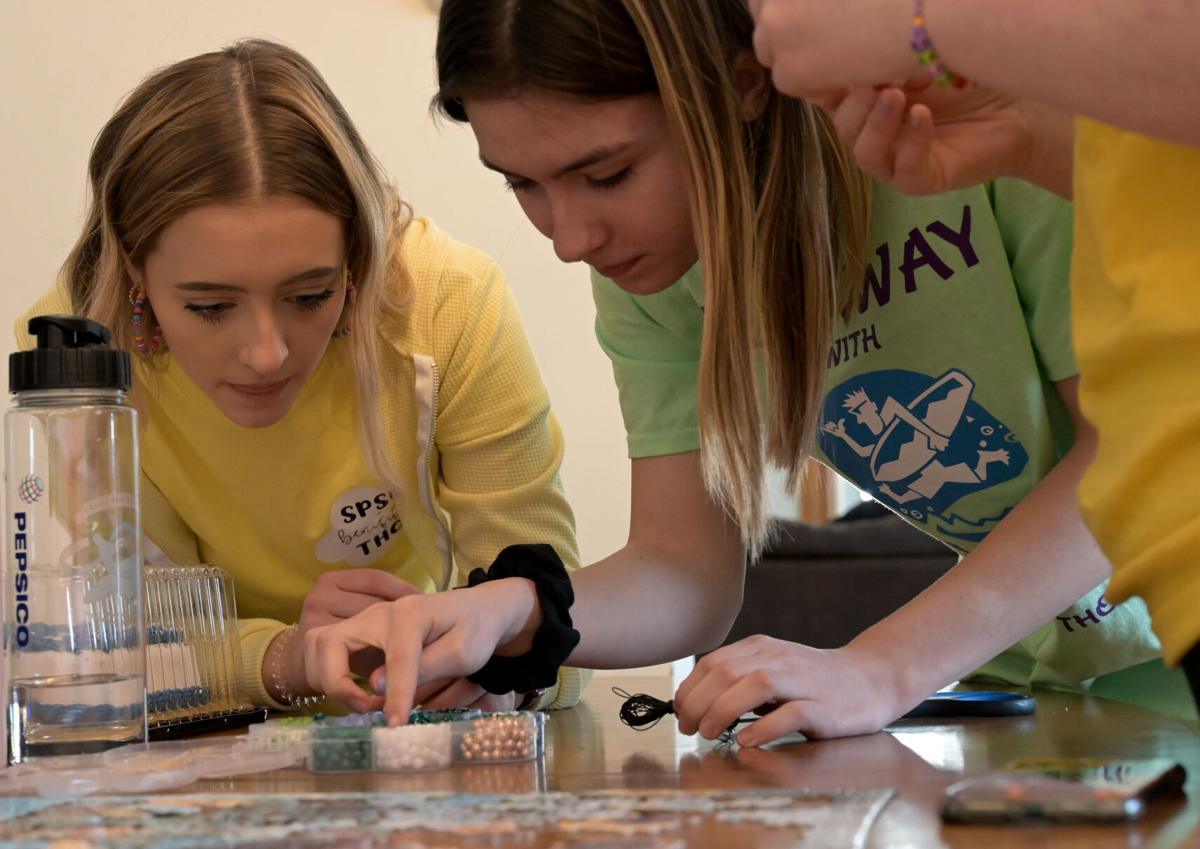 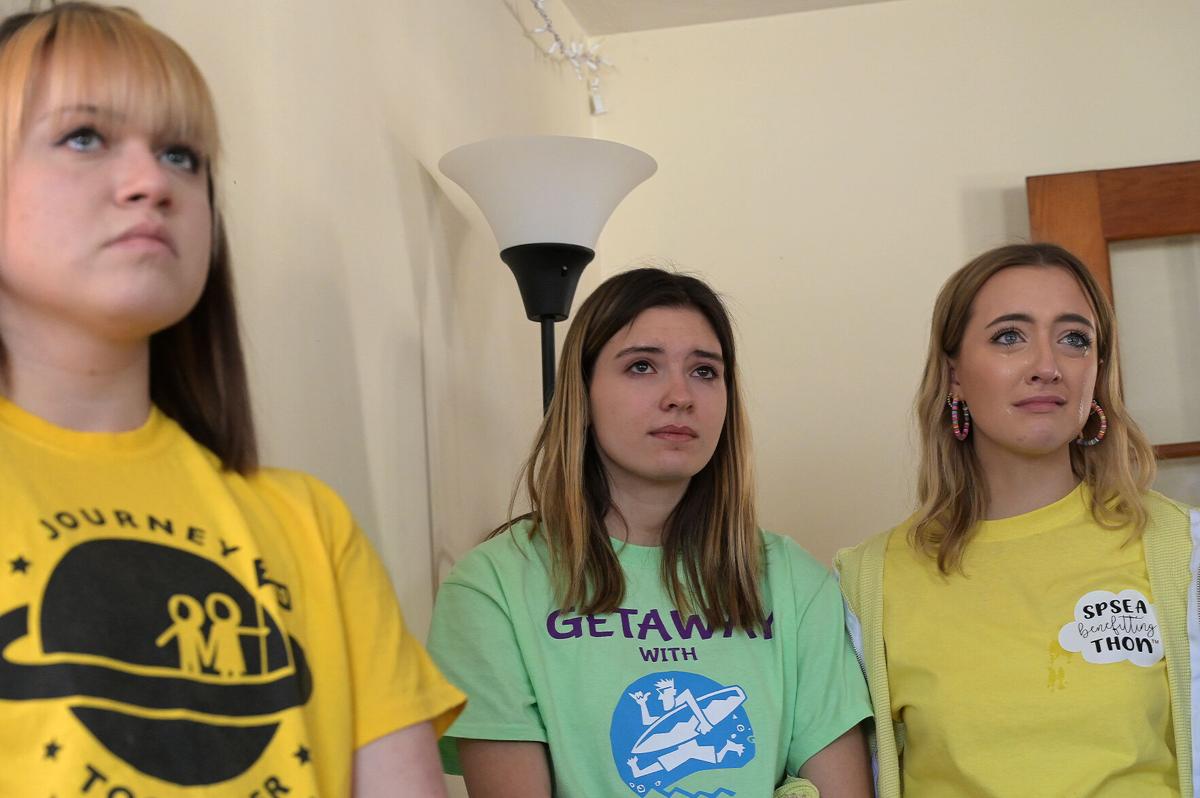 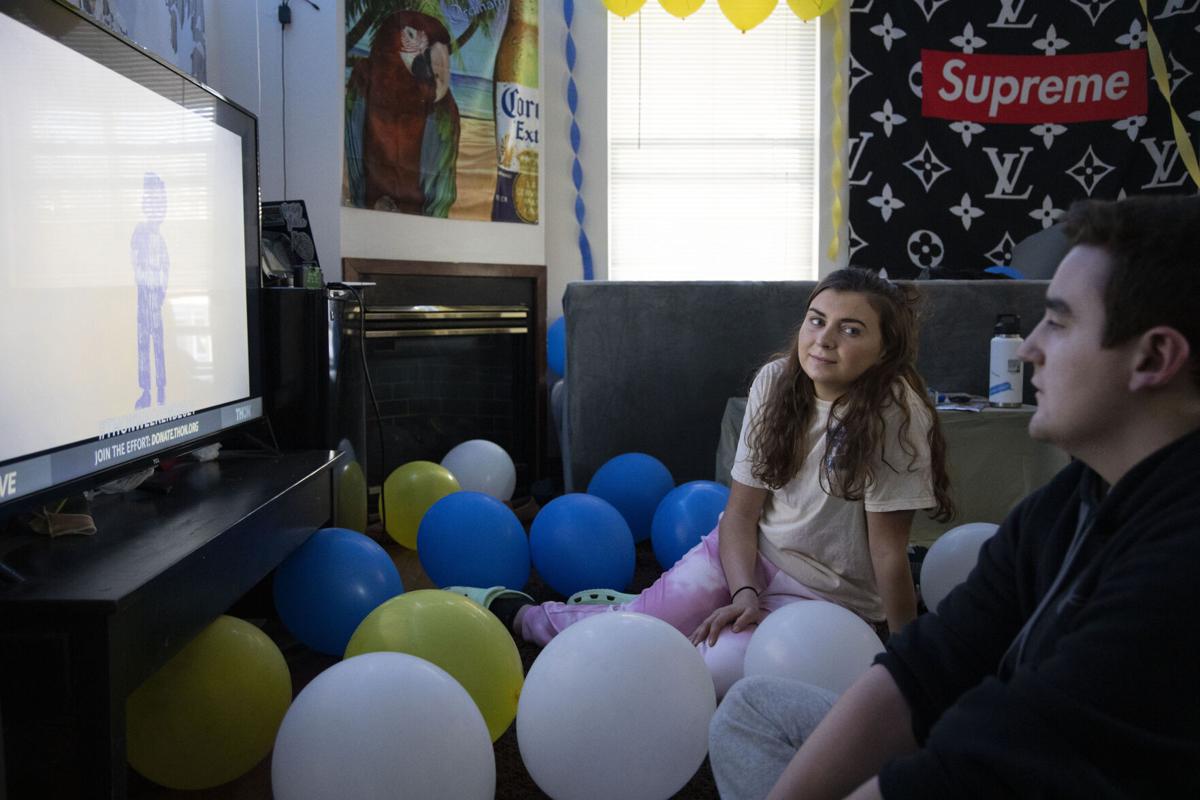 Penn State Global Brigades dancer Lyndsay Stakem (junior-biobehavioural health) watches the THON livestream at the end of THON with her friends from her apartment on Sunday, Feb. 21, 2021 in State College, Pa.

In an unprecedented move by Penn State and Four Diamonds authorities, THON was shifted to a virtual format this year due to rising public health concerns from the coronavirus pandemic.

THON dancers and attendees were no longer allowed inside the Bryce Jordan Center, and performers and dance captains had limited access to the main stage. Proceedings were broadcasted by 46 Live on THON’s website.

Despite THON 2021 being Dhanesh Ranaweera’s senior THON, the four-year OPPerations Committee member said he was relatively unphased by the virtual shift.

“I think they did their best for what it was,” Ranaweera (senior-chemical engineering) said. “I know the captains worked very hard to establish a great THON weekend, and I think it went perfectly.”

Bobby McLuckey agreed with Ranaweera, and said the livestream was a useful aspect to THON because participants and viewers could tune in from anywhere at any time.

“I was disappointed that it wasn’t in person, but I’m still glad that it happened,” McLuckey (freshman-biobehavioral health) said. “I think they did the best they could do.”

For Shirin Ismayil, the THON livestream almost felt as if she was in person at the BJC. Ismayil (sophomore-biology and psychology) said the event being in real time was “much nicer than a recording.”

However, several of THON’s committees struggled with the shift to an online format, according to Ranaweera.

OPP is usually in charge of setting up and tearing down THON decorations and the main stage in the BJC, Ranaweera said, with each member working three or four shifts throughout the weekend.

This year, though, the committee simply held scheduled Zoom activities to watch the livestream and participate in THON proceedings.

Jacob Davidson, another OPP committee member, echoed Ranaweera and said the virtual format of the event rendered OPP’s job useless. There was nothing to set up or tear down, so OPP had little to no purpose, according to Davidison (freshman-computer science).

Freshmen participating in committees for the first time were also at a disadvantage, according to freshmen Chaelan Stier and Kimberly Sundy.

“It was sad this year — being our first year on committees — that we weren’t able to do all that stuff in person,” Stier (freshman-kinesiology) said.

Sundy (freshman-biobehavioral health) said she found it harder to work with her communications committee, referring to the social struggles of working through Zoom.

Despite the difficulties with a virtual THON, some students — like Joseph Cardina — believe the decision to go remote was for the best.

“It’s what had to be done,” Cardina (sophomore-premedicine) said. “The health of everyone participating at THON is the top priority.”

Sundy said she and her committee still “bonded pretty well” despite the challenges of Zoom, which Stier agreed with.

“I think the committees did a good job trying to get us to know each other through Zoom this year even though we couldn’t be in person together,” Stier said.

For Davidson, working as an OPP committee member allowed him to branch out and meet new friends.

“Freshmen are so welcome in the committee,” Davidson said. “It’s a great thing to be a part of.”

The committees were also able to turn the struggles presented by their exclusively online communications into fundraising inspiration, according to Ranaweera.

“We decided as a committee to go all in for fundraising,” Ranaweera said, “and we created so many great new ideas that raised a lot of money.”

Stier said her committee had the same level of success, brainstorming fundraising ideas for when THON returns to its usual in-person format.

“I think it helped for the future because we’ll be able to fundraise in person,” Stier said. “But also, there are those options online, especially for the people [who] are far away.”

Ranaweera said he’s hopeful for the future of THON fundraising — both in his committee and in others.

“The fundraising aspect has expanded to levels it was never at before,” Ranaweera said. “If they take those ideas and apply [them] to future years, the sky is the limit for fundraising.”

The decline did not matter for many students, however.

“$10 million is still $10 million more than we had, so I think it’s still awesome,” Cardina said.

Ranaweera said he believes THON participants should be proud of the total raised.

“Any amount of money raised is good,” Ranaweera said. “The total at the end is just a reflection of the hard work people put in every year. I don’t think years should be compared because every cent raised toward the Four Diamonds fund is money earned to help kids.”

Davidson, however, expressed disappointment in this year’s total.

“Most of THON was virtual, and the organizations couldn’t do much with it,” Davidson said. “Everyone was solely focused on fundraising, and I thought that was going to play a bigger factor in the total.”

Elizabeth Klapac said advertisement and communications issues were detrimental to both THON’s fundraising levels and its overall participation levels this year.

Klapac (freshman-nursing) said she didn’t even hear about when THON would be held until the week of.

Davidson echoed these sentiments and said he only heard about THON and its schedule because he was an OPP committee member.

Although developments in the fight against coronavirus are still occurring, Davidson and Klapac said they’re hopeful THON will be held in person again next year.

For Davidson, the livestream was difficult to watch because it “wasn’t engaging,” and didn’t keep his attention throughout the weekend.

Klapac said the virtual nature of the event limited the number of donations the organization received.

Despite some setbacks of the virtual nature, Klapac said there were still positives from the weekend.

“THON is much more than just being at the BJC. People still made it work, and we still raised a lot of money.”

THON 2021 total revealed | How it compares to past years

In a typical year, thousands would cram into the Bryce Jordan Center at around 4 p.m. on the…

This weekend, Penn State seniors held their breath for the last time as students as they waited for the THON total reveal.

Jeremiah Hassel is a lifestyle editor at The Daily Collegian. He is a junior studying digital and print journalism and political science with a minor in French.