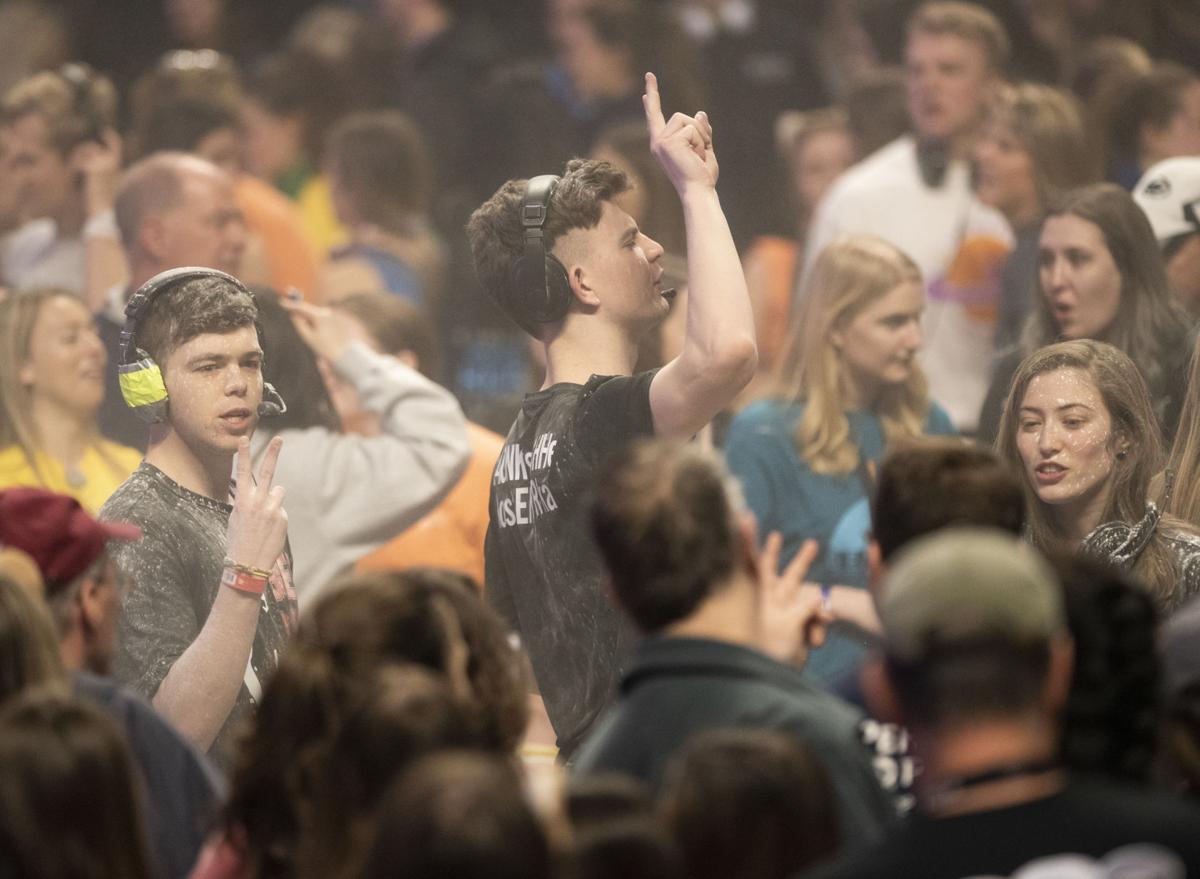 OPPerations committee members count down during Giant Slides of Strength during Penn State THON at the Bryce Jordan Center on Sunday, Feb. 23, 2020. 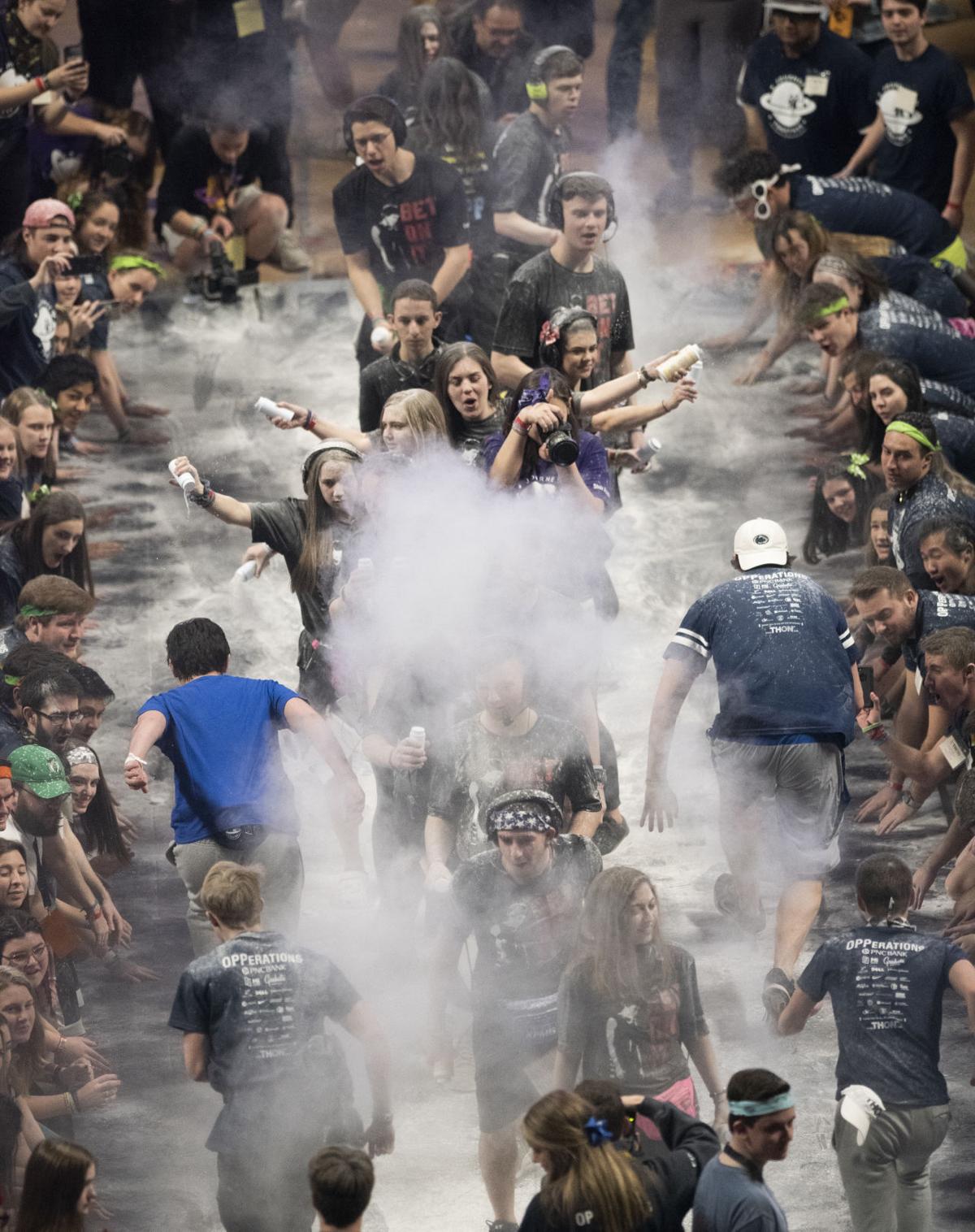 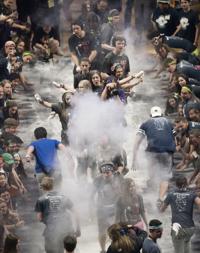 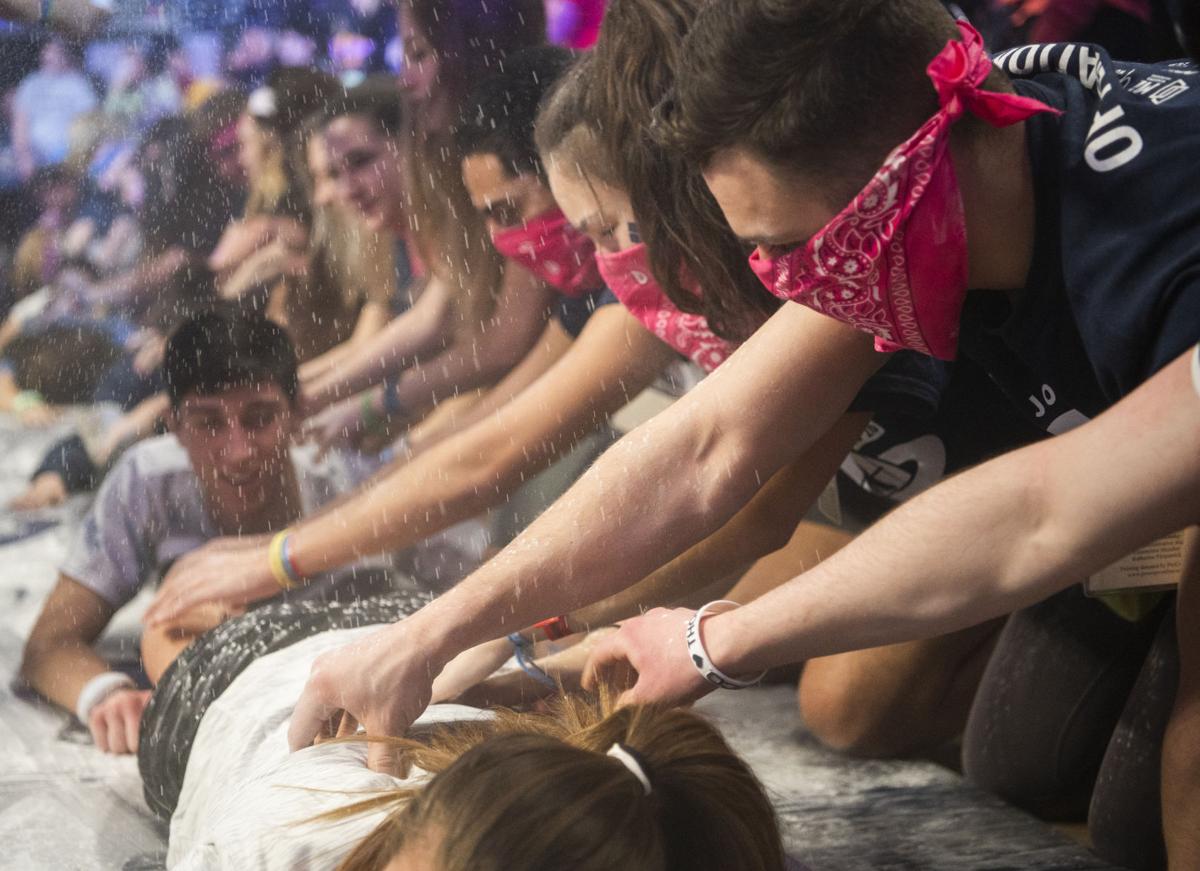 Dancers go through Slides of Strength during Penn State THON at the Bryce Jordan Center on Sunday, Feb. 23, 2020.

Every year, the first people to arrive at the Bryce Jordan Center for THON and the last ones to leave aren’t the dancers: It's the members of OPPerations.

Frank Incarnato joined the committee, which is primarily responsible for the setup and teardown of the BJC, as a freshman. His sister was a senior at the time, and her good friend was an OPP captain.

Incarnato (junior-mechanical engineering) has climbed the ladder to become a captain and said OPP is an unparalleled experience on campus.

“You form bonds with other people that I don’t think I’ve ever felt in another extracurricular before,” Incarnato said.

But as with every other event transformed by the coronavirus pandemic, THON has faced a titanic shift as well.

Instead of arriving at 5 a.m. on the Friday of THON and leaving the university’s basketball arena at midnight on Sunday, OPP has seen a significantly reduced role.

With no dancers on site, no mats have spread across the Jordan Center’s floor. The group that prides itself on being the first ones in and the last ones out won’t be able to live up to its mantra Sunday night.

“[OPP] really isn’t a part of it to the same degree,” Incarnato said. “There [are] no mats to tear down, the south annex is not really being used, so we’re kind of uninvolved from a setup and teardown perspective this year.”

Like Incarnato, Hannah Thornton is also an OPP Captain. Thornton (senior-art education) joined the committee after transferring to Penn State midway through her freshman year.

While OPP has been a huge part of her social experience at University Park, she said it’s been “harder” to connect with committee members, especially because captains like herself have spent little time together as a group this year.

“It’s tough for me to be positive every day, especially when we first found out that it was going to be a livestream,” Thornton said. “It was definitely a little bit difficult to swallow that pill and make the most of it.”

In years prior, OPP filled the role of restocking toilet paper and taking out the trash. It’s with OPP that Thornton said she has found some of her best friends and formed special bonds.

Engaged in much of the grunt work of THON, Thornton said there’s more to the experience than emptying out a garbage can.

“A lot of fun is found in work that you wouldn’t think is fun,” Thornton said.

But in light of the pandemic, a significantly reduced number of OPP members have been called upon to help out at the BJC. Rather than both Incarnato and Thornton guiding the way as captains, the duo picked a much smaller number of individuals for assistance.

Not only is the decreased number in accordance with reduced responsibilities, but it is safer for everyone at the BJC to not have as many OPP committee members meandering the floor.

Thornton said like everyone at THON, workers are staying socially distanced and masked at all times while sanitizing any surfaces they come in contact with.

Incarnato went to the BJC to fill in for a co-captain earlier Saturday, and he saw the environment Thornton said has been safe for volunteers and Four Diamond families alike.

“It was really weird because I’m so used to it being so loud and busy and crazy,” Incarnato said. “It was just silent and empty and weird.”

Even though 2021’s THON hasn’t been the same for OPP’s pair of setup and teardown captains, both Thornton and Incarnato will be at the Bryce Jordan Center Sunday.

With greatly reduced team sizes, 10 senior captains will be at the arena following the completion of THON to help with the transition to setting up the basketball court for the Lady Lions’ game on Wednesday.

But the lack of the intricacies of a normal THON have not been lost on Incarnato, and he’ll be perfectly aware of them Sunday afternoon.

“It is really difficult to emulate 16,000 people in the arena with everybody else doing the line dance in perfect sync and crying together,” Incarnato said.

Incarnato said typically, OPP committee members arrive at the BJC early Friday morning excited to get started. Once the final total gets announced and teardown is right around the corner, everyone gets “so excited” to try and beat the record of the fastest operations committee.

The former did not take place in its usual capacity and the latter has been reduced to 10 seniors. OPP did not avoid the perils and challenges wrought by a pandemic that has negatively affected so many lives.

Even so, Incarnato said he feels a responsibility as a captain to lay the groundwork for the future as captains have done for him in years past.

“Making those friends and having those captains who have influenced me so much, I want to be that for somebody else,” Incarnato said. “I just want to be as involved as I can be.”

For Incarnato, OPP is more than another THON committee.

“OPP is known colloquially as the big blue family. That’s not an exaggeration. You really do feel like you’re in a family on a very intimate level.”

Despite the hope for a return to normalcy for THON 2022, there are certain aspects of virtual THON that dancers and organizers would like to s…

For the fifth year in a row, special interest organization Ayuda has a sign in the Bryce Jordan Center to honor former member Timothy Piazza.

THON 2021 Collection | Live updates, coverage, what you need to know from virtual THON

THON may be a different format in 2021, but The Daily Collegian is bringing the same collection of live updates and coverage you need to know …