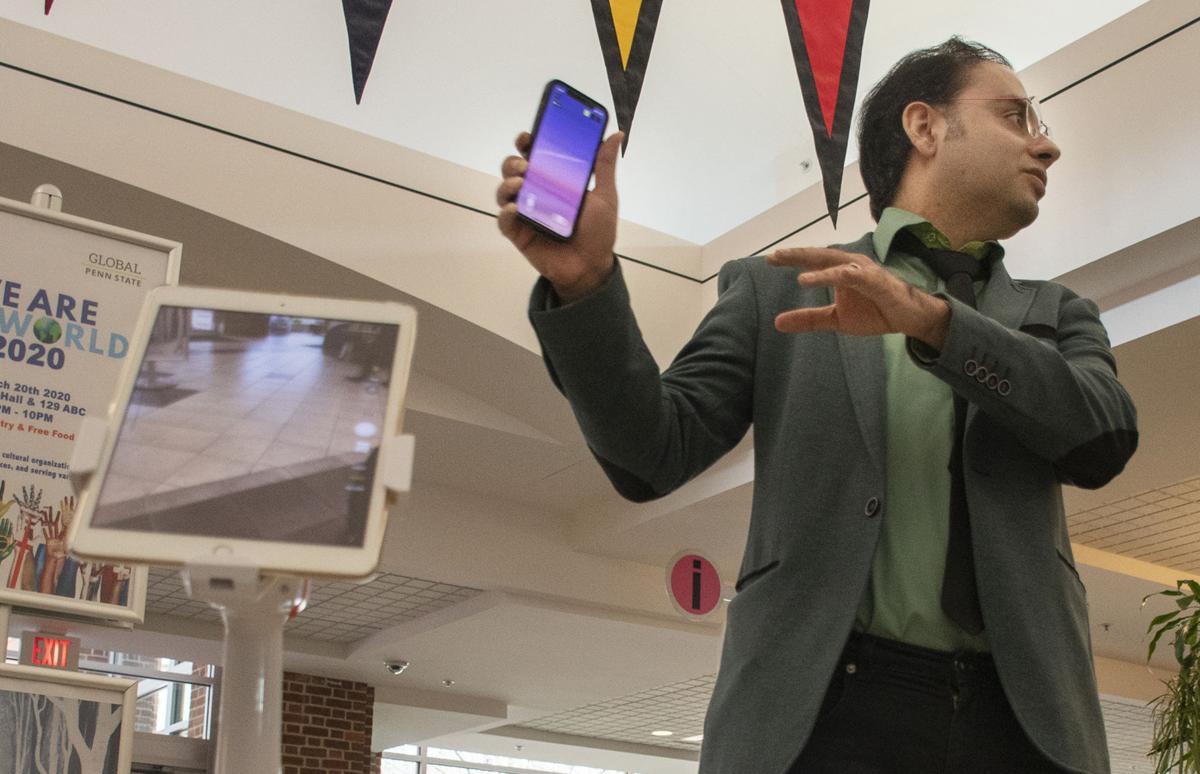 Amin Davoodi, a Texas A&M doctoral student doing research at Penn State poses with his robot "Keebot" in HUB-Robeson Center on Wednesday 4, 2020. The robot is meant to help students who are unable to attend class in person attend virtually. 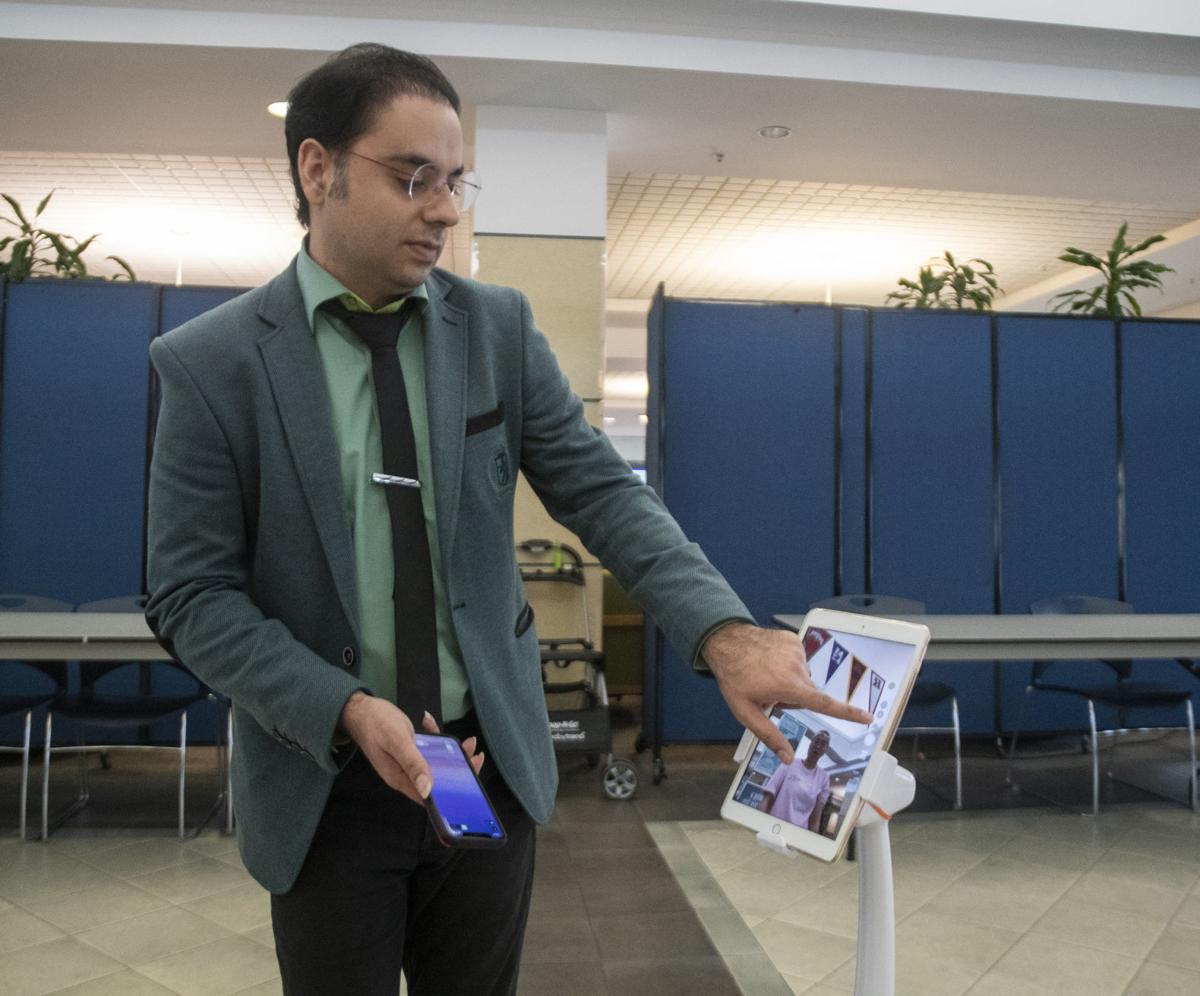 Amin Davoodi, a Texas A&M doctoral student doing research at Penn State, operates his robot "Keebot" Wednesday, March 4, 2020 in the HUB-Robeson Center. The robot is meant to help students who are unable to attend class in person attend virtually.

Although all current Penn State students are now faced with the task of online learning, there are some students who have to handle this challenge for a longer period of time due to serious illnesses such as cancer.

Having been a teacher for almost a decade, Texas A&M Ph.D. student Amin Davoodi wanted to help students like this attend class virtually despite the difficulties preventing them from physically being there.

Davoodi, a graduate student studying curriculum and instruction, came to Penn State at the start of the fall semester in order to pursue research that would accomplish the goal of helping homebound students attend their classes.

“When students [get cancer] in a K-12 or university setting, because of the treatment, being in the hospital and then the recovery, sometimes they miss a whole year,” Davoodi said. “I’ve always thought about how I can help these students, because as a teacher, the last thing I want to see is that one of my kids can’t come to class.”

Wishing to combine his interest in teaching and technology, Davoodi’s research went about this goal through the use of a telepresence robot.

This robot has a tablet attached to it, as well as wheels on the bottom so it can move and pivot for full view of the user’s surroundings. By connecting to the tablet’s microphone and camera features, the user is able to hear and see what is going on wherever the robot is located.

The user is also able to control the movements of the robot with their own electronic device through an app that is downloaded on both the user’s device and the robot’s tablet. This ability to move the robot provides the “telepresence” capabilities, meaning that it gives the user a feeling of actually being where the robot is.

Davoodi said he came to Penn State to fulfill the goals of his dissertation because of the university’s reputation in the field of research, as well as its proximity to the Mount Nittany Medical Center.

When looking for a homebound student to try out the telepresence robot technology, Davoodi contacted the Cancer Care Partnership located at the Lance and Ellen Shaner Pavilion — which is attached to the back of Mount Nittany.

Here, he got in touch with the Cancer Care Partnership’s practice manager Marsha Winslow, who connected Davoodi with a Penn State senior undergoing cancer treatment.

Winslow, who is also a registered nurse at the partnership, said Davoodi contacted them at the perfect time to help this particular student, especially considering her goals to follow through with her prospective graduation in May 2020.

“I was worried because I knew she didn’t want to miss any classes during treatment,” Winslow said. “It was great timing on his part.”

Davoodi said he was grateful for Winslow’s and the partnership’s willingness to connect with him and assist him throughout his research.

“The Lance and Ellen Shaner Cancer Care Partnership at Mount Nittany couldn’t have been more cooperative, and it’s not very easy to build a relationship between a researcher and a hospital,” he said. “I was very lucky both to come here, and cooperate with Penn State and the Mount Nittany Hospital.”

After making initial contact, Davoodi then met with the student and her parents before starting the research. From here, he connected the student with the telepresence technology and showed her how to operate it from her device.

Because he was working with a college student, Davoodi said he had to transport the robot to each of the student’s classes, which was accomplished by the use of his 8-month-old daughter’s stroller.

For the first few uses, Davoodi said he kept a close watch on the robot to make sure it was functioning properly and giving the student full virtual access to the classroom. After this, however, the robot was fully functional on its own.

Before Davoodi could utilize this technology in the student’s classes, however, all of her professors and classmates had to consent to having the robot present. Davoodi said he is grateful both the professors and students were more than willing to comply and support the student.

Davoodi also said the student’s classmates were excited to be a part of the project.

“A couple of them told me they thought they wouldn’t be able to help, but if agreeing to have her virtually in class was something they could do, they would be really happy to do it,” he said.

Penn State English professor Matthew Tierney — who taught the English 487 class the student took during the time of her treatment — said it was an “obvious yes” to allow the telepresence technology in the classroom.

Tierney added that although some technological solutions in today’s society end up introducing more problems than positive results, Davoodi’s research has done the opposite for this student.

“What I see in Davoodi's project isn't a vain effort to find a permanent computational fix for all problems of accessibility at once,” Tierney said via email. “What I see instead is a very specific solution to a very specific problem — a versatile method for temporary digital co-presence where disability or illness has impeded bodily co-presence — and I think it's entirely marvelous.”

The pigs next door: Penn State students get opportunity to live, work on swine farm

After completing freshman year, it is customary for students to continue living in a dorm or…

Tierney said he did not find the technology to be a distraction, either to himself or his students. Rather, it allowed him and the rest of the class to interact with the student during her time away from campus.

With the student having completed treatment and returned to campus in February, Davoodi said she is currently on track to accomplish her goal of graduating in May.

With the first portion of his research complete, Davoodi said he is in the process of wrapping up the information he gathered from working with the Penn State student. He is also beginning the pilot portion of the next step in his research.

In this next step, Davoodi said he wants to use the telepresence robot technology to help people with disabilities.

According to Davoodi, psychological research has proven that individuals with disabilities are more likely to suffer from depression because of issues that may inhibit them from regularly leaving their homes.

For this reason, he wanted to use this technology to provide individuals with disabilities a means of social interaction without leaving their homes.

Wishing to make use of his experience in teaching English, Davoodi also intends to give immigrants with disabilities the opportunity to try this technology. He said giving them the ability to practice English with other people from the comfort of their home would help them adjust to the language in a more convenient fashion.

“The number one challenge that immigrants — especially disabled immigrants — have when trying to get a job is that they don’t speak English well,” Davoodi said. “This [technology] can help them to get a chance to interact with people so that they can improve their English and hopefully work on their self-confidence to get out, work and contribute to our society.”

Davoodi hopes to spread awareness for the practicality of this technology to policy makers and federal funding agencies.

In addition to making these officials more aware of the technology, Davoodi said he would also like to show more teachers and places of education how telepresence robots could be of use to them and their students.

In the future, Davoodi said he hopes to see a few of these robots at more schools and universities across the globe.

Winslow said she would also like to see this technology utilized more often, specifically in the world of education.

“I think it’s a great opportunity for kids and young adults in school who don’t want to put things on hold,” Winslow said. “It’s a positive thing, and students undergoing treatment could really benefit from it.”