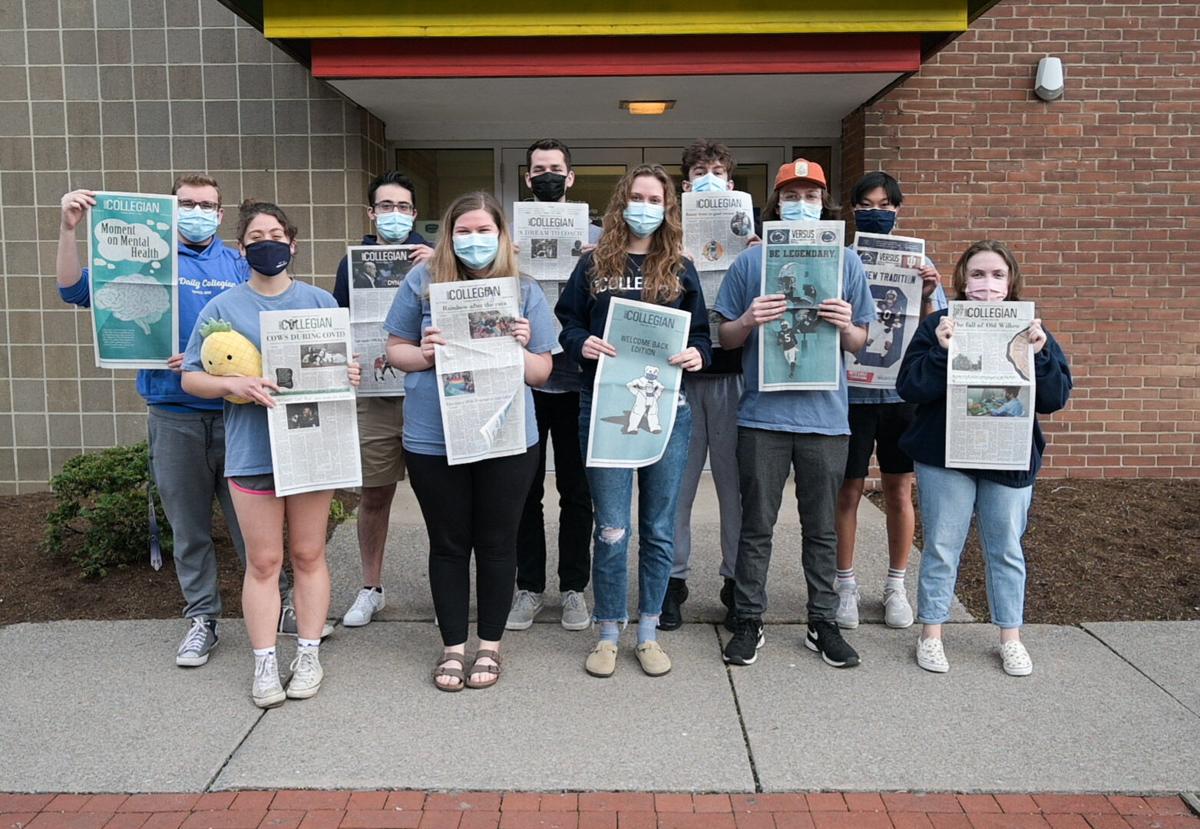 Members of the Collegian's 2020-21 Board of Editors pose for a photo outside The Daily Collegian office at 112 W. Foster Ave. 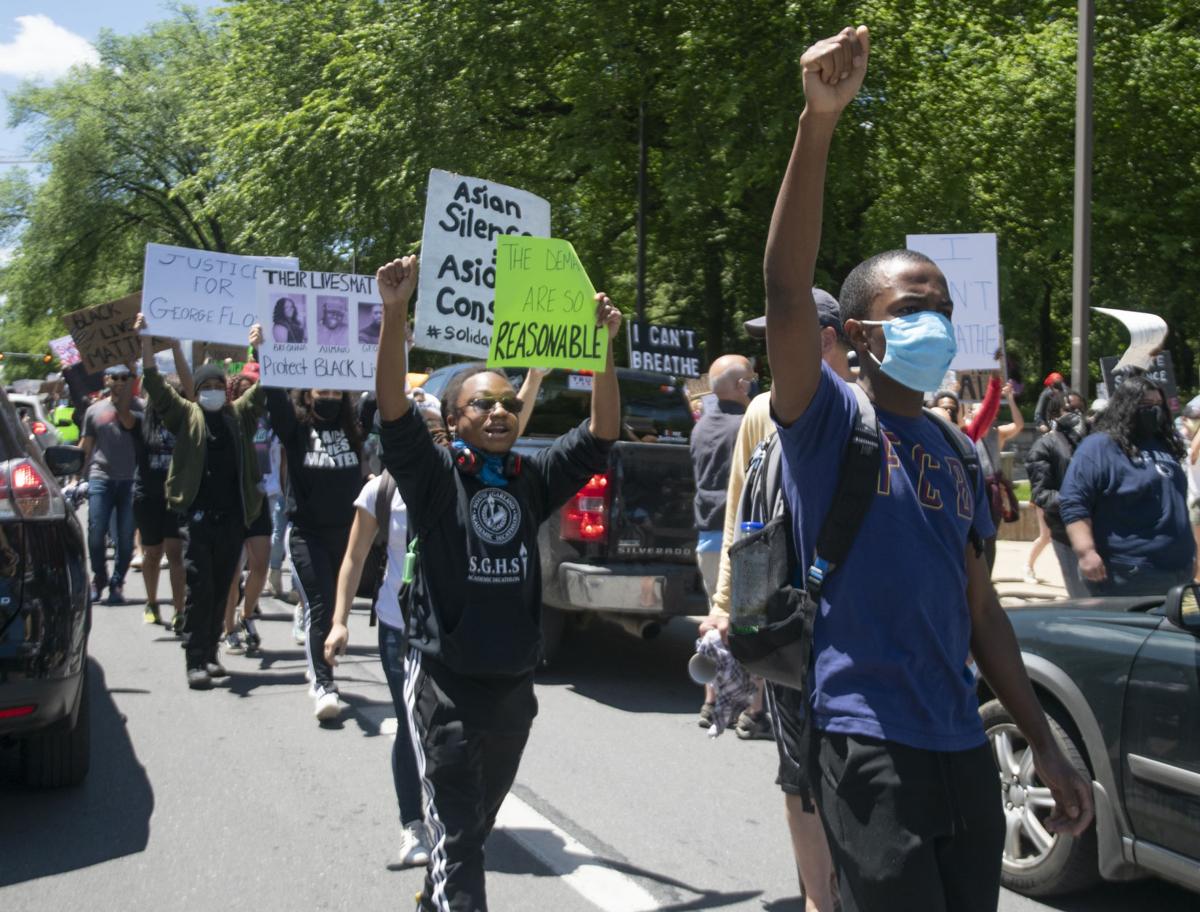 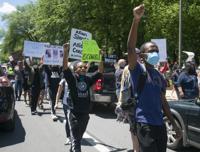 Protesters march through traffic on College Avenue during a Black Lives Matter protest in honor of George Floyd Sunday, May 31, 2020. Protests took place nationwide after Floyd was killed by a police officer on May 25 in Minneapolis. 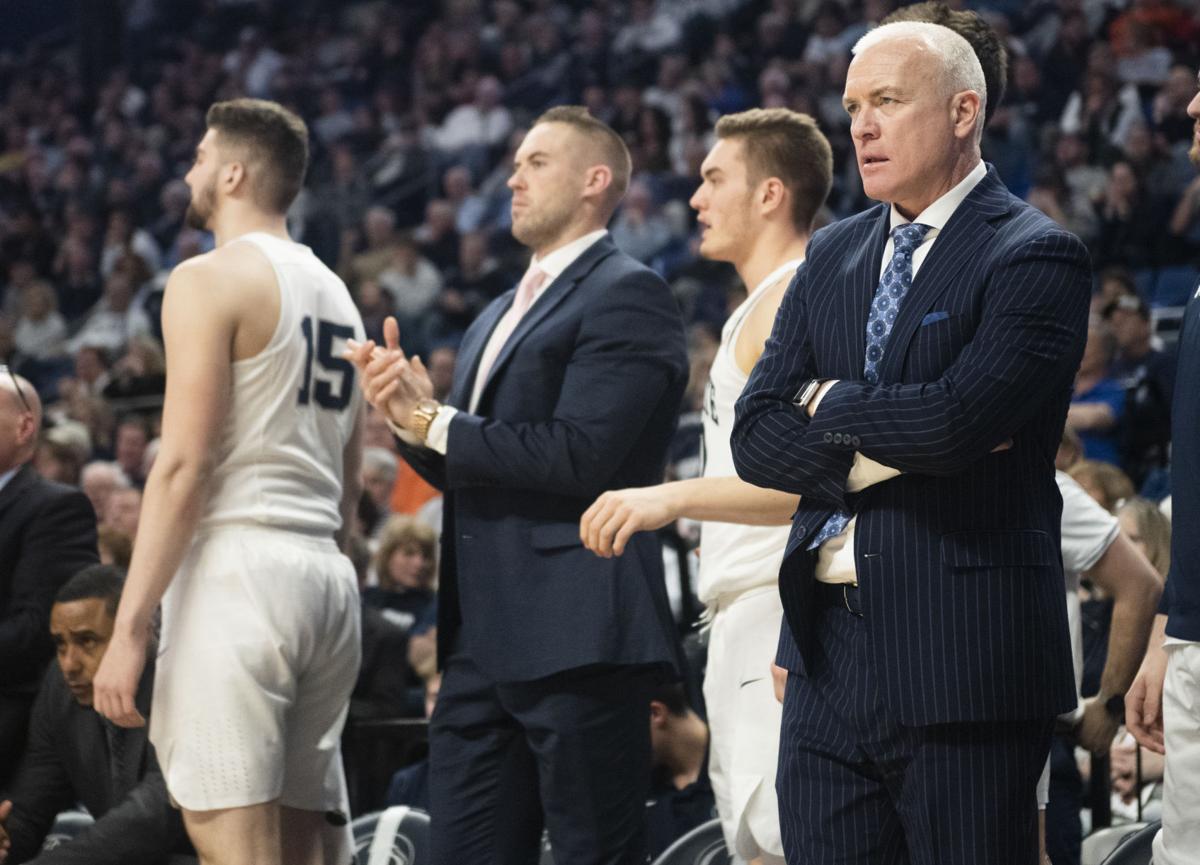 Head coach Pat Chambers stands on the sidelines during the game against Illinois at the Bryce Jordan Center on Tuesday, Feb. 18, 2020. Penn State was defeated by the Fighting Illini 62-56. 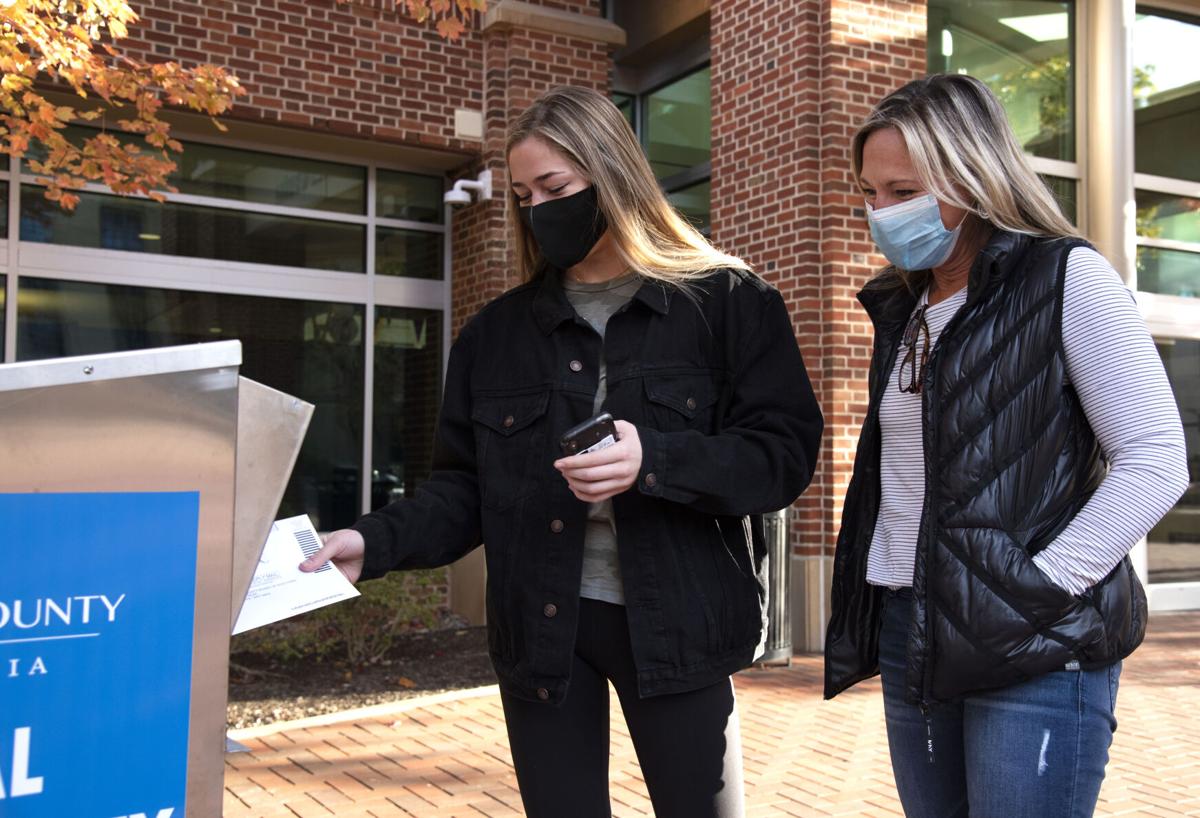 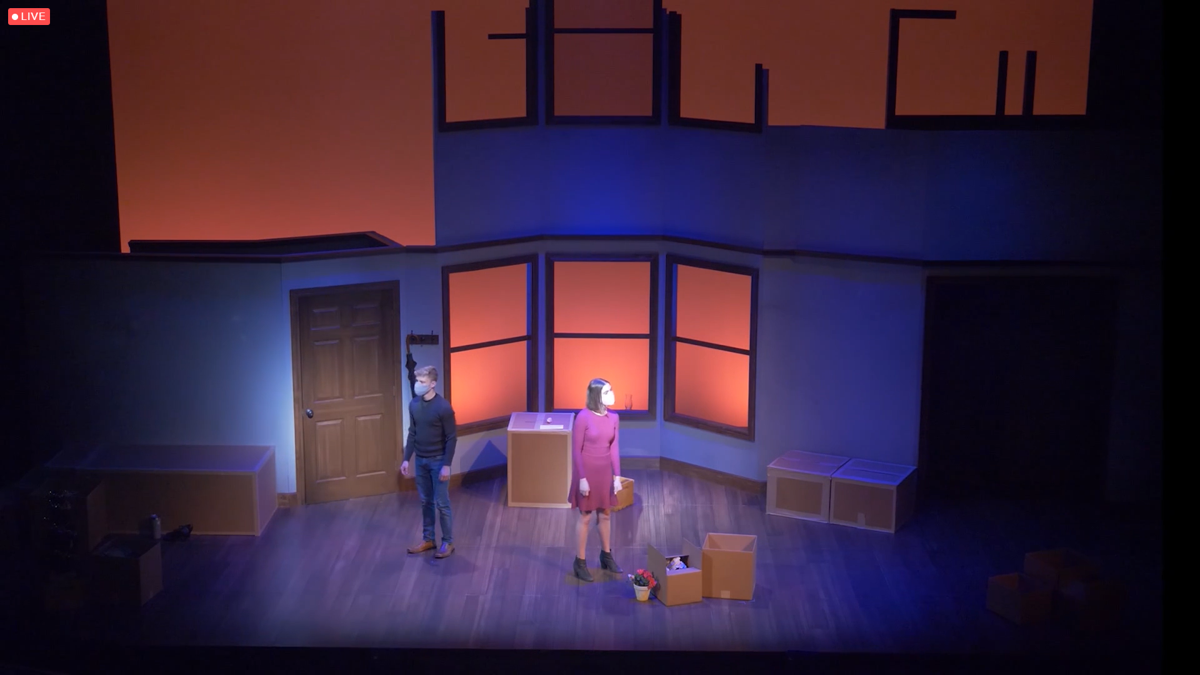 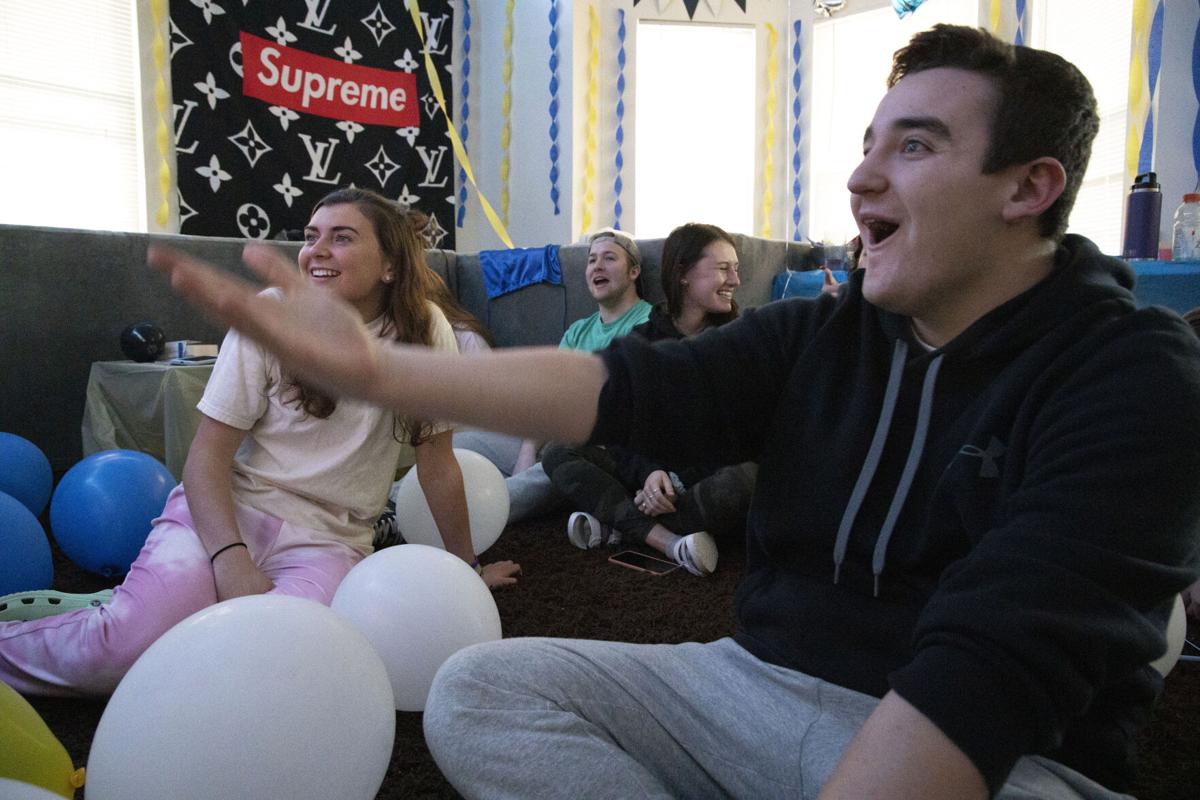 As the world dealt with a pandemic and government officials urged people to quarantine within their homes, everything seemed to come to a halt this past year — everything but the breaking news.

There to cover it all, reporters at The Daily Collegian faced protests, politics and pandemic reporting from behind their notepads and cameras.

During summer 2020, reporters on the Collegian’s summer staff tackled the first wave of breaking news since the spread of the coronavirus.

On May 25, 2020, George Floyd, a Black man, was killed by a Minneapolis police officer.

On May 31, Ashley Hayford, a current crime and courts reporter, covered a Black Lives Matter protest in State College held after this incident and other incidents of Black people being killed by police officers.

Watching the community gather to speak out against racism, Hayford (junior-digital and print journalism) said she witnessed “the passion” for social justice and equality.

“Seeing how persistent our community was regarding Black Lives Matter was really eye-opening,” Hayford said. “[It] taught me a lot as a person and as a community member here in State College.”

Hayford said she realized how important it was to cover events like protests to “make sure all the voices in the community are heard.”

Over the past year, photo editor Lily LaRegina and her staff have worked to photograph events for the community.

LaRegina (junior-photojournalism) said photographing the events is all about documenting history in a transparent way for the public.

“Just knowing we're working to memorialize [those] moments is cool,” LaRegina said. “We know it's really impactful to the community.”

Men’s basketball reporter Justin Morganstein said one of the biggest announcements in sports news this year was when Penn State men’s basketball coach Pat Chambers resigned in October after being under investigation for inappropriate conduct.

The investigation was prompted by an article released by The Undefeated about a comment Chambers made to one of the Black players about a noose around his neck.

Morganstein (junior-broadcast journalism) recalled witnessing the reactions of the current players during a media availability as they expressed their confusion over the situation.

“Probably 90% of the time that we get interviews, it's not actually candid stuff,” Morganstein said. “This was real, raw, emotional.”

Morganstein reported on this news and also covered games despite the lack of fans in the Bryce Jordan Center, which he described as a “creepy setting.”

Jake Aferiat — who has been reporting on wrestling since his freshman year and has been a sports editor for two and a half years — covered the Big Ten wrestling tournament at the Bryce Jordan Center without fans, and he said it was a special moment his senior year.

Reflecting on his four years of sports reporting, Aferiat said this year particularly proved everyone’s “resilience,” especially the reporters who kept up with coverage amid the pandemic.

“We are journalists who are students, not student journalists,” Aferiat said.

Validating the notion of continuous news coverage, LaRegina said she saw positive feedback from community members who wanted to be heard and seen through photography.

“I think people appreciate… the fact that you're still out there reporting, doing your job and you're taking time to try to connect with [them] despite everything else in the world,” LaRegina said.

Without many in-person events this year, LaRegina said she and her staff have had to adapt to the lack of access they had to many major events — including rallies during the presidential election and THON weekend.

News editor Megan Swift, who was a politics reporter at the time of the election, said she also learned to adjust to the changes this year.

“You have to adapt to everything,” Swift (sophomore-digital and print journalism) said. “I think that's also a metaphor for the news industry itself.”

Swift described the fast-paced job of a journalist — trying to keep up with breaking news at a moment’s notice — as she covered the ins and outs of the election.

“This 2020 election was arguably the most impactful election in history just because of everything that was happening with the pandemic and everything that was going on socially,” Swift said. “You had a lot of polarization [between] both parties, and I think that's really what led to this being such a beautifully catastrophic event.”

Also tasked with reporting on all things political this past fall, Swift said she had the opportunity to talk with students harboring various political ideologies to get a sense of their feelings on the election.

Swift said she prioritized unbiased reporting throughout her coverage of rallies and debates, which she called “the most exhilarating parts of [her] journalistic career.”

New to the world of reporting this year, student government reporter James Engel said he sees the importance of unbiased reporting during these times of uncertainty.

“Good and accurate reporting that is compelling but also factual and rooted in reality is a must right now,” Engel (freshman-digital and print journalism and classics and ancient Mediterranean studies) said. “You need a public that is informed.”

Like most Penn State freshmen, Engel was forced to begin his journalism experience in a time when in-person interaction is limited.

Meeting with sources mostly through Zoom, Engel said it is difficult to make personal connections with people through a computer screen.

“From what I've observed freshmen-wise, mostly people have a similar mindset of, ‘We're going to have to get through this regardless,’” Engel said.

Student life reporter Victoria Gough — who is familiar with reporting on virtual events and doing everything through Zoom — said the pandemic makes the fun and artistic events forgettable.

“In my mind, I still remember [a virtual event] as something adjacent to my Zoom classes or any of the events that I've had to cover on Zoom,” Gough (sophomore-advertising) said. “It's draining.”

From reporting on different forms of art to covering local businesses, Gough said she has witnessed the effect of the pandemic on people who just want to share what they love.

“You can tell that [artists are] pretty upset that they can't fully do what they're trying to do with their art,” Gough said. “There are tools they're grateful for, but all of them mentioned how the pandemic has been really hard for them.”

Gough said she can’t wait until she doesn’t have to mention the coronavirus in one of her articles.

News editor Jade Campos shared the same sentiments as Gough. She said she wanted to report on one of the biggest events during the school year — THON — as normally as possible.

Campos (junior-digital and print journalism) said she tried to simulate the feeling of being in the Bryce Jordan Center in person by publishing the same type of content the Collegian does every year while still accurately depicting every event.

“I hope that [our coverage] was able to make people find some solace in the fact that they couldn't get together to enjoy THON in the way they usually do,” Campos said. “Instead, they could look to our coverage and feel like things were a little bit normal.”

From the types of articles she wrote and edited throughout THON weekend, Campos said she saw effort made by her reporters and the rest of the Penn State student body to push past the limitations of virtual THON.

“It proves how tenacious our reporters are and how committed they are to getting that coverage and persevering,” Campos said. “In terms of the student body as a whole, we were able to see that, even though THON was virtual, this was still something people were really committing themselves to and [something] they really cared about.”

With the “whirlwind” of news this past year, Campos said it was fun to spend time with the other reporters in the Collegian office and get a sense of becoming professional journalists as a collective team.

It was building a similar sense of community is what columnist Caitlyn Frolo said she aimed to accomplish through her opinion pieces for the paper.

As a senior who contracted the coronavirus, celebrated her 21st birthday, received the vaccine and went job hunting during a pandemic in the span of one year, Frolo (senior-broadcast journalism) said she had many experiences to share with the community.

“My goal with a lot of my columns was to help people get through the pandemic,” Frolo said, “[so] they know there's someone else going through it too.”

Frolo said she wanted to document what it was like to be a student at Penn State during this time, and she attempted to do that by sharing as many honest experiences as she could.

Predicting there will be movies and documentaries made to portray the happenings of this past year, Frolo said the Collegian’s archived articles will become pieces of history needed to capture its essence.

“[People] are going to cite [the articles] in papers and say, ‘This is what it was like to live at Penn State during the pandemic.’”