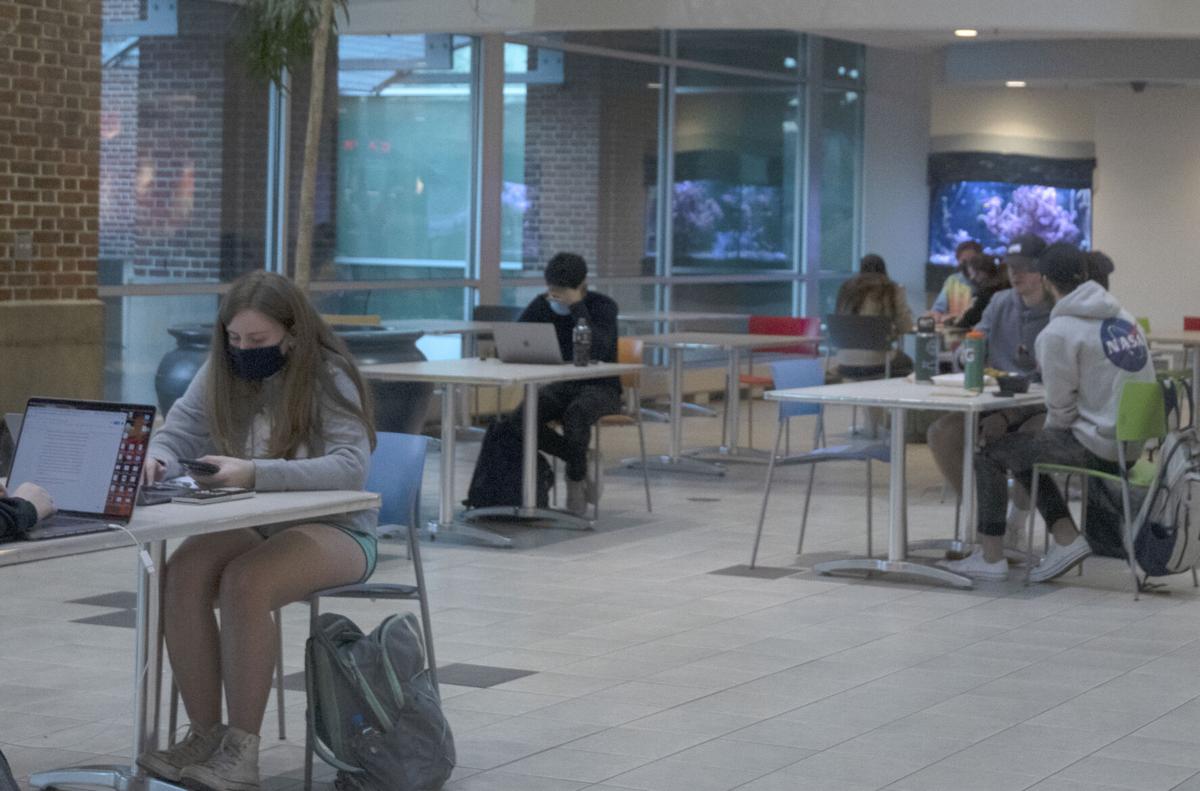 Students study in the HUB-Robeson Center on Friday, March 12, 2021. 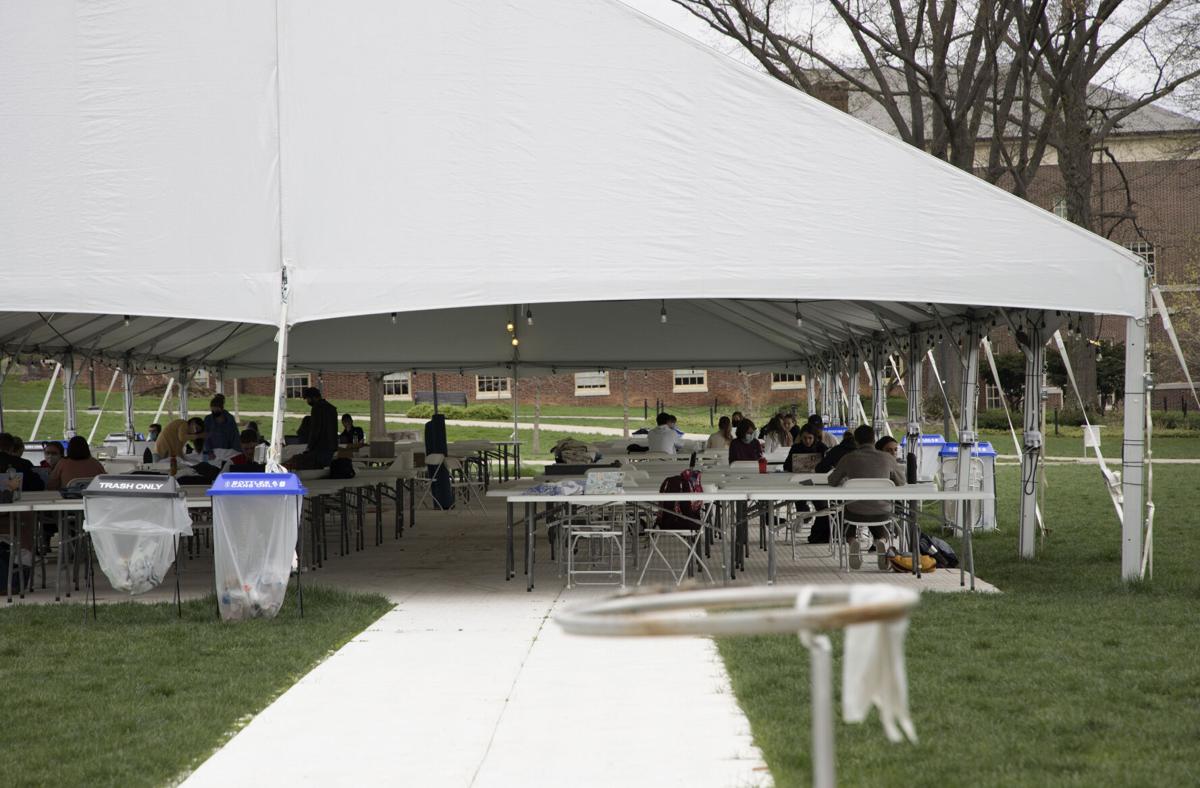 One of the white tents on campus intended for student use, erected on the HUB Lawn on Tuesday, April 13, 2021 in University Park, Pa.

While finals week has been a customary part of the college experience for decades, students have differing opinions on whether there should even be a finals week and what changes should be made to improve the stressful academic season.

Many students, including Alexis Snyder, said they acknowledge why finals are necessary, but they said improvements could be made in how exams and projects are administered.

“I understand why finals week is needed to evaluate what students have learned throughout the semester,” Snyder (sophomore-biomedical engineering) said via email. “But this semester has been extremely taxing on students’ mental health — in light of the pandemic and in the absence of any real form of a break to recover from burnout.”

Snyder said a vacation period before finals week would have been beneficial this year. A break would have aided students’ mental health and improved their academic performance due to less “mental exhaustion,” she said.

“The pandemic has definitely added to my stress and caused severe burnout by limiting the activities I can participate in that I would normally use to cope with stress,” Snyder said. “Finding motivation [is challenging since] we’ve all been in remote settings for over a year, especially when we were denied a real break from studying this semester.”

Between balancing academic requirements and personal obligations, including those directly caused by the pandemic, Snyder said finding time and motivation to study has been “pretty difficult for this last half of the semester.”

In addition to break periods before finals week — beyond the wellness days added to the spring semester — Snyder said finals week could be improved by removing specific time requirements students need to take their exams within.

“Some of my professors are having their exams be open all day, and I really appreciate that because it allows me to have more time to study properly and take breaks to minimize stress,” Snyder said.

Other students, like Camila Pena, said there are benefits to open time frames for exams — especially during finals week.

“Having exams opened for an entire day — even if there’s a time limit of an hour once you start the exam — gives you more time to coordinate your schedule and feel more in control over the situation,” Pena (sophomore-geography) said.

Even for future semesters, she said students should have the opportunity to take their “hour-long final exam between 8 a.m. and 12 [a.m.] instead of a specific time given by university administration.”

Claire Lewis said she would prefer courses to not administer timed examinations, especially for challenging subjects that require a lot of thinking and consideration.

“I can be good at math, but I have to take my time through the problems,” Lewis said. “Mathematically-skilled people can just fly through an examination, but for me, I worry if I’ll be able to finish the exam in two hours.”

Consequently, Lewis said she “thinks it would be ideal to stretch [exams] out — allowing no time restrictions, maybe a set date and nothing else.”

“I do think it’s important to accumulate the knowledge you’ve learned throughout the semester and put it down on a final exam so you know you learned that, which is kind of the whole point,” Lewis said.

However, Lewis said “the removal of timed examinations” and more class study groups prior to exams would better allow students to showcase the skills they learned over the course of the semester.

Instead of having exams with “only multiple choice answer sections,” Pena said she thinks there should be a mixture of multiple choice questions and short essay sections for all final exams, depending on the subject.

After another unconventional semester in Happy Valley, students are finally starting to see …

She said well-rounded exams — with an assortment of question styles — would “help students with different learning styles” demonstrate their skills and academic progress.

Pena said multiple choice exams can be challenging for students because they’re forced to “select the best answer,” which she said only adds frustration and test anxiety for students.

Ethan McLaughlin said he’s “never been a fan” of high school or college finals due to the added “unnecessary stress” after a semester filled with work.

“All the information from an entire semester is packed — more so [dumped] — all into one test, which is stressful on students, and I don’t think it’s a good way to assess accomplishments academically for students,” McLaughlin (freshman-mechanical engineering) said.

Based on personal experience, McLaughlin said two main changes need to be implemented into the traditional final exam formatting, both of which would improve students’ final exam experiences.

He said the exams administered during finals week should be non-cumulative, and the weight of the final exams should be comparable to the other exams and projects in a class.

Additionally, McLaughlin said “more flexibility” during exams would reduce the “pressure to do well” and allow students to demonstrate what they’ve learned “more efficiently.”

For Arden Ericson, a student in the Donald P. Bellisario College of Communications, a majority of her finals are papers and projects — not timed examinations.

“I feel like if [the university is] going to have finals, the concept would be better executed as a paper or a project rather than an exam,” Ericson (sophomore-public relations and French) said.

She said she thinks having papers and projects due at the end of the semester alleviates some stress — especially compared to the process of “studying for huge exams worth a huge portion of the class grade.”

However, Ericson said she’s still “constantly overwhelmed” because she’s not only concentrating on academics but also on her involvement in greek life, extracurricular organizations and an internship.

When she had a full schedule of finals last year, Ericson said she felt “overly stressed” with the situation and “found [herself] staying up all night — pulling all-nighters — and cramming for the exams,” which she said further harmed her mental health.

“I definitely think it’s important for Penn State to adapt and have more efficient modes of instruction and finals because I see so many people who are pre-med and other very intense majors struggling,” Ericson said. “There’s no way you can balance mental health with [the demands of finals week].”

Ericson said adjustments and changes to finals week would be beneficial for all students, especially since some people are struggling with increased mental health issues since the beginning of the pandemic.

“It’s been extremely overwhelming just keeping up with classes since the beginning of the pandemic since everything’s virtual,” Ericson said. “I feel like everything has been going too fast, especially since we didn’t have a spring break, which was not good for anyone’s mental health.”

Spreading the testing period over a longer time frame — like two weeks — may help students better manage the material, their schedules and their own health, Ericson said.

She said the pandemic demonstrated that academic adjustments and exam flexibility are possible — even during finals week.

“Since the start of the pandemic, Penn State has been forced to adapt and enforce different changes [amid coronavirus restrictions],” Ericson said, “so I think it’s definitely possible to change [the formatting of finals week] in the future.”

What began as a “pipe dream” in 2018 for Robert Fulton was the winning idea for Penn State’s 2021 IdeaMakers Challenge.

With final exams approaching and the end of the semester looming, some Penn State students take this time to reflect on their study habits — a…