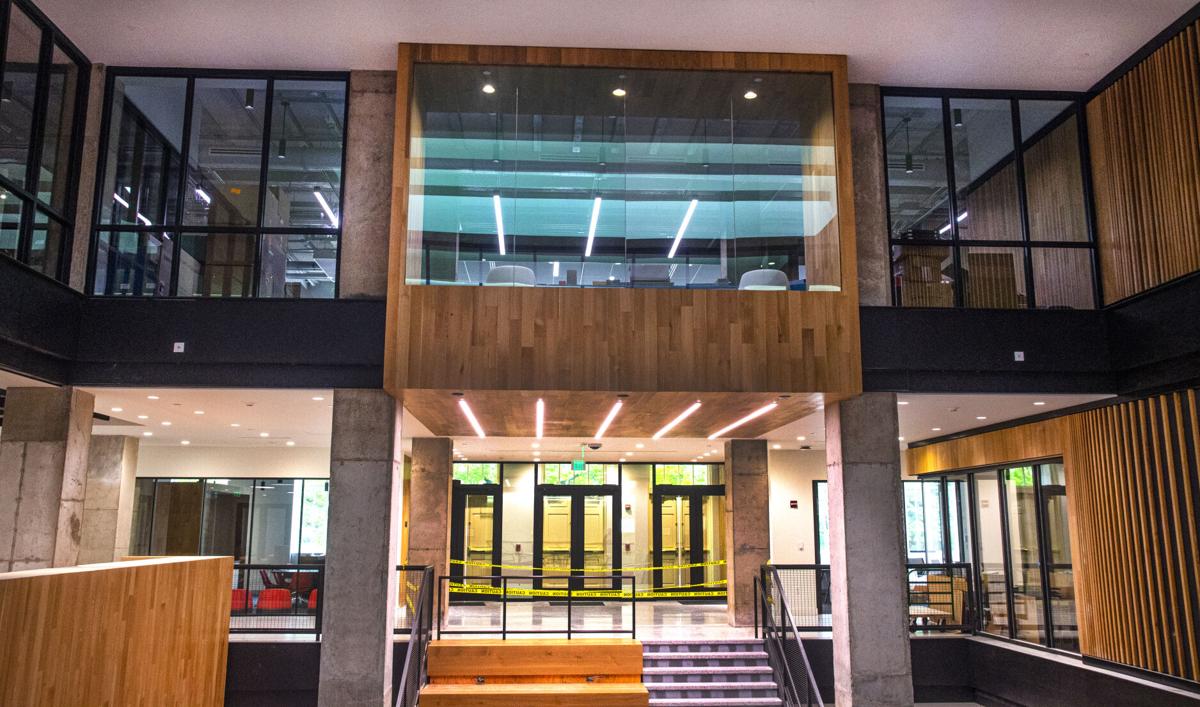 The main facade of the interior of the new Willard Building media center overhangs its central staircase on Tuesday, May 25, 2021 in University Park, Pa. The stairs are designed to look like the stairs in the HUB-Robeson Center, replacing the old stairs that existed in the building decades ago before being ripped out and converted to office spaces. 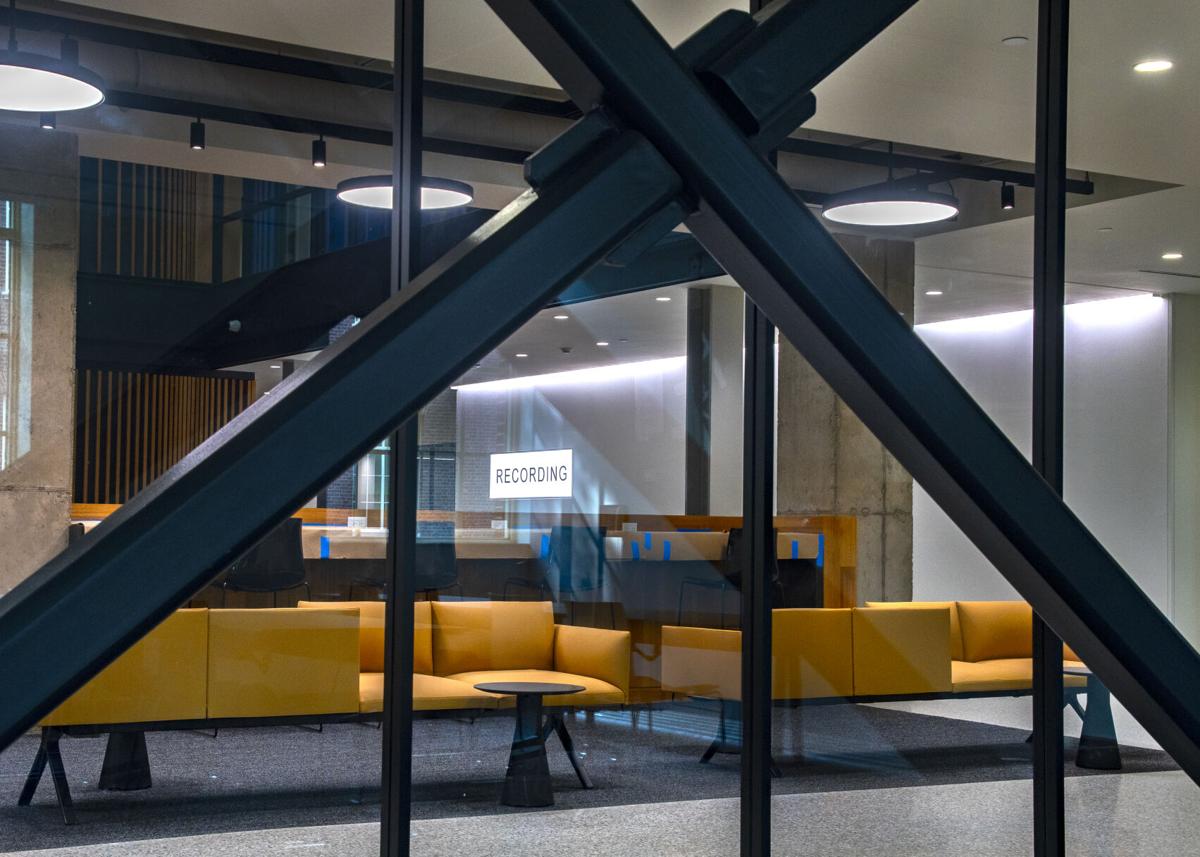 A large, decorative "X" that also serves as a support for upper floors accents the windows of the first floor multipurpose room. From each room in the center, onlookers are capable of viewing several activities happening elsewhere, including radio broadcasts, writing or recording in studios. 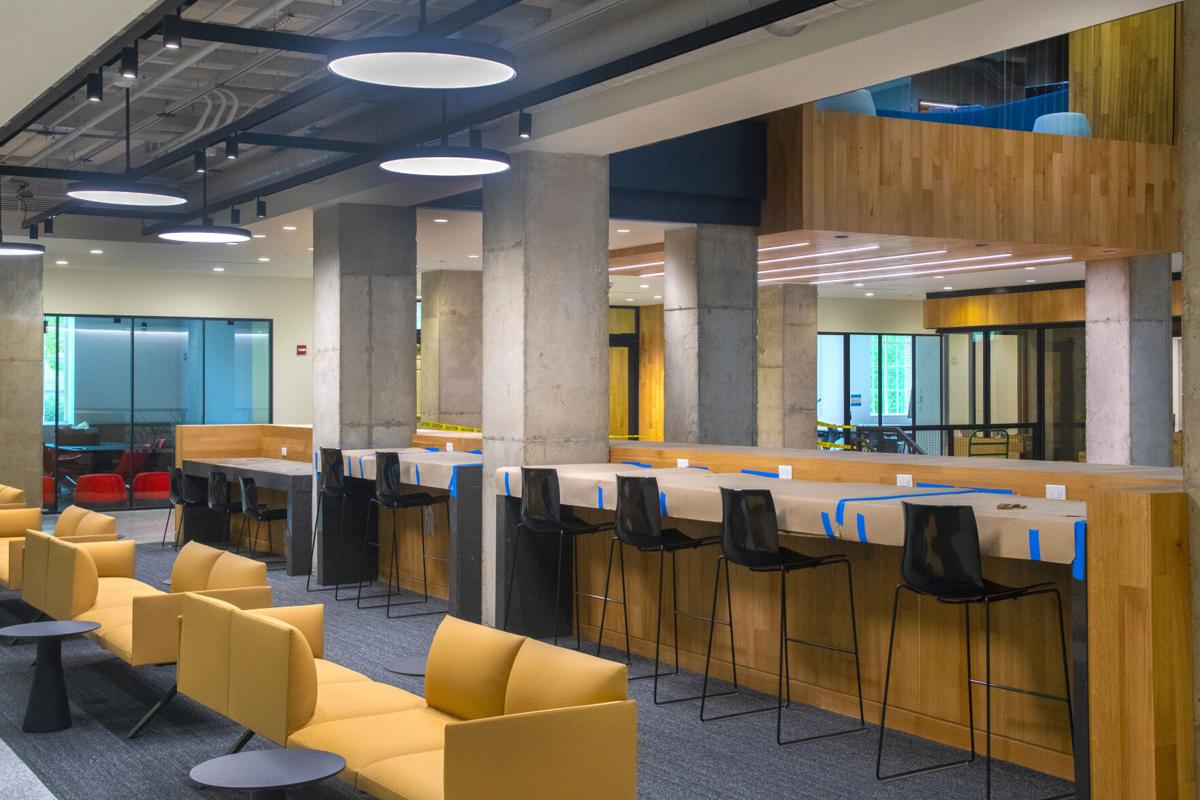 One of the main side hallways on the first floor contains several couches, stools and countertops for students to work and collaborate. A main purpose of the new building will be to foster collaborative atmospheres among students and faculty alike. 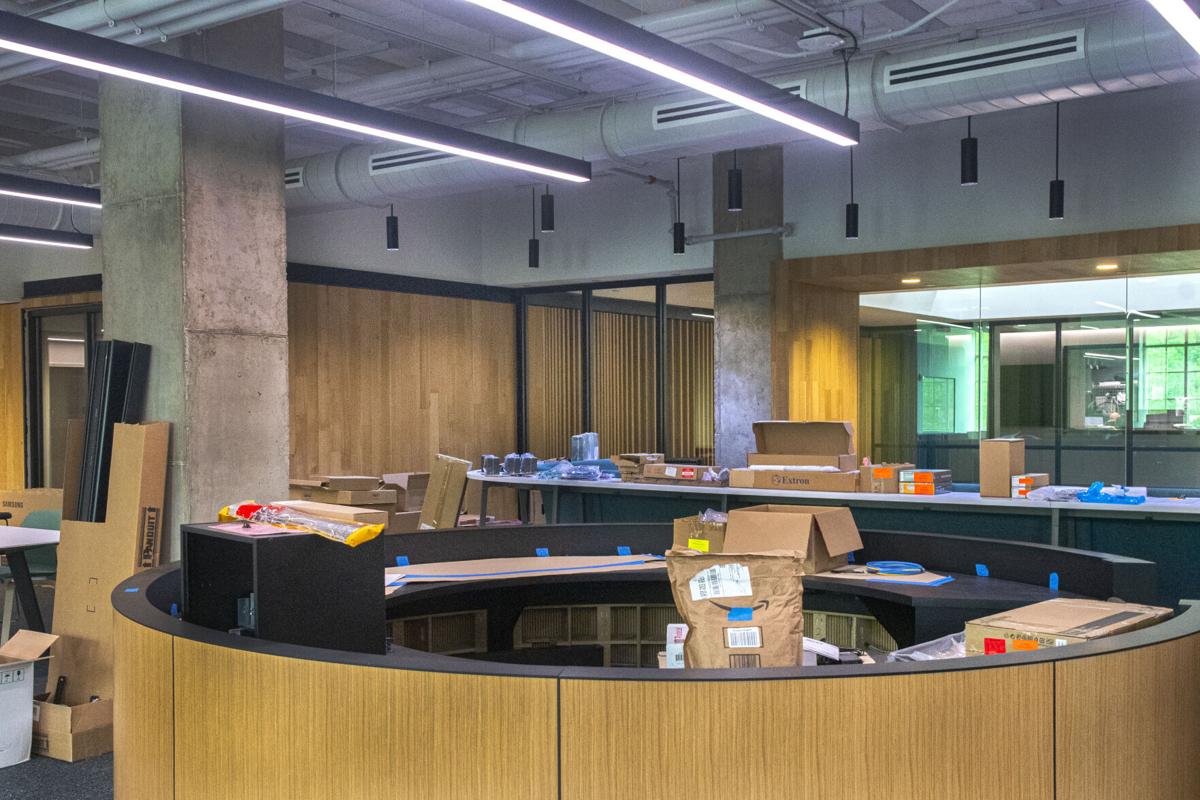 A common area desk sits in the middle of the open space on the second floor next to The Daily Collegian's new office. The desk will serve collaborative motives for the area, providing students and faculty alike with assistance should they need it. 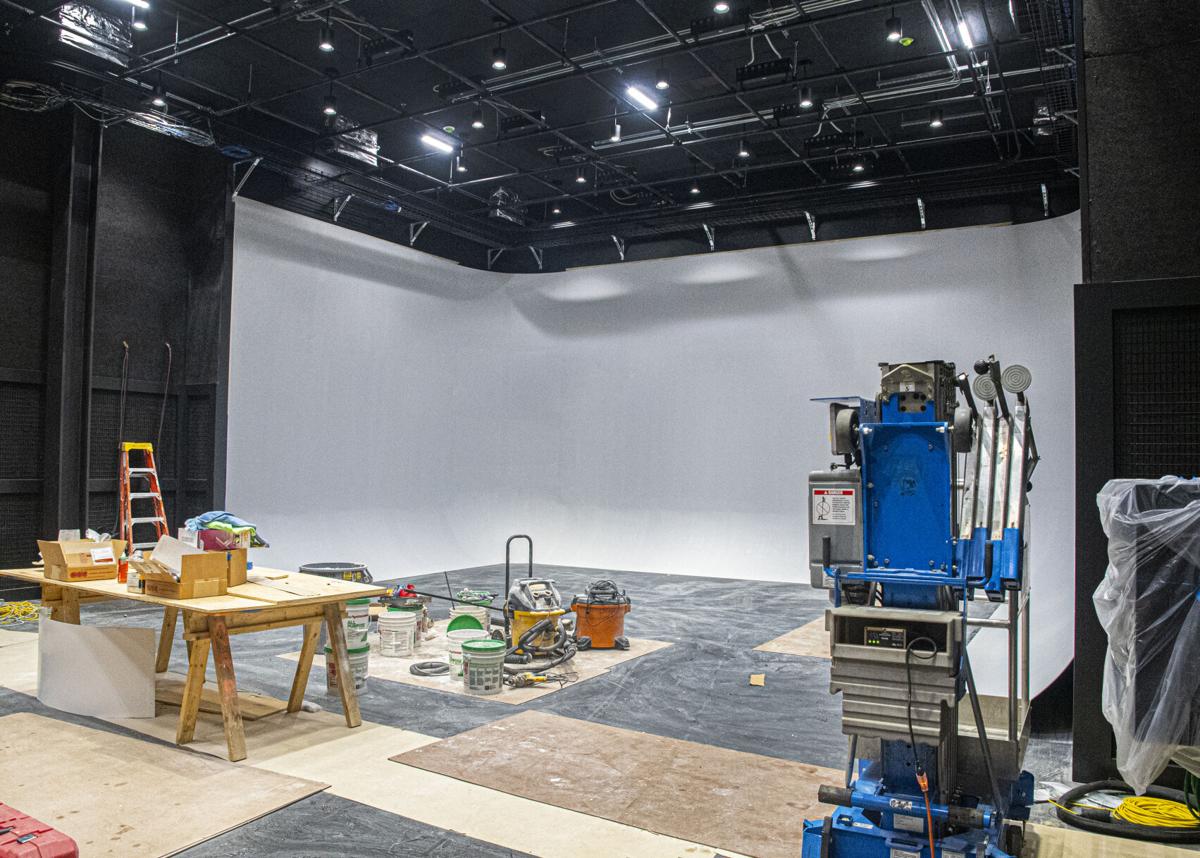 The TV production studio is housed on the ground floor of the building. The studio features a green screen, to be used for film-making or projects like music videos.

After a $48 million investment, the onset of the coronavirus pandemic and months of labor, the completion of the new media center addition to Penn State’s Willard Building is quickly approaching.

Featuring 63,000 square feet of studio space, labs, classrooms, offices and collaborative common areas, the new facility is set to officially open this coming fall semester, according to Karen Mozley-Bryan, the facility coordinator for the Donald P. Bellisario College of Communications.

“The times have changed, and I think this will allow us to move forward,” Mozley-Bryan said.

Schematics for the project allotted specific spaces for campus organizations such as COMM Agency, COMM Radio, Centre County Report and The Daily Collegian. Office space for the College of Communications was set aside on the third floor.

The project also reserved spaces for three large broadcasting studios, including a black box studio, a production studio and a TV news studio, each complete with control rooms and other technology, according to Penn State Office of Physical Plant facilities project manager Monica Reed. A studio for strategic communications will also be included, she said.

A main purpose of the project was to consolidate the College of Communications into a single area on campus. Previously, the college was spread between the Willard Building, the Carnegie Building and Innovation Park — an area located off campus that can only be reached by bus or car.

“It was transformational for the college because we were able to consolidate all of [its] spaces into one place,” Reed said.

The dispersion of the college has been a real challenge for both its students and its faculty, according to Scott Myrick, a lecturer in the college’s telecommunications department and director of operations for the new media center.

“Because we’ve been so separate, there’s never really been a way to connect or collaborate or use the technology for combining efforts and making bigger and better things,” Myrick said.

He said he would struggle to host effective office hours for his students, as his office — previously located at Innovation Park — was often inconveniently far from where he was required to teach.

Mozley-Bryan echoed the concerns of Myrick and said the college has used the facilities at Innovation Park for nearly two decades — but at the cost of student time. She said students would often struggle to travel back and forth from campus while attending classes on time.

But according to Mozley-Bryan, the new facility will fix the College of Communications’ logistical struggles.

“Now, all of our facilities are on core campus,” Mozley-Bryan said. “Time is very important to people, and [the new media center] has definitely improved that for the students.”

She said students are now able to schedule classes without worrying as much about which building or room the section will be held in.

Communications student Ainsley Adams said she believes the new space will also be useful and convenient for club meetings and other extracurricular activities.

But that isn’t all — Adams (junior-public relations and political science) said she hopes the new facility will also serve as a beacon to students interested in communications or those who don’t know a lot about the field.

“Having a lot of the equipment and stuff that certain clubs and classes need right there instead of having it off campus is going to make it easier for other students who maybe are minoring or want to get their toes wet in communications,” Adams said.

Reed concurred with Adams and said the new facility could even serve to interest students in other Penn State programs like music or arts and architecture.

“I would hope that other students are able to see what communications does, what the college does,” Reed said. “[Its] facilities will be more visible, and bringing [it] on core campus will really make a big difference.”

The college’s intended impact of the new facility won’t stop there, Reed said.

“We’re bringing more awareness to the College of Communications, which is a really highly regarded college [among] our peers,” Reed said. “I think these new facilities will help [it] to elevate [its] status more.”

For Mozley-Bryan, however, the most profound impact of the project will be its ability to promote “an explosion of collaboration” for both students and faculty members.

Mozley-Bryan said she has aspirations for large events and gatherings on the ground floor of the building as well as in some of the larger rooms and spaces on the upper floors.

Echoing Mozley-Bryan’s hopes for the future, Myrick said the new technology in the facility could allow students and faculty to remain interconnected across rooms and even floors of the building.

“We’re going to be able to do things and share resources in ways that we haven't been able to before,” Myrick said.

Both Adams and Myrick said they were enthusiastic about the “serendipitous” collaborations they said could occur in the new spaces.

Adams said she is ready to meet new people in an “area that was made for communications students” and attend classes in the new facility.

Myrick said he is looking forward to meeting and collaborating with his colleagues.

“It may be [only] at an end-of-the-year reception when you see some of these people that are your colleagues, and now you’re going to be bumping into them in the hallway,” Myrick said.

He also said he believes the new space will improve office hour effectiveness and student-instructor relations.

The transition into the new building will occur as in-person classes and activities begin again in the fall semester, and Adams said the timing will add an “extra layer” to the collaborative environment of the facility.

Though the College of Communications will inherently dominate the new building, there will also be office spaces for the College of the Liberal Arts. Myrick and Mozley-Bryan both said they are excited for the possibilities and opportunities such a juxtaposition will allow for.

But the new media center project — which was supposed to be completed by the fall 2020 semester — took an entire extra year to complete due to the coronavirus pandemic, according to Reed and Myrick.

Myrick said the coronavirus presented unique communication challenges to which he and his team had to adapt.

“It’s typical that you meet in person a lot,” Myrick said. “As issues come up on the construction site, everybody shows up, you look at it, you point at it, you figure out what the right way to proceed is, and you keep moving. COVID and social distancing really changed the way that process happens.”

In a construction environment, Myrick said, the ability to communicate by indication is crucial, and the team had a limited ability to do so.

“You have to be more intentional with what you’re doing because so much of what happens naturally when you meet in a group and point at something doesn’t happen when everybody’s in a different place and you’re looking at a screen,” Myrick said. “I think that was probably the biggest difference or challenge.”

Myrick said the team was eventually able to overcome these challenges — he said he believes everyone did a great job at paying attention to details and ensuring each team member was on the same page.

As the construction wraps up this summer, Myrick said all of the new technology should be commissioned and integrated into the facility by July 1, and finishing touches will be completed after that.

The “Extended Sunset” artistic display, which has illuminated the outside of Penn State's Ei…