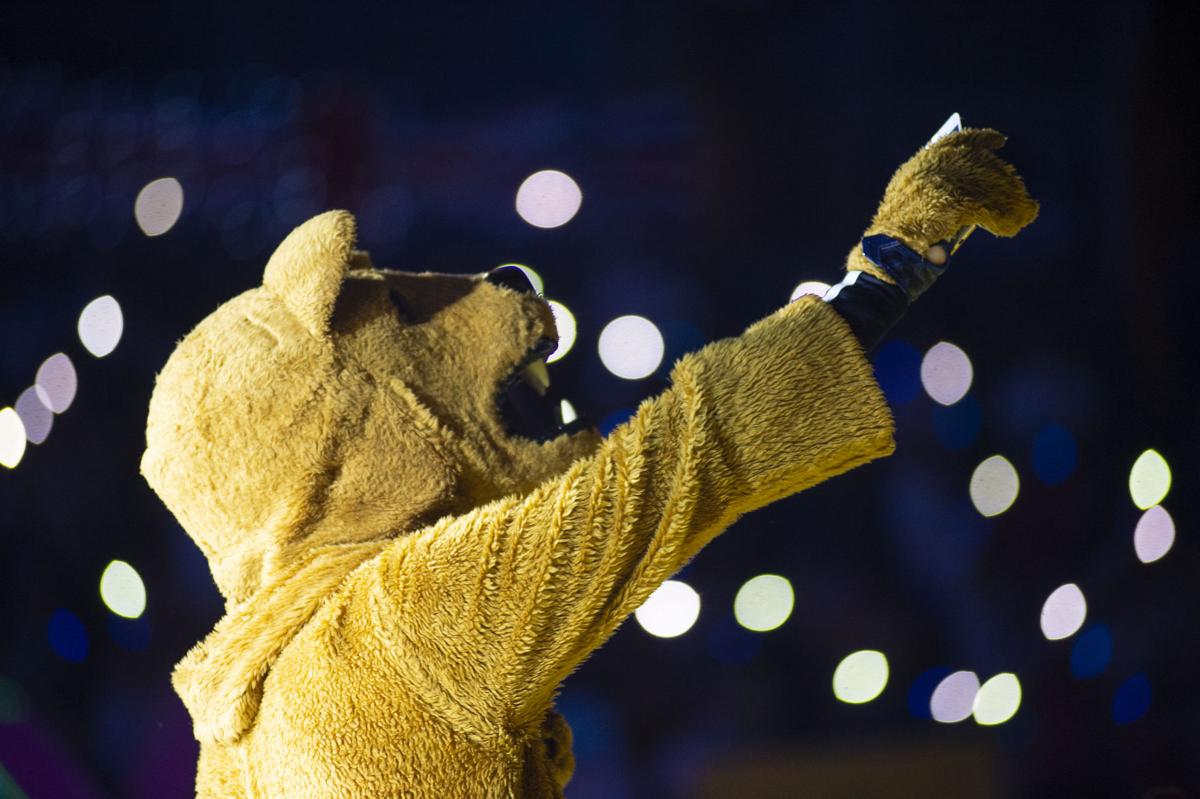 The Nittany Lion takes the stage as Cash Cash performs during THON at the Bryce Jordan Center on Saturday, Feb. 22, 2020. Cash Cash was the second surprise guest. 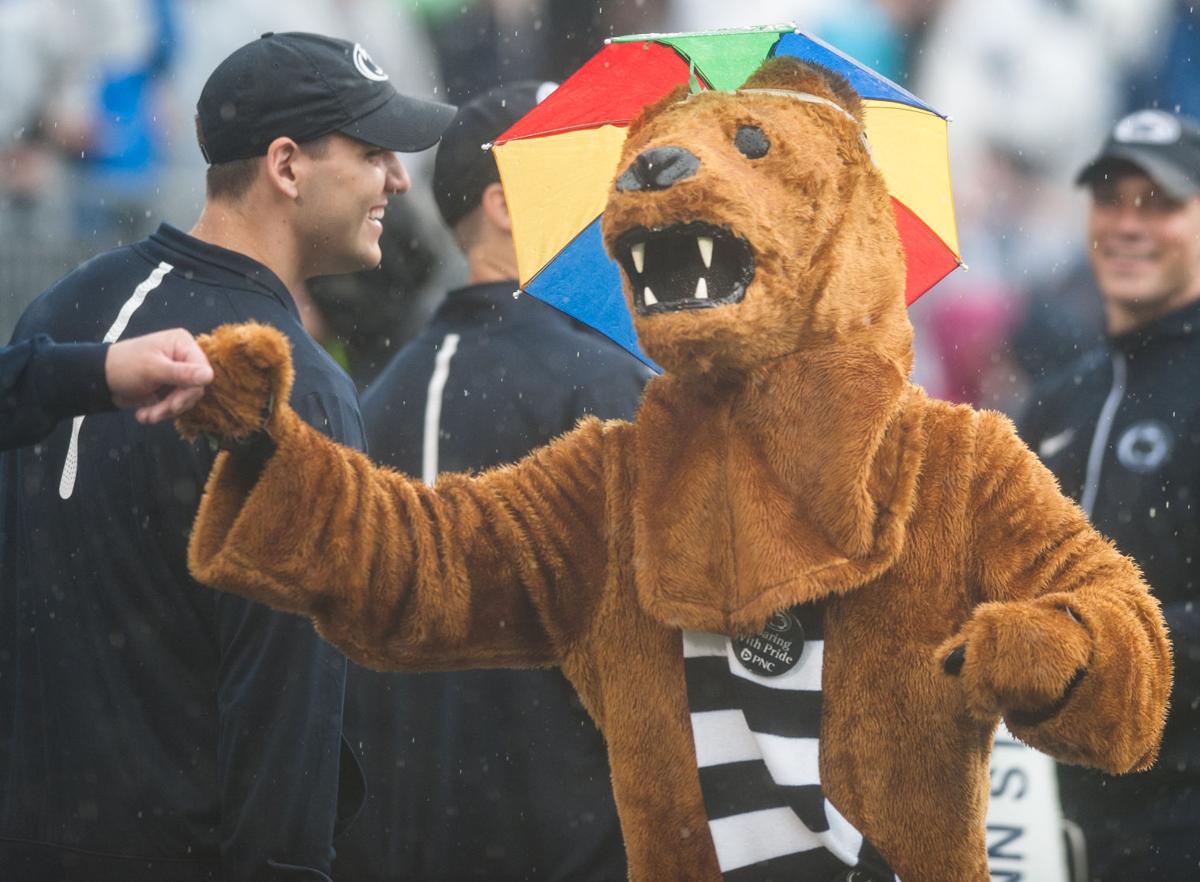 The Nittany Lion give a cheerleader a fist bump while wearing an umbrella on the sidelines of the football team's game against University of Buffalo at Beaver Stadium on Saturday, Sept. 12, 2015. 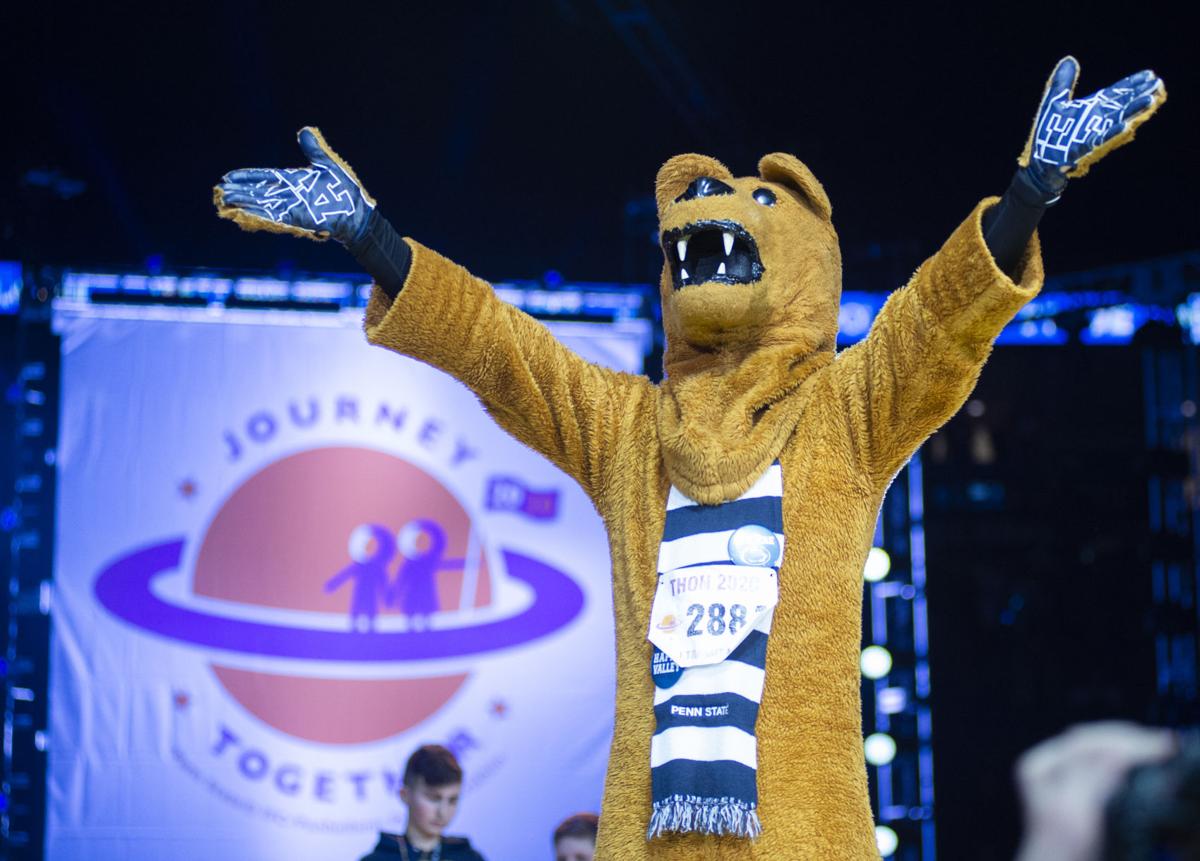 The Nittany Lion engages with the crowd during the THON 2020 Pep Rally Saturday, Feb. 22, 2020 at the Bryce Jordan Center.

Throughout Penn State’s history, the Nittany Lion has served as a beacon of school spirit, hope and optimism.

From becoming the spokesperson of social distancing to tweeting support for Penn State sports, the Nittany Lion mascot has kept busy even during the coronavirus pandemic.

In recognizing the potential hardships placed on this year’s mascot, a few former mascots shared their own obstacles as the Nittany Lion.

According to Nick Indeglio, mascot from 1996-1998, a difficult part about being the Nittany Lion is balancing schoolwork and the required appearances as the lion. Indeglio graduated in 1998 with a degree in elementary education.

“The other piece that over time became difficult was just keeping the energy level high,” Indeglio said. “Even though I was doing a lot of appearances, I still had to make time to work out for the cardiovascular piece of being the mascot, and I would frequently run out of hours in a day.”

Brad Cornali, the mascot from 1995-96, said his grades senior year definitely reflected the time commitment of being the Nittany Lion. Cornali graduated in 1996 with a degree in secondary education.

“I would do it forever if they let me because it was so fun, but I don't know how guys do it for three years,” Cornali said.

He also said he ran into difficulties while traveling with the football team for away games. Once, Cornali said a group of former Purdue Pete mascots wanted to mess with the lion during Purdue’s homecoming game.

“They ended up jumping me from behind, and I ended up punching one of them just to try to survive,” Cornali said. “It ended up on ESPN.”

While Cornali faced some physical challenges during games, the mascot from 2011-2013, Rob Nellis, faced more challenges with preserving school spirit. Nellis graduated in 2013 with a degree in mechanical and nuclear engineering.

“It was a pretty rough time for most Penn Staters,” Nellis said. “I just wanted to make sure to come back to the roots and be like, ‘Alright, what is the lion's role in this?’”

Nellis said he thought of the Nittany Lion as a symbol of “positivity, responsibility and respect,” so he made sure to attend every event he could to promote school spirit.

In the midst of the “collegiate scandal,” Nellis said he “wanted to shine some light on any and every student organization [and] community organization that was doing something positive.”

Bringing positivity to alumni also became a focus of Nellis’ work as the lion during the Sandusky case.

“[For the] people who didn't have the benefit of being near campus or having a support system, I wanted to bring a little bit of joy into their lives as well,” Nellis said. “There are so many different reasons why people go to Penn State and so many reasons why people's Penn State experience is so meaningful, and part of being the lion was honoring all of those and adding legitimacy to their experience.”

Nellis said he believes the current mascot knows to avoid the negativity and divisiveness.

“The lion is not a politician,” Nellis said. “It is a symbol of decency and respect.”

Indeglio reflected on the mascot’s role this year and also the lion’s past and future.

“I think the most important thing about being the mascot was always that you are the representative of Penn State when you're in the costume,” he said. “You literally are the university, and all of your actions have to reflect that.”

While this year’s lion has made less in-person appearances, Indeglio said he recognizes the extra work newer mascots do to promote school spirit on social media.

“I've noticed the Nittany Lion mascots really embracing social media and using Twitter to connect with the audience in ways that you couldn't do before,” Indeglio said. “While there are not traditional types of appearances, at least there's still an outlet to be an ambassador.”

Zach Sowa, who served as the lion from 2017-2020, said he was fortunate the pandemic did not interfere with his position, but he understands the difficulties the lion is facing this year. Sowa graduated in 2020 with a degree in cybersecurity, analytics and operations.

With his last performance as the lion being at THON 2020, Sowa said it was the best way to end his career.

However, the circumstances of the world today and the “tough period” following his graduation present unique challenges that new lions must face, according to Sowa.

“To go out of your way and think more creatively about how the lion can bring that energy now is going to be difficult,” Sowa said.

However, he thinks the lion will always continue to uplift the Penn State community.

“The Nittany Lion is part of me and will forever be in my heart,” Sowa said. “As the lion does, I’m sure it will come back bigger and better than ever.”

Courtney Benedetto is a lifestyle editor for The Daily Collegian. She is a sophomore studying digital and print journalism with a minor in creative writing.