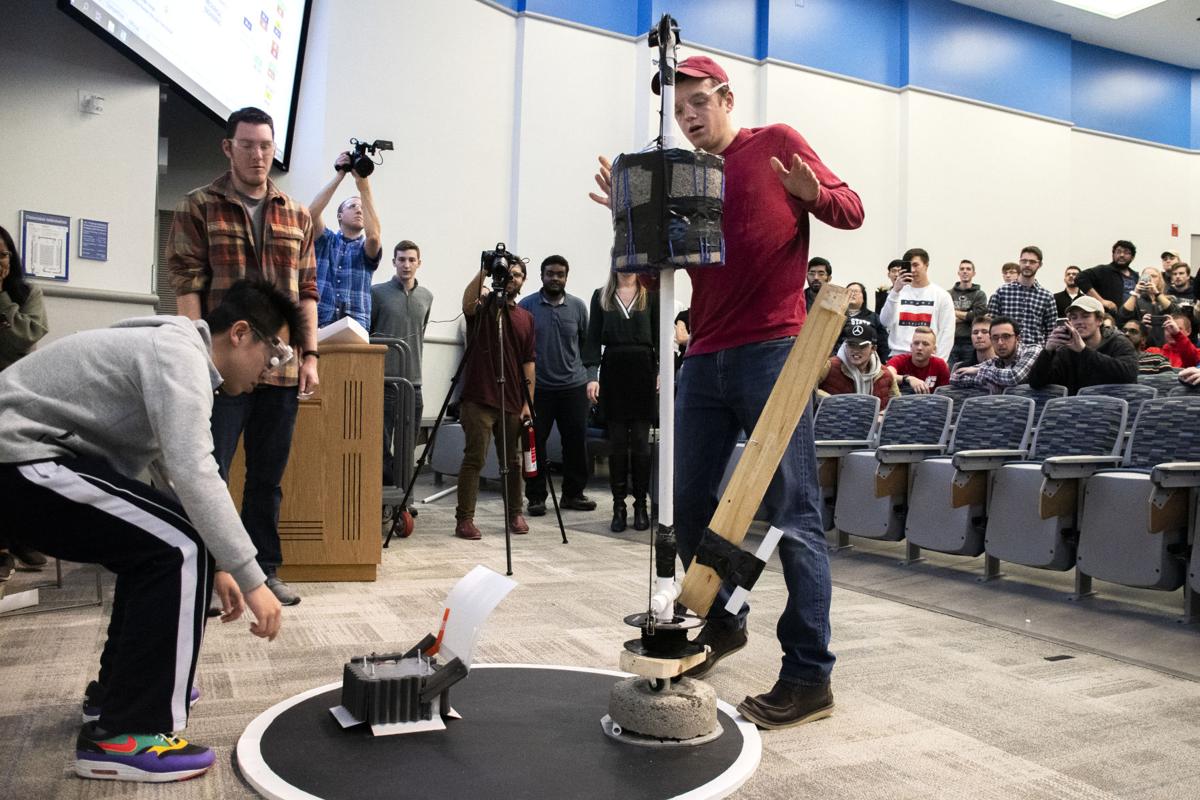 Cole Portz, (junior-mechanical engineering) right, turns on his robot during the ME340 robot competition in the Thomas Building on Wednesday, Dec. 11, 2019. 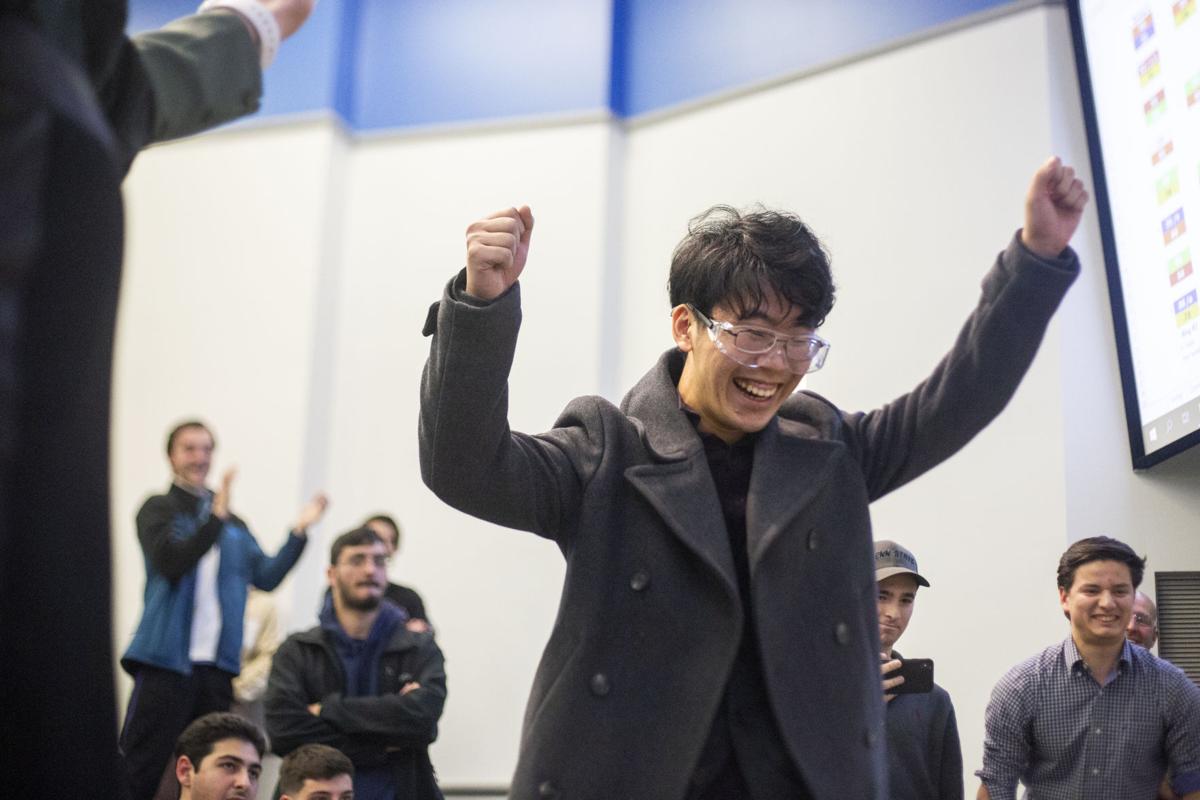 Zhieng Zhu (junior-mechanical engineering) celebrates after winning the tournament of the ME340 robot competition in the Thomas Building on Wednesday, Dec. 11, 2019. 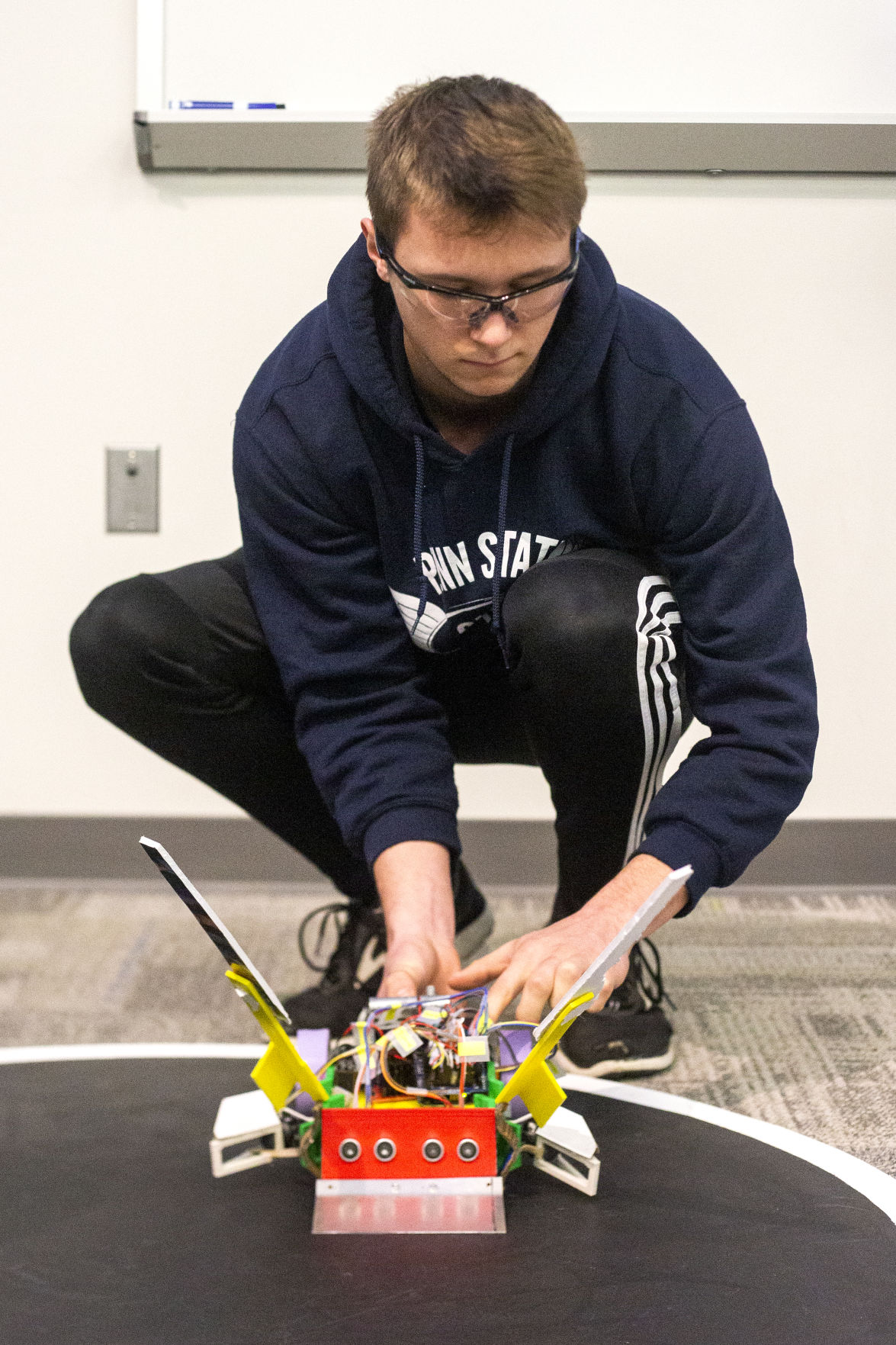 Daniel Shank (junior-mechanical engineering) prepares his robot during the the ME340 robot competition in the Thomas Building on Wednesday, Dec. 11, 2019. 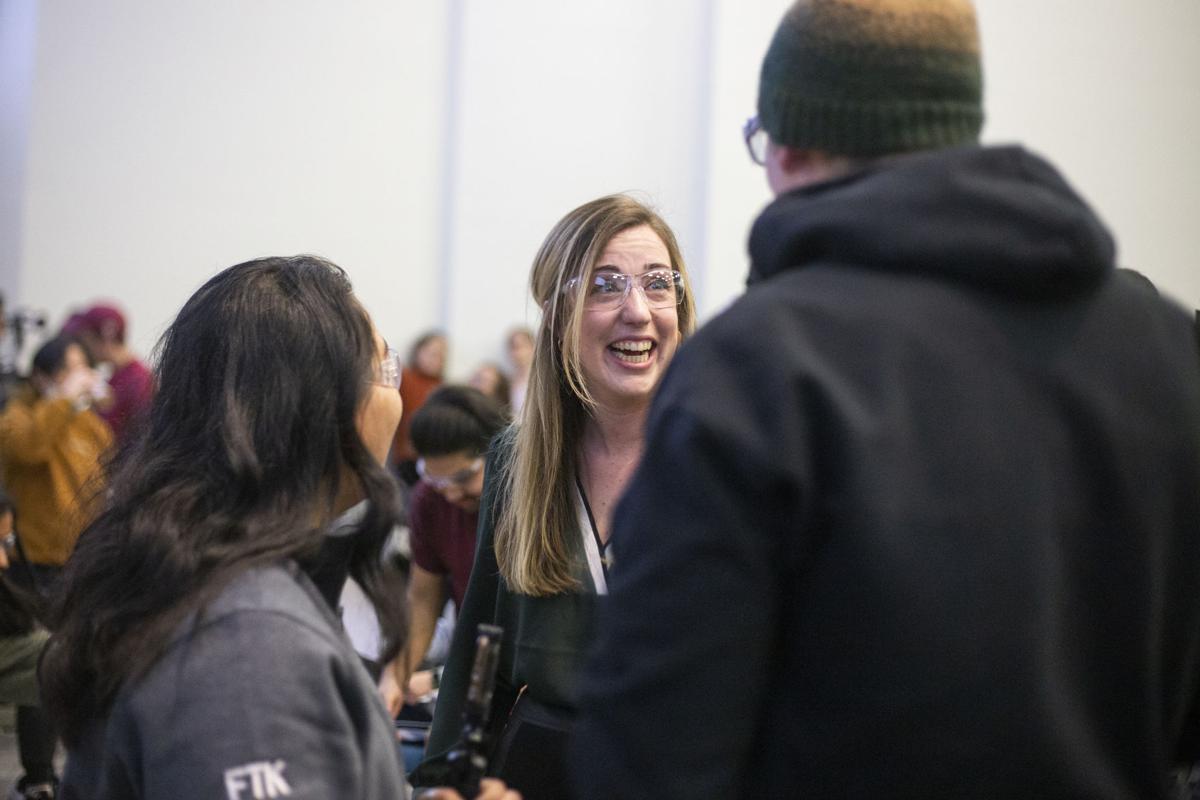 Doctor Jessica Menold, professor of ME340, reacts with her students during the ME340 robot competition in the Thomas Building on Wednesday, Dec. 11, 2019. 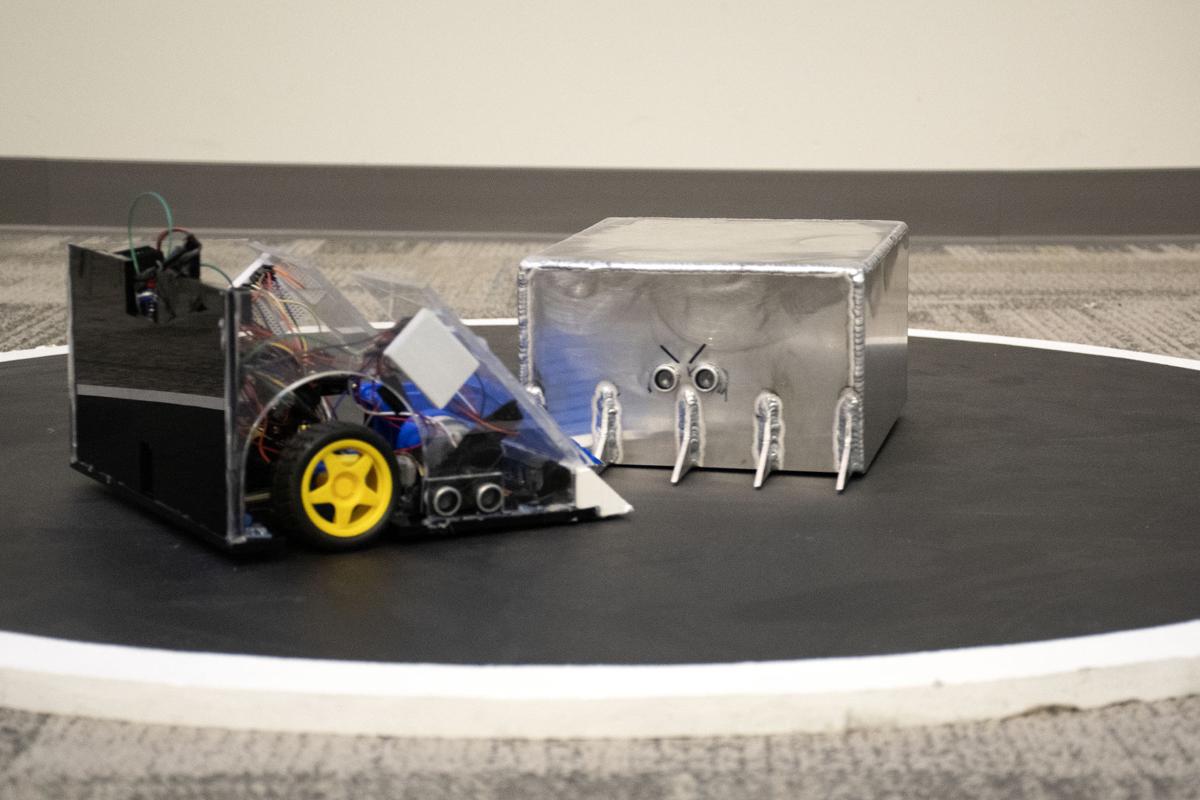 Robots battle during the ME340 robot competition in the Thomas Building on Wednesday, Dec. 11, 2019.

As the competition began, Thomas 101 ceased to be a classroom and a place of quiet notetaking.

It quickly became clear that the small ring in Thomas 101 had become a battleground between robots. Students crowded around the frontmost rows of the lecture hall to get a closer look at the clashing robots, and were loudly cheering — or, at times, booing — their robot of choice.

The Thomas Building has held its fair share of lessons throughout the years, but on Wednesdays this semester, Thomas 101 hosted a class that was far more robot-centric than the average lecture.

Professor Jessica Menold’s ME340 students were put into 20 teams and tasked with the project of crafting a sumo robot, which then went head-to-head for their final.

“You have a ring, and your objective is to push the other robot out of the ring,” Menold said. “We put a lot of limitations on it, so the students would really have to get creative and think outside of the box about how they might win. There are some pretty hefty stakes.”

The mechanical engineering students have been working on their robots from the get-go, testing their abilities in the ring as early as four weeks into the semester.

“At the start of the semester, I gave them a pretty insane challenge. I said our first competition is going to be in three weeks from now — which is crazy to think they’d have a full working robot in three weeks. But they did it,” she said. “I think it showed them that they can do this. Since then, they’ve just run with it and really done awesome things.”

With tensions and energies in the room running high among students who were waiting to see how their creations would square up against the bots of their peers, Kaitlyn McKee said she was looking forward to watching the robots battle.

“This definitely exciting,” McKee (senior-mechanical engineering) said. “We worked all semester to build a robot and we get to see if it actually works or not.”

Unfortunately, McKee’s team’s robot, lovingly named Lawnmower, didn’t make it past the second round after going against a much heavier robot.

Brock Hinton, one of McKee’s teammates, was a bit upset about the loss.

“There's a lot of quirks that our robot had — you're going to have that with any project you take on,” Hinton (junior - mechanical engineering) said. “The biggest thing is to just work through the same process, take what you’ve learned, apply it to the mechanical things you're working on, and try and come up with a solution that's simple, cost effective, easy to implement, and is reliable.”

If Hinton could travel to the beginning of the semester and give himself any advice, he would tell himself to put five bricks in his robot, a dig at his victorious opponent.

Rivalry aside, Hinton felt he was able to learn a lot from the class.

“[It is important to] be patient,” he said. “There are a lot of times you get frustrated with projects. The best way to go about fixing it is to chip away at it, one thing at a time.”