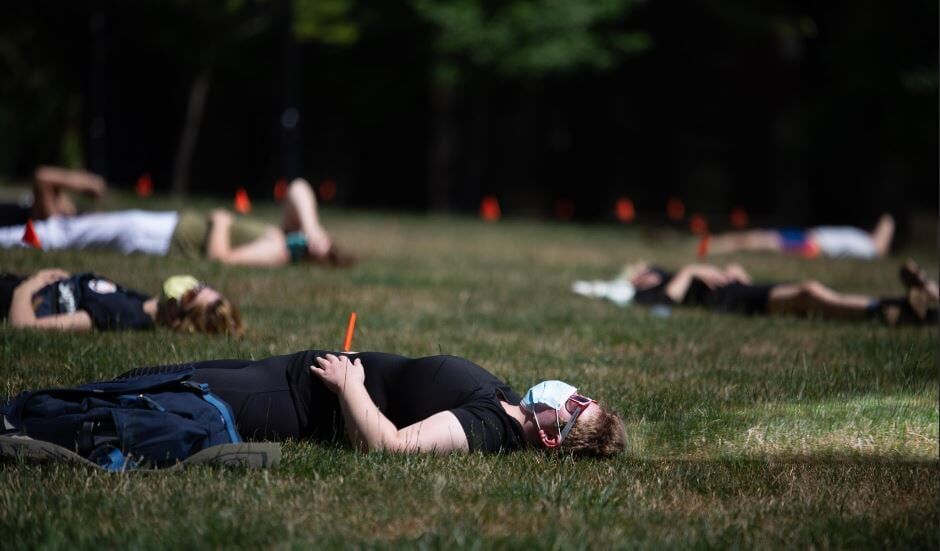 Students in the Coalition of Graduate Employees protesting Penn State's "Back to State" plans. 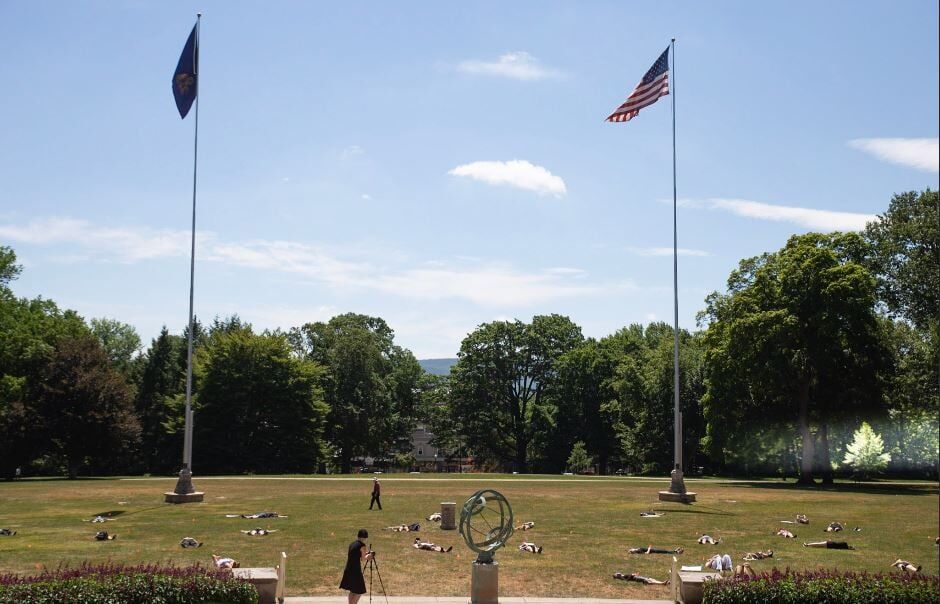 Students in the Coalition of Graduate Employees staging a "die-in" protest on Old Main Lawn. 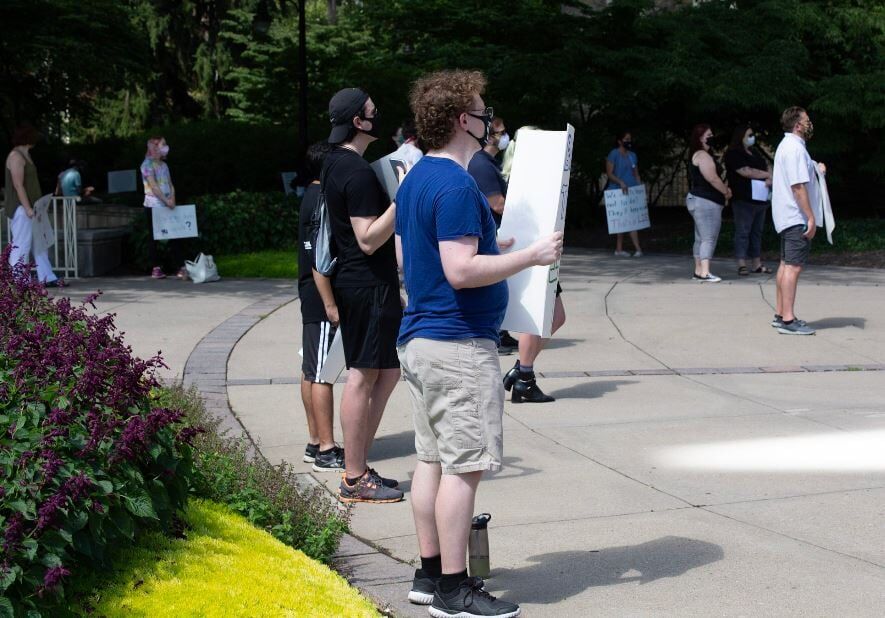 The Coalition of Graduate Employees staged a "die-in" protest outside of Old Main.

As the fall 2020 semester quickly approaches, concerns about the safety of Penn State students, staff and faculty persist.

That’s why on July 20, the Coalition of Graduate Employees sought to address some of these worries during a “die-in” protest on Old Main Lawn in which participants laid down on the ground for 13 minutes to represent the over 130,000 coronavirus deaths that had occurred nationwide.

Protest attendees feel the university has not considered the full ramifications of reopening in the fall and believe administrators should be more transparent about their decision-making processes.

Maggie Hernandez, a coalition organizer, said the group chose to protest with a die-in to demonstrate the severity of reopening in the fall. Hernandez (graduate-anthropology) called it a “powerful” form of protest that has been utilized for decades.

“If students returned, we don’t have the medical infrastructure, [which] will ultimately result in the death of individuals in the Centre County region,” Hernandez said. “We wanted to make sure the message is getting across that the university should value lives over profit.”

The coalition created a list of demands for Penn State leaders to address, one being to move classes completely online while ensuring everyone has access to remote learning.

“Invest in resources to ensure the students who are taking classes online have the resources and support they need to succeed,” Hernandez said.

Hernandez added that the organization is urging the university to release “numerical thresholds” of cases that would need to be passed in order for campus to be shut down. She described the figure as representing “how many people [university administrators] are willing to let die and let get infected” before sending students home.

The coalition’s final demand is to keep international students “at the forefront” when making decisions so as not to jeopardize their lives or education, according to Hernandez.

Bailey Campbell, another coalition organizer, said the university has been “really opaque” throughout its decision-making process. Campbell (doctorate-electrical engineering) said the group wants the university to specifically address their demands rather than release press statements.

“What we want is answers to our demands,” Campbell said.

Hernandez said there is a “lot of conflict” within the statements released by the university, specifically the notion that Penn State is within the Pennsylvania Department of Health’s outlined requirements for reopening. She explained that some local medical professionals have even joined the protest since they’re currently overwhelmed by a lack of resources.

With a large university in such a small town, Hernandez said it’s important for administrators to consider the surrounding community when making decisions.

So far, according to Campbell, the coalition has seen an “overwhelming amount of support” from the community and those affiliated with the university. She added that many people have reached out to the coalition asking how they can become involved with upcoming events and protests.

Campbell said the coalition encourages other groups on campus — such as undergraduates, faculty and staff— to become involved and amplify their voices as well.

But responses to the organization’s protests aren’t just coming from the Penn State community, either. Campbell said the coalition has received responses from students across the country who were inspired to pressure their own universities to move classes online.

However, the coalition has yet to hear an official response from Penn State. Campbell said the only word they’ve heard is the “same tired line” about organizing task forces to ensure campus-goers will be safe in the fall.

“It doesn’t matter how many task forces you have, there’s no possible way to have a safe return in the fall,” Campbell said.

The coalition also created a petition to pressure university leaders to move classes online. According to Campbell, an email is sent to 10 university administrators every time someone signs it.

According to Hernandez, the administrator said many of the coalition’s concerns were not being discussed at the university level and that they believe the university is more concerned with profit than students.

But while returning to campus is an issue that touches many people associated with the university, graduate students feel particularly concerned. As teachers, many expressed concern for the safety of their students.

Katie Warczak, another coalition organizer, said she was motivated to attend the protest after discovering a high school classmate had died from coronavirus complications. Warczak (graduate-English and African American studies) said she doesn’t want to see her students or friends suffer the same fate.

Hernandez said the university should make a decision regarding whether classes will move online sooner rather than later to give students adequate time to prepare. She said Penn State is “robbing [graduate students] of the time” to plan for remote learning and the accommodations it requires.

“We have our students in mind when we’re thinking about all of this,” Hernandez said.

Coalition organizers have been debriefing to discuss the protest’s success, and they are looking to plan future events at their next meeting. Warczak said they are also aiming to partner with other organizations on campus for future protests.

“The pressure will not stop,” Hernandez said.

After rescinding its decision to block all international students from staying in the U.S. t…

When the spring 2020 semester moved online, many professors struggled to adapt to the new format, causing confusion and a challenging end to t…

Libertarian presidential candidate Jo Jorgensen stopped in Centre County on Sunday as part of her campaign tour across Pennsylvania, in a race…