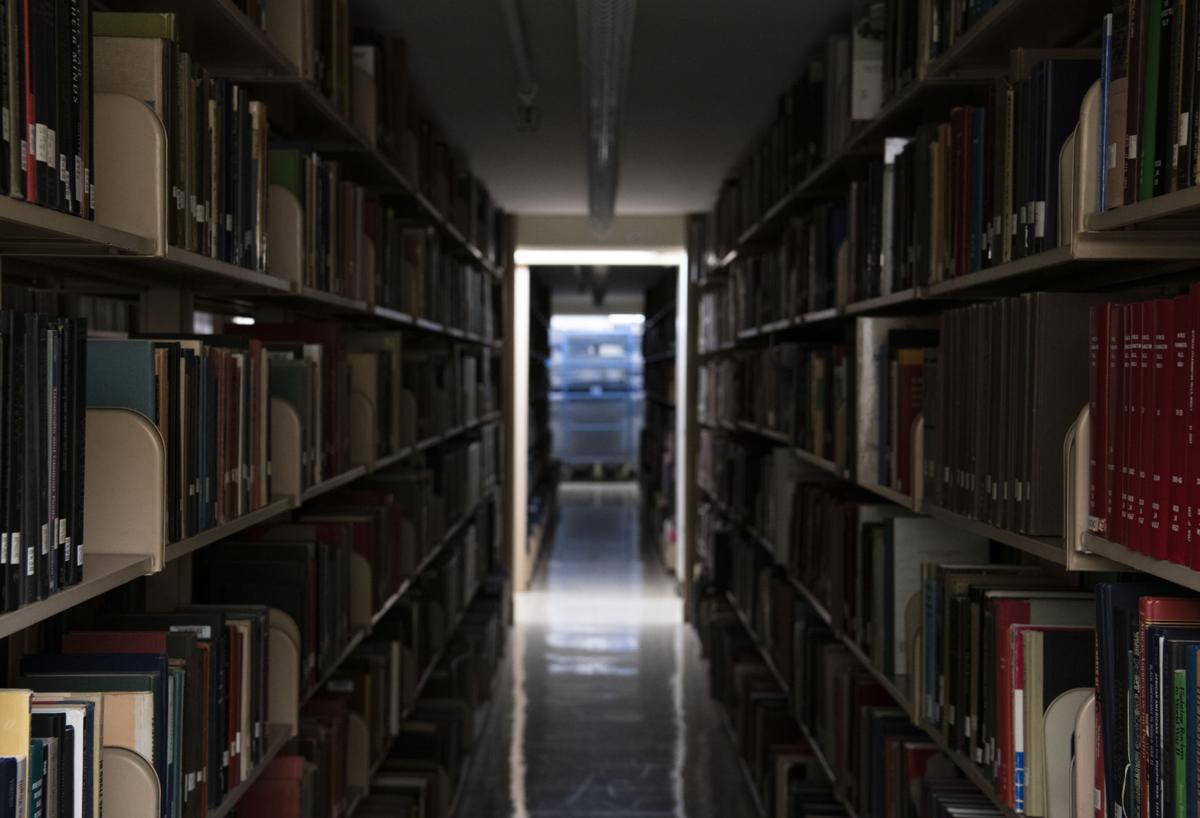 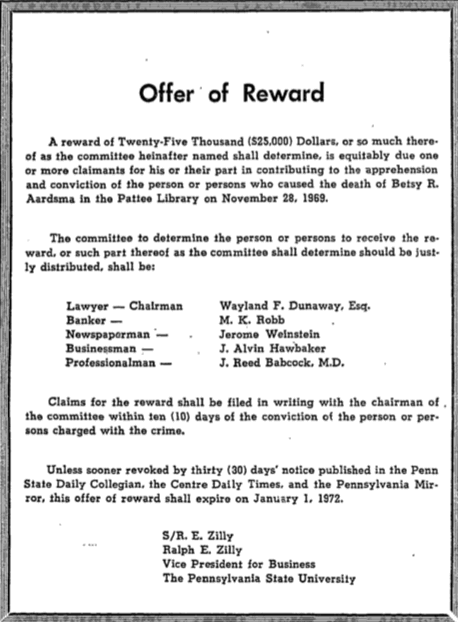 An offer of award for information regarding the death of Betsy Aardsma, as it appeared in the Collegian archives. 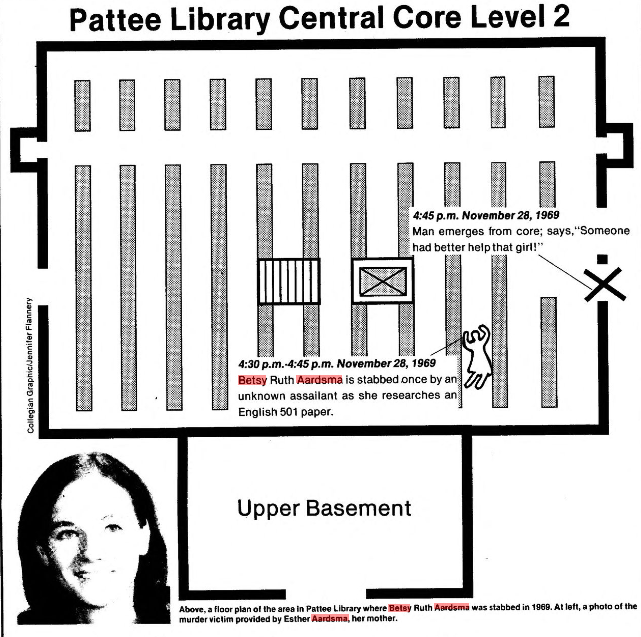 A map detailing the death of Betsy Aardsma from the Collegian archives. 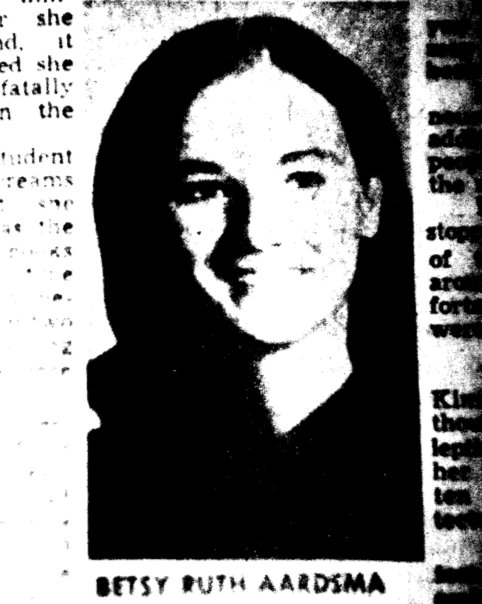 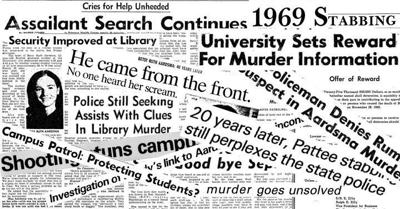 Upon arriving back to State College the day after Thanksgiving in 1969, a graduate student was murdered — and her killer’s identity remains unknown half a century after her death.

A native of Holland, Michigan, Betsy Aardsma returned to campus that Friday in hopes of conducting research for a class assignment. She was in the stacks of the Pattee Library when she was stabbed once in her heart, pulling bookshelves down with her as she collapsed to the ground. Her life came to an end a few minutes later.

Some witnesses saw a man exiting the stacks before 5 p.m. that day. The Daily Collegian reported witnesses said the man said, “Somebody better help that girl,” as he left.

Throughout the days, months and years following Aardsma’s unsolved murder, countless rumors have circulated around her death.

Some say her killer was serial killer Ted Bundy, as it was discovered he was at Temple University around the time of the incident. This theory, however, was later disproved as law enforcement did not see a correlation between Aardsma’s stabbing and the murders Bundy had committed.

Others speculate it was a man whose romantic gestures she had rejected who was angered by her dismissal of his advances.

While many people have their own theories, David DeKok, author of “Murder in the Stacks: Penn State, Betsy Aardsma, and the Killer Who Got Away,” said the answer is clear — Richard Haefner, another graduate student at the time, murdered Aardsma.

According to DeKok, Haefner showed up at a professor’s home the night the murder occurred, acting in a strange manner. At one point, the Pennsylvania State Police also believed Haefner killed Aardsma. In fact, the trooper assigned to the cold case told the Aardsma family that Aardsma’s case had been solved.

“In the end, the state police attitude toward this was very strange,” DeKok said. “It’s like they almost don’t want it to be solved.”

Although 40 state troopers conducted interviews on campus for nearly one month, DeKok said he could not find the vast amount of case documents that should have been available to the public.

“You’re going to tell me there’s no memos about this from the [Penn State] president’s office?” DeKok said. “It just doesn’t make any sense.

“Penn State did not handle this well,” DeKok added. “There should be an entire file drawer of documents, and there probably were but they’re not in the Penn State archives. That had to be a conscious decision by somebody that they were not going to make those publicly available.”

“You need to understand why bad things happen so you can prevent them from happening again, hopefully,” DeKok said.

DeKok grew up in Aardsma’s hometown and attended the same high school that she did, encountering many of the same teachers she had.

“I distinctly remember when the newspaper, the Holland Evening Sentinel, arrived on Nov. 29 of 1969 and seeing her picture at the top of page one with the story that she had been murdered at Penn State,” DeKok said. “That kind of stuck with me.”

Those who were on campus at the time left the sleuthing to the police.

Alumna Cheryl Sharpe described herself as a “naive” 19-year-old working as a clerk in the library directly above the spot Aardsma was murdered the day it happened. She said the library was practically empty, like a ghost town, as most students had not yet returned from their Thanksgiving festivities.

Additionally, Sharpe said, because it was the day after Thanksgiving, only half of the library staff was on duty. Because she was one of the newer employees, she had to work that day.

“It was kind of creepy to begin with,” Sharpe said.

While shelving documents in either the fifth or sixth core of the stacks, Sharpe, a 1974 graduate who studied general arts and science, remembers hearing two short screams around the time Aardsma is believed to have been stabbed — a spine-chilling addition to the already strange feeling she had throughout the day.

Sharpe said no one believed she heard the screams, which she believes came from the woman who found Aardsma unresponsive on the floor.

The police interviewed Sharpe and the other library employees working the day of the murder, although none of them had much useful information.

“It just scared us,” Sharpe said.

After the murder, students and faculty on campus were apprehensive, Sharpe said. She said young women were especially nervous, and an escort service was created so they would feel safe while traveling campus at night.

“We were afraid because we didn’t know why she was killed,” Sharpe said. “Everyone was afraid it would happen again.”

Students’ imaginations ran wild, Sharpe said, some testifying Aardsma was a prostitute of sorts or a nude model for the arts department — neither of which were true.

“There were so many rumors and nobody knew what the truth was,” Sharpe said.

Sharpe said security cameras were installed in the library elevators, and anyone who needed to go to the second core level had to be escorted. Because of this, staff members tried to avoid the area.

Sharpe also remembers a heavy police presence in the library for a month or two, with some areas roped off. They asked around for information, but no one knew anything, making those interviewed feel frustrated and helpless.

“It traumatized me,” Sharpe said. “I still can’t help thinking about it.”

Sharpe quit her job at the library that summer to attend school full-time. She never worked the day after Thanksgiving following the murder — even at her other jobs.

As a freshman, alumnus Hugh Roberts returned to campus Nov. 30, the Sunday after Thanksgiving, with no idea what had happened just two days prior.

Roberts, a 1973 graduate who studied civil engineering, lived in Geary Hall in East Halls. He spoke with several friends on his floor and in the Johnston Commons area, discovering the big news he had missed.

He and a friend decided to walk to the Pattee Library that night out of curiosity, although they didn’t end up going inside. For the next few weeks, Roberts said the murder was all anyone talked about — in dorms, dining halls and classrooms.

“You have to realize that events such as Betsy Aardsma’s killing in such a violent way were extremely uncommon back then,” Roberts said.

Young women were uncomfortable walking around alone at night, Roberts said, but everyone felt a bit strange actually going into the Pattee Library.

“Even then, 50 years ago, the biggest issue was the fact that the killer had not been found,” Roberts said.

Penn State professor emeritus Thomas Berner was a sophomore when Aardsma’s life ended. He worked for the now-defunct Pennsylvania Mirror at the time, helping to cover the incident.

“I was city editor the night Betsy was stabbed and so I remember getting the story into the paper,” Berner, a 1971 graduate who studied English, said via email. “While a reporter worked on as many details as he could, I called the coroner at Centre County Hospital in Bellefonte (that's what it was called and where it was located at the time) and tried to get him to tell me how Betsy had died.”

The coroner would not give Berner any information until the autopsy had been completed.

Today, many students seem unaware of the murder, only learning about it through others or through their own curiosity.

Student Brooklyn Thomas enjoys true crime, so when she came to Penn State and researched local crimes, she stumbled upon Betsy’s murder in fascination. She then read a book about it and became more enthralled.

“I’ll be talking with my friends and I’ll bring it up and none of them knew about it,” Thomas (sophomore-accounting) said. “It bothers me that there’s really nothing on campus in [Aardsma’s] memory.”

Michael Wang had never heard of the murder before, and said it is “kinda crazy” something “so horrific” happened at the university.

“It makes me curious as to the murderer’s motive because honestly, the same thing could happen today,” Wang (freshman-human-centered design and development) said.

Even after learning of the dark history in the stacks, Wang said he will not be deterred from nestling at one of the small desks to study.

“Just because it happened in stacks doesn’t mean it’s an unsafe area,” Wang said. “It could happen anywhere and I’m not just going to abandon campus because of some tragedy that happened 50 years ago.”

For many people, ghosts and spirits are generally only thought about around Halloween. But, for the members of Penn State’s Paranormal Researc…